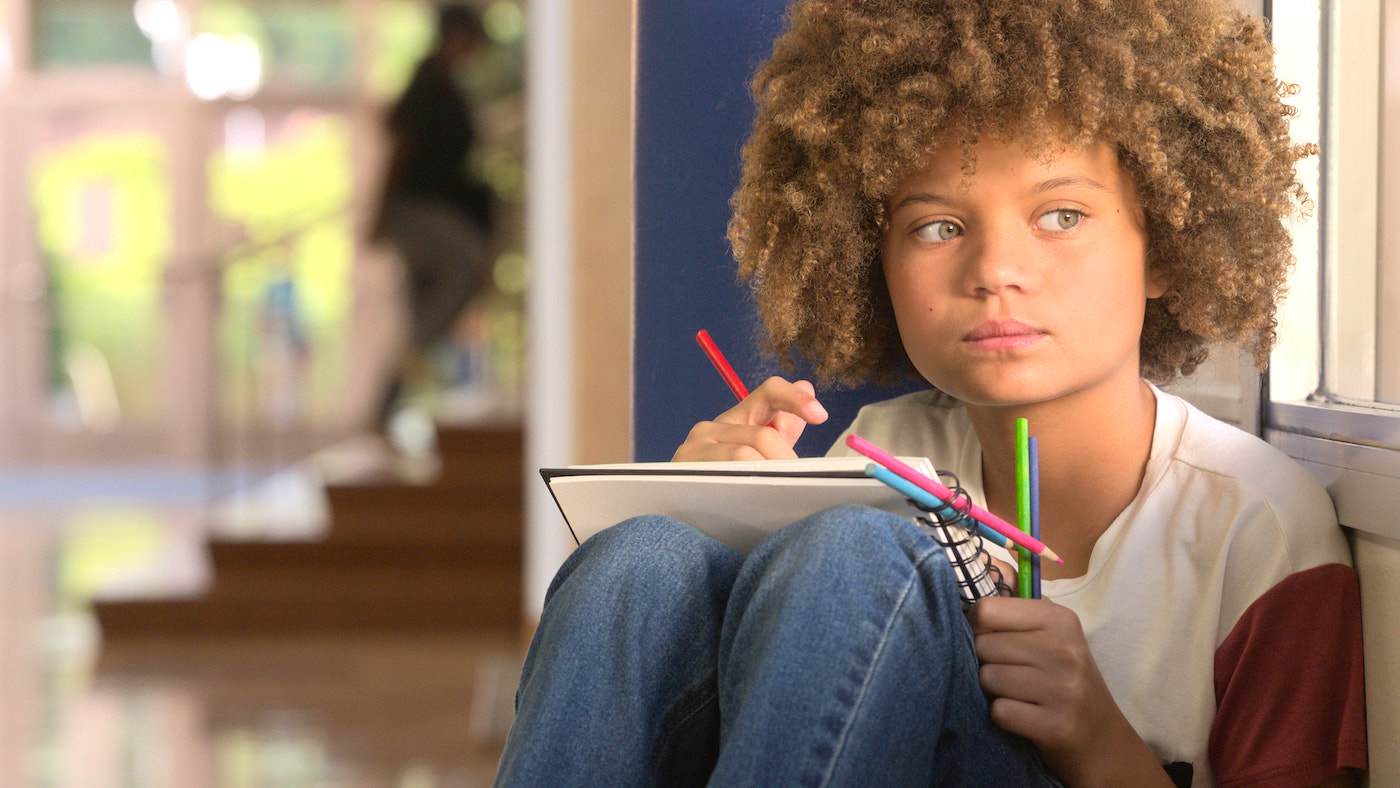 “My mom always told me there’s a ripple effect to all the energy we put out there,” recalls Bonnie Hunt, developer, and executive producer of Apple TV+’s new kids’ show, Amber Brown. “That’s true for storytelling. It affects people that greatly, so we have to be mindful. That’s what I thought about on this series because it was for young kids to watch with their parents.”

The result is a different kind of program where the parents aren’t hapless or bitter and the kids aren’t bratty or wise beyond their years, and where the colors aren’t super-saturated and the camera language doesn’t rely solely on the usual comedic tropes.

Amber Brown tells the story of 11-year-old Amber (Carsyn Rose), her two closest friends – Justin and Brandi, with an “i” – her divorced parents, Mom’s new boyfriend and Aunt Pam. Hunt developed the story from the popular children’s books of the same name, penned by Paula Danziger.

“I wanted full awareness of the characters at the top of their intelligence,” Hunt says.

The characters are multidimensional. They’re sweet and funny and smart. And flawed, of course, but in real and relatable ways. Every one of them is aware of what’s going on in their world and is trying to figure it all out – together. That last part is crucial, both to the storyline and to the production itself. Hunt is passionate about collaboration. Maybe it comes from being one of seven kids. Maybe it comes from her early career in sketch and improv comedy. Wherever it comes from, she’s great at it and looks for it in her crew.

“I interviewed DP’s over Zoom, and once I talked to Matt, I could just tell he was the one,” Hunt says of meeting Guild Director of Photography Matthew Williams. Her standards were high. On one of her early projects, 1984’s Only You, Hunt befriended legendary Swedish cinematographer Sven Nykvist, who became an early mentor to the writer-actor-director. “It’s not only about respecting a DP’s experience,” Hunt adds. “It’s about their personality and willingness to collaborate, to help you bring your vision to life. I knew Matt would. I knew that he cared.”

Williams says he’s “always loved working on projects that start from the ground up, where everyone involved is creating something new and unique.” So, he leaned into the prep time to find the correct feel and balance for the show. “I had six weeks of prep to be right there when location scouting was happening and the sets were being built, and I could relay my thoughts or ideas as they arose,” Williams remembers. “When everyone arrived the day before shooting began, there was very little that wasn’t already discussed and executed.”

Hunt had a specific look in mind – sophistication versus over-saturation. “I wanted it to be a show, not a coloring book,” she quips. Hunt, Williams, and Production Designer Konnor Jensen worked together to develop a palette of bright but gentle tones, not the usual vibrant primary colors. The hues combine with less depth of field and more shaped lighting to achieve a more filmic look.

“I wanted to use my number-one favorite camera that I’ve used for the last six years, the ALEXA Mini, as I’ve done for High School Musical and Andi Mack – both in 4K,” Williams says. “But Apple wanted to use cameras with a native 4K sensor. As far as lenses go, I wasn’t sure of the schedule giving us enough time to react quickly, so I decided for the first time to go with zoom lenses instead of primes on the A and B cameras. I chose the Fuji Premista Zooms as they had a nice organic look that worked well with the Mini LF, which suited the nature of the feel we were going after.” The smaller and lighter Fujis provided the 2.9 aperture he wanted and saved time – always important with minors on the set. He also used Canon Cine Primes for specialty shots.

“I like to pick a stop and shoot as much as possible at the stop for consistency,” Williams adds. “I decided to rate the LF at 1600 as my base ISO so I could work with a 4.0 on the interior sets most of the way. I know the larger sensor doesn’t technically create less depth of field, per se, and that moving to the equivalent lens field of view and moving the camera is a way to keep that same field of view and depth of field, but I didn’t think that was the proper way to go with this show.”

First AC Tahlee Scarpitti was surprised by the LF’s shallow depth of field. “We often had to shoot at a deeper stop than preferred to hold focus between actors that were less than a foot [separated],” she remembers. “It felt awkward to have two characters in a frame standing close to one another and neither being in focus. The shallow depth of field required Matt to add a significant amount of light to hold all the actors in a scene.”

Chief Lighting Technician John Raymer watched rehearsals carefully and would suggest changes in blocking to help accommodate coverage and its relationship to lighting. “Even though the camera is able to capture images in low light,” Raymer observes, “the advantage of raising the light level in controlled environments like stages is that it allows for actors to move freely and allows for increased productivity with multiple camera angles.”

The interiors were among the most challenging sequences due to space and budget.

Williams says he always likes to see and feel the outside through the windows where possible – keeping the feel of being in a real location and not looking like a set. “It’s not always easy to do,” he states, “and this is where I fall back on experience with the team – gaffer, production designer, scenic and greens supervisors – to help create the illusion of a real house. John and I have done this several times together and we approach things in a similar way, style-wise. That saves a lot of time to know what works best to get the look we want, as most of those decisions have to be made in prep before we ever get to light the set.”

A lot of action takes place in Amber’s bedroom and at the window that faces Brandi’s, next door. “Amber’s room is her sanctuary. It’s a world that she’s created,” Hunt remarks. The set is a mix of trendy 11-year-old flotsam and jetsam, lots of examples of Amber’s art, some ancient wallpaper, and a very cool homemade headboard (designed by Jensen).

“Bonnie wanted the girls’ bedrooms to be able to see each other on the stage, so that was something we worked on a lot to get the perspective and the look and feel of being inside their rooms but outside across the driveway talking to each other, sometimes at the same time,” Williams notes.

One memorable scene away from home occurs in Episode 2, “What They Don’t Know,” in which Amber and Brandi (Liliana Inouye) decide to spy on the slumber party they weren’t invited to. Of course, the party’s happening in an upstairs bedroom, leaving the girls no choice but to climb a tree to get a decent view of their rivals’ revelry. “It was quite the logistical event involving two different houses on different locations with a real tree, and a fake tree that matched closely,” Williams recounts. “And a way to shoot from the outside over the girls’ shoulders while they’re talking in the tree to see into the party room, a fake tree climbing rig to get the girls in the tree – also that was safe – and to make that all blend seamlessly.”

B-Camera Operator John Williams (Matt’s son) picks up the story. “We had to build a tree on the ground so we could shoot them ‘watching’ the party like they’re way up in the sky. I think we pulled it off. You’d never know they weren’t 15 feet off the ground.”

The series relies on other techniques to capture Amber’s emotions and experiences. She keeps a video diary and texts regularly, creating frequent opportunities for screen-on-screen sequences and lightweight VFX. Amber also sketches – particularly when she’s in her feelings – and those pictures often come to life in animated sequences. “The video diary lets her talk out her feelings, but in the animation, I wanted her sarcasm to come through without sounding like a bratty kid,” says Hunt, who was an avid sketcher herself as a kid. “The animated sequences are always character-driven to reveal more of the character and still keep her lovable and appropriate for her age.”

There are also moments where Amber speaks directly to the audience. Hunt originally envisioned these with a background action freeze. They talked about using a blue or green screen to control the background effect, but it was time-consuming and impractical in some locations. And it was difficult to pull off with background actors and multiple takes. Enter the CineFade, which “allows the depth of field to be adjusted without a noticeable change of the stop,” John Williams explains. They used Canon Cine Primes to maintain an organic feel. “It’s a very cool look that was a great way to make those shots stand out.”

In the sequences, Amber turns to the camera with the focus shift occurring in real time to signal to viewers that something new is happening. The trick, of course, is keeping her face in focus the whole time. “Very difficult to do at times when the lens would reach a 1.3T stop,” Matt Williams adds. Scarpitti adds that “the most challenging for focus pulling was the cmotion CineFade. It smoothly opens the stop and engages ND filters at the same time. When she returns to the scene, the CineFade resets the stop and removes the ND. It was a cool effect, just difficult to focus with a one-inch (or less) depth of field.”

Many of the camera department members have worked together before, enabling them to employ a shorthand that kept the production on schedule, despite that schedule being compressed. “With kids in pretty much every scene, we had to work fast and efficiently to make our days – and we had fewer days than usual,” John Williams says. “Our well-oiled crew and the other departments stepped up to the task and made it happen.”

“It’s great to have people I trust to help me create what I’m looking for,” Matt Williams notes. “And that’s where I appreciate working with union crew members, as it creates an environment of trust and quality standards that I rely on to do my best work. I can depend on them for good input to see something in a different way that I might not have thought of. That’s the key, having an experienced crew you can count on, as there are so many variables happening all the time. We pull together to create the best-looking show we can.”

“The crew, camera operators, and DP’s have always been my creative collaborators,” Hunt says. “They offer me so much guidance. They want to do good work and help a vision come to life. I appreciate them so much.”