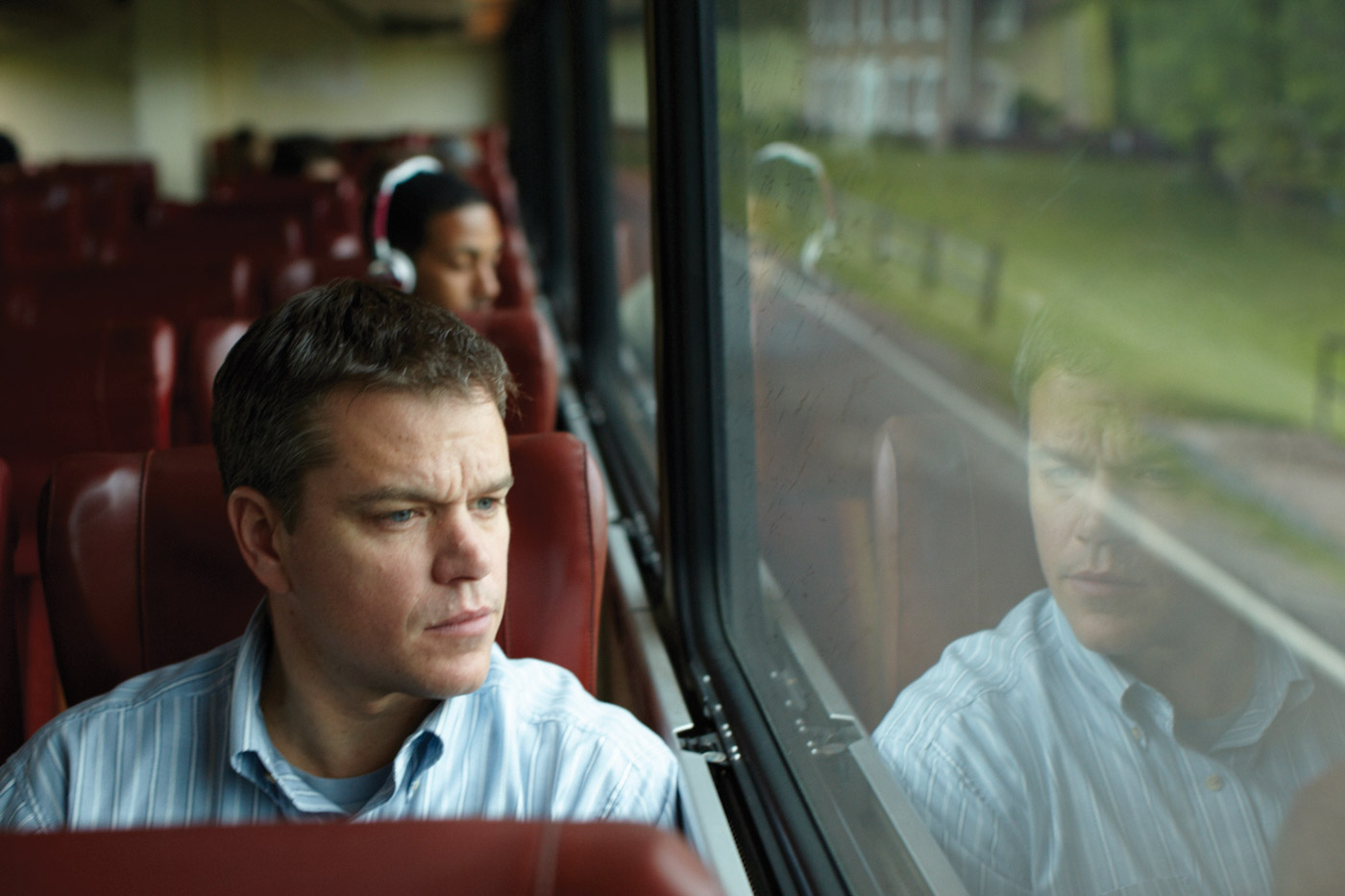 Not to be confused with the Battlestar Galactica expletive, “frak” and “fracking” are both monikers for hydraulic fracturing. High-pressure, chemically laden water is pumped into rock formations to release reservoirs of petroleum and natural gas. It was first employed in 1947, and a recent series of small earthquakes in Dallas is being blamed by some geophysicists on fracking. In the national race to become more energy self-sufficient, fracking is causing ever-greater confrontations between drillers and environmentalists concerned with ground water contamination, air quality risks and surface contamination from backflow.

The timely human drama at the heart of this controversial process serves as the catalyst for maverick director Gus Van Sant’s latest film, Promised Land, from Focus Features. Shot outside Pittsburgh, in communities such as Apollo and West Mifflin, the project was co-written by the film’s stars, Matt Damon and John Krasinski, and shot by Swedish-born cinematographer Linus Sandgren, here working with Van Sant for the first time.

Damon plays corporate salesman Steve Butler, who arrives in a rural town with his sales partner, Sue Thomason (played by Frances McDormand). Like many small towns, this one has been hit hard by the economic meltdown, and Butler and Thomason are eager to lease drilling rights from the citizens. All seems fine until respected schoolteacher Frank Yates (played by Hal Holbrook) and Dustin Noble (John Krasinski) launch a grassroots campaign to prevent the company from drilling in their town.

Topical contemporary issues and dramatic tension are the stuff at which Van Sant (Milk, Elephant, Goodwill Hunting, To Die For, Drugstore Cowboy) excels. He and Sandgren (Shelter, Snapphanar and Storm) opted to shoot on film. “Gus wanted to capture the people and farmland authentically,” Sandgren explains. “He’s also fond of the Leica camera, as well as large-format photography. He walks around with a digital Leica camera.

“As we were talking about the look,” Sandgren continues, “we came across these reportage stills, shot on 135mm cameras with Kodachrome by photographers like Steve McCurry, Mitch Epstein and Eve Arnold. We also looked at photographs from farmland America shot on 4×5 film cameras and Kodachrome stock, which comes out in a sort of silver enhanced contrasty way, but still carries all highlights and keeps the blacks dense but soft.”

The trick then became how to recreate such a specific look on-screen. Sandgren recalled testing the Vantage’s 1.3x lenses with the ALEXA 16×9, for another feature film, and began wondering about using the 1.3x Hawk anamorphic lenses with Super 35.

“We talked to Vantage Film and ended up renting all camera equipment from them because they had those 1.3x V-lite anamorphic lenses, the viewfinder and everything including the Arricam STs and LTs we used,” he adds. “We then did various tests on film stocks and ended up using the Fuji Vivid because it revealed many different colors than Kodak, and captured more from the environment that I felt would be useful in the DI. It would be nice to have all the colors of Kodachrome. But I thought the Vivid 250 Daylight, which was our main stock, was more like the old school of film. It was interesting to see the tests down at Technicolor: we tried to make the Kodak look like Fuji and couldn’t find them without decreasing the other colors; we couldn’t separate them. We also shot the Fuji Vivid 500 and on F64 Vivid Daylight. Basically the entire film is also pulled one stop in order to get closer to the desired Kodachrome look.”

When it came to movement and composition, Van Sant suggested they watch the work of Vittorio Storaro, ASC, AIC, and Bernardo Bertolucci, specifically Luna and The Spider’s Stratagem. What stood out was that the camera moved a lot but only when the actors moved. Upon further investigation, they discovered that Storaro used an Italian Elemack Cricket dolly with an Elemack jib.

“Linus found one at an auction and bought it cheap,” explains key grip Bart Flaherty. “We did have to scrounge some parts to make it work. The arm itself was smooth, and the moves were great, but the dolly ran on steel track, and you could hear it. So we tried to get the track as level as we could, and we used a lot of Steeldeck. We had about 200 feet of track on hand.”

“I had never seen a dolly like that,” adds B-camera 1st AC Norris Fox. “It was tiny and had a jib arm on it. They would set up long stretches of track and swing around for some amazing shots.”

A-camera 1st AC Jorge Sanchez says he felt like he was shooting “the way they made films 20 years ago. The Cricket dolly didn’t have a remote head; there was only room for one person on the crane. It was an interesting way to go.”

As was the decision not to employ monitors on the set. “Gus asked, ‘Can you trust your operator [Davon Slininger had worked with Sandgren on many commercials] on B camera if we shoot without monitors?’” Sandgren remembers. “I said, ‘Yeah, can you trust me on A?’ Gus was great and said, ‘We won’t worry about it. It’ll be like the old days where we see it in the dailies. If it’s bad, we’ll reshoot it.’ We didn’t tell the producers about that part, but we did feel confident in what we were doing.”

“Gus didn’t want monitors on the camera either,” Sanchez confirms, “which shaved two hours off of every day. There’s no going back, watching it, saying, ‘Oh, let’s do this.’ It was ‘We got it; let’s move on.’”

“It involved an incredible amount of trust, and I am amazed at how well that worked out,” Slininger continues. “I had to have trust in Norris, and Linus had to have trust in me. We would shoot a take and Gus would say, ‘Did you get it?’ And I’d say, ‘Yeah, I think so,’” he laughs. “It was awkward at first. But toward the end of the first week everybody started getting into the rhythm of it. Nobody was hovering around the monitors; they would just come to set and evaluate what they had to do to make it work.”

B-camera 2nd AC Deb Peterson agrees about the level of trust, adding, “Toward the end of the schedule, we were going to shoot Hal Holbrook’s monologue on the front porch of a farm house, as the sun is going down just below the trees. We wanted the light to be right, and there was only a short window. The crew set everything up and we just waited, which is very unusual. Normally you’d shoot a couple times before the light was right. But they didn’t want to jeopardize the performance. It takes a lot of confidence to wait and know that everything will come together.”

As with all of his films, Van Sant did not work from storyboards or rigid shot or camera move lists. The actors would arrive on set, walk through a scene hitting what they considered to be marks, and he or Sandgren would make adjustments. While the cast went to make-up, the crew would rig the lights and lay the dolly track.

“Every other film I’ve worked on was storyboarded and felt like you’re working to create the images of what you have already decided to do,” Sandgren describes. “Gus’s way is much more organic and spontaneous, and everybody has to step up. While you’re watching the actors rehearsing, you realize ‘Wow, this would be great from that angle.’ You would lose that if you were locked into a storyboard.”

This unorthodox approach, which underscores Van Sant’s unique station as an art-film director sojourning in Hollywood, did not present problems for gaffer Patrick Murray.

One of the more challenging was a night exterior of an entire street. “Our concept was not to do a traditional backlight – a Condor-assisted street scene with blue moonlight everywhere,” Murray continues. “We wanted it to look like the lighting was coming more from the actual streetlights, a mix of sodium vapor and mercury, onto the buildings that required a much larger cabling job than normal so that we could augment the look of the light coming from the streetlights.”

It actually ended up needing a reshoot [due to a script change], and the challenge then became to rig the street like it had been on the earlier night. “I can’t say enough about my [Pittsburgh-based] crew,” Murray continues. “I would take them anywhere in the world. Half of them, or more, were also members of Local 728 in Los Angeles, and went back home to work in Pittsburgh, which is a pretty thriving film community now.”

1st AD David J. Webb has worked frequently with Van Sant since To Die For. He revealed another aspect of the filmmaker’s method, which always strives for authenticity.

“One thing that is immensely important to Gus is that it is not a lie with the extras,” Webb explains. “If it’s the Castro [District] in Milk, you cast locals and make sure their hair grows out. So much of the authenticity in Milk is in the atmospheric work. Same thing in Promised Land. In the rural areas, the extras are all locals from the community. They’re curious and have no pre-conceived baggage, so they just act like themselves. It’s wonderful.”

And what about the authenticity of the Kodachrome-inspired look?

“What we found was that there was a lot of contrast already,” says MPC LA colorist Mark Gethin, who has worked with Sandgren on a number of commercials. “So a lot of what we did in the DI was to soften the blacks and make sure the whites weren’t too harsh. The exteriors we had to treat differently because of the colors of the countryside. We kept the saturation more than we would have for the indoor scenes. A lot of the interiors we desaturated because of the natural contrast of the film. It was really just making the image softer.”

Using DaVinci Resolve, Gethin said they used every moment of the two-week finish to ensure the audience would see the entire range of colors in the movie. “We deliberately tried to make it look like film, if that makes sense,” Gethin adds. “So often you see shots that are blown out or crushed, but with the lenses Linus used you can see so much detail there. So it was really a case of preserving that. It was a really cool project.”

Cool indeed. All interviewed said Promised Land was one of the most laid-back shows they’d ever worked on, particularly for one backed by a major studio.

“What was interesting,” Sandgren concludes, “is that on many productions, you end up over-working things. You board shots in advance and you spend time looking for those boarded shots on location. You play it back on set, over-analyze and try something else. Gus, on the other hand, likes to build a location for a character; leave the set for actors to live in. Then he encourages us all to trust our instincts and figure out things as we go. And that makes everything both focused and spontaneous, as you prep and shoot. And when you see the final film, you realize how much time and energy was won and you understand how much of creating [a film] is actually instinct.”