Like many of his generation, Ross Dunkerley’s interest in film began with Star Wars and George Lucas’s ability to pull back the curtain on the filmmaking process. Camera operating for local television studios in high school taught Dunkerley the basics before he enrolled in the University of Southern California, where he fell in love with black-and-white films and still photography.

After college, Dunkerley worked in television with then-gaffer Michael Weaver, ASC, before a generator-operator friend told him there was a slot on a movie called American Beauty (shot by the legendary Conrad Hall, ASC). Dunkerley says he “ran to the phone.” Who knew that a ten-minute conversation with American Beauty’s best boy would eventually lead to joining a long-term movie family headed by Clint Eastwood? 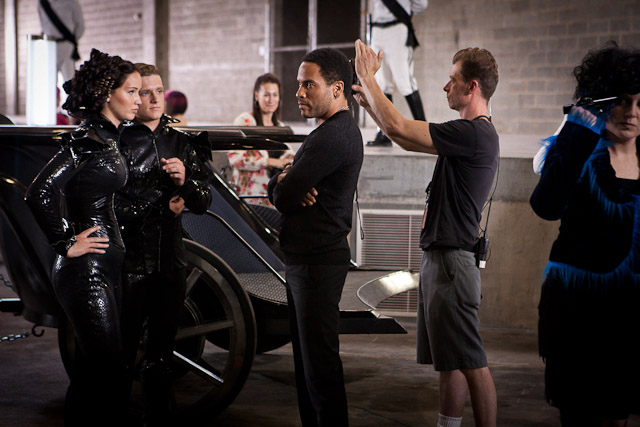 Dunkerley checking Lenny Kravitz’ light (not his hair!) on the Charlotte, North Carolina set of The Hunger Games. Photo by Murray Close

Dunkerley worked as a best boy for gaffer Tom Stern on two Eastwood features before Stern moved up to the DP’s chair and Dunkerley became Stern’s gaffer. Their work together has helped produce classic films like Letters From Iwo Jima, J. Edgar, Trouble with the Curve, Jersey Boys, and American Sniper. Dunkerley, who has always had one foot in television with shows like Malcolm in the Middle, Hello Ladies and Masters of Sex, credits his success to on-set chemistry, loyalty, and seeing his profession as a long and winding two-way street.

ICG: How important was it for you to come up through the ranks? It’s everything. I’m acutely aware of just how heavy each piece of cable and each light is. I’ve loaded trucks in the rain while the gaffer is having a drink at the hotel bar. So, every time I request anything from my crew, I’m aware of the labor and equipment required to get it done. Coming up through the ranks is an invaluable experience. 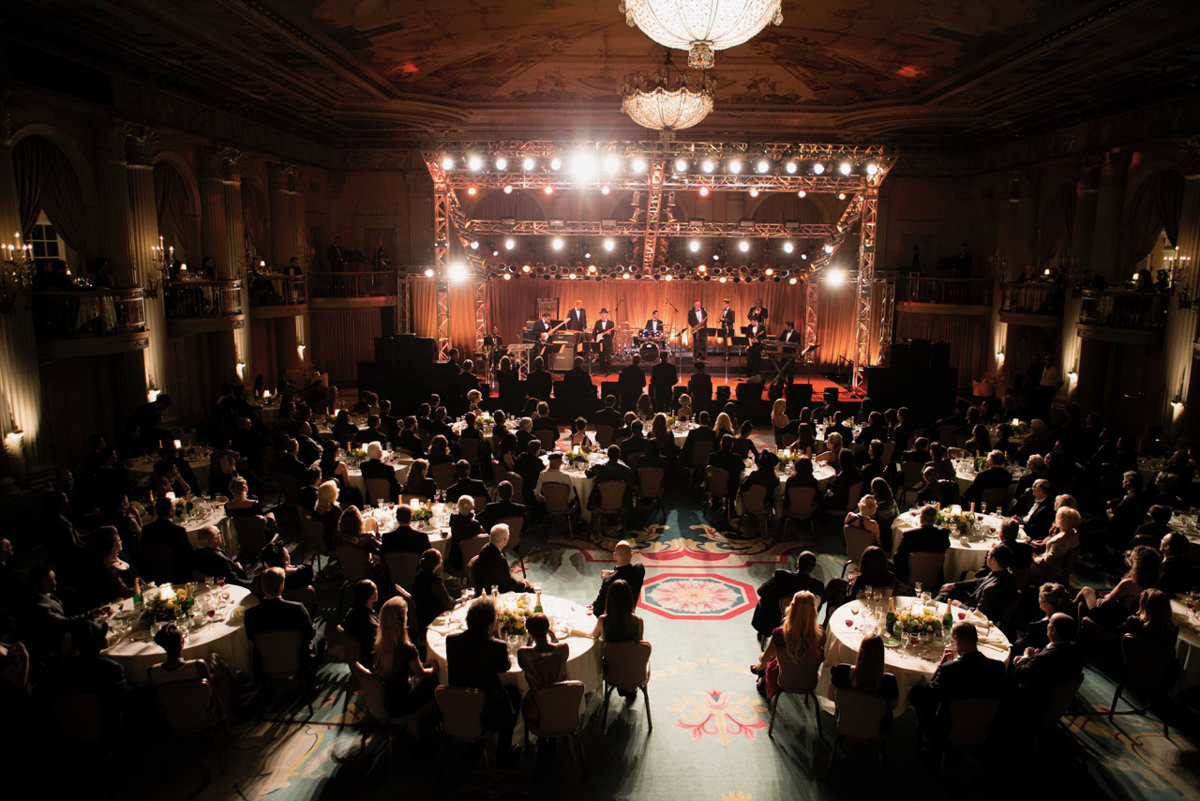 One of the many stages and lighting rigs designed for Jersey Boys recreating the Rock and Roll Hall of Fame induction ceremony / Biltmore Hotel, Los Angeles / Photo by Keith Bernstein

What is the biggest key to your relationships with your crew? Trust. My best boy, for example, is someone I have to trust 100 percent. Honesty is so important. Especially in TV, the best boy and rigging gaffer become the voice and face for the entire set lighting department. The electricians and I are in the trenches while they are in the “war room” dealing with the politics. It’s worked out really well that my primary best boy, John Lacy, is more micro while I’m more macro. John zeroes in on small, but very important, details, while I’m thinking about the big picture. We’re constantly drawing attention back to what the other has lost sight of. A very similar dynamic exists between Tom Stern and me, except he’s even more macro. I’m thinking about the next shot while Tom is thinking about next week. [Laughs.] What is invisible to me, Tom can see as plain as day. Likewise, I occasionally think I’m stating the obvious – only to find my view on a situation never occurred to him.

What do you see as the main difference between television and features? The growing and disturbing trend in television is to use two or three cameras. Coming from a single-camera feature background, this can be really challenging. It is the rare director who blocks and shoots these scenes in such a way that the lighting holds up for all three cameras. In an attempt to avoid flat lighting, it becomes a game of inches when it comes to placing the lights. There is a fundamental reason why Road to Perdition is so beautifully photographed. That film was shot with a single camera. If you look closely, that camera rarely moved. Many of the lights were actually in the shot, hidden behind furniture. Had the camera moved inches one way or another, all our efforts would have been revealed. 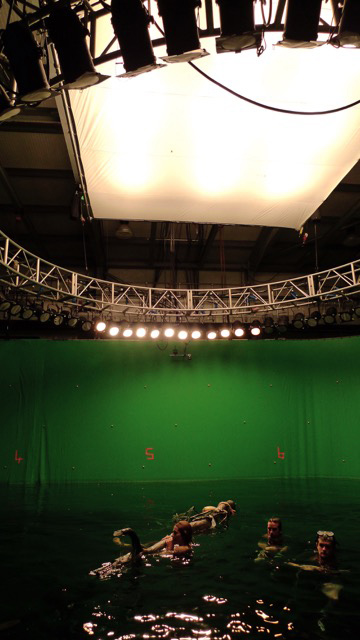 To simulate a daytime Tsunami sequence for Herafter, at Pinewood Studios, London, a high speed circular light chase was combined with a spinning VFX plate. In the final composite the camera and actress appear to be moving at dangerous speeds. In fact, they were virtually stationary. / Courtesy of Ross Dunkerley

Shooting on stage or on location – which does a gaffer prefer? I consider myself very lucky to have worked on a broad range of projects, from comedies like Malcolm to gritty material like Letters from Iwo Jima. To a certain extent, the project and genre dictate the lighting style. You try to put your own stamp on everything you do, but the quality of light cannot and should not ignore the script. Locations can also push you out of your comfort zone. I think I’m one of the rare gaffers who prefer shooting on location. On a soundstage we have the ability to remove walls and ceilings and rig lights virtually anywhere with relative ease. This can encourage a standard way of doing things and ultimately cause a fall into a visual rut. Location work forces you to embrace the limitations put before you and perhaps use them to your advantage.

You once said, “Sometimes it’s the simple scenes that kill you.” What did you mean? I often hear DP’s and gaffers talk about huge rigs and sets and how incredibly challenging they are. Honestly, it’s one or two people in a bathroom stall that can kill you. There’s a very small scene in Mystic River between Marcia Gay Harden and Tim Robbins. She walks into their very darkly lit living room while he’s watching TV. They have a couple of pages of dialogue and walk a circle around the room with a Steadicam following them each step of the way. And that was, easily, one of the most difficult scenes I’ve ever had to light. Keeping high contrast is the challenge. It would have been a breeze if we’d had fill light. Any fill light! Years later, a similar scene was being blocked in a tiny set in Prague on a French film Tom and I did. Needless to say, it didn’t get any easier. 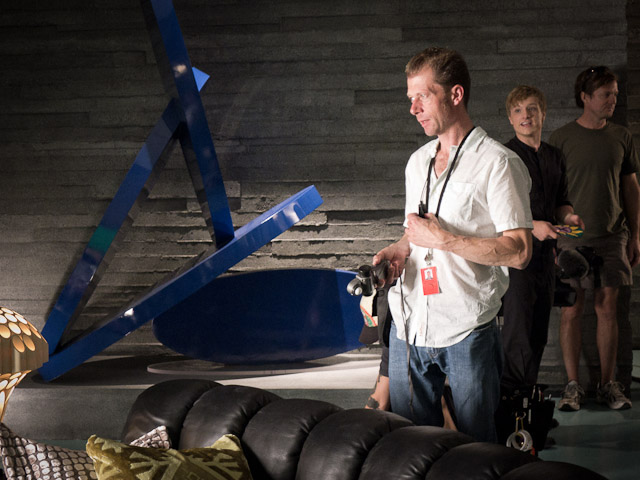 You’ve also noted that improvising with the lighting can provide a great deal of satisfaction. How so? In Million Dollar Baby, there is a brief conversation between Hillary Swank and Clint [Eastwood] in a moving car at night. Tom and I worked out where the key lights would be. Beyond that, [best boy] John [Lacy] and I rigged some small units to the car. We ran them all to dimmers on the insert car. We each grabbed a set of headphones and shared a wireless video monitor. I ran four dimmers and he ran four more. Off we went, driving around the parking lot of the Rose Bowl. We just played the lights like an instrument, occasionally plunging the actors into darkness. No cues. No discussion. Any other director or DP would have dictated every light cue. Instead, Tom and Clint trusted us to honor the scene and the actors while improvising with the lights.

Do you have any favorite lights? [Laughs.] A DP once asked me, “What was Conrad Hall’s favorite light?” My answer was, “The right one.” Despite what so many will claim, there is no “magic” cure-all light or piece of equipment out there. LEDs? I love them. When they’re right for the job. Fresnels, Pars, you name it – they all have their place. I can honestly say that a frosted seven-and-one-half-watt household appliance bulb has, on occasion, been my favorite light. Other times, it’s a 24,000-watt Arri tungsten Fresnel. On Changeling, we lit an entire sequence with skypans. Yes, a 20,000-watt skypan was once Angelina Jolie’s key light. I think photographers are pretty much born with an eye like musicians are born with an ear. But a toolbox takes a lifetime to build. I’m glad I clawed my way up from community cable as opposed to being plopped right into mainstream blockbusters. I’m not at all ashamed to embrace low tech. 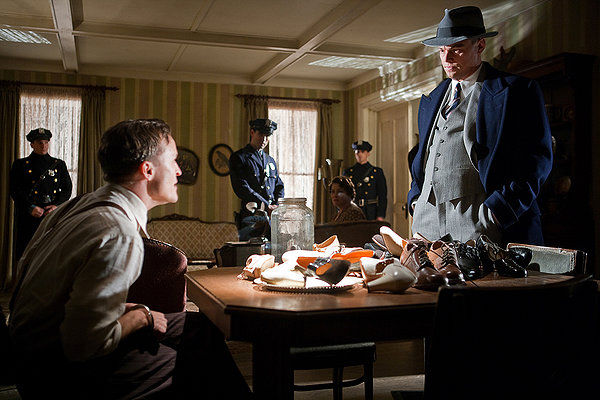 One of Dunkerley’s favorite stills from J. Edgar. “Hard light and high contrast,” he describes. “ Sadly, the scene didn’t make the cut.” / Photo by Keith Bernstein

Are you fully on the digital bandwagon? Digital cameras are amazing. They can see into the dark. Unfortunately, that’s not what I find cool about cinematography. Anyone can light a movie. Just put a 10,000-watt fixture over the lens and shoot. What’s important is what you don’t light. Maintaining the blackest of blacks is a huge priority for me. The digital medium has nurtured a very neutral position of capturing all that you can and sorting it out later in post. Wonderful as that may seem, I dread the fact that cinematographers are now leaning toward the digital safety net. Where is the artistry? Where is the risk? Where is the control? I miss the days of fearless artists.

You sound just like a DP! Is the jump to that spot inevitable? I’d love to shoot a movie. In one way or another, I’ve been shooting since I was 14. Still photography is my primary hobby. Oddly enough, I only use available light. I guess a couple of strobes are no match for a 48-foot truck full of lights and a crew to help me set them up – so what’s the point? That being said, I love what I do. I’m currently gaffing the third season of Masters of Sex with a remarkable DP, Chris Manley [ASC]. A month ago we’d never met, and, so far, it’s been an absolute pleasure. As long as the projects are interesting and the DP is talented, I’m perfectly content where I am. I think feeling challenged is the key. The projects that I’m most proud of are the ones that pushed me to my limits, and, quite frankly, were nightmares to make. But you get through it, look back, and realize just what you and your crew are capable of accomplishing. I’ve spent a big chunk of my life working alongside the best directors of photography in the industry. As long as they’re willing to work, I’ve got their back. Should they hang it up – put me in, coach! [Laughs.]

What advice do you have for young people starting out? I know it is a cliché – but do what you love and fortune will follow. This is a tough business. If money is what’s most important to you, I guarantee there’s an easier way to make it. If your heart isn’t in it, know that someone else’s is and they will work harder than you because there is a lot of competition. Also know that the technical and artistic aspects are only the half of it. A film is a pressure cooker. It will reveal the best and worst in every crewmember. Personalities and chemistry can bolster a shoot, so I would definitely tell younger filmmakers to work on their people skills. The equipment is relatively easy to master. Budgets, rain clouds, they are a nuisance. Interpersonal relations, egos, insecurities – believe it or not, these are your greatest adversaries. 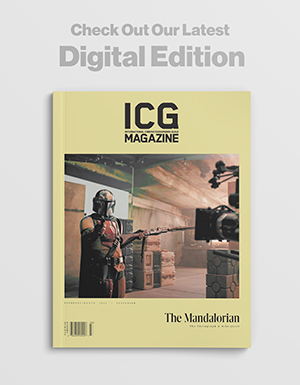