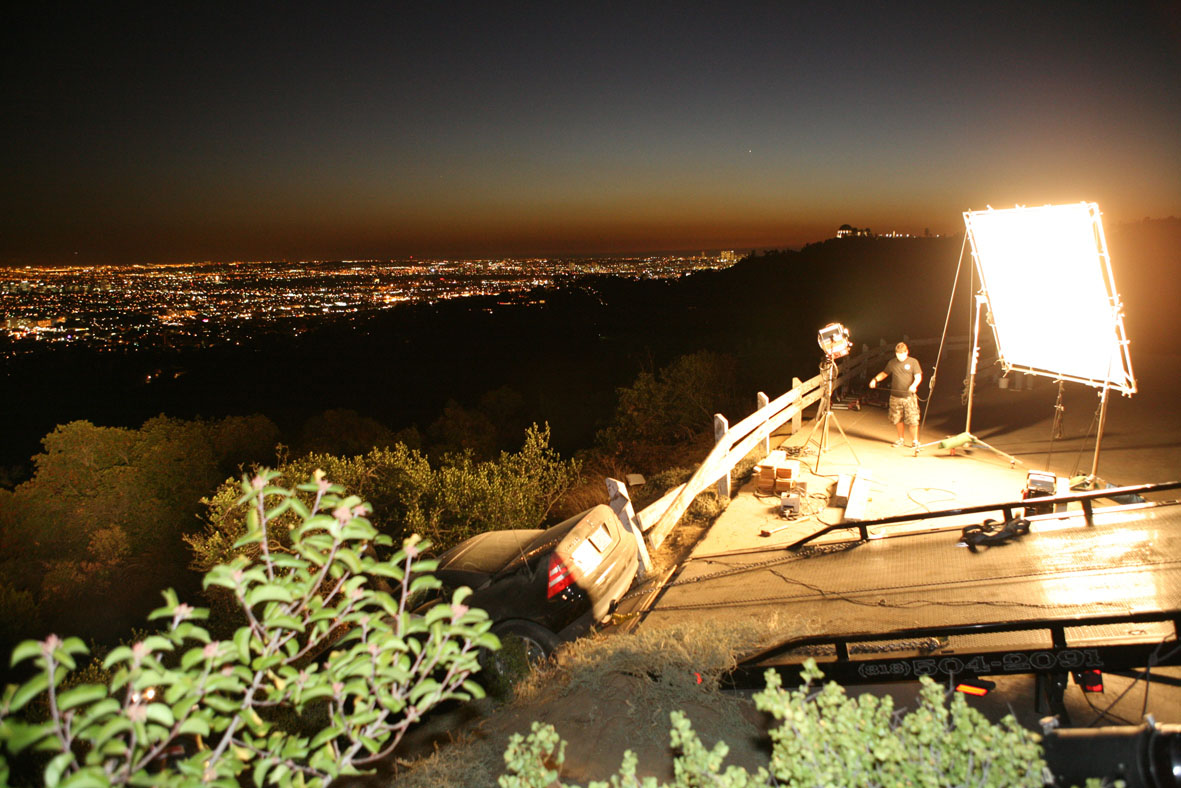 Don’t Fence Me In

We’ve reached the end of our road trip with Local 600 members, hitching our virtual stagecoach this month in the Western Region, where we find things aren’t always what they seem. Los Angeles, for example, is not Mecca anymore. Some longtime Hollywood members now report needing to travel out of town just to keep the work flowing. Southern California does have location gems still to be tapped (more about that later), but the challenges are plenty.

Operator Mark LaBonge (Castle), who has lived in the same family home near Universal Studios for more than 50 years, uses “local knowledge” to get around L.A.’s infamous traffic jams. “Although I have worked all over the country in the last ten years,” LaBonge relates, “I’ve been lucky that the majority of my work has been here. That’s why I always urge crewmembers to call in their shows, so the Guild’s local field reps [Vince Mata and Xiomara Comrie] can keep all work in L.A. union.”

Cinematographer Bruce McCleery (Battle LA, Star Trek, Super 8) echoes LaBonge’s opinion that traffic jams are the biggest negative to being L.A.-based, as does television still photographer Danny Feld (Modern Family, Desperate Housewives), who adds that L.A.’s clogged roadways leave “no time for traffic-accident surprises” on the way to a job. Both Feld and McCleery live in the urban wilds of Topanga Canyon, outside of L.A. proper. But they are two of many Guild members who must live far from easy access to the studios to be able to remain a Hollywood “local.”

The same holds true for those Guild members trying to maintain a consistent work pattern in the San Francisco area, which isn’t getting the big projects it once had. But there is, as Walnut Creek resident 1st AC Phil Bowen says, “a tight community of Local 600 members here. And every one of them knows exactly where to get that beauty shot of San Francisco from the Marin headlands, a.k.a. ‘tripod hill.’”

The further you move from California, the more things change. Operator Andrew Nancarrow describes his life in Nevada as doing “big-city work in a small-town place.”

“The locals know the locations and the quirks – and not just on the strip,” adds video controller Bob Cadigan. Further west in Colorado, commercial DP Kevin Emmons, SOC praises his state’s “unbelievable locations: mountains, plains, cities, western buttes and more. All possible to get to in one day – even moving a dozen trucks four times a day.”

Oregon-based camera operator Nils Benson (Grimm) says there’s a lot to do in his state besides work. “Like sailing on the Columbia River, canoeing or kayaking. And the music scene in Portland never stops.” Further north, Seattle Guild members working in television are “surrounded by mountains and water and breathtakingly beautiful scenery,” attests 1st AC Bob Webeck.

Every region of the West – home to big skies and even bigger weather shifts – has concerns unique to that locale. Take San Francisco’s quirky fog. It can be helpful and frustrating at the same time.

“Last week I was working on a car shoot up on Mount Tamalpais, a tall mountain with curvy roads through fields and forest with beautiful views of the ocean,” recalls Oakland-based 2nd AC Anne Lee. “On the third day, the mountain was thick with fog and the DP hated the light. Our little ‘sticks unit’ drove back and forth, up and down the mountain with the DP looking at places he had scouted. It was a while until the fog broke and we were really able to get to work. The director of the shoot had been with another operator in ‘The Edge’ arm car and had loved what they shot, so it’s also a matter of perspective and what look is wanted.”

Washington-based cinematographer Mike Vukas (Camilla Dickenson) recalls his final day working as a gaffer on an indie movie in December. “We were scheduled for process trailer work. But it started snowing and it hadn’t snowed the entire film. Now, when I say snowing, I mean 19 inches. The director insisted that we continue, so we sent the camera car out on a test drive. At the first corner it slid sideways and it took half the crew to push it out. So, the UPM finds a warehouse, the crew puts up 150 feet of blacks, the grips rig green screens, and by lunch we were up and running. We made the day, and the wrap party went on as planned. Only in Spokane.”

Then there are the stories about out-of-town location scouts, which are recounted with a smile by Denver locals, like 1st AC Tod Boyle. “We are at 5,280 feet,” Boyle smiles. “Most [out-of-town] crews can adjust fine here in town. But many times they need to shoot in the Rocky Mountain Range, which is another 3,000 to 6,000 feet in elevation. The local crews are faster at adapting to this altitude. We definitely have an advantage over crews coming from sea level. Work goes a lot slower, but we get it done.”

Boyle cites another example of why hiring local pays off. “Denver is a short drive to some of the best skiing locations in the world, and, as a 1st AC, I’m often required to get the gear quickly to that location,” he adds. “Skiing with a 50-pound pack is not easy, but it’s essential to have the ability to get to places you can only ski to, to get the shot.”

Clearly, Western Region members are made of stern stuff. Adapting to valleys, or even peaks in production patterns, like an unexpected boom in Seattle’s corporate work, becomes the norm. “Car chases, explosions, gun battles,” Webeck grins in describing some recent jobs. “I’ve worked with a lion in a grocery store and was the last person to leave the Kingdome [carrying mags and batteries for my operator] before it imploded.”

And don’t forget about L.A., thank you. Stills shooter Feld says many producers don’t even realize how much untapped beauty the region still holds. “I recently worked at the newly renovated AT&T building downtown on the top floor with its spectacular panorama of the downtown skyline,” Feld recalls. “Watching the day go by, the sun setting and eventually Los Angeles lighting up for the evening created a location ideal for photographs. I’ve done shots for Parks and Recreation at Lake Malibu and a pilot at the old cemetery in Altadena. It’s not like I spend all of my time on the set of Wisteria Lane,” he laughs. “There are many exciting locations throughout the Southland.”

“Everyone who’s gone to San Francisco to work or play has been to The Cliff House,” Bowen chimes in. “Not to mention our incredible wine country.” Emmons says his favorite Denver hangout is a jazz bar called “El Chapultepec.”

Living and eating well for Western Region members would not be possible without the job support they get from regional vendors. Washington’s biggest gear houses are Oppenheimer Cine Rental, Koerner Camera Systems, and Pacific Grip and Lighting. In Denver, Boyle relies on LSI (Lighting Services Inc.), Cinemashot and MP&E. According to Lee and Bowen, Videofax and Chater Camera highlight San Francisco’s local outlets, while LaBonge puts the legendary Panavision facility in Woodland Hills, and staffers Phil Radin and Larry Hezzelwood, at the top of his list.

Sadly, there are also longtime vendors that have fallen off the production map because of shifts in technology or a decrease in tax incentives, which, along with digital piracy, ranks among the major issues for Guild members in the West.

“We still have a great tax incentive here in Oregon,” says Benson. “So what concerns me more is the impact of digital piracy on the industry. I recently worked with Local 600 by appearing in a PSA that will run in movie theaters statewide in which we urged Senator Ron Wyden to not filibuster the bill and to support it.” Feld says he’s been upset to see “the information about tightening piracy laws on the Internet being twisted and mischaracterized. Creative copyright is very important to us,” he declares.

L.A.-based 1st AC Michael Endler (Revenge, Brothers & Sisters, Battle Los Angeles) agrees, adding, “intellectual property and how to be compensated for it remains a ‘mindset’ for many consumers. Look what happened to the music business. We have to create ways to track our property.”

“Incentives killed Spokane’s market,” states Vukas, turning to the other concern. “I’ve had to spend a great deal of time working in Portland because they still have their incentives and are working to keep them.”

“Colorado is one of the most overlooked states for locations, vendors and crews,” says Emmons, “but the State never wants to pass incentives; therefore, neighboring states have ten times the work. I believe Colorado would be a better location for numerous reasons, including the proximity of an international airport [DIA].”

Incentives are also the big issue in Washington, according to Webeck. “There’s a lack of awareness on the part of our state government of the advantages of promoting a healthy film industry locally,” he rails. “We’ve had to sit back for years and watch other states aggressively pursue incentives and rebates. When we finally passed our own in 2008, it was hugely successful in creating more jobs and awareness. It expired last year after failing to come up for a vote in the State House. We’re currently lobbying to get it renewed this year, but it will be especially challenging in our current economy.

“One of the unique pieces of our incentive program was the requirement of all participating productions to provide health insurance to all their workers,” he adds. “That helped unionize our crews, and several of our local commercial houses.”

Even Los Angeles is fighting the battle. McCleery has been involved in the effort to raise awareness about increasing and preserving Golden State incentives. “I work to document this issue,” he shares, “by capturing interviews, and participating in rallies, meetings and petitions. We need to convince legislators to extend the current incentive program [from one year] to five years, and to offer incentives to television shows that originate here, not just to those who start elsewhere and consider moving here.”

Western Region members all agree they need a little help in adapting to changing times, and, in that respect, some areas are just luckier than others.

“A nice thing about being in Los Angeles is that you have the opportunity to constantly educate yourself,” says local DIT Andy Lemon. “Vendors often put on seminars to help crews get up to speed on their new technologies, and the rental houses are open to you stopping by to look at and test new gear. It’s smart business for them as this free training time pays back as crews recommend these companies to producers.”

Training in other parts of the West can be harder to come by. In Washington, for example, Vukas says IATSE Local 488 Studio Mechanics has been trying to get something going, but there’s still a gap. Emmons says there just isn’t anything in place in Colorado, at least not yet.

How would a diary of our final road trip destination conclude? Living and working local in the Western Region means being in a constant state of flux. Technology, incentives and the fickle hand of production assure it will always be so. That’s why we asked longtime L.A. shooter Feld to put it all in perspective.

“We have to remember we’re working in an industry whose purpose is purely entertainment,” he says. “We’re working with great crews and always finding a familiar face on the set. For me, that’s icing on the cake. So is just laughing at the humor and the wonderful actors that bring scripts to life. It’s a special privilege – wherever you are.

“What other job allows you to have such a good time at work?”