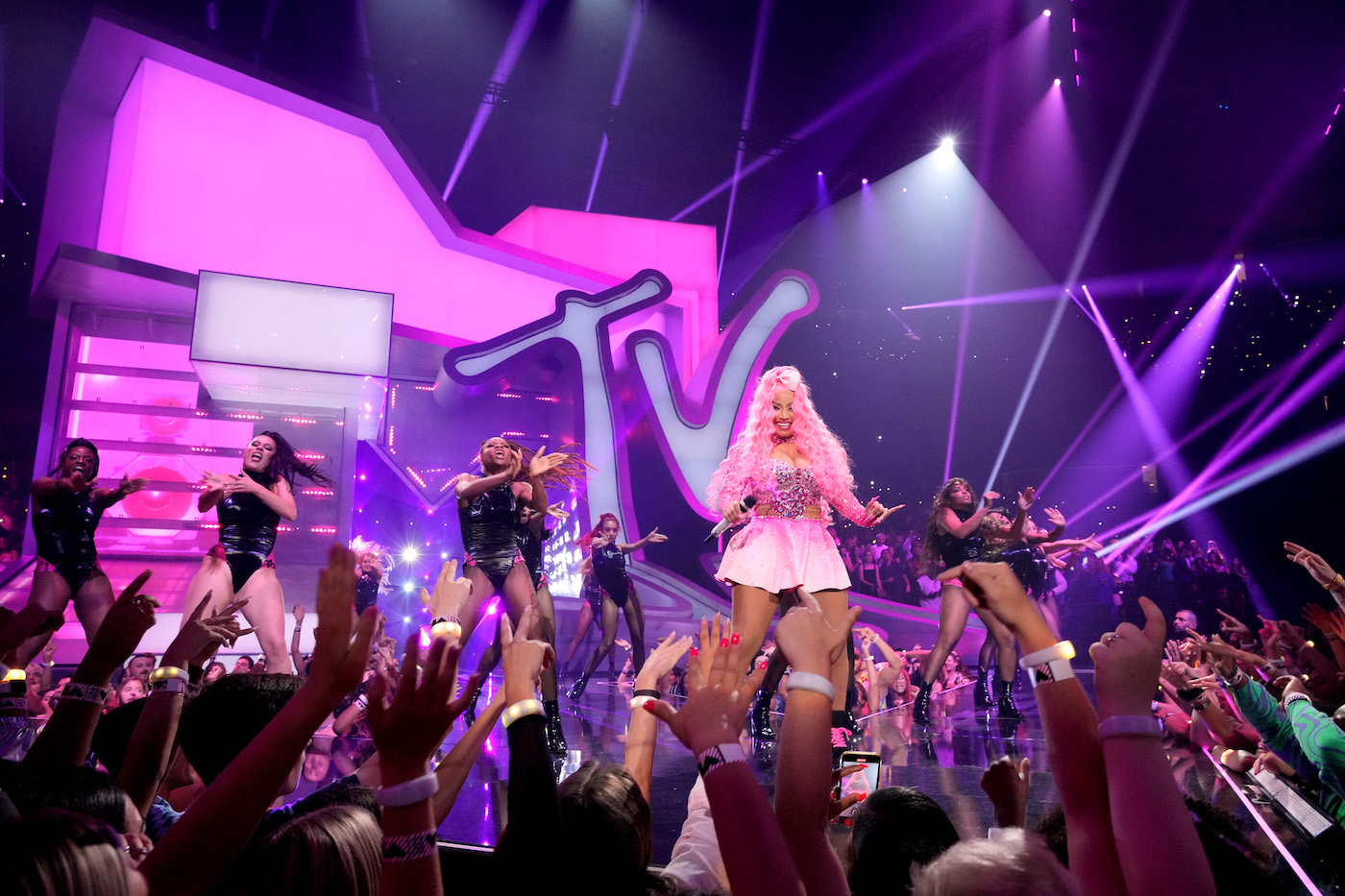 It’s a 10-minute television extravaganza highlighting MTV’s Michael Jackson Video Vanguard Award winner Nicki Minaj, aka the Queen of Rap. Crafted by Minaj, her creative director Beau Casper Smart and the MTV production team and lit with every modern tool available by one of the best lighting designers in the music/video world, Tom Sutherland, the performance takes the audience on a wild ride through Minaj’s musical career.

The sequence begins with Minaj taking the stage in what looks like Barbie’s doll box. To her left is a sign with her name in Barbie-style lettering. Suddenly, an eerie blue silhouette appears as we hear the opening lyrics to Minaj’s 2014 hip-hop classic “All Things Go” – “Yo, I had to reinvent, I put the V in vent…” Flickering lights push the intimacy as the camera gets closer, accenting her signature pink outfit. Minaj shifts her body and transforms into her alter ego – Roman Zolanski – and begins singing “Roman’s Revenge.” A smooth transition to Kanye West’s “Monster” heightens the tension as she sings the iconic verse: “Pull up in the monster, automobile gangsta…” and a scene with a woman tied up on a chair wearing white (similar to what she wore in the video) appears.

As the camera pans wider, Minaj sings “Beez in the Trap,” allowing the home audience to see her Barbie Dreamhouse setup. As dancers in black join her, she transitions again to Minaj’s 2018 MTV VMA-award winner, “Chun-Li.” And, seamlessly, she moves into “Moment 4 Life” from her 2010 debut album, where red-to-pink lighting changes emphasize the moment, and new dancers in pink join her onstage. A dramatic pause as “Super Bass” starts playing, and she walks onto yet another stage – and, while the audience seems to join her – she disappears, and Minaj’s raunchy 2014 hit “Anaconda” takes over. Nearby, another stage that appears to be a nightclub gives way to Minaj performing a new tune, “Super Freaky Girl,” as male dancers surround her. She begins dancing on a couch and then picks up her bedazzled microphone – finishing the song and the high-energy performance. But it doesn’t end there, as five “Barbz” (fans) take the stage and present the Michael Jackson Video Vanguard Award to one of hip-hop’s true royalty.

This spectacular sequence took months to plan and build. Local 600 Lighting Designer Tom Sutherland recalls how the first discussions with Minaj and her team centered on figuring out the best way to showcase the performer’s career over a 10-minute timeframe. “The elements that were important to her were female empowerment and equality,” Sutherland recounts. “And it was important we showcased these things, as we worked to develop a visual-based plan across all three VMA stages.”

Matt Steinbrenner and Ellen Jaworski designed the Barbie house, which sat on the North stage. “It was featured for the first part of the performance,” Sutherland continues. “Within that house, there was a Barbie doll box. For the first minute or so, Nicki is solo within it. Then, we lit it with Astera tubes hidden in the front edges of the box and backlit it via LED tape. It was important that the programming within the box be kept as dynamic as possible and the story developed over the first couple of minutes of the performance.

“When the Beez story began, we started to develop the look out of the box to reveal the whole Barbie house,” he adds. “Nicki was situated within the lower section of the house, which was dressed as a nail salon. We again lit this with Astera tubes as we needed to tuck key lights up into places hard to reach.”

For the final song on the south stage by the Barbie house, “Super Bass,” Sutherland’s team followed Nicki to the presenter stage in front of the MTV logo. “We introduced the lasers and the augmented-reality lion for the next song, ‘Anaconda,’” he notes. “This number was quite tricky, as you have to make the augmented reality look as real as possible, ensuring that lights aren’t spoiling the illusion. We had to carefully zone lasers not to affect the AR but still ensure they were dramatic and impressive.”

As the performance concluded with “Super Freaky Girl,” a modern-day strip club set was featured. Sutherland worked closely with the design team to build LED tape to illuminate the dancers within the podiums. “The strip club had to feel futuristic and dynamic, so we ensured this was reflected through the programming and use of color,” he describes. “We use different tools today, but it’s still all about performance.”

Those tools highlight the trend toward dynamic lighting in the unscripted world, where beams, strobes, and lasers are often put to creative use. “Although, while doing this,” Sutherland adds, “it was imperative that Nicki’s lighting be kept clean. We had to work closely with the camera team and the director to block through the entire performance, sequence by sequence, to ensure that everything was lit perfectly for every shot.”

About those challenges for the 18-plus Local 600 camera crew – the team used Sony P50s and HDC-4300s to make the best of Sutherland’s lighting, using everything from handheld to Technocrane, Trinity to Spidercam to capture this performance.

Operator Nathanial Havholm describes it this way: “Because a high percentage of the handheld’s responsibility, outside the scripted-performance coverage, is audience (especially celebrity audience) reaction, Tom programmed timed lighting cues on the seats featured in the different acts. Getting through the throng of people in time for the scripted shots always poses a challenge, but once routines are established in rehearsals, getting there becomes possible.

“The importance of the handheld utility can’t be stressed enough,” Havholm adds. “The operator and utility work out different scenarios for all shots, including lens changes and tripod locations. We used RF and were not cabled, but that role, even without cable, is essential to our success as operators. To pull this one off, it had to be a very coordinated effort between the director, the lighting department, and the audience department. The AD is the calming voice that reminds us where we need to be next.”

“Working with Tom is always a great experience in that he has every angle accounted for when it comes to lighting,” says Operator Sean Patrick Flannery. “Operating the Trinity on stage for a massive performance like this is challenging. For the opening shot of Nicki, I was only about five feet away, and, naturally, at that distance, shadows from the rig were an issue. However, within minutes, Tom brought up a secondary light source to utilize as her key light, while not casting a shadow on either Nicki or the set from the Trinity or me.”

Sutherland also had to work closely with Video Engineer JM Hurley “to ensure that the gamma and exposure settings would work well for performances using large amounts of haze and AR,” Sutherland notes. “It is important that the blacks in a picture are crushed rather than gray and lifted. You never want to reveal the edges of the room, as that’s when you spoil the theatrical illusion. We walk a very fine line to ensure that the effects you create look fantastic while maintaining great balanced faces.”

Regarding AR, Sutherland says it’s always a tricky balance between content, lighting and camera. “You have to ground the AR image somewhere in the room to make it look realistic,” he continues. “This means avoiding beams of light, physical obstructions, and anything that can spoil the illusion. In addition, the augmented-reality image needs to either land on something or be floating, depending on the type of object.”

AR is truly a team effort. “Because the Spidercam Ross system can fly in a three-dimensional space, it requires a lot of coordination between the AR department and the Spidercam crew,” explains Spidercam Pilot/Senior Engineer Daniel Paulete. “What the viewers at home will see when this is done well is a virtual graphic, which interacts with the real world in real-time. The whole point is to create something that is impossible to create in the real world.”

Paulete says that what makes the Spidercam Ross (wielded by Guild Operator Mark Hunter) different is that it can rotate around or even fly through virtual graphics, “which adds an element that can be very interesting to viewers,” he continues. “The system must be installed precisely because the AR department will use our positional data to place graphics that interact with our movements. If this is not done in a precise manner, then the graphic quality will suffer.”

Sutherland notes that several performances used AR within the show. “Another being J Balvin. This performance had a larger-than-life dancer placed against a real-life ramp where 12 dancers performed,” he states. “It was particularly complex because of having to ground the AR dancer without beams of light cutting through her body. We also had to balance the room’s light and the lighting modeled on the AR character. With roughly an hour’s worth of rehearsal, it was a real challenge to pull together, and I think the results speak for themselves.

“The live event world is challenging,” Sutherland continues. “Technology is advancing at a rapid pace while rehearsal periods are staying the same. It takes a wide range of talented people at the top of their game and a huge amount of collaboration to pull productions like this off. Thanks to all the VMA 2022 crew for delivering a spectacular show.”