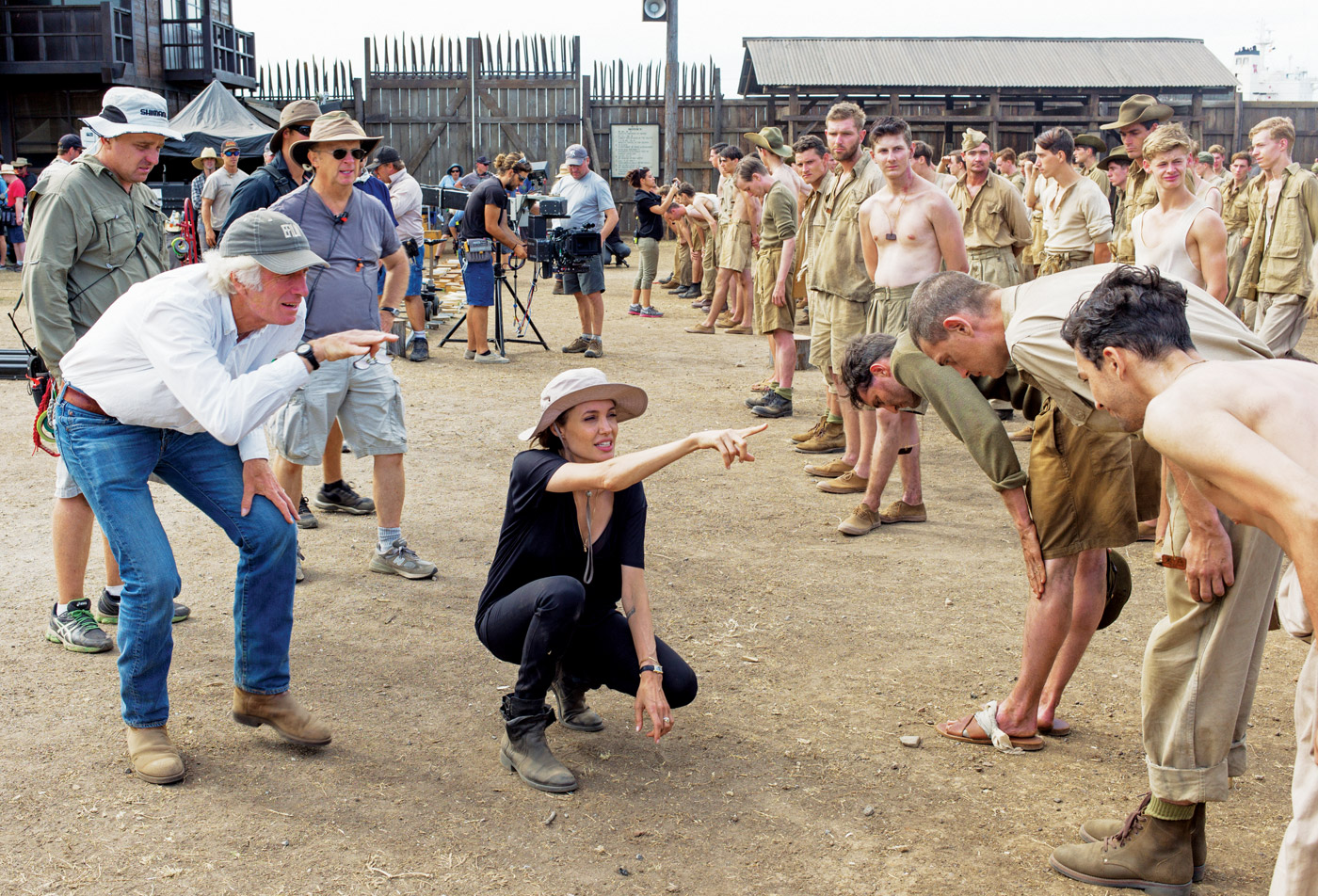 Lovers of the art of cinematography will find a kindred soul in Angelina Jolie. That was obvious three years ago when the Oscar-winning actress presented Dean Semler, ACS, ASC, with an ASC Lifetime Achievement Award. Jolie lauded Semler’s impact on her acting, as well as her recent transition into directing with In The Land of Blood and Honey, a love story set in war-torn Bosnia. With her new film, Unbroken, shot by 11-time Oscar nominee Roger Deakins, ASC, BSC, Jolie has reaffirmed her respect and passion for the cinematographer’s craft in a big way.

Lensed in South Eastern Australia (standing in for Torrance, CA; Tokyo; Japan; Munich; Germany and various Pacific islands), Unbroken exploits the very best of Deakins’ gifts – natural light capture, a single-color-dominant palette, and a subtle use of moving camera – to create a film every bit as remarkable as its subject.

Based on Laura Hillenbrand’s bestseller, Unbroken details the life of Louis Zamperini, whose journey from juvenile delinquent to Olympic athlete to U.S. Air Force bombardier to 47-day survivor at sea (in a raft!) to Japanese POW could easily inspire four movies. That Jolie could corral this epic tale into a cohesive narrative – built more on Deakins’ supple visuals, and indelible performances from Japanese pop musician Miyavi and British newcomer Jack O’Connell than on VFX or video-game cutting – may well put her into the Oscar conversation. ICG Executive Editor David Geffner learned how this remarkable young woman (U.N. ambassador, mother of six, acting Triple Crown winner – Golden Globe, SAG and Oscar) brought a tale of unrelenting human suffering to the screen and came out the better for it.

ICG: You’ve expressed great public affection and respect for how cinematographers have shaped your career. What are your expectations moving from acting to directing? Angelina Jolie: It’s everything. It’s a creative partnership, marriage, and collaboration. The story can’t really be told right without these two people coming together in a meaningful way.

How did Deakins enter the picture? Like everyone, I’ve been a giant fan of Roger Deakins for many years. And when I thought about who Louie was, about the generation he came from, I realized this story had to be classically shot. It had to be beautiful, epic, and command the kind of respect a cinematographer like Roger Deakins can provide. Not all films require Roger’s…presence. But this one did. And I was lucky he felt the same way and had a connection to Louie’s story.

So Deakins agreed a classical approach was the best? Oh, definitely. I talked a lot [in preproduction] about one of my favorite films, Sidney Lumet’s The Hill, which is about a prison camp in World War II, in this case in the African desert. And with Unbroken, I remember approaching sections of [the story] where today’s techniques – like shaking the camera or quick multiple angles – would be used to convey energy. But Roger would laugh and just say, “Oh, no, those are just tricksy shots. Let’s not do that.” [Laughs.] His steady hand really gave me confidence in areas where I was unsure and might have tried to [overwhelm the drama].

Unbroken is such a monumental story. What visual elements did you use to help guide the audience through this vast emotional arc? Well, color is one example where we worked up a careful plan with [production designer] Jon Hutman and [costume designer] Louise [Frogley]. For example, there are only certain warm pinks that belong to Louie’s mother, and we used reds very sparingly – only with the Nazi symbols at the Olympics and the Japanese in the air battles. When they are adrift at sea, it’s only the deep blue of the ocean that dominates, and when they are picked up by the Japanese and brought to Kwajalein, it’s just the green of the jungle that takes over. So by the time Louie is brought to Omori, in Tokyo, where he meets “the Bird” [the sadistic Japanese prison camp commander], all of the color is drained; it’s sepia-toned, almost black and white.

Deakins is renowned for his use of single-color themes and light sources. Well, what’s remarkable about what I just described is that in lesser hands, that plan would have gotten us stuck in just “visual chapters” and made the transitions in his life stand out more. It’s a tribute to Roger that even when we see Louie jump from a plane over the Pacific to the middle of a race in Germany, we are right there, emotionally, with the arc of the story. That visual consistency was amazing.

The brutality in Laura Hillenbrand’s book is unrelenting, even assaultive. How carefully did you consider how you would translate the human suffering in this story? We considered it very carefully. And that’s a very interesting point, because the suffering is relentless. But, as a director, I obviously don’t want to assault my audience to the point that they can’t experience the redemption and inspiration in this story. Louie was spiritual, and he attributed his survival to faith. Conveying that spirituality often came down to the way the film was shot.

What do you mean? Roger and I talked about how God would be represented by light and the suffering by darkness. Sometimes we placed the Bird in partial or even full shadow. During the emotional climax of the film [when Zamperini hoists a massive plank over his head and will be shot if the plank touches the ground], we actually have the sun setting behind the Bird [in full shadow]. That’s a subtle touch that the audience may feel more than notice. Likewise, when there are those relentless days of starvation and suffering on the raft, there is also that beautiful sky and sun, reminding Louie, and the audience, of hope, beauty, and a reason to carry on. Louie’s story is filled with those opportunities, visually speaking. Whenever things got really, really dark, he would experience these moments of light and hope and rise up again.

This film is intended to reach a very wide audience. Yet the personal nature of the violence in the book would seem to challenge that. We talked a lot about how we could make this PG-13 so young people could see it. I believe young people should have something in between animation and horror movies – something in the middle that talks about war, survival and history that they can absorb. And if you look closely there is very little blood in this film. There is no gun shooting, no profanity, and even one of the most brutal scenes [when the Bird makes every POW punch Louie in the face] goes into shadow. I remember how Roger wanted to carefully time the day we shot the scene with 220 punches so that the shadows would grow. By the end, the sun has set, which becomes a strong visual with the Bird and the events that took place. But it was also a way to hide [actor Jack O’Connell’s] face and temper the brutality.

The scene that brought Unbroken together for me was on the raft when Mac asks Louie if he is going to die. Can you point to one scene that defined your goals as a director? Obviously, the plank scene, as I fought for it to be portrayed that way, to make it the scene the entire film would rest upon. But there were other small moments, like Louie as a young boy watching his mom make gnocchi, that tied things together emotionally for me. The raft scene you mentioned was also really important. From when they put Mac’s body into the sea and then we transition into this dark, tiny space in the jungle in Kwajalein is a section I’ve always loved. To go from such a vast space to something so confined is something you can write in a book, but to have the audience experience it visually, with the medium of film, is very satisfying.

You emphasized in the L.A. Q&A about how new you are to directing, and with Unbroken, you may well be one of two women directors [the other being Ava DuVernay for Selma] nominated for an Oscar, which has never happened. Are you an inspiration to a new generation of filmmakers?  It was brought to my attention just how low the percentage of work is that goes to female directors, and I was, honestly, shocked, as I hadn’t been aware of it before. I have friends who are female directors whom I admire. And I know, given the opportunity, they would do incredible work. I sincerely hope that question will be irrelevant in the years to come. I imagine it will be.

In other hands, Unbroken may have been asked to ride this huge action/VFX wave that’s taken over cinema. How did you resist those expectations with the studio? I don’t come from visual effects. [Laughs.] I don’t come from directing either. [Pause.] But, as I was constructing this movie, VFX wasn’t something I wanted to lean on. My nature is to put the actors into practical situations, have a practical [Olympic running track], and on our first day of shooting, put us in the middle of a “practical” ocean, rather than a water tank, with actors bobbing up and down in waves, and floating away. [Laughs.] Roger’s like me in that way, in that we felt the real beauty in the world could not be replaced.

The opening scene of the movie – an air battle over the Pacific leading to a crash landing on an island – is an example of that? Yes, that’s a perfect example of using VFX to enhance the story rather than overwhelm it. Roger and I talked about how much would be inside the plane. In fact, I think there are only a few shots outside the plane. Some enhancements outside the window, some bullet holes, but 98 percent of the scene is practical. We are inside the plane with the guys as they are living through the experience.

Every filmmaker is different and brings a unique aesthetic, as well as certain personality traits, to the party. What is it about Roger Deakins that made this experience successful? He’s extremely honest and unbelievably dedicated to his craft. He’s fierce, and always focused on the moment – not just where the sun is in the sky but what the actor’s emotional space is. He’s strong, aesthetically speaking, and he has a weight, a presence that really comes through. Going to Africa with Roger [for a planned next feature on Richard Leakey’s battle with ivory poachers in Kenya in the 1980s] will yield a film that’s masculine and really of the earth. It won’t be a pretty, superficial view of Africa.