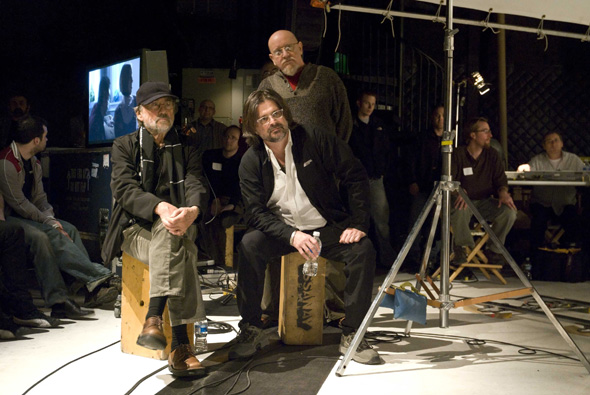 Around the World in How Many Days?

James Chressanthis, ASC, talks about his travels on the indie film festival circuit – from Cannes to Buenos Aires and everywhere in-between

“Recognition for cinematographers, in general, is long overdue. When it comes to Laszlo Kovacs and Vilmos Zsigmond it’s clear that the American new wave of the late 1960s and early ‘70s wouldn’t have flowered as it did without them.”  Leonard Maltin

No Subtitles Necessary: Laszlo and Vilmos, is a feature documentary conceived, produced and directed by James Chressanthis, ASC, which had its world premiere at the Cannes Film Festival in May 2008, and it has subsequently visited 22 other festivals, on four continents, since; and not without its share of fanfare. “(In all my travels) No one has ever asked me who Vilmos and Laszlo are,” Chressanthis observes. “They have become legends in their own time.”

Critics, too, have embraced the project. Like this blurb from Owen Gleiberman of Entertainment Weekly: “Last night on PBS, I caught (this) reverent and fascinating documentary…a look at the art, influence, and longtime brotherly friendship of two of the most fabled Hollywood cinematographers of the 1970s. …I knew who these two men were, understood a few things about their art, and had a dim awareness of the fact they were both Hungarian émigrés. I was amazed at how much I didn’t know.”

The 86-minute film, which aired on PBS stations in September 2009 as part of the Independent Lens series, and which earned Vilmos Zsigmond, ASC, the network’s Vanguard Award, for its tales of seemingly impossible dreams realized, spans 50 years in the lives of the titular characters, Zsigmond and Lazlo Kovacs, ASC. The movie tracks back to when the men escaped their native Hungary in the wake of that nation’s October 1956 uprising against the Communist regime, and the brutal repression that followed. It included comments from some 70 individuals who crossed paths with Kovacs and Zsigmond, images from their films and a range of other clips.

“Some filmmakers and fans at festivals knew about Vilmos and Laszlo before they saw the film,” Chressanthis explains. “But I’ve gotten blank stares when attempting to explain Laszlo’s and Vilmos’s contributions to people outside of the industry. Then, I reel off some of their films: Easy Rider, Close Encounters of the Third Kind, Paper Moon, Deliverance, The Deer Hunter, Ghost Busters and everybody’s face lights up.”

When I asked how he managed to get the project into so many different festivals, in so many different countries, beginning with the granddaddy of all, Cannes, he replied: “I don’t have any secret strategy for getting accepted. Generally, (the programmers) don’t want referrals, copies of reviews or explainations. They want a DVD of the movie and your fee!”

Break Out The Bubbly

Chressanthis explains that Cannes was the right festival for his world premiere because Easy Rider debuted there in 1969. The rave reviews for Easy Rider at Cannes were followed by a successful run at the box office. That provided the impetus that brought Kovacs into the mainstream a dozen years after he arrived in the United States.

“The president of the Cannes festival personally informed me that our film was chosen,” Chressanthis remembers. “It was an overwhelming, thrilling experience. I walked the red carpet with our producing team. We felt so happy that we premiered at the same festival which brought Laszlo Kovacs on the global scene.”

A consistent theme of the movie is the brotherhood that linked the two cinematographers. Kovacs shot That Cold Day In The Park with Robert Altman at the helm in 1969. “When Altman asked Laszlo to shoot his next film, he told him that he had another commitment, and recommended Zsigmond, who he described as his mentor,” Chressanthis explains. Which is how Zsigmond transitioned from shooting films with titles like Five Bloody Graves and Horrors of the Blood Monster to the Altman classic McCabe and Mrs. Miller. The artful western was his first studio film and it could very well have been his last, as Zsigmond shared in a scene from No Subtitles Necessary.

The DP explained to Altman how Freddie Young, BSC, had a lab flash the film in order to create a desaturated look for a project he was shooting. They shot a test, and agreed that was the right visual grammar for McCabe and Mrs. Miller. When a studio executive wanted to fire Zsigmond, because dailies looked desaturated, Altman lied and blamed it on the lab.

“Our film is filled with those behind the scenes anecdotes that movie fans, and even people in the industry don’t typically hear,” Chressanthis says, who adds, that enthusiastic news coverage and reviews at Cannes was the catalyst to being invited to festivals in North and South America, Asia and Europe.

ICG sponsored the premiere West Coast screening of No Subtitles Necessary at the Fine Arts Cinema, in Beverly Hills, in September 2008. Following the screening, ICG president Steven Poster, ASC introduced Chressanthis, Zsigmond and Peter Fonda who engaged in a dialogue with the audience. The screening and discussion resulted in the first major American press reviews and news stories, which helped to propel Chressanthis’ remarkable journey through the independent film festival circuit.

One clip from the movie features former ICG president George Spiro Dibie, ASC introducing Zsigmond at an ICG lighting seminar. “Vilmos left his wife to be with us today,” Dibie announces. Whereupon Zsigmond replies, “I have to correct George’s English; I left (my wife) at home (to be here today). But I didn’t leave her!”

Aside from sponsoring its West Coast premiere, ICG has also screened No Subtitles Necessary for members at the Tribeca Film Center in New York and at the Gene Siskel Film Center, in Chicago. There was also a special screening that played to a packed house at the Los Angeles Museum of Modern Art.

Its creator was invited to fly to London with Zsigmond for a special screening for members of the British Society of Cinematographers.  Another invitational screening is scheduled in Athens, Greece in 2010 in conjunction with a seminar for filmmakers and students conducted by Chressanthis and Zsigmond.

“One consistent theme in the media’s coverage of the film,” Chressanthis relays, “is that it helps people who are not filmmakers understand the important role that cinematographers play. It’s a revelation for them to see images Laszlo and Vilmos created and hear actors, directors and movie critics talk about how they helped to tell stories.

“I was a little surprised, and humbled by the response,” he adds. “One review said to the documentary was the ‘right poetry’ for the story of Laszlo and Vilmos. The reviewer spoke about how (the movie’s subjects) created compelling images for entertaining films that also told stories about the human condition.”

Inspiration for the project dates back to 1984, when Kovacs visited AFI, where Chressanthis was a student, to share his aesthetic approach to shooting Paper Moon.

“Both the film and Laszlo made a deep impression on me,” he reports.

Two years later, Chressanthis interned with Zsigmond during the production of The Witches of Eastwick, when Zsigmond and Kovacs hosted a lunch for the cast and crew celebrating the 30th anniversary of the uprising against the communist regime in Hungary.

“They toasted the spirit of the revolution and those who had given their lives in a quest for freedom,” Chressanthis recalls. “I was struck by their optimism and generosity of spirit. Their affection for each other affected me deeply. I remember thinking that someone ought to produce a documentary about them.”

When he heard that UCLA was hosting a 50th anniversary celebration of Vilmos and Laszlo arriving in America at the Billy Wilder Theater in Los Angeles, Chressanthis decided the timing was ripe. He arranged to film interviews with the cinematographers, as well as other participants, at the celebration, which included screenings of clips from the UCLA archives.

“Laszlo was skeptical,” he smiles. “Various other people had previously told him that they were going to produce a documentary about him and Vilmos. I am grateful that we had opportunities to interview him, and am so sorry that Laszlo didn’t get to see the film before he died.”

There was no production company in the beginning, but Chressanthis doesn’t claim to be an auteur. Various people who shared his dream, including cinematographer Anka Malatynska and many film industry companies rallied to support his ambitious endeavor. With their help he filmed more than 50 hours of interviews.

It was no small endeavor trimming it down to 86 minutes.

“An amazing number of people helped us make this dream come true,” Chressanthis concludes. “We couldn’t have done it without them. I realized while we were on the festival circuit that the story of how Laszlo and Vilmos overcame incredible obstacles on their paths to success is inspiring young filmmakers around the world to be persistent and follow their dreams. I know they inspired me to make this film.”

No Subtitles Necessary: Laszlo and Vilmos is now available in DVD format at http://www.laszloandvilmos.com.