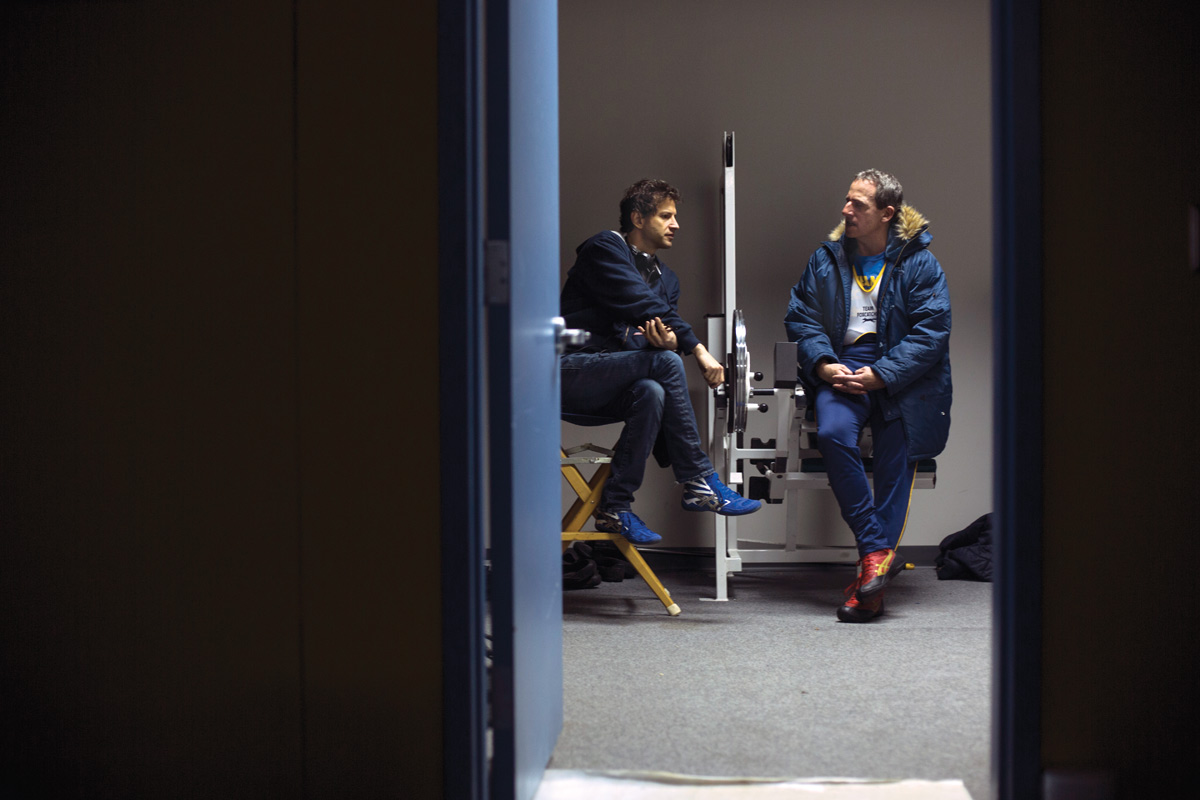 Bennett Miller’s first film, The Cruise (1998), was a nonfiction portrait of Timothy “Speed” Levitch, a tour guide for Manhattan’s Gray Line double decker buses, and it won awards at the Berlin and Newport International Film Festivals. He followed up that sensational indie debut with the narrative portrait Capote (2005), which earned Philip Seymour Hoffman the Academy Award for Best Actor as well as a Best Director nomination for Miller and Best Supporting Actress for Catherine Keener. Moneyball (2011), yet another narrative based on real-life events, earned Oscar nominations for Brad Pitt and Jonah Hill. His new film, Foxcatcher, explores the tragedy surrounding 1984 Olympic Wrestling Gold Medalists Mark (Channing Tatum) and Dave Schultz (Mark Ruffalo) and their relationship with the troubled multi-millionaire John du Pont (Steve Carell). Ted Elrick asked Miller about his love for real-life stories, and the strange, sad relationships that define Foxcatcher.

ICG: All of your films are based on true events and reflect real people. Why do you like this format? I think it’s really appealing to examine these true events. Even if I am looking for something that’s deeper or bigger than the story itself, the fact that the story is something that happened, requiring you to dig and search behind it for clues, makes it all the more intriguing of an adventure. It’s not so much about wanting to tell a story that is true, it’s about wanting to find and understand dramatic aspects that are expressive of the deeper themes of the story.

Is there a trick to reordering and compressing real events, or combining characters, in order to succeed in dramatizing the story without losing the authenticity? I don’t know if I would call it a trick. I think it’s important to revere the essential truths of the people involved and the events that occurred so that we’re never guilty of making the presentation of something that is out of character or could not have happened. I hope that nobody comes out of Foxcatcher thinking, “Oh, he would never have done that. He would never have said that.”

How do you guard against that? One principle is to understand that we are fascinated with or absorbed by a story because it holds some truths that are relevant. We get drawn in and captivated and hopefully learn or see something reflected back at us that we are craving to express one way or another.

Foxcatcher, like Moneyball, is set in the world of athletics, but they’re not really sports movies Foxcatcher is a story that I found haunting and relevant in ways that I could not articulate from the beginning. As I researched and developed it over many years, I kept on discovering what it is about the story that captivated me – it yields some pertinent, guarded truths, and
that’s its thematic cargo.

Much of the film seems to revolve around the search for family? There are many themes woven into it, and we only reveal hints. The Schultz brothers had a rough start right out of the gate, and the older brother, Dave, pretty much looked out for the younger, Mark. John du Pont’s father split very early. So you have father issues in both cases. But we also show John du Pont’s obsession with the founding fathers, with George Washington, and that relates to his patriotism. He gives a speech, “You know the coach is a father.” It’s a complex, interesting cocktail.

I understand a lot of the story’s real people were invited to the set. Dave’s kids and Dave’s widow, Nancy, and Mark Schultz were there. Dave Schultz was a guy who had a thousand best friends, and by all accounts was very generous. Many people who were crushed by his death wanted to be a part of this film in some way. They wanted to share their perspective and be physically present during the shooting. It’s a touchy business telling someone else’s story, especially one that has such a tragic end.

Having them there must have helped keep it accurate. Yes, and I think that was also the most difficult thing. It’s hard enough to make a film, but to realize there are some very real parameters that need to be respected created some real challenges, particularly for the performance.

Were you able to rehearse your cast? I like to rehearse, but it’s not always possible. But I also like to improvise and have that immediacy. The rehearsal process is sometimes the film as we’re figuring out what the scene is that creates interesting challenges photographically. We rehearse before the shooting. We explore and discover on the day.

[DP] Greig Fraser (ACS, ASC) told me about the scene where John du Pont and Mark come into a hotel room to visit Dave, Nancy and the kids, and you selected a hotel room that felt more claustrophobic. Oh, Greig’s lighting in that scene is gorgeous. He did something that was very unusual. He threw in what appears to be an odd band of reflection that you might sometimes get from a tall building that is across the street. It cuts across the frame and through du Pont’s middle. It’s so random, but it really grounded the scene.

This was your first time working with Greig? We had done a commercial a few years back, but this was the first feature.

Was there one sequence that really challenged you both? When the horses are set free –that’s a very sharp turn in the film. At one point we’re thinking of du Pont as a nuisance and pest who begins to look very pathetic. But, on the revelation that his mother has died, the movie transitions into what is hopefully a more disarming representation of a lost soul. And this is an event that actually happened, he released all those horses. It seemed to me to be a very desperate act of a person for whom it would be hard to feel sympathy. I wanted to see him as a fragile child. And how you do light for that?

[Laughs.] Yes, how do you? It just so happens that this part of the country [Western Pennsylvania] this part of the year gets this gorgeous layer of fog on the ground early in the morning, so we decided to shoot pre-dawn. It was pretty dark outside, and you’re inside the barn. The only reason you can see anything is because the dim source of light is present in the frame. It is so dim, it really just gives you an outline or an edge and not much more.

Jorge Sánchez [A Camera 1st AC] said that was the most difficult to get focus on. It was all shot wide open, and you couldn’t really get good marks; you don’t really know what a horse is going to do, and you can’t really know where Steve [Carell] is going to be because he’s reacting to the horses that were getting spooked and could hurt him. Jorge did a great job.

It’s also interesting you chose to shoot film. I understand you even were pressed into using short ends, kind of like in film school. I believe they stopped manufacturing the stock during the shoot. So I was keeping track more than I would have liked to. [Laughs.) I’m worrying about everything else, then suddenly looking at the vital signs. Exactly like film school. I will say, that is something about film that has been lost. When you know there is a finite amount of stock to shoot, and you are not going to get any more, it mandates a thought process that has become more and more rarified.

What did you and Greig talk about for the different wrestling sequences? The first one, at the World [Championships], this is meant to be Mark and Dave in their element and John du Pont in a place that feels foreign. Mark was like a bull in the ring and du Pont is on the periphery, uncomfortable in his own skin. Then the Olympic Trials were meant to be like a courtroom – hushed, like a chess match under the spotlight. We really focused everything onto that one mat. The Olympics were shot like a fevered dream, a nightmare.

So you were pleased with Greig’s connection with the material? Greig did such a phenomenal job, and part of what made him such a good choice to shoot this film is that Greig is a caring and sensitive soul who feels everything so deeply. I remember the scene where we shot Channing banging his head through the mirror; Greig shot that scene with an Easyrig, and we only did one take, and afterward, when he took off the rig, he came to me and said that he literally felt nauseated because watching Channing do that to himself made him physically sick.

That’s the essence of good documentary cinematography, really. Good photography, period. Albert Maysles said that the eye of the photographer needs to be the eye of a poet; the person looking through the lens needs to be feeling the impact. If not, how will he or she know how to move or operate the camera? So much of this movie is about undercurrents, and you need a great sensitivity to be captivated by what’s happening below the surface. Whenever we needed that kind of subtlety, and this is by no means disrespect to Bela [Trutz, camera operator], who was fantastic, I would ask Greig to hop on the camera because he has that sensitivity.

Foxcatcher is reminiscent of the thought-provoking dramas of the 70s and early 80s, which seem rare nowadays. It’s a whole different game and getting more difficult [to make these kinds of films]. In a culture where there is so much activity in the pipeline and such overstimulation in the world, I am not sure what it will take. This film will be a good test to see if people can take a breath and open themselves up to the kind of work I respond to, one that has some of those 70s sensibilities.