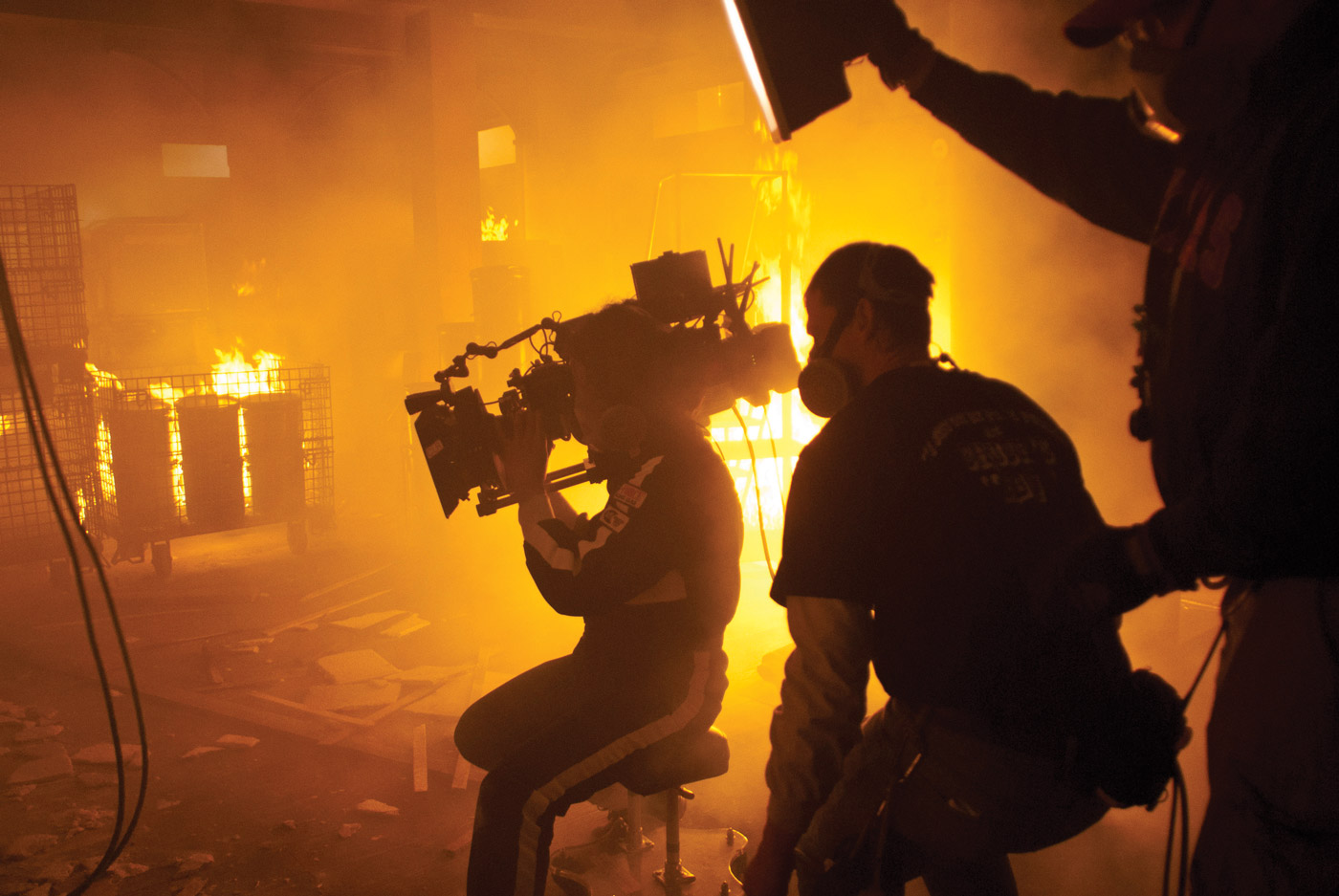 Burning Down The House

Lisa Wiegand and team step into the inferno for Chicago Fire

From Emmy-award-winning TV producer Dick Wolf, who practically invented the urban reality drama with his Law & Order brand, comes this new series documenting the lives of the firefighters, rescue squad and paramedics of Chicago Firehouse 51.

Based on a script by Michael Brandt and Derek Haas (3:10 to Yuma), the story is kick-started by a tragedy that claims a firefighter’s life, causing guilt and blame to spread among the close-knit family of urban heroes.

“Where Law & Order was story-driven, with the issues taking center-stage,” explains Executive Producer Peter Jankowski, “the situations in Chicago Fire are driven entirely by the characters. No one can deny the heroic nature of firefighters, who exist to save lives. We wanted to explore what makes a person want to run into a burning building to save somebody else.”

Jeffrey Nachmanoff was tapped to helm the pilot for Chicago Fire. He brought in Local 600 cinematographer (and NEB Board member) Lisa Wiegand, whom he’d met when she was doing re-shoots on the pilot for Detroit 1-8-7. [See ICG Magazine, December 2011.]

“I really liked how Lisa had picked up on the style we had chosen for Detroit 1-8-7,” Nachmanoff recounts. “She said her approach was like the British system, with the main focus on the lighting. Lisa keeps her cameramen on walkie-talkies with her, but she pays close attention to how they are working within the set for the way she has lit.”

For her first full pilot, Wiegand chose the ARRI ALEXA, calling it a “perfect fit” for its wide dynamic range in highlights and shadow details. “A great example was our night-time exterior burning-building scene, where we have fire effects coming through windows that are a constant higher key light,” she describes. “We’d done tests with the fire using different fuels, heat levels and the fireballs we used for effects.

“What I loved about the Alexa was that we could pull detail in the bright flames and still see the night sky, like the sodium vapor lights bouncing off the mist and night clouds that were low and floating as the building burned down. A lot of digital systems won’t capture that.”

“Most of my shows have an extensive handheld element,” Wiegand continues. “These Alexas are more ergonomic in terms of handheld shooting. Having been an operator, I know other cameras, like the F-35 or the F-65, are harder to deal with when you’re running around with them on your shoulder.”

A prime visual element for the pilot episode was set early on. “Dick Wolf believes that you remain immersed in the perspective of the characters,” Nachmanoff explains. “So the camera does not precede the characters into a fire or emergency scene. That means we are mainly mounted on the fire truck or handheld inside, along the ladders and various places where we could feel like we were experiencing the situation [with the firefighters] for the first time.”

While Wolf’s approach meshed well with Wiegand’s preference for handheld, it did present some interesting challenges for the operators. Reza Tabrizi, who operated A-camera for Wiegand on Detroit 1-8-7 and Necessary Roughness, recalls one shot that began with him standing on a 4×4 wood rig that the grips had attached to the underside of an ambulance.

“As it was driving into a situation, at about 30 miles per hour,” Tabrizi begins, “I’m following where the ambulance is going, then panning over as it comes to a stop. The paramedics get out and I follow them. My dolly grip for the pilot, Scott Thiel, undid the tether as soon as the ambulance came to a stop. Being on the rig, stepping off and following the actors without making it shaky were very challenging. We did four takes and the last two were pretty good.”

Wiegand’s preference for multiple cameras is illuminated by B-camera AC Lewis Fowler, who notes that “even when a scene was designed around one camera, B-camera was always trying to find something else, a few seconds here or there of tight action on some hands or a hammer hitting a wall. We were always getting other pieces for the editor to use.”

All the creatives agreed the city of Chicago had to be a major character in the story. Jankowski says Wolf Films was adamant about shooting in Chicago, citing an example from Law & Order when the studio had pushed for Toronto instead of New York.

“You can just feel, in every frame, how much more authentic Law & Order is because it was shot in New York,” he says. “So there was no way we could shoot Chicago Fire in Vancouver.

“I remember we shot a show called D.C. in Toronto, and we had to really dirty up the spotless streets for a grungy part of Washington. We had a two-day shoot in the location and when we came back for the second day, the city had already cleaned it up! That’s the kind of city you want to live in, but not try to shoot in,” he grins.

Citing the importance of local color, Nachmanoff references a scene where the firemen have to cut a hole in a roof to let the smoke out.

“It would have been easy to find a roof that was more production friendly,” he recounts. “But Lisa and all of us wanted to have the Chicago skyline in the background. We felt that for a pilot you really have to use as much of the frame as possible; it’s very competitive out there and hard to get a series started.”

“I live in L.A., and when I walk down streets or go somewhere, I just don’t see it anymore like I would with a camera. When I’m out of town it’s like I have new eyes for a place because I haven’t labeled and catalogued everything that exists there.

“When I first arrived in Chicago,” she continues, “I’d drive or walk around taking stills from all kinds of different vantage points in available light. Urban lighting says a lot about a city. You can look at the various sources and tell where you are in terms of time and space. To make the audience really feel Chicago, I wanted to use different available lighting fixtures – from fluorescent or sodium vapor, to mercury vapor, LED lighting, and tungsten-based. I wanted to incorporate all those different available sources into our own lighting package.”

Wiegand says that with the ALEXA, she could get any color temperature, biasing the camera’s sensor to see a different kind of light. “Instead of having all these film stocks on hand that are sensitive to different color balances,” she adds, “or having a bunch of different filters on hand to have that effect, I dial it in to the cameras, making it simple and very effective. I used 1 × 1 LED Bi-Color Litepanels a lot. They go from daylight color to tungsten in subtle increments.”

With the City of Chicago 100 percent behind the series, Production was able to set the action inside an actual working firehouse, ensuring that disruptions were minimal. (For the series, the firehouse will be replicated in another section of town.)

The big action set piece in the pilot originally involved an inferno that engulfs a five-story structure. That was cut back to two-and-a-half stories, which presented logistical and planning challenges (like redressing different floors) for the crew during the three-day shoot.

Wiegand credits 1st AD Gary Rake with keeping everyone clear with the shots they were getting and still needed. “We didn’t have the luxury of shooting a couple pieces that were in the lobby, then going out and doing location work while construction built the next section,” Rake recalls. “All the shots had to be done at the end of the shoot, and we had to give Construction and Set Design very accurate guesstimates of when we’d need to do the changes. We were also doing a lot of green screen, because if you ever wanted to point a camera up through a hole in the ceiling, there was nothing there two stories up. As long as they were able to tell me exactly the shots they needed, I was able to create a schedule that worked for everybody.”

Fowler notes that fire sequences in general are difficult for a 1st AC.

“Between the smoke, the masks the firefighters wear, and shooting through flame bars, it was often tough to see where focus was,” he says. “So you had to find tricks to help you out. All the helmets had really high-contrast character nametags on them, for example. So when you might not be able to see the actor’s face because of the smoke or mask, you could at least focus on the helmet just to know you were in the right ballpark.”

Gaffer Tony Lullo had worked with fire before on the 2nd unit of Ron Howard’s fire movie template, Backdraft, which many in the production watched before shooting began.

“There is quite a bit of difference shooting fire digitally, than on film,” Lullo explains. “You are almost toning down the fire, so you have to be careful not to over-light.”

Describing a “flicker effect,” to supplement the flame bars, Lullo says he used an “old-school covered wagon, which is practical bulbs with one-and-a-half straw, five- and six-foot panels, that I put into a fire flicker box to light up the background. For anything where we needed a little more pop, we used 1K par cans with stock bulbs. It’s easy to make a fire effect look really bad with a bigger light. It’s better to use smaller filaments so you get a faster return and a faster pop.”

Practical shots of flames were layered in post using Autodesk Flame. VFX supervisor Scott Rader of SPY LA says his team did tests for window box fixtures, shot with varying degrees of flames (going at different speeds, intensities and heights), which they could lay in later to the exterior shots of the building on fire.

“It’s always better to use practical images for fire,” Rader states. “CG is just not as good as we want it to be [for fire], yet.” Noting the benefits of the ALEXA on a “fire show,” where VFX requires detail in the flames that is not clipped in the whites, “and all the picture information in the shadows,” Rader says Wiegand provided “terrific imagery” for his VFX artists all working in Log C. “The flexibility we had in compositing elements such as fire, smoke, dust and embers from our library made integration and color matching pretty seamless,” he adds.

As for Wiegand, who is a Detroit native, she says she was “overwhelmed” by the level of support she and her Local 600 camera team received from Chicago’s real urban heroes.

“When I heard we were going to be shooting in a working firehouse I wondered, how is this going to work?” she laughs. “Firemen will be taking calls, alarms will be going off and they’ll be rushing out while we’re shooting. But truthfully, we never noticed, and I can think of only one time when we had to cut and get out of the way. It’s been an amazing partnership, and we’re very lucky.”