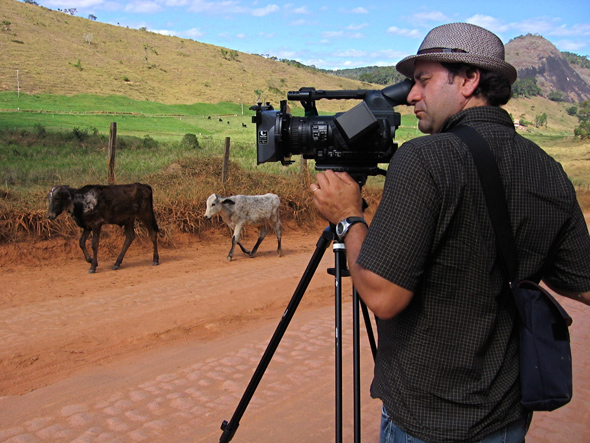 “Since the beginning of time, of all the planets in all the galaxies, of all the known universes, only one has a living, breathing, skin, called dirt.  Both dirt and humans are made of the same elements that were forged billions of years ago in exploding stars. We are all star dust.”

So intones narrator Jamie Lee Curtis at the outset of Dirt! The Movie, a new documentary from veteran non-fiction filmmakers Gene Rosow and Bill Benenson, based on William Bryant Logan’s book Dirt: The Ecstatic Skin of the Earth. This intriguing narration, overlapping a progression of striking, celestial images, invites viewers to consider that soil, the  indispensable membrane of our world, is the matrix through which many of the current challenges and future hopes of the human race can be understood.

Shot on four continents by a relay of cinematographers, Dirt! The Movie intentionally avoids the talking-heads syndrome of more traditional non-fiction features. “On the one hand,” says Bill Benenson, “we wanted to go to the environments where people live and work, and see the story unfold, in action, rather than just commenting on it. But there were also things we had to address, like the nitrogen cycle – where nitrogen fertilizer from the mid-west goes into the Mississippi, then into Gulf of Mexico – that we couldn’t illustrate through cinéma vérité.”

Consequently, Dirt! The Movie also incorporates animation to both accelerate time and compress geography, keeping the unfolding argument lively, three-dimensional and engaging. Adds Benenson, “We had to undertake a certain balancing act between science and accessibility in our approach and the animation helped to strike that balance.” Says Gene Rosow: “The feeling (after reading the book) was that you’d never look at the ground beneath your feet in the same way. And that’s what we wanted to do with this documentary: we wanted to show that dirt is a living substance. Above all, it offered a way to make a positive statement about the steep shit we’re in as a species,” Rosow laughs, “with respect to the environment.”

Men of the Earth

Director of Photography Antonio Rossi (who shot the Academy Award nominated, “No End in Sight”), lensed sequences for the project in various parts of the U.S. and Brazil. He emphasizes that the intention was to avoid falling into any sense of doom and gloom around the subject. “What excited me about this film,” Rossi recalls, “was that even though this is a potentially catastrophic topic, the take on it is so optimistic; because it’s about all of the people who are really trying to change the direction that things are heading. I work on a lot of documentaries dealing with depressing topics, but at the end of the day, on this one, I was overjoyed.”

Rossi’s work on Dirt included the coverage of many outstanding, creative minds: photographer/activist Sebastião Salgado, co-founder of the Instituto Terra, with wife Leila Salgado (http://www.institutoterra.org), at their massive rainforest preserve in Brazil; land-and-plant-use innovator Wes Jackson, President of The Land Institute (http://www.landinstitute.org) in Kansas; and Peter Girguis, Assistant Professor of Organismic and Evolutionary Biology at Harvard.

“Besides shooting in Brazil,” Rossi remembers, “the main highlight, cinematographically speaking, was shooting the Peter Girguis interview, which we lit exclusively with the power derived from a microbial fuel cell: that is a fuel cell that obtains its power from the movement of microbes in soil.  I don’t think that has ever been done before!”  [Girguis and company’s work was recently awarded funding from the World Bank Group’s Lighting Africa 2008 Development Marketplace competition.]

Working with small teams and the minimum amount of equipment, the main challenges of shooting Dirt were often more environmental and circumstantial than technical and artistic. Heat, crowding, bad roads over long distances, and the occasional irate, local official or striking workforce hassled the filmmakers more than where to put the camera . On one level for the cinematographers, once the setting was chosen, it was largely a case of point and shot.  Contributing DP Ben Bloodwell, a long-time collaborator with director Alex Gibney (Enron: The Smartest Guys in the Room), recounts that, “it was a stripped down approach.  Documentaries can go from the Enron approach, where you are bringing a full lighting package with you, down to reality TV. On this show, they didn’t want reality TV but they didn’t want the high lit approach either.”

“The challenge for the DPs,” adds producer/co-director Eleonore Dailly, “was being at the end of the world with very little equipment, challenging weather conditions, and multiple languages (sometimes with an interpreter, sometimes without).” But certain choices, like the decision to travel light, did have advantages. While originally renting various cameras as they went (and encountering resulting workflow/compatibility issues) the production put down the money for a Panasonic HVX 200, because “of the ease provided by the HD format,” Dailly notes. “We were traveling around the world, and wanted [a camera package] that is easy to back up, and not too conspicuous.”

India, in particular, presented numerous challenges. “It is a tense country, with a population density that is extraordinary,” remarks Benenson. “There is an extreme difference between poverty and wealth. India is as in your face as any filming environment you would ever encounter. You need to be on your toes all the time.”

And yet despite the hurdles, Dirt!’s Indian sequences provide some of the documentary’s most startling stories. More than 200,000 of the nation’s farmers have committed suicide in the last twenty years due to stress and despair over debt and drought, often drinking the very pesticides they have been encouraged to purchase by a global agribusiness that has successfully insinuated itself into their communities and farming practices. As Dailly relates, “one of the most moving experiences was hearing a local, Indian village leader, Pushpindra Singh, tell us how amazing it was that we were there, because nobody was listening to them, including their own government; and how important it was to him that the word would get out because we had come to film there. He introduced us to the dignitaries in his village, and asked us to explain why we were there. They published an article in the local paper about our crew and the film. It was a moment where I felt that we were really going to make a difference.”

The general consensus on the Dirt! production team was that the shoot provided rewards of a spiritual nature, because as Rossi stresses, “the interview subjects who inspired and elevated the experience.” Not that dealing with experts and career environmentalists was a simple matter, i.e., steering subjects away from the grand or long-winded statement.

“People like Andy Lipkis (Founder, Tree People) or Vandana Shiva,” Rosow points out, “spend their lives making speeches. I remember saying to Wangari Maathai (Nobel Laureate / Founder – Green Belt Movement), ‘I’m in awe of you, but this needs to be more personal.’ So we started out talking about their childhood memories, bringing out their relationship to dirt in a more personal way.  Some people tend to go off on policy statements, and we always tried to get them to talk to the audience rather than stand in front of a podium. We had Wes Jackson (President – The Land Institute) sitting on a merry go round (laughs) as we talked. The goal was to avoid formal, speechified posturing and allow [subjects] to be personal, even angry, but always ‘right there.’”

One sequence focuses on Rikers Island prison in New York City, and a program called The Greenhouse Project, which teaches inmates gardening and horticultural skills in order to help them re-integrate into society. As witnessed through the film, however, playing in the dirt also brings the prisoners happiness and fulfillment.  But as Rosow describes, these were not people used to speaking their minds on camera, so the filmmakers took a different approach in preparing the segment. “The Rikers Island sequence is not in the book,” he shares, “and when we first met the inmates we brought no cameras with us, and simply sat down and talked.”

Bloodwell says these informal interactions eventually yielded stunning results. “What we were seeing was their relationship to the soil and what it can give back to them,” he picks up. “It was interesting because you do have a stereotypical view of what you will find when you go to a prison, and in a program like this you may assume a cynical component – a way for inmates to get out early on good behavior.  Then you talk to them and you realize that these people are looking for a way to improve their lives.”

“It’s amazing how the people on Rikers Island, who [society] considers throwaways,” Benenson adds, “will rehabilitate their lives and city through contact with this stuff that we don’t pay any attention to! For them to be so emotionally articulate about dirt was a wonderful element that went beyond what we anticipated.”

Audiences seem to be equally surprised and responsive. Funded by private contributions through Common Ground Media, a non-profit corporation, Dirt! The Movie had its World Premiere at Sundance 2009, where an enthusiastic industry response pushed the picture out into the larger world. “I’ve been at Sundance four times,” Rosow explains. “And the old model is: get it made, get it to Sundance, go for the backroom deal, get it into distribution, then DVD, and you’re done. Nowadays, the theatrical distribution window for independents is extremely tough, so our results [at the festival] were much more non-traditional. PBS approached us to screen the film for their next Earth Day broadcast; New Video wanted DVD rights, and we’re also in negotiations on an educational version. We plan to sell our own DVDs on the web for a limited period of time, and DVDs for community action screenings start the first of November. We’re working with Peter Broderick, who is a guru of hybrid distribution, to use every means available. Starting with Sundance and continuing forward we have had well over 1000 requests to screen it with groups around the globe.”

Concludes Rossi, “I think that those of us working in documentaries are often looking for those experiences that will effect our lives in positive ways; and this film really did that. Especially when times are good, you may feel like turning down jobs where it’s not going to be fun technically, it’s too low budget, or you can’t necessarily make a big statement visually; but the process of working on these projects can inspire you on a whole other level that can be extremely valuable and rewarding.”