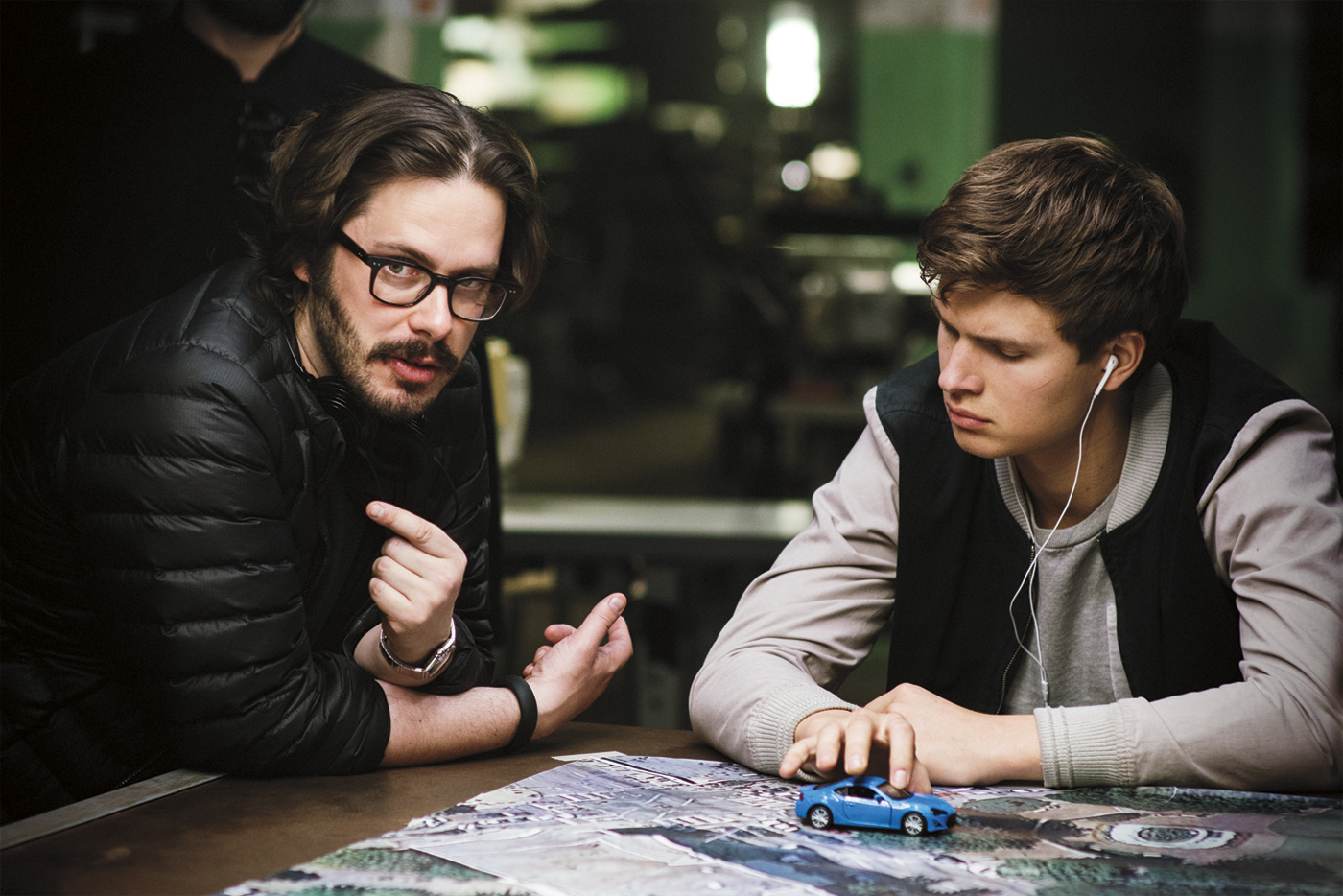 Of his frequent partner in creative crime, Edgar Wright, cinematographer Bill Pope, ASC, describes the director as someone who remains open to collaboration that expands on his vision. “You can always suggest something different to [Wright], and if he likes it, he’ll say, ‘Yeah, let’s do that too.’ He thinks the cardinal sin for any filmmaker is to bore the audience.”

Based on Wright’s track record as both writer and director, there’s little chance of that ever happening. Beginning with the 1995 16-mm indie project A Fistful of Fingers (don’t bother Googling it; the film is not commercially available) and continuing through his early work in the U.K., Wright’s edgy and eccentric humor has struck a resonant chord with audiences, particularly fans appreciative of his throwaway references to other films. His first two features, Shaun of the Dead and Hot Fuzz, went beyond just sending up the zombie horror and buddy-cop genres, delivering moments of poignancy rare for comedy satire.

Before concluding his trifecta with actor Simon Pegg with 2013’s The World’s End [a trio of projects alternately dubbed The Three Flavors Cornetta Trilogy or Blood and Ice Cream by its makers], Wright adapted the quirky graphic novel, Scott Pilgrim vs. the World, which launched his ongoing collaboration with Pope. Cameras rolled six thousand times on Pilgrim – and that’s not counting the setups needed to shoot the film’s music videos! Wright also contributed a short segment to the Rodriguez/Tarantino Grindhouse and has been linked to upcoming adaptations of the novels Grasshopper Jungle and Fortunately, The Milk.

While detractors say Wright caters too much to pop-culture devotees, there’s clearly more to his storytelling than just homage and flashy cinematic innovation. This is evidenced by Sony’s Baby Driver, which, while not shirking on the filmmaker’s trademark strong visuals, also mines a deeper dramatic vein.

You once said that many of your characters are “governed by the media they consume.” Does that continue with the main character in Baby Driver, forever tuned to pop songs that rev him up to drive? Wright: It’s a little bit more organic in this movie, in that it’s quite literally happening. Baby [Ansel Elgort] listens to music throughout to drown out his tinnitus. I took the idea of how music can be a powerful motivator for some people, and wanted to explore how that can border on obsession. This became the central conceit of the movie, making it a car-chase movie truly driven by music. And sustaining this for a whole film is what really offered the most appeal for me initially, before I started getting deeper into the characters.

Did it take the crew a while to get into this metronome/playback approach you wanted? It wasn’t that different from shooting a music video, really. The stunt guys and Bill Pope knew what was needed to make it match up, and I’d get the songs to everybody else in advance so the camera operator and the grip would be familiar with the beats as well. There were some noisy times during the shoot when the actors and crew couldn’t hear the music, so we also had a [metronome] for cadence. I had boarded the whole movie nine months in advance. The five big action set piece sequences were readied in animatic form so we could show it to the studio to let them wrap their heads around it. We did a huge amount of prep, rehearsing with a choreographer and actors. We had storyboards cut to music. So there was a lot of material to help everybody get on the same page and be in sync, so to speak.

Having one of your editors [Paul Machliss and Jonathan Amos] on set to cut as you went seems unorthodox. We did that to make sure the music was working as intended and we wouldn’t have surprises. Editing on set is easy when you’re in the same place all day, but when you’re doing full-on moving car-chase stuff, it is a lot tougher. We had a command van with [the editors] aboard, but even with the best technology, you’re at the mercy of the transmission if the satellite link goes out. Sometimes, just to be sure we were getting the images I needed, I’d strap myself to the car alongside the focus pullers and watch the take on a hard-wired monitor.

Was there one particular film that inspired you to do this? As our title suggests, Walter Hill’s The Driver is an influence. I saw it when I was 14 on late-night TV, and while it is very simple, I found it quite hypnotic. I think Walter was on the cutting-edge as a director, and to me he is the forerunner to James Cameron, Michael Mann and Quentin Tarantino in a lot of ways. Nicholas Refn too. I consider this whole movie to be a tribute to Hill, who actually has a cameo – you can hear Walter’s voice in a scene at the end, for those of you who know what he sounds like. [Laughs.]

Is the professionalism evinced by the characters somehow appealing to you? That’s it in part, but I’m a big fan of 1960s and ’70s car-chase movies. Not just the obvious ones like Bullitt and The French Connection, but Vanishing Point is one, Dirty Mary Crazy Larry, and later on The Blues Brothers and To Live and Die in LA. I consider three ’90s movies as the holy trinity of heist movies: Point Break, Reservoir Dogs and Heat. All three are Los Angeles-based and tales about the gangs themselves. Reservoir and Heat very much have the attitude I’m going for in this movie – that these are professionals who do a job and then get out. I always find the procedural aspect fascinating. How they don’t often use fancy cars to stay inconspicuous.

Critics have said all your films – including the Spaced series – are to some degree about immature adults facing that they have to grow up. Yeah, but this one is almost like watching a “workplace” movie because Baby is the apprentice of this gang – he’s like an unpaid intern working to pay a debt. [Laughs.] When Kevin Spacey tells him that his debt is paid and now comes the fun part, Baby has to make a decision about doing this professionally or not. Can you be involved in crime without being a criminal? The answer is no!

And yet your characters might be inclined to rationalize away their actions. Baby feels that as a driver he isn’t as complicit, because he’s not the one holding up the bank. I wanted the moral quandary to be an issue, like older movies that had to follow the Warner/gangster message. Recent caper movies don’t seem to have any repercussions for these criminals. In the Fast and the Furious movies, they get involved with taking down the worst criminals, which I guess makes them, what, okay? Ultimately, I think Baby is, at his core, more like the good guy in the nest of vipers, who has to figure a way out.

How does your energetic visual style juxtapose with the more weighty ethical considerations? The set pieces modulate as the film goes on. The first chase is a dream chase; it all goes like clockwork, not a scratch on the car. But then things start to go wrong, and Baby even gets out of sync with the song he is hearing.

Like your previous features, Baby Driver was shot on 35 millimeter. Was that a hard sell? There’s always the conversation about how much you save by shooting digital. I think the financial savings is not quite as advertised. For one thing, when you shoot on film, you start out way ahead on the grading. On this and my previous two films with Bill, I think we achieved the final grade much faster. Also, I like both the discipline of film and the richness of it. Eric [Fellner, with Working Title], who has produced most of my films, asked me to explain in the simplest terms why film is better than digital. To be sure I gave the right answer, I asked Bill his opinion, and his response was that it is more “transportive.” I liked that answer. Film isn’t like real life; it’s like the movies.

On Scott Pilgrim, the “magical realism” sequences are differentiated from the rest of the film, in part, by switching from spherical to anamorphic. But there was still the matter of seemingly real characters suddenly imbued with great powers. You were confident audiences would accept that leap? I thought of it as being something more in the way of an old movie tradition for certain genres, like when a character suddenly burst into song or Gene Kelly starts dancing. It’s a leap, yes. But even in the regular part of the film, we still have the fantasy of how Scott lives in his own head. He hears studio applause when he enters a room! Bill and I did the switch from 35 millimeter to anamorphic and back on The World’s End too, to save money on stock. I justified going anamorphic for the scenes when they get drunk, and then in the epilogue we’re back to spherical.

You acted as executive producer for Joe Cornish’s debut feature Attack the Block. Any further interest in pursuing that as well as directing? I haven’t done it since helping get Sightseers [directed by Ben Wheatley] off the ground, but I wouldn’t rule it out. There and with Attack, I was just lending a hand to filmmakers. Offering some support to up-and-comers is really what that is all about.

You also lend a lot of support post-release to your features. The fans really love all the extras, and it’s fun getting together to record the commentaries. There’s a tenth-anniversary screening of Hot Fuzz next week, and Timothy Dalton is going to do the Q&A with me. I did a Q&A for The World’s End in which some film nerd got up and asked, “Am I right in thinking that only part of the film was shot anamorphic?” I was ecstatic and told him, “You’re absolutely right – and I’m so glad you noticed!”