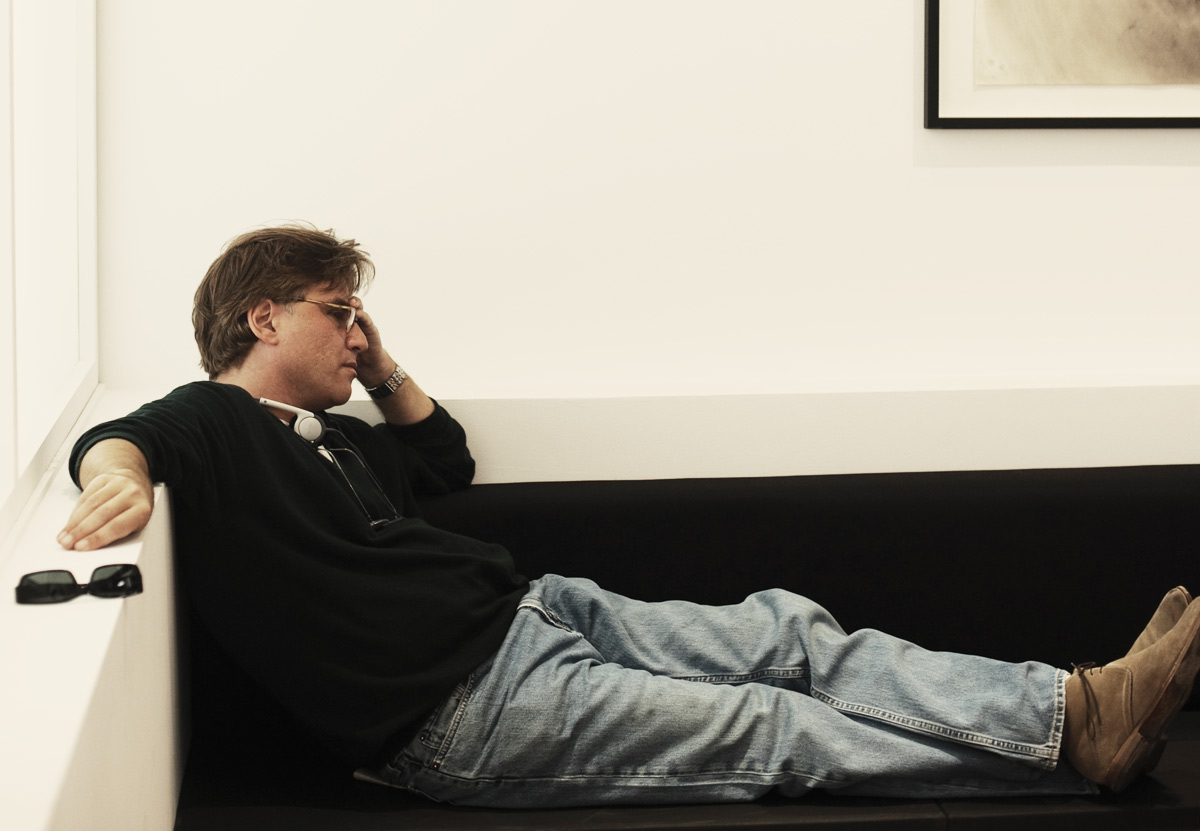 Aaron Sorkin came to prominence in 1989 with the smash Broadway play, A Few Good Men, which garnered him the John Gassner Award for an American play by a new playwright. His film adaptation a few years later, forever immortalized by a growling Jack Nicholson insisting American civilians “can’t handle the truth,” swiftly propelled Sorkin to Hollywood’s A-list for screenwriters. He followed up his courtroom drama (A Few Good Men earned Oscar, DGA and ASC nominations) with a string of notable feature films – Malice, The American President and Charlie Wilson’s War – and television series – Sports Night, The West Wing and Studio 60 on the Sunset Strip, functioning in many cases as both writer and executive producer. His most recent project, The Social Network, charts the founding and early days of Facebook and its notorious creator Mark Zuckerburg, a brilliant Harvard undergrad who ruffled many feathers on the road to making 500 million friends. Chris Wolski spoke with Sorkin about why he prefers to emphasize dialogue when creating a film template, and why he was glad William Shakespeare wasn’t in the running to write The Social Network script!

ICG: What’s the difference between writing for television and film and how did it influence the way you approached The Social Network? Aaron Sorkin: I would say the big difference (in features) is that you have more time. For a one-hour show like The West Wing or Studio 60 on the Sunset Strip, I had eight days to write a 42-minute script, and by and large the director was shooting my first draft. With The Social Network, there was plenty of time to do research, to think about what I was going to write, to write a first draft, and to work with (producer) Scott Rudin to refine that first draft. There was also time for (director) David Fincher and me to further refine that first draft. Certainly, coming from television it felt like a luxurious shooting schedule.

Is there an example from the film that highlights the difference between film and television production? The movie opens with a seven- or eight-page scene between a guy and a girl. It’s two people sitting at a table with a master and two overs. If that scene were in one of my television shows, we’d have a morning to shoot that, basically. With this we had two full nights to shoot that scene. David Fincher did 90 takes of just the master – not because it was a complicated shot, but because it had a lot of language. It’s very dense. And we have a very talented, young cast, and David just wanted to tire them out and knock the acting out of them and get them to concentrate on the language.

Who are some of your influences as a writer? (Laughs) Every writer I’ve read or whose work I’ve ever seen influences me. The biggest would probably be Paddy Chayefsky. He wrote Network, which has some similarities to The Social Network. Others would be David Mamet, Tom Stoppard, Arthur Miller, Clifford Odets, and everybody, of course, says William Shakespeare.

How did these influences show up in The Social Network? The influences are in my bloodstream. When I’m writing something, I actually avoid going to the movies, because I’m so easily influenced by something that’s good that I’ll say to myself, ‘That’s how I should be writing that.’ When I start writing I always try to write like somebody else, and then on page one and a half, I flip all the cards and start writing like me.

What was it about the proposal that got you by page three? It’s a contemporary subject, but the theme of the story is as old as storytelling: friendship, loyalty, betrayal, jealousy, power, and feeling left out, wanting to get in – that kind of thing. It’s a story that Aeschylus would have written, that Shakespeare would have written, Paddy Chayefsky would have written. None of those people were available so I got lucky. (Laughs)

You wrote the screenplay at the peak of the popularity of Facebook. How did that influence you? It didn’t and here’s why. There’s not too much I know about Facebook in 2010. I probably know a lot about Facebook in 2003. But when I started this, I really didn’t know what Facebook was. I had heard of it the way I had heard of a carburetor. But I didn’t know anything about it. The first thing I did was get a Facebook page to find out what it was all about. I don’t know much about it today, but I have a little more interest since I spent the last two years (writing about it). And by the way, I took my Facebook page down when I finished the script.

Facebook founder Mark Zuckerberg, is for the most part, an unsympathetic character. But near the end, you almost let him off the hook – why? Here’s what happened. For the first hour and 55 minutes of the movie he is an anti-hero. For the last five minutes, he’s a tragic hero and there’s a big difference. When I’m writing a character that’s not a good guy, I try to write like he’s making his case to God – why he should be allowed into heaven.

Did your view of Zucerkberg change from draft to draft? It was solid, but it became more refined from draft to draft. I will tell you this: There was never a moment when I didn’t like him. And not just because I had to when I was writing about him. I think that he meets the definition of the tragic hero.

The film is actually dominated by social networks – the Harvard finals clubs, sports teams, social classes – and Zuckerberg, the outsider, struggles to work his way in. You’re absolutely right. He’s a guy who’s got his nose up against the window. It’s not uncommon growing up that we may feel like a loser, or told that we’re a loser – and some survive better than others, and here’s what happened to somebody who had a genius IQ.

Why do your screenplays tend to emphasize dialogue over the visuals? I’ve never been interested in fantasy or special effects. Many of my contemporaries grew up on movies. They can tell you who the second AD is on any Hitchcock movie. I grew up on plays. My parents were taking me to plays when I was little and really didn’t know what they were about, but I loved the sound of the dialogue, and I wanted to imitate that sound.

When you’re writing are you seeing the movie in your head? Yes, I am. The director is going to shoot the way he wants to shoot, but I don’t want to give him something that I haven’t been able to imagine in my head. By the way, I feel the same about actors. I’m saying the dialogue all out loud as I’m writing so that I know they’re beautiful words.

So how did the movie in your head compare to what ended up on-screen? Mine was good; but David Fincher’s was better.

Were you involved with the choice of Fincher as director? I was involved to the extent that I was keeping my fingers crossed! The script was only going to one director. David was everybody’s first choice and he got the script on a Friday afternoon. I heard from him in a matter of hours. He said, ‘We’ve never met, but I think we’re going to.’

In a way, Fincher was the best choice, since his films all deal with outsiders who need to build their own social structure to survive and fit in. That’s really interesting, I hadn’t thought of that, but what I would say is now, after The Social Network, I don’t think there’s any picture that isn’t David’s kind of picture. He’s an absolutely fearless director. He did a beautiful job, as did (cinematographer) Jeff (Cronenweth, ASC).

Fincher is known for his surprising visual style, and you for your crisp dialogue. What was that working relationship like? For several weeks, we got together almost every day for a few hours. We went through the script page by page – we’d look at a line here and a line there – but the first draft and the shooting script were very similar. There were never many big changes. It was always small changes.

You’ve written everything from big Hollywood dramas to episodic period television. Which cinematographers have you liked the best? I would work with Jeff Cronenweth (ASC) on anything, as many times as he wants! Tom Del Ruth (ASC) was the DP on The West Wing, and I thought he did a great job.

Anyone you’d like to work with in the future? Well, I have a great respect for cinematographers. But I have a problem. The Social Network was my fifth movie, and I’ve also done three television shows. And throughout it all I’ve managed to absorb none of the science of filmmaking. I try to listen to the conversations between the director and the cinematographer, so I’m not sure why I’m not learning as fast as I should. Quite honestly, I don’t know if someone is a good cinematographer until I’ve seen their work after the fact and can judge by the finished product. I do know that Jeff did a great job right after I saw the first cut of The Social Network.

How active are you as a producer? As the EP on Sports Night, The West Wing and Studio 60, I was involved in everything from casting to post production. I have a great creative partner in Tommy Schlamme, whom I completely trust to take the lion’s share of the heavy lifting so that more hours in the day are freed up for me to write. I’ll go to the set for first rehearsal (that’s just the actors, the director and me) where we’ll read the scene through a couple of times and talk about it. I’ll come back for camera rehearsal and watch as we shoot the master. I’ll come back again several times throughout the day and night just to check on things and say hello. I’ll also be called to the editing room, a production meeting, a scoring session, etc., but most of my time is spent writing. For The Social Network, I just wrote the screenplay. But I was on the set every day.