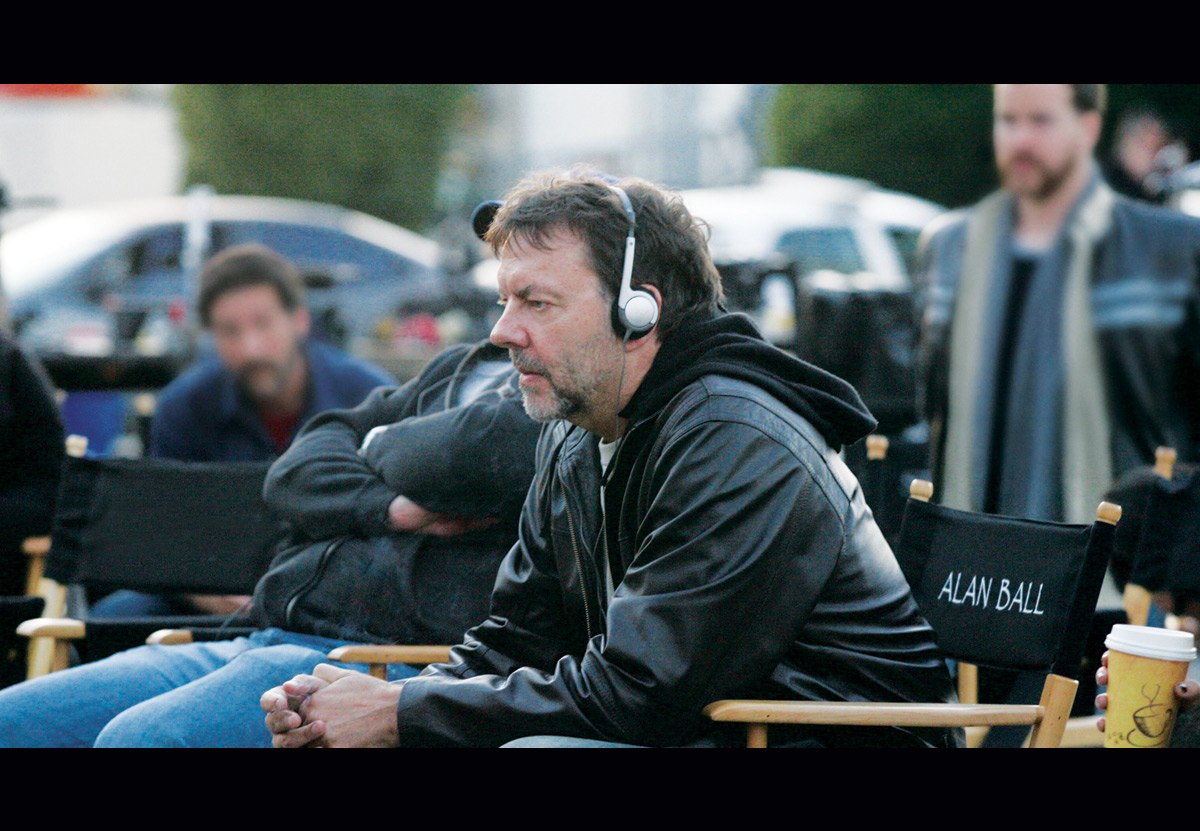 Many would argue the original programming that has come out of HBO in the last few decades has forever changed the face of television – for the better. Dating back two decades to the cable network’s airing of Robert Altman’s groundbreaking miniseries Tanner ’88, right on through more recent episodic series like David Chase’s The Sopranos, Darren Star’s Sex and the City, and David Simon’s The Wire, HBO has proven to be eerily prescient at finding the best talent in the industry and letting their creativity run wild in the night; an apt metaphor for their new show, True Blood, about vampires who live (nearly) normal lives among their mortal brethren in rural Louisiana. Created by Alan Ball, whose magical touch for juxtaposing the ridiculous with the sublime was off the charts in his last HBO effort, Six Feet Under, True Blood plays with genre, drama, Grand Guignol comedy, and who-knows-what-else in the most unexpected and visually entrancing ways. Currently shot by Matthew Jensen and Romeo Tirone in Los Angeles and on location in Shreveport, Louisiana, True Blood is, lest we forget, also the product of an Oscar-winning screenwriter [American Beauty], and Emmy-winning director [Six Feet Under], so to say Ball is a well-rounded filmmaker is a bit like saying vampires have fangs, as Matt Hurwitz found out in our May conversation.

ICG: I get the sense from watching the show that you’ve been able to create your own rulebook for how to approach the vampire genre, which must be a lot of fun. Alan Ball: Well, some credit must be given to Charlaine Harris, the woman who wrote the books that the show is based upon. But, it is true, there’s a certain freedom in this kind of storytelling, because of the supernatural element, that I haven’t experienced before. The whole premise of vampires mainstreaming into real life is fascinating. We wanted to avoid all the vampire movie clichés because these are vampires and humans living together in the real world. The vampires don’t have weird prosthetic heads or crazy contact lenses that come out, like we’re used to seeing in movies. They just have fangs, which we designed to look biological as opposed to magical. We modeled them after rattlesnake fangs that lay along the roof of their mouth.

The fangs are a visual effect? When they drop down we use an effect. When the fangs are already in, they are just wearing mouthpieces.

How did you go about creating the overall look? The books take place in Louisiana; I grew up in a part of Georgia that began as rural and, over the course of my life, became suburban, and I was always used to vampires as being either cold, high-tech blue and green light, or the more opulent candles and opera stuff. For True Blood we wanted to take the supernatural and make it not something outside of nature, but more like a deeper manifestation of nature than humans are equipped to perceive. Louisiana is muggy, humid, lots of bugs, messy and cluttered, and that also reflects what’s happening in the story. Six Feet Under was all about keeping emotions at a distance, whereas True Blood is more like we’re just swimming in [emotions].

The series is shot in Los Angeles, with the occasional visit to Louisiana. Yes, and that obviously means the quality of light is quite different in L.A., because you just don’t have the thickness in the air from the humidity that you have in the South. I worked with Checco Varese, AMC, who shot the pilot, and then with Matt [Matthew Jensen, who shares show duties with Tirone] when he came onboard. Over the course of that first year we came up with a look that works within our timeframe, budget, and geographical constraints.

Your production designer, Suzuki Ingerslev, is also from Six Feet Under? Right. My process is to go out and buy books and earmark pages for her for reference, lots and lots of pictures. For example for Sookie’s [main character played by Anna Paquin] house, I wanted it to be one of those houses that’s built onto over the years and sagging a bit, and Suzuki found this amazing salvage yard where she got built-in pieces from old houses to build right into our set. I put in a lot of pictures from my own family up in Sookie’s grandma’s house. I know those houses. I grew up in those kinds of houses.

Speaking of which, the vampire Bill Compton [played by Stephen Moyer] has an interesting house. Bill falls squarely in the category of the brooding, slightly dangerous man who can be won over by the love of a good woman. He’s a character from the Civil War and his family’s house has been around since then. It’s crumbling, in a state of disrepair, a beautiful kind of decay, and I wanted to have something that felt grand and imposing, but still masculine to suit this archetypal-romantic hero. Bill doesn’t need much – plumbing to bathe with, a bed for him and Sookie to make love, and this year we added a projection TV! [Laughing] He has a kitchen. Which he only uses when he has human guests over.

There is a story connected to Bill’s house. For the first season, we shot exteriors for the house at an old plantation down in Louisiana, but were told that we were no longer welcome because the owner was dismayed by the show’s content, which I’m assuming is code for all the sex. The owner was an old Southern gentleman who was very nice, and told us, ‘I probably should have read the script, first. But I don’t want my family’s home associated with this kind of thing.’ And I’m thinking, ‘your family’s home? Where slaves were owned?’ Who exactly is being morally correct, here, you know?

Can you talk briefly about the vampire bar Fangtasia. I view them as the equivalent of speakeasys in the ‘20s, or like gay bars in the ‘50s and ‘60s before they became legal, and I wanted it to be kind of like a dive in that way. Eric [the proprietor] knows there is a market for humans to come hook up with vampires or see the vampires, and he can make some money. But this is Shreveport, not New York or L.A., and he’s not going to spend a lot of money fixing the place up. He painted it red and hung up a bunch of vampire kitsch on the walls. The actual bar is in Long Beach, a biker/rock-and-roll bar that felt perfect.
As noted, you’ve worked with several DPs on this show – Checco Varese for the pilot, John Aronson for several episodes, and now Matthew Jensen and Romeo Tirone trading off. What was your initial direction to them regarding the look of the show? Basically just that everything should be naturally lit, or look like natural lighting. I don’t want that blue light that we know from vampire movies. If we’ve seen it in a movie about vampires, let’s not do it!

But there is a lot of darkness on the show. Obviously, this is a show about vampires and we have to do a lot of night shooting. And that presents certain lighting challenges for the cinematographer(s). But you know they are all so good, and I really defer to them in that area. They are so fast and so skilled at their job. We try to shoot each episode in 10 days, which is a lot for TV. And this show is anywhere from 54, 55, 56 minutes, not 44 like a network broadcast series.

So it sounds like you rely quite a bit on the DP. Honestly, I thank God for cinematographers, because I’m not one of those film school directors who comes in and says, ‘Well, give me this filter and this lens.’ I’m one of those guys who comes in and goes, ‘Guys I need her to look really, uh, vulnerable. Please make it happen!’ [Laughs.] And I’ve been very lucky to work with such amazing people on this show, who can take that kind of input, and then bring their own expertise, talent and art to the table. This show is a big, collaborative venture, and I just hope it continues.

Are you typically writing several episodes ahead? I’m not a showrunner who throws pages at people the day before we shoot. Personally, I couldn’t live with that kind of anxiety. I feel like one of the biggest parts of my job is to make sure the director and the DP have the script to prep for a full two weeks before we start shooting. To not do that seems incredibly disrespectful. Working ahead also allows for time if the symmetry between two actors is really amazing, we can jump ahead to the three scripts we have in the works and make adjustments. My strengths are not in line producing, but rather in getting scripts ready, making them available in plenty of time, and keeping an eye on the overall creative content of the show.

Talk about how the genre allows for bending the old myths, if you will, when you are developing characters. It’s like science fiction. You can create situations where a person’s humanity gets tested in ways that feel fresh and new. The heart of this show is a relationship between a young girl who’s never been able to have a relationship because she could hear the thoughts of whatever man she was with, and a guy who’s been alive for 170 years, lost everybody he ever loved, and is in this lonely, existential place. For those two to find each other and for him to help her discover this part of life she had never thought she could have … and, in the reverse for her to help him rediscover … it’s a profound way to tell a love story with trappings that are just bizarre and crazy.

What do you see as the shows biggest challenges? Mainly just walking that line between this pulpy, Saturday afternoon, movie matinee serial, and a rowdy, realistic flavor that keeps it all grounded; also keeping it all about the stories and the characters and their emotional arcs. As writers, we get to have our cake and eat it, too. We’re pretty faithful to Charlaine’s stories for Sookie, but we also get to come up with all this other stuff for Sam, Jason, and Tara.

This is your second show for HBO. How different are they than a traditional broadcast network? Well, you talk about challenges and those are scaled way back working at HBO. For example, the casting of the show is so incredibly strong; I’m allowed to work with actors who maybe nobody ever knew before. Whereas my experience with the [broadcast] networks is that they want you to come up with something that they recognize from what’s already been successful. They’re terrified of getting outside that box.