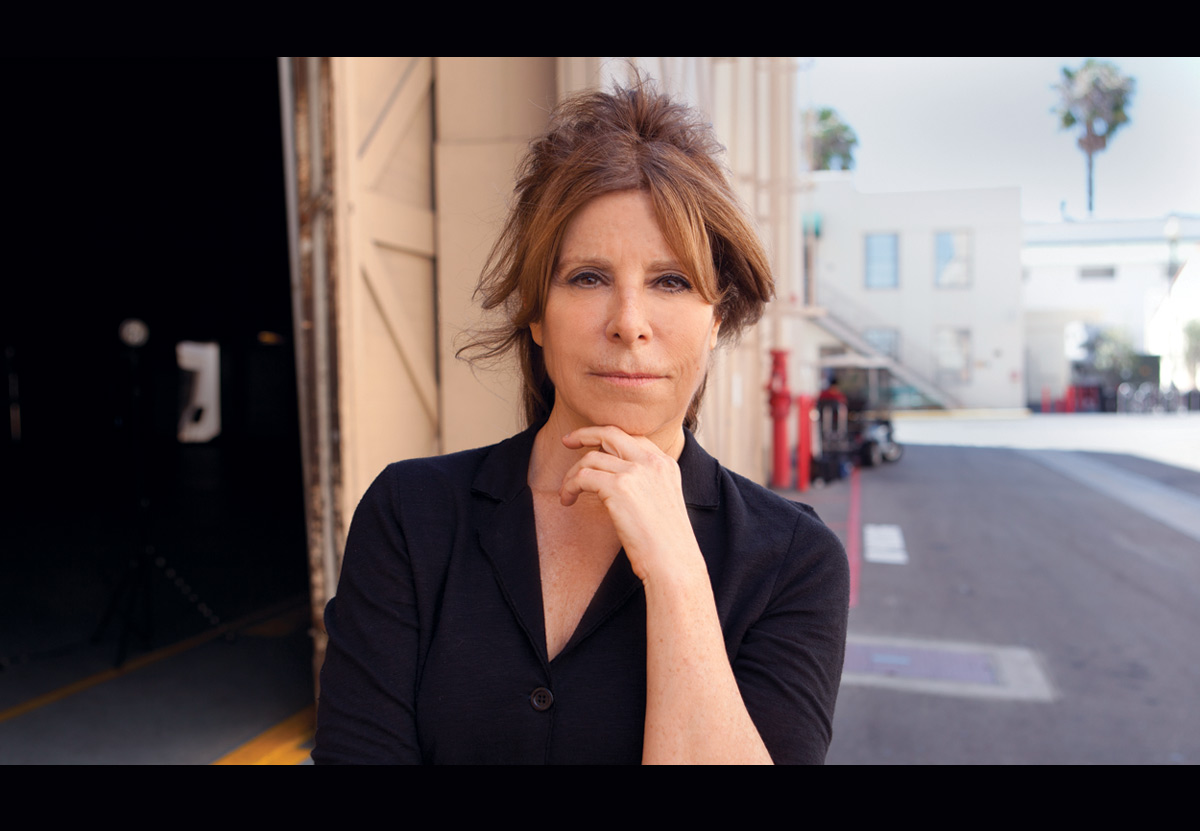 With a career replete with hard-hitting stories, from television, beginning with NYPD Blue to the creation of the cult cop drama Southland, to features like Copycat, Primal Fear, and Public Enemies, it’s easy to think the Oz behind the résumé’s curtain is a macho John Milius type. But, in fact, writer/producer Ann Biderman is mainly about interesting screen creations, having said in past interviews she never felt the need to focus on feminine subject matter. Biderman’s world is filled with flawed characters struggling in stress-filled and hazardous situations. Her latest creation, Ray Donovan, starring Liev Schreiber and Jon Voight, is about a professional fixer whose job – and father – clash with his beloved family. It debuted in June on Showtime to huge ratings. Ted Elrick spoke with Biderman about TV past and present, and how the best part of her job is when the writing’s done.

You started writing episodes of NYPD Blue in 1994? Yes. I had written Copycat, and my agent called and asked if I had any interest in television; Steven Bochco and David Milch needed an episode of this new show written. The show had just come on the air and I thought it was quite good. I felt if I’m going to do this I might as well learn from the best. I wrote a few episodes but didn’t revisit that world again until Southland [2009], which was a huge gap. I had offers over the years but I was busy trying to get films made. I’m actually sorry I waited so long.

Recent comments from people like Steven Spielberg and George Lucas indicate that quality dramatic features have become almost too difficult to get made. You know, I really started to get tired of the whole thing. I found myself going for jobs that I really didn’t want. The rules have changed so much. The kinds of films that I am interested in are now being done almost exclusively on television.

Does that account for the lull between Smilla’s Sense of Snow (1997) and then a roaring return in 2009, writing Public Enemies and creating Southland? I had spent a long time writing a script about Georgia O’Keeffe and Alfred Stieglitz that had come close so many times with different filmmakers. In between, I did a lot of rewriting, where you just come in and punch up scripts, without credit. It was lucrative and helped finance other things I wanted to invest in. Then I spent two years with Michael Mann. I was originally hired to write a script about the world of sports that never got made. As we were coming to the end of that he kind of passed the first draft of Public Enemies across the desk and said, “Do you have any interest in this?”

TNT recently cancelled Southland after five seasons, calling it “one of the best police dramas ever made.” It enjoyed great reviews and a loyal fan base. How did it come about? John Wells and Chris Chulack were interested in doing a cop show, and they called and asked if I would be interested in creating it. Honestly, I wasn’t sure that I had anything new to say about the cops. I had spent time with police officers in a lot of different cities, but I hadn’t spent any time with L.A. cops since I had done Copycat, which was 15 years prior. I didn’t know if I would be interested in doing this, so before I took the job, I went and spent, literally, six months going out with cops all over the city, and at the end of that I felt that, indeed, things had changed so much, this was something I really wanted to do.

One uncomfortable example in the pilot episode, shot by Jonathan Freeman and directed by Allen Coulter, is a dead girl in a star athlete’s bedroom. It is, but at the same time, she did the drugs, not the athlete. He was with her and she did her thing, and he wakes up and finds her dead. He didn’t kill her, which is really clear. I think what comes across is Ray’s empathy for these people; he cares for them. Also, the pilot is a unique animal because there’s so much exposition to get across, you risk being tedious. You really can’t get going until the second episode, so you have to find a balance.

How do you, as the creator and showrunner, assemble a writing team for the series? I thought long and hard about the writers’ room, and from the moment we got picked up I started to cast it. I was looking for original voices. It’s also a tough job because you are asking someone to mimic your voice, and at the same time you want people who are great writers. You also want team players because you’re really married to these other writers for a year. You are living every day together so you want people you can get along with.

How did that work for Ray Donovan? I must have read 150 or 200 scripts. It seemed like everybody was in the CIA and good-looking. It was really annoying. The minute I saw CIA/good looking I just kind of threw it across the room [laughs], and then my assistant would deliver the next box. Ron Nyswaner was nominated for an Academy Award for Philadelphia, and I loved a piece he wrote called Soldier’s Girl. When I heard from Showtime he was interested, I met with him and he said, “I don’t want to be alone in a room anymore. I’m looking for a different kind of experience.” I really understood that, having been a screenwriter alone in a room. As for the others: David Hollander had been a showrunner on The Guardian. Then I got a call from Matt Weiner about a writer on Mad Men, Brett Johnson, who was looking for a change. Then I hired a writer out of England named Sean Conway who had a great series on the BBC called Hit & Miss about a transgender hitman. I read the first script and couldn’t stop reading them. It was like eating bonbons, they were so poetic and dark, strange and intense, and Sean was ready to come abroad for a while.

How involved were you with the casting, such as Liev Schreiber? There isn’t a part in this show I didn’t cast. I worked with a great casting director, John Papsidera. Liev’s name was floated very early and I thought how fortuitous it would be if we could get him. I think it’s the timing. More and more serious actors are realizing that there’s really good work being done on television. He liked the writing and responded to the pilot.

One of the most disturbing moments in the pilot is Jon Voight’s leering at a woman while she is breast-feeding her baby. When David Nevins read the pilot he said that was one of the iconic moments of the script. It was appalling, and it made him laugh, which set the tone for Jon’s character. I think the show is very funny. He’s so appalling, your jaw drops, and he’s also charismatic: that’s Mickey. But it is so disgusting and objectionable.

And the actors who play Ray’s kids are terrific. Was casting kids for this type of show difficult? [Laughs.] Well, there are all these little moppets that come in and shake your hand. They’ve been instructed to look you in the eye, and they’re just, I don’t know how to say this, but they’re kind of frightening. They’re like overly trained Disney moppets, without natural instincts. I must sound horrible!

[Laughs.] That’s why people cast non-professionals, like in Beasts of the Southern Wild. Well, it’s scary because they are so programmed. You want a kid. This was Devon Bagby’s first part and he just had something. He hadn’t been instructed to be cute and winning. He was real and awkward and fabulous. Kerris Dorsey has been on Brothers & Sisters, and was in Moneyball, so I was already her fan. I think she’s an amazing actress.

Tell us about the decision to have Allen Coulter direct the pilot. Like many people, I was a huge fan of The Sopranos. He also did a number of pilots that I thought were interesting – Nurse Jackie, Sons of Anarchy, Damages – and I spoke to the showrunners of all of those shows to understand their experiences. I also admired his features, particularly Hollywoodland.

What is your favorite part of the process – from creation to series? Writers always say this: You love the writing, but it’s even better when you’re done (laughs). It’s a tremendous sense of relief. The pace of TV is relentless, and I like every part about that. I love being on the set, in the casting sessions, and in the writers’ room. Writing, the set and editing are critical, but there isn’t a mix that I don’t go to; there isn’t an edit I am not part of. I work on every musical choice with our composer, Marcelo Zarvos. There are showrunners who just run the room, but I didn’t want to be that kind of showrunner. That’s not to say you don’t get out of the way. For example, I don’t tell Matt Jensen which lenses to use!

Having been on a groundbreaking network show like NYPD Blue, and now having the creative freedoms of cable, you’ve seen the full arc of television programming. Without question. It holds up a mirror to society that is real. There’s a huge shadow side to our culture. I don’t want to sound like [noted psychologist] Jung, but if you can’t express any of that, except in cartoonish ways, I don’t think you’re doing it justice. Television is like dramatic cinema of the 1970s right now, and I would not want to be anywhere else. I don’t want to make films about superheroes, and I’m not an indie sort of girl. I like linear storytelling. To me, this is where it’s at.