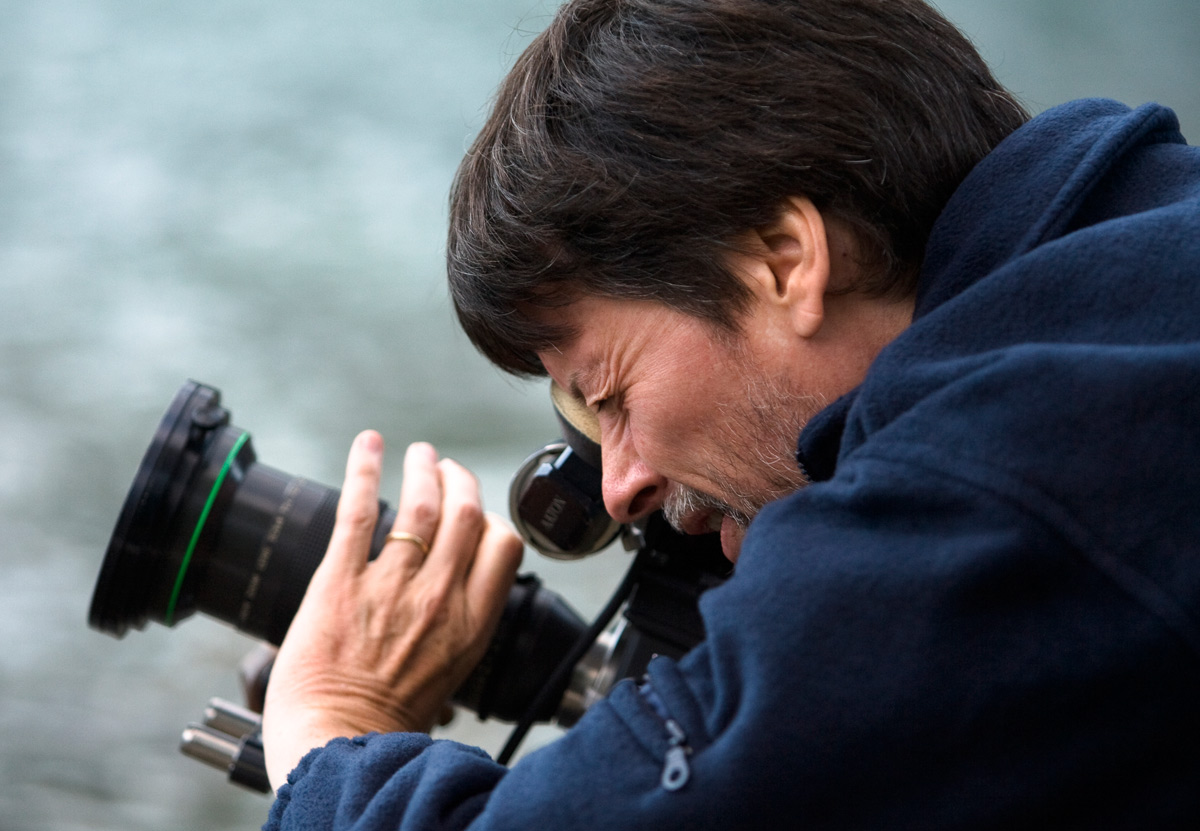 Ken Burns was born in Brooklyn and raised in Ann Arbor, Michigan. He enrolled at Hampshire College in Amherst, Massachusetts, in 1971 with, as he puts its, “a naïve notion of preparing for a career as a narrative filmmaker in the tradition of John Ford or Alfred Hitchcock.” Jerome Liebling and Elaine Mayes were among his mentors on the faculty. They were both still photographers who focused on socially relevant issues.

“(Jerome and Elaine) taught me that there can be more drama in documentaries than in fiction filmmaking,” Burns says. “I also learned to use the camera to look under the surface, and find the meanings and symbolic importance of the images we recorded.”

In 1975, Burns and several classmates, including Buddy Squires, organized Florentine Films. They lived on the edge of poverty, working freelance for the BBC, an Italian TV network, and some industrial film producers.

Brooklyn Bridge was the first of 22 nonfiction films produced under the Florentine Films banner. Subsequent subjects have ranged from Thomas Jefferson and Huey Long biopics to the histories of the Civil War, World War II, baseball and jazz music.

The documentaries produced by Burns and his colleagues form a “living history” of America and Americans that is preserved (on film) for future generations. The nonfiction master’s most recent venture is The National Parks: America’s Best Idea, a 12-hour documentary that premiered on PBS in late September in six two-hour segments.

ICG: You met Buddy Squires while you were students at Hampshire College. This is the 17th time that Buddy has been the principal cinematographer on one of your documentaries. How would you describe his work on The National Parks? Ken Burns: The film that Buddy shot is so spectacular and beautiful that it transcends the idea of just being pretty pictures, and captures the very essence of nature.

Do you think cinematography is in the DNA of people like Buddy? I’m not sure if people are born with a talent for cinematography, but Buddy is one of the hardest working people I know. He never seems satisfied, and is constantly struggling to get better. That’s what makes him exceptional.

You are related to the Scottish poet Robert Burns, who once wrote: “give us the gift of seeing ourselves as others see us.” How about your own DNA? I view all of our documentary projects as processes of discovering who we are.

How did that apply to Baseball (a nine-part documentary that aired on PBS in 1994)? All of my life, I have had a passionate interest in American history. We chose to produce a film about baseball because we felt that it was a more interesting and effective way to understand the history of our country than a political narrative.

The War (2007) was a seven-part documentary about America during World War II. It’s a blend of archival footage, new film at battle sites and interviews with veterans that had never been on camera before. How did you decide whom to interview? We found some 500 veterans in different regions of the countries. We chose a diverse group of 50 of them who had insightful memories to share. We got to know them like they were members of our family, and embraced what we discovered. We were dealing with people who had seen their best friends killed and maimed, and who had been wounded or had close calls themselves. We filmed the interviews in their homes, and in other places where they felt comfortable. Buddy’s lighting was soft and sympathetic. Sometimes it was subtly darker, in tune with the words.

Isn’t that contrary to the philosophy of documentarians who consider lighting and artful cinematography interpretative? We try to honor the people who have graciously agreed to help the past come alive. We light their faces so who they are as human beings is revealed.

What inspired you to produce a film about the U.S. national parks? Dayton Duncan, one of my longtime producing partners, came to me about 10 years ago with the idea of making a documentary about the national parks. We both felt that this subject had only been dealt with in a superficial way. We thought of it as an opportunity to celebrate the special places in our land, which for the first time in human history were set aside not for royalty and the very rich, but for all the people.

When Buddy was a kid his parents took him hiking and camping at various national parks. Did you have that same experience? I didn’t, but the very first shoot that we did was at Yosemite. On the last night, when I should have fallen into a completely exhausted sleep, I remembered that when I was 6 years old, my father took me to Shenandoah National Park. I remembered feeling his hand in mine as we took an impossibly long hike. He sang songs, which have been on the hard drive of my memories. They are songs that I’ve sung to my three daughters as they’ve grown up. I hadn’t remembered where I’d learned those songs until that night at Yosemite.

Were there things that happened during the making of The National Parks that surprised you? I don’t think that we have ever made a film that didn’t surprise and enlighten us. We interviewed compelling human beings who told stories about the histories and the restorative and transformative natures of the parks. We also did the detective work necessary to uncover more than 12,000 still pictures that we drew on to tell the story. We visited archives around the world, both virtually and in person. We looked for pictures of people who were involved in creating the parks, and also of the native people who first owned the land. We also had to fill in some empty spaces. John Muir walked from Wisconsin all the way to Florida before he hiked to Yosemite. He didn’t take photographs, but he kept a journal. We got a copy of his journal and used generic photographs to recreate his journey.

How did you put all of the pieces together? We used new cinematography filmed at locations, archival newsreel footage, old still photographs and interviews. We want the audience to listen as well as watch. We used third person narration that is the voice of God, and first person voices that include reading diaries, newspaper accounts, journals and letters. The trick was to make those letters, journals and newspaper accounts come alive. We also used sound effects, and period and other music that are germane to the subject. We recorded the music before we began editing so that it had a central, organic role in the process.

What about the role of Ansel Adams? He plays a critical role in the last episode. Ansel Adams’ images helped to inspire the conservation movement in the United States, and we used his words as well as his pictures. We also found an invoice that said he was paid $22.22 a day by the U.S. Department of the Interior to photograph the national parks.

What role does a documentary like this play in our society? It’s hard to give you a simple answer. For example, I believe our film The Civil War (1990) shed light on a hugely important part of our history. There’s even evidence that it galvanized attendance at Civil War battle sites by 200 to 300 percent. We produced the national parks documentary because we believe it is an important story, and we certainly hope that it encourages more people to visit the parks.

Do you think of documentaries as history? People try to label me as a historian, but I’m not interested in excavating dry dates, facts and events of the past. I’m interested in the resonance given off by the collision of images, ideas and words. I’m passionate about discovering what it means to be an American. I’m searching for the emotions that motivated our ancestors. That’s what makes history worth knowing.

Many Guild members who read this magazine probably have dreams of becoming narrative film cinematographers. What advice do you have for them? In high school and during my early years at Hampshire College, I dreamed of becoming a feature filmmaker. One of the lessons that I’ve learned is that the same rules govern both mediums. Every story has a beginning, middle and an end, with character development along the way. That’s not a new concept. Aristotle said the same thing about poetry. We are all storytellers.

Why do you produce your documentaries on film? It’s how I choose to express myself like a painter who prefers oils to water colors. We want our stories to feel organic. I just love the look of film and the feelings it evokes.

Are you archiving your projects to assure they will be available to future generations? That’s another reason why we shoot on film. It’s the only proven archival medium. The George Eastman House has some of the master material, and everything else, including final cuts and outtakes, is archived at the University of North Carolina.

John Dowdell, a colorist at Goldcrest Post New York, has worked on every project by Florentine Films since The Statue of Liberty in 1985. He said the Super 16 film shot for The National Parks was scanned at 3K to get all of the colors and tones off the negative, and then was timed with a DI. What are your thoughts about that experience? This isn’t like a narrative movie, where you are manipulating colors for moods. Nature was our gaffer! And just because technology allows you to make blacks blacker or pull details out of dark shadows doesn’t mean that you should. We often shot at sunrise and sunset for the purpose of recording spectacular colors and contrast. We don’t necessarily want to dig details out of highlights or shadows, because we love the mystery that not seeing every detail evokes. It’s also the same with the archival footage that we used. We wanted to be true to the colors and also to the tones of the black-and-white archival images.

What’s next on your agenda? I’m already halfway through editing our next two projects. One is an update of our Baseball series. There were nine episodes or innings. We are now working on the 10th inning, which is a two-part, four-hour update. We are also producing a three-part, six-hour history of Prohibition, and have begun shooting a history of the Dust Bowl. We are also beginning work on a multipart series about the Roosevelts: Theodore, Franklin and Eleanor, and doing preliminary research for a documentary about the history of Vietnam. We’re busy for the next 10 years!