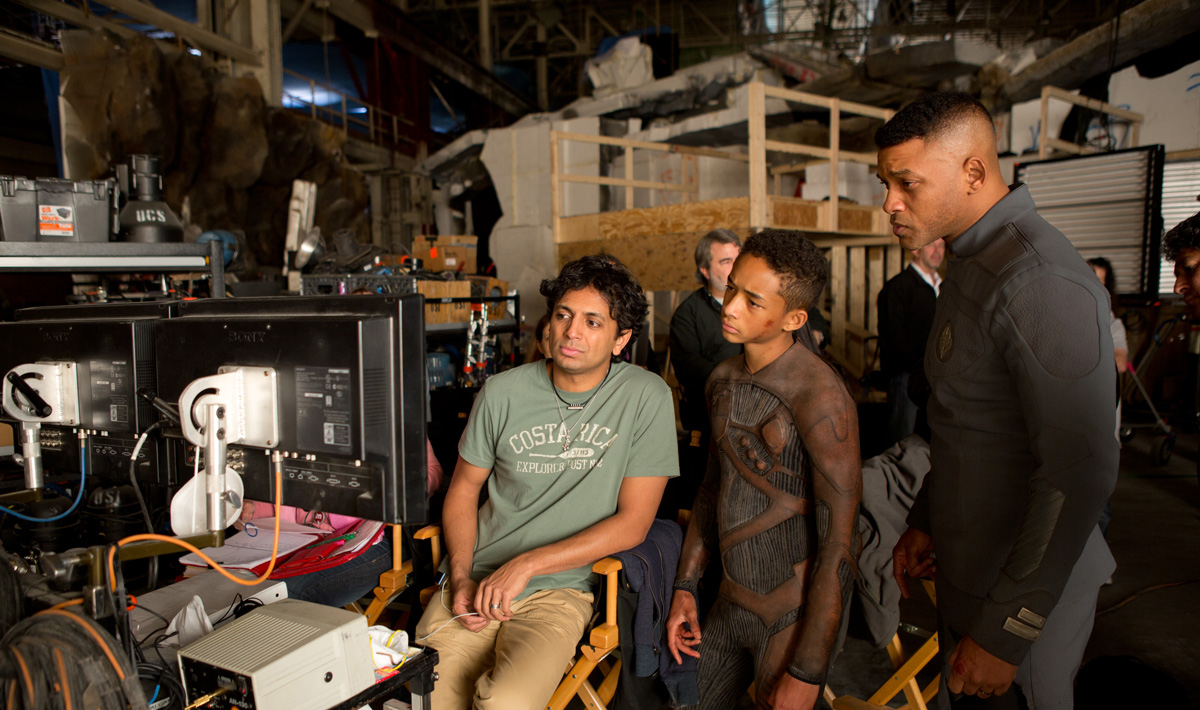 For his latest film, After Earth, M. Night Shyamalan tells the exciting tale of a son desperately trying to save his father, who is trapped in a wrecked spaceship on an apocalyptic Earth. Packed with action sequences, such as the ship’s being bombarded by asteroids and the son’s battling monstrous leopards and a cave creature, Shyamalan called on veteran cinematographer Peter Suschitzky, ASC, BSC, whose credits include Mars Attacks, A History of Violence, and perhaps the best film in all of the Star Wars franchise, The Empire Strikes Back. Interestingly, Suschitzky’s father, Wolfgang, shot such iconic action films as Douglas Hickox’s Theatre of Blood with Vincent Price, and Mike Hodges’ gritty Get Carter, starring Michael Caine. For After Earth, Shyamalan took the untested Sony F65 straight from the assembly line to capture the action in the humid jungles of Costa Rica. Ted Elrick talked with the writer/director about his first experience with a true high-resolution workflow, and how green-screen-heavy movies can impact creative flow.

Why did you select Peter Suschitzky to shoot this movie? M. Night Shyamalan: It was the way Peter used darks in Eastern Promises. There’s one scene of Viggo getting his stars, and he’s sitting on a chair, and the light is really strong on him. It’s a bold choice. Peter’s not afraid to do things to be noticed, yet they don’t look theatrical. And, of course, his work, going all the way back to The Empire Strikes Back, shows he could do any kind of genre I was going to need on this film. When I spoke to him about the movie and the screenplay, he really had a quiet understanding of it that I knew would translate well when it came down to dissecting how to make each scene work.

You originally leaned toward shooting on film, before making comparison tests with digital. I kind of did that as a courtesy to Peter. [Laughs.] But then during one test, I just fell in love with the Sony [F65]. The darks felt right, as did the richness of the colors, and I thought the system leaned to Peter’s strengths. Then I began to understand the practical benefits of shooting digital. Not for all movies, but for our movie. For example, when we were shooting in rainforest and redwood forest canopies, our gaze was very short. Even when there were really low levels of light, the Sony still gave us immense quality and information. It became a no-brainer: we were winning on the creative side and the practical side, and Peter seemed super-comfortable with it.

Did you prepare storyboards before Peter came on? Yes. I always do drafts of how the look of the movie will be and to find my way around how I want to shoot these scenes. When Peter came on, we went through the storyboards and talked through the emotions that I wanted to evoke with both the lighting and color. A lot of those discussions were meant to go into Peter’s head, like an actor compiling subtext. We walked through every scene that way, always looking for the emotional endgame.

Did you use any visual reference material? Peter is an amazing photographer, so we went down to the art department, where I had a year’s worth of look-book stuff. We talked through why I was drawn to a painting or why I was drawn to a photograph, and that would go into Peter’s subconscious and [hopefully] come out when we performed on the day. He came up with his ideas for the lighting and the look of the scene, and very rarely did I come in and say, “This approach is off from what I was thinking,” because we had spent all this intimate time going through it all.

Your production designer, Tom Sanders, said the introduction of biomimicry into the sets added a new level of interest,as if you and he were creating a new genre of science fiction. Tom is an original thinker, so we took a lot of chances, searching for something fresh that would inspire us. I think [our collaboration] made it feel authentic as filmmakers that we were doing something that was plausible; that was almost something that one would wish to be our future. The post-apocalyptic world turning out to be better is kind of an interesting idea that the movie is based on. Tom and I really connected and informed every other department from that – from cinematography to costumes – and everybody benefited from our year of noodling around, conceiving what the future would be like.

[A-camera operator] Mitch Dubin raved about how prepared you were, yet still adaptable to new ideas. Preparation has always been a way for me to work more freely.  I’m so secure that I have a version in my head that I’m more open to hearing a new idea, and when I hear a new idea that is better I go, “That’s it.” You might think all that preparation is constraining, but you know all your moves so you can improvise infinitesimally with each decision and thereby come up with interesting things. I have found in my camera departments, but specifically with After Earth, which kind of was a perfect collection of everyone with Peter and Mitch and Buzz who did the Steadicam, everyone was kind of ignited by this preparation-leading-to-inspiration approach.

There were quite a few green screen shots that needed to be incorporated. What about the 4K workflow eased that process? With the F65 you’re literally looking at a monitor in the jungle, and it’s unbelievably beautiful. It looks like a finished movie! Peter is there in the tent color-timing it as we’re looking at it, and it was so rich and beautiful from the first time that I never had to guess about what the film would look like.  I think the film is nuanced because of [the F65]; it has humanity to it that you wouldn’t necessarily see in an effects movie.

You haven’t done a film with this many CGI shots before. Having effects is hard because I literally have finished the movie before I have some 150 shots still to drop in. Then you see how the creature is going to move exactly, and you go, “Oh wow, I didn’t know that the ash was going to fall from the volcano that way,” or “I didn’t know that the silhouette of the person walking on the horizon was going to have that effect.” You say, “I might have held a little longer,” or “I might have done this.” You feel all those little incremental decisions you’d want to make when you see the finished project.

Taking an untested camera system straight into the Costa Rican rainforest is a gutsy move. What do you think, overall, about the performance of the camera? I’m probably going to be a little bit naïve because all my crew members protect me from all the things that go wrong on the set, so they don’t really tell me when something’s going wrong. I just will look over and say, “Is everything okay?” And they’ll be like, “Yeah, yeah, yeah,” and then they’re working like madmen over the camera. [Laughs.] From my understanding, the few things that did go wrong in the jungle, Sony was right there with support. We never actually went down because of the cameras. And I was never waiting on the cameras at all, so I’d have to say my experience was pretty ideal.

Was there a single most challenging sequence? Without a doubt the hardest sequences are the ones that are all green screen and have a lot of action. That combination is difficult because I am an emotional director, and I like to react and come up with an emotional idea, but there is so little to react off of, and the actors have so little to react off of, so it gets into a different kind of skill set. In those moments you really have to rely on your preparation, the storyboards and the thought process that went into it. A lot of times those sequences are previs, and that was helpful. I really prefer storyboards because, for some reason, my initial inspiration is still there when it’s more 2D, and when it becomes prematurely 3D, I get a bit confused and rely on my original ideas.

What are your thoughts on how action and sci-fi work together? Are there any rules or limitations for something like this, set so far in the future, as opposed to contemporary stories bound by the more familiar world? I think action works very well across all genres, and it helps to bridge some of the issues that arise in sci-fi because of the unfamiliarity of the circumstances. Putting characters in jeopardy immediately connects the audience to the characters. Whereas maybe if they’re standing in a weird room, they won’t connect to it, as opposed to a contemporary room, where a person is standing in a kitchen, they immediately have an emotional reaction to that character, what they’re feeling; they identify. So when we put characters in physical jeopardy, and do a sequence, they relate, and that is a great way to bridge this problem.

Was the large digital rig flexible enough to get into tight spaces and catch all the action? I’m going to have to defer to my handheld guys, Mitch and Buzz, to see how they felt about it.  I thought the handheld work was exceptional, and I attribute that to our world-class operators. I didn’t hear a lot of complaints other than the “take 18” grumbles. [Laughs.]

The asteroid sequence in this film is a centerpiece, and it’s interesting that Peter shot the most memorable asteroid-field sequence to date in The Empire Strikes Back.  Any correlations? Man, now you’re making me feel nervous! I didn’t actually connect the two. For us, the kind of event that makes “the fishing trip” go wrong on this movie, our equivalent of “the fishing trip,” is really kind of fate working its hand on these two individuals to get them into this situation where they have to work out their internal demons. So a lot of our conversations are character-centered and not necessarily environment-driven.