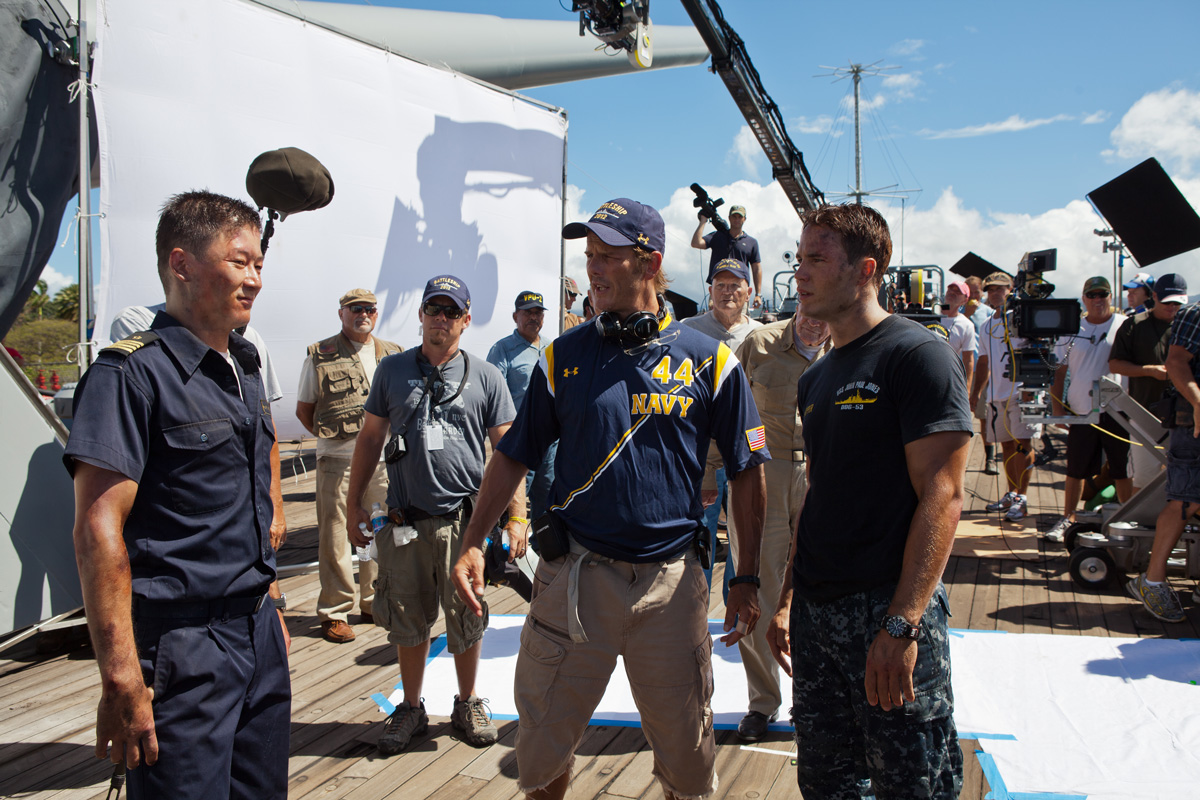 Director Peter Berg has worn many hats in the film business, working in various production capacities before beginning to land acting roles in the late 80s. After appearing in feature fare as diverse as A Midnight Clear, Fire in the Sky, The Great White Hope and Cop Land, Berg took a continuing role on TV’s Chicago Hope. During that show’s run, he wrote and directed episodes, paving the way for his 1998 feature Very Bad Things. He continued to direct theatrical features, including 2004’s Friday Night Lights, which in its latter incarnation on television has allowed him to become a creative force on the small screen as well. His lifelong interest in things military has manifested not only in this month’s epic sea feature, Battleship, but also in the upcoming Lone Survivor, produced under his Film 44 company banner, about Operation Red Wing, a doomed 2005 attempt by the Navy SEALs to capture Bin Laden. Kevin Martin talked with Berg about his love for spectacle and shooting movies alongside the U.S. military.

ICG: After helming smaller-scale, character-oriented stories for features and television, your last three projects have all been epic-sized: Hancock, the Dune remake and now Battleship. Peter Berg: After Hancock, I became interested in larger pictures, wanting to explore filmmaking that had a kind of global reach. When we look back at this period of time in our industry, the definitive films are going to be what I call super-movies. These take audiences to places they’ve never been visually, most often through a large CG component. They don’t just speak to 14-year-olds here, but also to kids in South Korea, 80-year-old grandparents in Brazil and just about everybody in between. Experiencing such diverse feedback on Hancock was really enjoyable, and I wanted more of that. I just came back from traveling the world with an hour of Battleship footage, meeting film-loving people from different cultures who love that kind of escapism and adventure.

Merchandising seems to go part and parcel with the super-movie experience. Did dealing with Hasbro and incorporating nods to the game require some care? One of the fun challenges was figuring cool and fun ways to pay homage to the game. Care had to be taken, because you didn’t want to put something in that would induce groans in the audience. People sometimes act like the game Battleship is a deficit, something to overcome when adapting it, but it actually provides a pretty good engine for a movie. We have tactical situations that recall the puzzling out of an enemy’s location from the game. People remember gameplay as a benign experience, with the calling of letter-number combos. But when you get hit by one of my calls, you become desperate to do the same to me because I have located you and am trying to kill you. That brutal component is at the core of the game, which has been around over 85 years, back when people used to play it with paper, pencils and cardboard. I think they’ll still be playing it long after we’re all gone.

Did the film’s naval setting hold a big appeal? My dad was a naval historian, and I’ve wanted to do a naval film for a long time now. I’d really like to tell the story of John Paul Jones, or of the Indianapolis [cited in Jaws] or the whaling ship Essex, which ended in cannibalism. I’d love to tackle World War II battles like Midway and the search for Bismarck, but those kinds of pictures are often not all that commercial. Whereas Battleship was something that would let me go out on the ocean aboard these huge ships and make a big fun movie.

Logistics for a show this size must have been daunting. What steps did you take during prep to get the show organized? I’m a huge believer in previs, because you can solve problems up front. If everybody knows their part beforehand, it’s even better for me, because I can mix things up a bit without anybody losing the concept. With this kind of film, it’s even more the postvis than the previs that is so important. When you come back from location on a film like this, with aliens and craft still to be added, you’ve really just got plates. On other films, the editor already has an assembly, but when the main component of your shot isn’t even part of the live-action shoot, that can’t happen. So where’s my movie? How do we get it to live enough to be able to cut it properly? Postvis helps get you moving back toward that movie you were making. The main previs guys [HALON Entertainment] also did our postvis, and it really helps keep you going until the point when ILM starts delivering so finals can get cut into the film.

VFX in Hancock were a major part of the storytelling, but this picture is an even larger step in that direction. Getting ILM aboard was one of my first deals with the studio when agreeing to do the film. I couldn’t be happier with those guys. Grady [Cofer, co-VFX supervisor] is just fantastic. We put their guys into the live experience of being at sea on these ships, so they’d know exactly what was needed to make their end match to the reality of the navy at sea. They got a good idea of my style and approach, so they could find ways to bring the realism across I needed to sustain the picture. It is really tough to go from a wide shot of a real destroyer to a medium shot of a CG destroyer, since having to match to the reality of that ship is a lengthy process, one they really earned their money on.

Were you and [DP] Tobias [Schliesser] constrained in any way visually by the cramped realistic recreations of naval vessel interiors? We didn’t use as much handheld as usual. The movie is pretty dynamic, so we use a lot of crane work to move fast and fluidly around parts of the ship. I can do this because the German Sensation [Schliessler] is a great guy, and I won’t make a movie without the hardest-working man in Hollywood. We’re brothers, like Siamese twins, so we’re always on the same page. He knows my preferences and really puts a lot of care and love into lighting and composing shots, and he will just keep going, delivering more and more for a shot till I tell him, “You got it.” Before we shoot [laughs], I usually have to pick him up and physically move him away from the camera.

This was a film show; did you use any other systems? We did some digital shooting, and it’s clear the gap is narrowing between film versus digital in terms of look and what you can accomplish. At the outset, I felt strongly this should be a 35-mm anamorphic project, but there were days when I’d come on the set and see an unfamiliar camera – Tobias had some new Sony system that he wanted to demo. So we’d shoot it and see. When I work with actors, I’m known for improvising – I really don’t like to cut and prefer the repetition of going again and again – and digital lets you do this without running out of film.

You had production jobs but never went to film school. Was there a particular plan for your career when transitioning from acting to filmmaking? I don’t think in those terms. I’ve been doing film and TV and acting and commercials in one form or another since I was in high school. Going onto a film set is largely the same experience regardless of the size and budget, it’s all about creating compelling moments visually, and that always involves actors. Even when there’s a CG component, I always try to visualize fully in order to think about how best to make that aspect compelling – for the actors and the audience – so there is an imperative to watch what we’re putting up there. Acting and filmmaking are just all part of a process of creation, so I don’t distinguish between my first feature Very Bad Things or Friday Night Lights, even though I’ve got Billy Bob Thornton in the latter film. And I don’t really distinguish between that filmmaking experience and that of shooting on an Aegis-class destroyer.

How far back do your filmmaking interests go? I made my first movie, in Super-8, as a high-school sophomore in Connecticut. Two friends are playing the board game Stratego, and after one of the guys gets knocked out, he experiences a fantasy of the game coming to life.

Given the positive portrayal of the military in this film, was obtaining approvals a pretty cut-and-dried process? Approvals were a huge issue. You don’t just get access to Navy assets like Aegis-class destroyers and aircraft carriers. The people I met while going through this are friends now, but they don’t want you to put anything up there that radically opposes naval or DoD policy. Another thing that helped was that we were very specific in our requests, well before shooting, about what we needed: one vessel in dock, these ships at sea, being able to get tech advice and making sure the art department could get aboard to photograph the ships. Act of Valor also dealt with all of this in a really smart way. Early on they found out about eight exercises the navy was going to do, and then they just wound up piggybacking on those, so the navy didn’t have to adjust for them. The military can’t be in the business of working around our schedule, so if you want to avoid problems, don’t ask them to do something they aren’t scheduled to do.

With so much of the film dependent on VFX, is the DI process one that requires a lot of finessing to make it all seamless? DI is not a process of discovery for us because we have an idea going in and there isn’t much call for discussion. You can do so much in DI these days that … [laughs] let’s just say the alterations possible are so extreme, that for some people, all you really need is a bright clear image and then start changing and building from there. On this film, we just talk color, saturation and vibrancy, and as needed we’ll pull references, just to get everybody in synch for the bright, colorful dynamic look. We try to respect the real navy and show their stuff off to good effect while delivering audiences a fun movie.