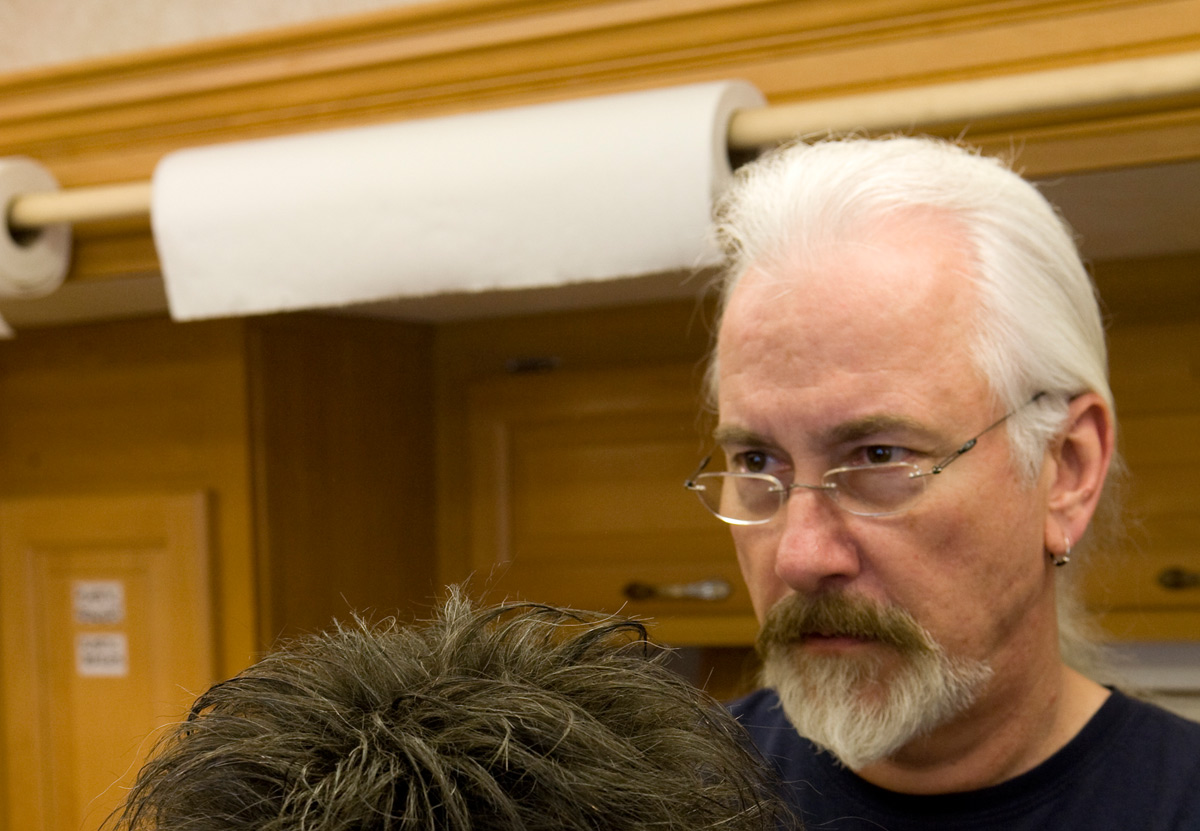 If there is one person in Hollywood worthy of laying claim to the crown worn by Jack P. Pierce – Universal Studios’ makeup genius of the 1930s and ‘40s (Frankenstein, The Mummy, The Wolf Man) – it is Rick Baker. The special effects makeup designer grew up watching monster movies on late night television, and burst into prominence while still in his 20’s, winning an Emmy Award® for his startling aging makeup for Cicely Tyson in The Autobiography of Miss Jane Pittman (1974). Just seven years later, Baker won the first of his six Academy Awards® for John Landis’ horror comedy, An American Werewolf in London. With The Wolfman, starring Benicio del Toro, Baker not only barks back up the same tree that first earned him Oscar gold, but he puts his own spin on Pierce’s 1941 classic, which starred the legendary Lon Chaney, Jr. Matt Hurwitz went throat to nuzzle with the master of creature makeup to hear about Baker’s designs for the newest incarnation of Hollywood’s favorite monster, as well as his thoughts on the classic films that first fired his imagination.

ICG:  How old were you when you saw Jack Pierce’s most famous makeup work, Frankenstein? Rick Baker: I decided I wanted to be a makeup artist when I was 10 and had seen photos of Frankenstein, but I don’t think I actually had seen the movie yet.  I was one of those first generation kids to grow up in front of the TV, and in those days, shows like that were on later than my parents would let me stay up. They would take me out with them because we didn’t have money for a babysitter.  So I’d often get stuck in a room in somebody’s house waiting for my parents.  I remember I came home one night when Frankenstein was on, and begging them to let me watch. I wasn’t scared; I was just fascinated.  I had seen photos of the makeup so much and wanted to see it in action.

Silent era actors like Lon Chaney, Sr often did their own makeup designs. I’ve asked a lot of people who were around in Chaney’s day, (and are now gone), who said there was a fellow named Cecil Holland, who apparently was involved with Chaney, Sr.’s makeups.  I’d like to think he did the makeup initially (for such films as Universal’s Phantom of the Opera and The Hunchback of Notre Dame), but makeups fabricated out of putty require constant repair and maintenance; I would think it would be very taxing on Chaney, Sr. to not only give his performance, but to have to look in a mirror and make sure his face was still on. So he may have had assistance from Cecil Holland. But, with or without help, the makeups were outstanding, and beautifully photographed.

How do you think the cinematography of that era helped canonize those characters? For example, James Whale’s introduction of the Frankenstein Monster, having him come up the stairs backwards and turn around in a stepped reveal, as photographed by Arthur Edeson (ASC). I always thought that was an interesting way to show the Monster.  First of all, you don’t know what the hell you’re looking at.  And he slowly turns around, and you’re shocked.  And then it’s, like, “Oh, yeah?  Well, wait – look at this closer!”  Bam-bam-bam, and then there he is, right in your face. It’s such a great film, and, again, beautiful photography and beautiful makeup.

There are a number of such shots in The Mummy, released the following year and directed by cinematographer Karl Freund (ASC). There’s one shot in that film – a close-up of Karloff, with just a little band of light across his eyes – that is such an iconic frame.  While I was doing Greystoke (The Legend of Tarzan, Lord of the Apes) in England (1984), I would come home after shooting at night and, with only two channels on TV there, ended up doing a painting of that Mummy shot to keep myself entertained.  It eventually turned into a Frankenstein’s Monster instead, because I’ve always been more of a Frankenstein fan than a Mummy fan.

James Whale seemed to be a fan of similar shots, particularly for introducing characters, as seen just a few years later in Bride of Frankenstein. That may be one of the few sequels better than the original movie. All of it is beautifully photographed (by John J. Mescall, ASC), and you see the gradual exposure of a character, the bride (Elsa Lanchester). They have a close-up of her bandaged face, and then rip off the bandages, and you see those eyes, nicely lit, opening up in there. They also had all those crazy shots of her and the others looking up from below with “Dutch” angles.  Like the series of shots with the bride cocking her head with the movements she said were based upon the movements of a swan that she saw in Regents Park, or the ones of Dr. Frankenstein or Pretorius as they bring her to life. I remember seeing those angled shots and going, “Why is the camera so crooked?” I didn’t quite understand it, but I knew I liked it.

In 1941, Pierce created another iconic makeup for The Wolf Man, although that was not his first werewolf. No, he actually had done another one for Werewolf of London in 1935. Oddly enough, Pierce had designed a makeup very similar to what The Wolf Man ended up with six years later.  But they had decided it covered up actor Henry Hull too much. I used to call it the “Elvis werewolf,” because he had sideburns and this widow’s peak. When The Wolf Man came along, Pierce ended up doing what he had wanted to do on Werewolf of London, which was essentially this hairy-faced man with a dog-like nose.  The nose was just hollow rubber, like a Halloween mask, and glued onto Chaney’s nose and upper lip, which is hard to keep on, and it’s not on all the time in the movie!

The wig and forehead and facial hair was loose yak hair that was glued onto Chaney’s face on a daily basis with spirit gum, and trimmed and dressed with a Marcel iron, a curling iron, that looks like a pair of scissors, that you heat up to a very hot temperature. Pierce is known to have burned Chaney several times with that thing. I’ve burned myself with them several times. The finishing touch was actually burning the hair – he heated up the iron too hot, and then ran it across the top of the hair and just singed it, giving it a kinky and fuzzy, animal-like look. Yak hair is good to use, because you get a good blend from hair to skin.  I actually went from yak hair to a much finer hair and even lighter color, closer to the skin color.

What was the process for developing the makeup for this new Wolfman? I was hired early on to do some design, even before they had a finished script.  I said, “You know there’s going to be a wolf man in it, let’s figure out what that is,” and I’d hoped to do it in a couple of weeks. The very first thing I did was paint, in (Adobe) PhotoShop, over a photograph of Benicio, basically, like Lon Chaney, Jr. A lot of people don’t know that Benicio has wanted to play the Wolfman since he was a kid – he was one of those guys who had a big poster of Chaney, Jr. over his bed when he was a boy. Benicio was always coming in to the studio with monster magazines that he’d just bought off of eBay, every time we made him up!  We’d spent too much makeup time looking at those things. And we did get in some arguments.  He thought Glenn Strange (the actor who played the Frankenstein Monster in Universal’s last three Frankenstein films in the 1940s) was the best Frankenstein.  I’m, like, “What the hell are you talking about? You just lost all my respect!” (Laughs.) But we came to an agreement on that (Strange) was very good in Abbott and Costello Meet Frankenstein.

So, after I did those images over Benicio’s photo, I did my own ideas, and then another series that shows the spectrum from man to wolf, to try to narrow down where in the range we all thought the wolf man should be. If man is No. 1 and wolf is No. 10, is he a 5?  Or is he an 8 or is he a 3?  They kept wanting it narrowed down between “this one and that one.”  It ended up eating up all our pre-production time.  In the end, once Joe (director Joe Johnston) came onboard, we still didn’t have an approved design. So, I just did what I wanted to do in the first place as we had run out of time.

Acting through heavy effects makeup can be difficult for some actors.  How did you make sure Benicio’s portrayal could be seen? I’ve been doing this for more than 40 years, so I kind of know what you can and can’t do. Also, because I’ve made myself up so many times, I know firsthand what works, as far as trying to get a performance through it. Though we often use silicone gel-filled appliances, because it’s a very good synthetic flesh, in this case, for the sake of Benicio’s comfort and ease of removal, we used foam rubber pieces. And we still used yak hair, just like Pierce. Nothing innovative here, just really old school approach. As for acting through the makeup, Benicio was great. It’s often frustrating when you do a great makeup on an actor, and they just freeze up. They’ve got something on their face, and they feel like they can’t move, even though they can.  But Benicio’s attitude – and he said this throughout – was “more is more.”  He goes all over the place and puts himself out there.  I loved watching him do his performance and what he did with the makeup.

You’ve won six Oscars® for your makeup designs.  How has this helped your career? The whole problem with winning an Oscar is that people then think you’re going to be very expensive afterwards. In that respect, it hasn’t really helped my career. But to this day, I still can’t believe that I have these awards. My job is what I did for fun, as a kid. And I get to make toys and play with them, and get paid for it, and get free food!  Then when people give you awards on top of that, you get all this praise.  But I don’t do this because somebody gives me an award.  When I started out, there weren’t makeup awards anyway. I do it because I love it, and I try to be as perfect as I can, every time.