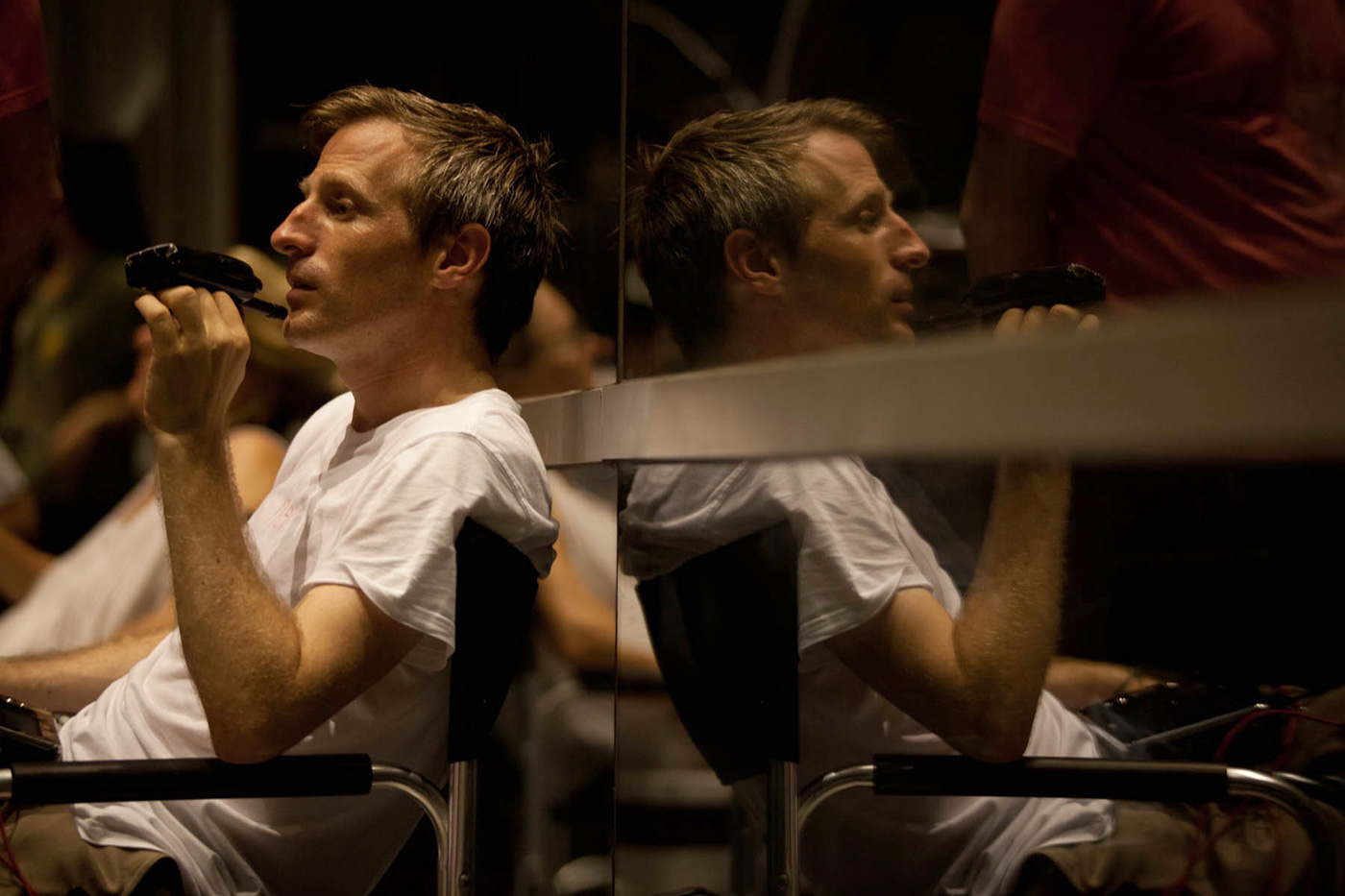 Anyone who’s ever seen a Spike Jonze movie – Where the Wild Things Are, Adaptation, and Being John Malkovich among them – knows how difficult they are to categorize. They come along every five or six years and crash-land, like performance art from another planet. That’s probably as it should be for a Hollywood director whose background includes magazine editor (the awesome Dirt), skateboard company owner (Girl) and music video pioneer (too many accolades to mention).

With his new film Her, the first he has written himself, Jonze enters uncharted emotional territory. Not just because the story centers on a lonely, soon-to-be-divorced Internet scribe (Joaquin Phoenix in an Oscar-worthy turn) who falls in love with an operating system (voiced by Scarlett Johansson). Her, shot by Hoyte van Hoytema, NSC, FSF (Tinker, Tailor, Soldier, Spy; The Fighter, and Chris Nolan’s upcoming Interstellar), undercuts every expectation of its loose affiliation with the sci-fi genre. Set in a warm and fuzzy futuristic L.A., where all needs are met, Her has a found indie quality that owes a lot more to Cassavetes than Cameron.

Speaking with Executive Editor David Geffner, Jonze says a prime inspiration was Last Tango in Paris: “Two people alone in a room where you pretty much forget there’s actors or even a camera,” the filmmaker shared. Her takes you inside Spike Jonze’s room to envision a dance every bit as compelling.

You’ve worked with [DP] Lance Acord [ASC] on all your features. How difficult was changing that key relationship? Spike Jonze: We’ve been this little dysfunctional [filmmaking] family for so long – Lance, [production designer] K.K. Barrett, [1st AD] Thomas Smith, [costume designer] Casey Storm, [producer] Vince Landay – so I knew it would be hard to find someone with a personality and sensitivity that was a good match.

How did you connect with Hoyte? I loved his work, and fittingly, for this movie, we met on Skype. What was supposed to be a quick conversation just went on and on, talking easily, same points of reference. What really stayed with me was how little of his own ego Hoyte wants to put on a film. He has a lot of humility and patience. He really takes time to figure out the best way to serve a story, and I love that about him.

The first half of the movie is mainly inside Theodore’s apartment. Was that a challenge to spend so much time in one small location? The way we approached this film, particularly in those scenes, which came right at the beginning of our schedule and were very intense, mirrors the performances – very stripped down, raw, and intimate. It was really like a small film crew with one camera, a little monitor to check framing, and no video village.

The handheld felt raw and intimate. But the movie also has a consistent visual design, with many fine art elements. We were trying to do two things that don’t usually go together – a designed style that was also emotionally … naked. I remember Joaquin coming in for a wardrobe fitting after a year of our picking apart the emotional beats of the script. He’s trying on these high-waist pants, different colors, thick glasses, with the mustache, and he’s like, ‘I’m confused. You said we were doing Last Tango in Paris?’ And I said, ‘Yeah, we’re doing both.’ [Laughs.] Tons of credit goes to Hoyte and K.K. for creating this warm, colorful, easy world that still conveys disconnection and loneliness.

You began writing the script five years ago, before voice interaction tools like Siri became popular. What was your inspiration? Mostly I was thinking about romantic relationships. But I was aware of how much my own life had sped up [due to technology]: the amount of time I spend with computers, email, texting, and this mass of images and communication we’re expected to react to is a lot for our … humanness. Technology is evolving faster than humanity and that puts a real strain on whatever it is we’re made of.

Physical architecture play a large role in the look of the movie. Yes, and our goal was very specific: what would L.A. look like with lots of new [high-rise] construction? While writing the script, I had thought about Dubai, which is all huge towers in the desert. We looked at Hong Kong, but the streets were too narrow. Eventually we landed on this area of Shanghai called Pudong, which was all built in the last 10 years, very wide boulevards that are offset, like L.A. Because the walkways between all the high rises are like raised bridges, you couldn’t see the street, which meant we wouldn’t have to worry about what cars looked like in our future L.A.

Your films are hard to label. Is it a leap of faith when the studio puts together the marketing campaign? I have so much respect and trust for Sue Kroll and her team at Warner Bros. They are the first people to see the film, and they’re totally open to our ideas. A great example is that the music I listen to when I’m writing often ends up in the trailers. On Where The Wild Things Are they used “Wake Up” by Arcade Fire, which I listened to while writing the movie. And the first trailer for Her included songs I’d written to and used as a temp score while editing – one from Aphex Twin, and “Skeletons” from Yeah, Yeah, Yeahs. They were in the DNA of the script, and it’s to [Warner Bros.’] credit that they organically evolved into the promotion process.

Your influences seem far afield from cinema – pop music, fine art and publishing, even skateboarding. Have they shaped the director you are more than other movies? I’m certainly inspired by other films. Like the shot in Life of Pi where the boy first sees the tiger and jumps from the lifeboat: from deep under the water he sees the ship sinking – his family and everything he knows ending – and then swims back to the surface, with the silhouette of sharks around him. Even thinking about it now … [pauses] I get kind of emotional. One shot that tells a complete story. But I would never know what to do with that in the context of making my own movie. Designing shots for me is all about, How does the camera create a feeling, in that moment, that supports those characters and the story?

Did working digitally alter that in any way? Not at all. I was adamant that we budget for film and digital. I assumed we’d do film during the day and digital at night, because I knew I wanted to shoot that apartment at night and get the city glowing, and that’s something digital does really well. Then Hoyte did a camera test with the Sony, Alexa, and traditional 35, and the Alexa had this creaminess that was a perfect fit for a love story, for the softness of the world we wanted to portray.

Hoyte said the sensitivity of the Alexa allowed him to do things he would never try with film. He was actually taking light away. Along with all the other things I mentioned about Hoyte, he’s also fearless and trusts his intuition. He’s not precious. He’s willing to change everything on the day. He’d say, ‘Let’s just turn off all the lights and shoot with the city [ambient light] coming in through the window,’ and I’d go, ‘Cool, let’s do it,’ because his calmness inspires a lot of trust.

Is there a scene in the movie that brings together all the thoughts you had when you sat down to write this five years ago? There were so many moments like that. So many times I would look over and be grateful for what Joaquin or Hoyte had spontaneously done in the moment. We were pretty brave – we allowed ourselves to make big decisions, which would affect the whole movie, in a single moment.

Do you have an example? We went to China in June and July when Shanghai is super overcast, gloomy and humid. We needed the last shot of the film, which takes place on a rooftop, where you see the entire city, with the sun about to come up. Amy Adams had three days off from rehearsals for a play in Central Park, and she was willing to come to China, shoot for 36 hours, and then go back to New York. It was a real possibility that it would be too overcast during the short time she was there. Also it had been overcast every day we’d been in Shanghai prepping. So there was that point where we were like, ‘Should we pull the plug on bringing her over? The weather forecast is terrible.’ Our first AD, Thomas Smith, said, ‘It will clear. It will be fine.’ But I was really…nervous.

So what happened? We shot all afternoon and night, and drove from one location to another within Shanghai. At one in the morning, on the way to the rooftop location, it was pouring rain – just three hours to sunrise. Thomas said, ‘Don’t worry. It’s just cleaning up for us,’ and I am freaking out. [Laughs]

I bet you were. So, I pass out on the hotel floor, and at three o’clock I wake up because the set is ready. I go upstairs, and as I walk outside, I see the rain has stopped, and the roof is shimmering with water. [Pause] You could see for-ever, every single twinkling light in a city of twenty million. It was incredible. [Pause.] Joaquin and Amy showed up and we did the first take at 4:00 as the sky was just beginning to change. Went down and re-set for another Steadicam take at 4:05 a.m. that covered the whole scene until they get into the close-ups. Chris Haarhoff came over from L.A. to operate Steadicam, and he was incredible. The second Steadicam is a walk-up from the stairs to the roof, and as we moved outside there was this amazing purple dome of light covering the entire city, which was just sparkling. We were jet-lagged, thrashed, and in this raw place. When the camera pulls back to get the very last shot, with Joaquin and Amy sitting together … I was like, ‘Yeah, I think everything is going to be okay.’ [Laughs.]