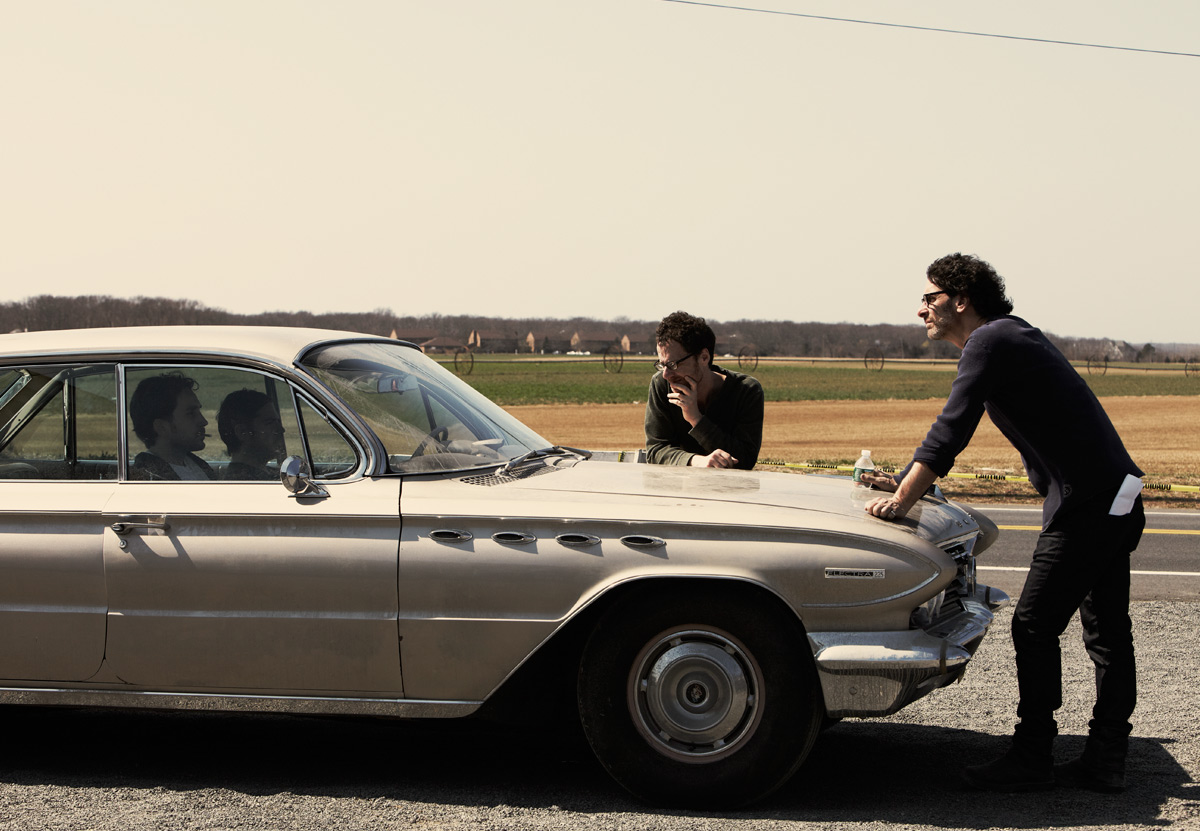 The Coen Brothers – Inside Llewyn Davis

It’s hard to believe it’s been 30 years since Blood Simple, the ferociously compelling debut from Joel and Ethan Coen, thrilled audiences at a little film festival called Sundance. In the ensuing three decades, the brothers have more than lived up to that film’s promise, flexing their creative chops across a bouquet of Hollywood genres – B-gangster film, screwball comedy, western, prison road movie – with a look and feel so unique they all seem “Coenesque,” even though no two look or sound the same.

Cinematographers in the brothers’ firmament get to shine as brightly as the characters that parade before their cameras. They’ve included Barry Sonnenfeld, ASC, Roger Deakins, ASC, BSC (who has earned five Oscar nominations over 11 Coen films), and, for their most current offering, Inside Llewyn Davis, a wintry dark period piece about a struggling New York City folk singer, French cinematographer Bruno Delbonnel, who shot the Coen’s “Tuileries” segment for Paris je t’aime. It’s true the brothers’ creative DNA is so interwoven they finish each other’s sentences. But when ICG Executive Editor David Geffner caught up with them before the Telluride premiere of Inside Llewyn Davis, he mostly discovered two self-deprecating jokesters whose main blind side is stealing from their own remarkable body of work.

You’ve made eleven movies with Roger Deakins, which has to be some kind of modern-day record. How fluid was the switch to Bruno Delbonnel? Joel Coen: [Laughs] Well, we did call him Roger a lot. Ethan: Yeah, all the time. [Laughs] Joel: But Bruno wasn’t a total unknown, as we worked with him for three days on Paris je t’aime. Ethan: Right, and although it was a change after working so long with Roger, for so many films in succession, it didn’t take long at all to get in a groove with Bruno.

The period look in this film is exquisite. Did you have source material to draw from? Joel: Almost none. Ethan: There are some black-and-white still photographs, but there is very little motion-picture footage to look at. Joel: The color look was mainly inspired by the cover of The Freewheelin’ Bob Dylan and the series of stills done for that album.

We see the title character, played by Oscar Issac, all over New York City in the early 60s – day exteriors in Washington Square, the subway platform on the Upper West Side, apartments in Greenwich Village – and they all feel seamless. How hard is that to do? Ethan: It’s so difficult in a way that no one is aware of, except you apparently, so it’s very gratifying to hear you say that. Joel: There is so much to get past, in terms of stuff that is anachronistic, that you either have to take down or shoot around. Ethan: So you end up having to do a fair amount of post-fixes and CGI, more than you would imagine. Joel: Especially in the subway scenes.

Speaking of which, Oscar gets locked out of his crash pad with the owner’s cat, and they both ride down to the Village on the subway. We see the cat staring at his reflection, and it’s beautiful, strange, prescient. Joel: The interior was shot in a period subway at the Subway Museum in New York. The reflection was real, and the exterior was added. Ethan: We also had a little stage set built for a closer reflection of the cat that was essentially a blue-screen composite with plates, which were also altered CGI.

So when you write a cat seeing his reflection on a subway into the script, you’re thinking… Joel: That it will be a huge pain in the ass. [Laughs.] We did a lot of work with cats on The Ladykillers, and they’re impossible to train. Ethan: Just terrible.

I sensed a theme in the lighting, particularly the interiors, with a hard key coming in through a window, and everything falling off to shadow, even to the point of what looked like some vignetting in the corners of the frame. Joel: Bruno is a big fan of manipulating the imagery [in the computer] after it’s been shot. We did tests early on, and in the first few weeks of dailies, experimenting with the amount of desaturation. What you’re talking about is a bit of blooming in the lights.

There’s a key scene toward the end, when Oscar auditions in the club in Chicago. Middle of the day, just him and the owner, with this big daylight key through an open door. Dark and stark, very naturalistic. Was that driven by the narrative? Ethan: Bruno’s very much like Roger in that respect – they both just want to serve the story, rather than make pretty pictures. So, yes, the look and lighting in that scene is designed completely around what’s happening in the story – naturalism, I suppose. You can call it that.

Joel: And the set for that scene was interesting because it created some anxiety for us, Bruno, and Jess [Gonchor], our production designer. It was an empty theater that was, essentially, just a black box with seats. There was a lot of discussion about how much light should go up on the walls, how many details should go up on the walls, and what we wanted the feeling to be, which was, as you say, a closed-up theater in the middle of the day. The challenge was how to create visual interest given how stark and barren the room is. Bruno’s solution was fantastic: kick all that light through the open doorway and allow just enough detail to get a sense of the space, but not so much that it takes away from the feeling we wanted to achieve.

Shooting musical performance scenes, of which there are many in this movie, is tough for the DP, because it often means multiple cameras. Ethan: We occasionally used two cameras in the main club. But mostly it was single camera, shot live. The musicians Oscar played with – he did his own singing and playing – had an unusual metronomic sense of rhythm, and that allowed us to combine takes. It was a weird, lucky thing that we could shoot single camera live, not have to relight takes, and combine pieces in editorial. Joel: And Oscar never had a click track. He played free and we just cut the songs like we would a dramatic scene, from take to take, whenever we wanted, without a tempo issue.

The Kennedy folk-pop song in the studio on which Oscar plays had a click track? Joel: Yes, that was shot with multiple cameras and a prerecorded guitar rhythm track that kept them all locked to the sync and tempo. Ethan: Also, that scene was lit for multiple cameras, much brighter in the studio, and Bruno was able to cover everyone without a problem. The main club in the Village was a different story, lighting-wise.

One online comment posted to the film’s trailer was: “Someone please wipe off the lens!” The look is period – it’s soft and filmic. I’m wondering what you think of a new generation weaned on digital? Joel: It’s the common theme of all cinematographers these days, isn’t it? “It’s too fucking sharp!” [Both Coens laugh.] Joel: This is something we talked about a lot, and we’re in the school that film is already too sharp. You don’t need to make it sharper. All movie photography since the beginning has been about knocking the sharpness down… Ethan: With lights, and scrims, and diffusion…sharpness is not your friend! Joel: Bruno specifically complained about how [filmgoers] are being eye-trained to expect this super-sharpness. Ethan: It’s just not to our taste.

Younger audiences may never have even seen a film dissolve. Does it take the Coen brothers doing a period film to revive it? [Laughs]. Ethan: I hadn’t thought about it, but that’s true. No one uses long dissolves anymore. Joel: We just take it as a beautiful way to transition between scenes and images, but I guess you’re right. It’s a long-lost art.

Speaking of art, O Brother Where Art Thou? is credited as being the first DI. Did it feel, at that time, like a seismic change in how much control the director and DP could have? Joel: I think a little bit. There was a specific problem with that film that we could not solve photo-chemically, and when we were able to do it in a computer, it was like: “Wow, there’s a new way of changing the color and imagery.” Ethan: Yes, but I don’t think we had a sense that [digital color grading] would become the industry standard. Joel: Well, I don’t know. EFILM did it essentially for free, and they were developing it as a new tool for wider applications … so it was a big deal, sort of …

Your films, particularly with Roger, have earned a fair amount of Oscar nominations for cinematography. Is that mainly from just respecting the DP’s craft? Joel: Yeah. We work with great DPs and basically let them do their thing. It’s not any more complicated than that, I feel. Ethan: Yeah, definitely.

Do you have a favorite film in your résumé in terms of the look and what you set out to achieve? Joel: I don’t know about a favorite, but this experience with Bruno was really close to where we started, in terms of all the visual references. Ethan: You look at the movie now, and it’s like: “Yeah, that was the plan.” I also think The Man Who Wasn’t There was a very special film, in terms of Roger’s being able to shoot black and white. It’s so commercially difficult. Joel: Also, I would throw in No Country For Old Men, because Roger was just in this unbelievably great zone. The imagery was so evocative throughout that show.

Inside Llewyn Davis reminded me of my favorite Coen film – Miller’s Crossing. It’s like a slow burn where things keep getting worse even though you’re hoping they get better. Do you worry about repeating yourself? Joel: Yes. [Laughs]. We used not to give a shit, but there’s no doubt it’s an occupational hazard at this point in our lives. [Laughs]. Ethan: It happens all the time. We look at each other on the set and go: “Haven’t we done this before?” Joel: The most glaring example to me was shooting Fargo. We were up on a highway in the middle of the night, parked car on the side of the road with its headlights on and an oncoming vehicle with headlights. Totally unlit, except for the vehicle lights. It was exactly like a shot we did in Blood Simple, and I was… Ethan: Oh, man. We’re still doing that?

This issue is themed around a new generation of filmmakers taking risks. You guys are still pushing the envelope, 30 years after you won the Grand Jury Prize at Sundance, when you were the next generation. How much has changed? Ethan: Thanks for that, but the difference really from now to then is mostly that we don’t need to take risks anymore – we can just steal from our past films. [Both laugh.]