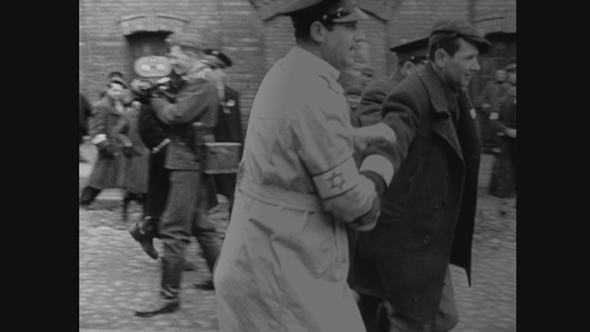 “The thought that these people would be systematically murdered never entered my mind. The SS brought us Jews who they wanted us to film. We could see the fear on their faces.”

Prehistoric artists sculpted statues out of marble. The ancient Egyptians carved hieroglyphics on the Rosetta stone. Rembrandt painted on canvas and stories were written on parchment until the Guttenberg press printed words on paper. Those were the mediums our ancestors used to preserve stories about their worlds for future generations. Images captured on film are the universal language and the Rosetta stone of our times.

That thoughtful and eloquent observation by Guillermo Navarro, ASC, AMC is an ideal prelude for a story about a documentary that pulls audiences deep inside the horrors of the Nazi-controlled Warsaw ghetto in Poland during World War II.

A Film Unfinished consists primarily of archival footage that German cameramen recorded in May 1942 for a propaganda film that was never shown to the public. The archival footage is augmented with haunting close-up shots of the faces of one male and four female survivors who share their memories, thoughts and feelings.

The survivors were teenagers or even younger during those dark days in the ghetto, where some 600,000 human beings lived in wretched conditions behind walls in a three-square-mile area. Many inside died of starvation, typhus and other sicknesses. The survivors were shipped to a concentration camp where almost all of them were murdered.

A Film Unfinished premiered on U.S. cinema screens in August. It was produced by Schory and Itay Ken-Tor, which manages Belfilms LTD, the entity that financed the project (with additional support provided by Israel’s New Foundation for Cinema and Television, the Yad Vashem Project and YES Docu).

The idea for making a documentary using Nazi propaganda footage was conceived by Yael Hersonski. She is an Israeli citizen who graduated from the Sam Spiegel Film & Television School in her native land in 2003. Her grandmother was among a relatively small group of people who survived living in the ghetto.

Hersonski launched her career editing a weekly television documentary program in Israel. This was her first turn at the helm on a feature length film.

“A Film Unfinished emerged out of my preoccupation with the notion of the perpetrators of war crimes creating an archive that testifies to the suffering of their victims,” she explains. “The systematic documentation of these horrors has changed forever how the past is archived. These images have been used in many films. In the worst cases, they have been presented as straight-forward historical truth.”

Hersonski expressed those feelings in a 2006 essay she wrote and sent to Noemi Schory, an Israeli film producer who worked on the opening of the visual center at the National Holocaust Museum in Jerusalem in 2005. It features around 100 short films that integrate archival footage.

“Noemi told me about a diary, written by a 15-year-old girl who described a German camera crew making a propaganda film in the ghetto,” the filmmaker adds.

About a month later, Hersonski arranged to watch a copy of the 62-minute propaganda film that was never finished and released by the Nazis.

“After so many years of being bombarded with films about the Holocaust, I was shocked that I didn’t know anything about this film,” she reports. “Until you see it, you can’t understand the evil behind it’s making, and the distorted ways it was used in dozens of documentaries after the war. I asked myself: ‘how can a propaganda film shot from the point of view of the perpetrator of a crime truly reflect the realities facing the victims?’”

To find the answer, Hersonski traveled to Berlin to meet the archivists at the facility where the film was found. That’s when she discovered that there was no documentation about who initiated the project and why the Germans didn’t use the propaganda film.

“During the 1960s, a historian who was doing research came upon an entry permit to the ghetto for a German cameraman named Willy Wist,” Hersonski continues, adding that her subsequent research revealed Wist had testified at the Nuremberg Trials.

“We had no idea what was happening until we arrived,” Wist had recalled in his testimony at the infamous war crime proceedings. “The thought that these people would be systematically murdered never entered my mind. The SS brought us Jews who they wanted us to film. We could see the fear on their faces.”

Wist said that after 30 days, the film crews packed their gear and went home.

Another piece of the puzzle came together in 1998, when British historian Adrian Wood was searching an archive for footage from the 1936 Olympic Games. He found two cans labeled Das Ghetto in a vault on an American Air Force base. They contained 30 minutes of black-and-white outtakes of staged scenes depicting rich Jews in the ghetto seemingly oblivious to the plight of the people around them.

They were well dressed, comfortably housed, lavishly fed and entertained while ignoring the ghetto’s many sick and dying inhabitants. There are shots of the director of the Jewish Council sitting at his desk, seemingly dictating policy in the ghetto. There are shots of rich people walking down a street, ignoring beggars and the bodies of desperate people who committed suicide by jumping out of windows.

Hersonski also weaved outtakes with SS guards accidently filmed in backgrounds supervising staged shots into the fabric of her documentary.

A researcher tracked down nine survivors who were teenagers or younger when the Nazis herded them into the ghetto. They lived in Israel, England, Poland and the United States. Hersonski contacted them and asked if they would be willing to share their memories while watching some of the archival film.

“I explained in detail what they were going to see, and asked if they were absolutely certain they could stand the shock,” she recounts. “I was relieved when five of them were more than willing to come. They felt it their task to have the final word.”

Hersonski says she decided to isolate each survivor, one at a time, inside a dark theater, so the experience of watching the film would be more intense.

“We filmed the five survivors one at a time in color in contrast to the black-and-white archival film that they were watching. That allowed us to recreate the realities of what happened in black and white as though the film was a time capsule while the witnesses share their memories in present time.”

Israeli cinematographer Itay Neeman had to be totally nonintrusive while choosing angles and composing images that visually punctuate the emotional tones. He occasionally used a beam of light flowing from a projector to backlight a silhouette of a witness sitting in the dark theater. He also used illumination reflecting off the screen to cut through the darkness and light the person’s eyes and other parts of their face.

There is an archival shot of desperate people searching for food in piles of trash at a garbage dump. The film cuts to a close-up of a survivor recalling what it was like searching for scraps of food in that same dump, when she was 10 years old.

“It was important to be focused on their faces, almost like a portrait painting,” Hersonski adds. “Their faces reveal everything… just like the faces of the people in the ghetto who were captured on film were acting out their true emotions through their gazes into the camera lens, resisting the cinematic manipulation in the most quiet, human way.”

One anguished survivor asked Hersonski, “What if I see my mother?”

“After each session, I was physically numb and mentally worn out,” Hersonski says, adding that Itay Neeman is “one of the best cinematographers in Israel. I hope that I will be able to work with him on every film I’ll be making in the future.”

Other testimonies to the realities of the crimes committed were found in diaries that the director of the Jewish Council and other people kept at great personal risk. A narrator read appropriate words chosen from diaries to verbally punctuate the images.

“A time will come when no survivors are left,” Hersonski observes. “The archival footage, unlike paper documents, bears a much more layered testimony regarding the realities it witnesses. It will remain as our source of understanding our history. The film will testify to the crimes that were committed.”

The final chapter in this story was written when the Motion Picture Producers Association (MPAA) gave A Film Unfinished an R rating, because “the film contains disturbing images of Holocaust atrocities, including graphic nudity.”

For the record, there are no violent scenes in A Film Unfinished. There are just the realities of what life was like in the ghetto. The graphic nudity is a staged scene culled from the Nazi propaganda film where several naked men and women separately step into a pool described as a ritual bath for rich Jews.

Hersonski and Oscilloscope Laboratory President Adam Yauch unsuccessfully appealed the R rating. Afterwards, Yauch observed, “In a world where young people are bombarded with meaningless entertainment it’s unfortunate that a film with real educational and historic value would be denied to them, by an organization that is supposed to be working to help them.”

Echoes of more a timeless observation that George Santayana made in The Age of Reason in 1905, “Those who can’t remember the past are condemned to repeat it.”

By Bob Fisher. All photos courtesy of Oscilloscope Laboratories.