Following up on the success of its ultra-clever stop-motion features Coraline and ParaNorman, Laika Studios, an animation outpost proudly ensconced far from Hollywood (in Hillsboro, OR), presents The Boxtrolls, a sublime Victorian-era fantasy focusing on the travails and misadventures of subterranean scavengers. By Kevin H. Martin.

The film’s “heroes” wear cardboard boxes that function as their cover when venturing topside, and the trolls are seen (quite wrong-headedly) as both semimythical and extremely dangerous by the English villagers above ground. Demonstrating as much of a sense of family as the humans who fear them (and happily lacking human class distinctions), the trolls adopt a young abandoned boy (voiced by Isaac Hempstead Wright) named “Eggs,” after the label on his crate disguise. This act of troll kindness pays unexpected dividends later on in the tale, when the evil pest exterminator, Archibald Snatcher (Sir Ben Kingsley), attempts to destroy the entire boxtroll nation.

For producer and lead animator Travis Knight, the company’s long history with dimensional animation (Laika began as Will Vinton Studios) is a tradition to be respected, but also augmented by technical advances.

“These kinds of films have a genuinely handcrafted quality,” Knight explains, “which carries an enormous appeal. But we’ve found that embellishing the look through CG can actually give the films a greater scope than would otherwise have been possible.”

Co-directors Anthony Stacchi and Graham Annable cite the exacting skillsets of the core team members, most of whom have been with Laika through many projects.

“You could do a tour of these sets, getting up close in the market square to scrutinize every loaf of bread in a cart,” Stacchi reveals, “and it would all hold up because of the loving craftsmanship. The same is true for the costumes, which, while armatured for control, are often made from real materials, providing another level of credibility.”

That’s why Creative Supervisor of Puppet Fabrication Georgina Hayns saw to countless technical and artistic details involved in fashioning the characters, ranging from incorporation of electronics into the troll heads for their glowing eyes to the employment of laser cutting for scaled-down costuming details. Likewise for Costume Designer Deborah Cook, who relied upon an embroidery sewing machine to weave together Eggs’ sweater of many subtle colorations and exploited leather gloves as needed to create shoes and other character accoutrements.

“There’s a kind of collective consciousness [at Laika],” Annable adds. “Even if all the problems for a given scene haven’t been fully solved in advance, everybody knows which shots are coming up, and the attention gets paid to thinking through matters before we’re on stage and ready to go. That might mean making sure our animation rigger [Oliver Jones] has all the resources necessary so that we can put a special character through his paces or allocating enough time for [Miniature Lighting Engineer Matthew DeLeu] to test modifications to the next stage setup.”

Laika’s thirst for innovation reached new heights on The Boxtrolls via the new arena of 3D printing. Director of Rapid Prototyping Brian McLean’s team used 3D printing to translate creature designs into a virtual (and physical) flipbook of expressions for the visage of every character.

Steve Emerson and Brian Van’t Hul served as VFX supervisors, overseeing CGI elements for The Boxtrolls. “We’re always trying to gauge and allocate resources most efficiently,” Emerson relates, “and that means getting all the department heads together in a room to figure out what gets built practically and what will be a digital extension.

“If there is just one enormous wide view to show the whole city,” he continues, “then we’d seriously consider handling that on the VFX side of things. On shots that show a large, practically built environment, we take the buildings much higher than they can be physically built on stage.”

Emerson says, “having to match [digitally] with what they’ve done on stage keeps us honest, because our work has to seem just as real and tactile as the model end of things. The art department supplies us with physical looks for clouds and water, so we all have the same aesthetic notion, and it will be one that blends with the style established on stage.”

The interface between VFX and stage camera is crucial to matching that aesthetic. “We added a lot of CG characters to backgrounds of some complex scenes,” Emerson continues, explaining that a green screen shape, dubbed a “chopper” or “hatchet,” would be lowered into the mid-ground to isolate the hero puppets from the background, facilitating the addition of CG extras behind them. “[We’d] have to kill the green to keep it from contaminating the set environment. Foreground light goes out when the screen comes in, getting us a nice silhouette matte, so we have extractions that are pretty clean right out of the gate.”

Cinematographer John Ashlee Prat, who began his career in stop-motion as a claymation animator working on those memorable 1980s icons The California Raisins, embraces Laika’s mix of in-camera and CG elements.

“It has always been difficult to direct dust elements and maintain atmospheric levels on a strictly in-camera show,” Prat explains. “You’d be employing a mix of cotton balls and filters and perhaps paintings on glass, whereas now we can let that be addressed digitally … if that approach is what best tells the story.”

In addition to Prat, four cinematographers (credited as “lighting cameramen”) captured many of the film’s setups. Mark Stewart and Chris Peterson were Laika veterans, while Local 600 members Pat Sweeney and Eric Adkins also brought in years of experience, shooting unreal-time setups with and without motion control.

Sweeney, whose years at ILM involved shooting starships against blue screen and submarines in smoked faux-water settings, was a camera operator on the Selick/Burton stop-motion feature The Nightmare Before Christmas. He recalls how the size of the camera on that project impacted his approach. 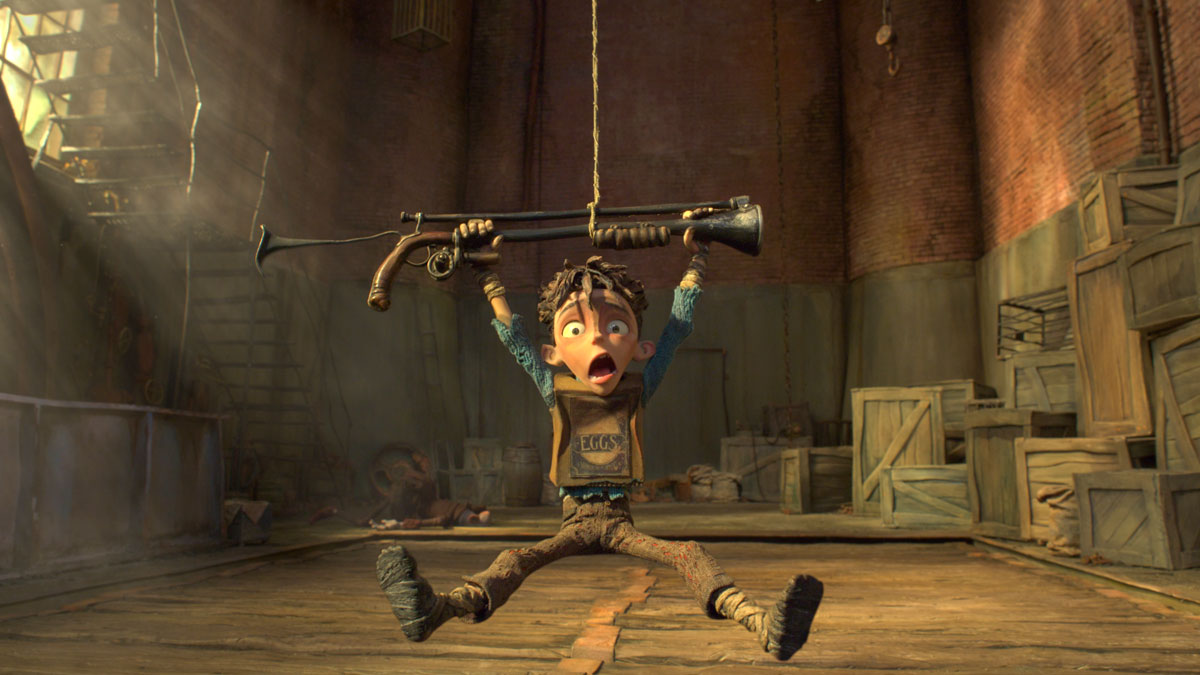 “Back then, we used Mitchell 35-millimeter cameras and had to light around the magazines!” Sweeney exclaims. “Digital cameras are so small, they allow for much easier lighting and animator access. But in terms of achieving a look, film had that inherent softness, so it was easier to create depth. Digital has progressed, and is a sharper capture medium, so care in lighting is of paramount importance. It might be more critical now than ever before, since everybody with an iPhone thinks they’re a camera operator.”

Each lighting cameraman tackled four to six sequences, which, when possible, would be consecutive to maintain continuity. Stewart had the lion’s share of Market Square shots, while Adkins drew most of the underground sets, including a 700-frame reveal of the cavern inhabited by the titular characters.

“Sometimes, when you get really excited about possibilities, it can distract away from what is important,” observes Prat. “So having a team where everybody is focused on the big picture can help you to take a step back and reconsider what the shot is about. In this case, it was Eggs’ ride down [the sewer drain], which introduces the boy and the audience to this beautifully cluttered fantasy world. It really showcased how Eric’s genius for using dental mirrors to reflect appropriately scaled highlights into the frame enhanced this magical place.”

Weeks of work went into lighting the cavern reveal, which then took more than a month of stage time to animate and shoot. “The cavern walls were eight feet tall,” Adkins recounts. “In a real set, I might not have had space to put light in an ideal location, so that was a consideration I kept in mind. Using different kinds of sources and colors of light also helped emphasize the depth and size of the cavern these creatures call home.” Adkins’ entry onto the show came with the film’s longest single take, an early shot that runs fifty-five seconds and encompasses nearly all of a large three-walled street set.

“That was a continuation from John’s opening sequence with the trolls in an alley,” Adkins states. “We had stage in all directions – no green screen backing whatsoever – and began with a moonlit close-up on one boxtroll. When the evil boxcatchers spy the trolls, the camera moves to take in the headlight on their vehicle as it comes to camera, then follows it away.”

Finessing of the shot’s final details was not fully accomplished until halfway through rehearsal; capturing via motion control enabled the shot to be assembled out of multiple repeat passes.

“A background character might be on a part of the stage that was so out of the way that it would be easier for the animator to access him on a separate pass,” Adkins continues. As an additional aid to VFX character replication, production often shot additional blank passes with and without the key light, which provided a better idea about the ambient light levels in any given environment.

Most sequences were shot for maximum depth of field at F/16, but Adkins was able to inject a different feel for the film’s dancing sequence. “I have these beautiful Cooke zoom lenses,” he shares. “They have flaws in the focus around the edge, which provided a soft, glamorous feeling for this one sequence. It was nice to have this shallow-focus look as we go in on Madame Frou Frou’s face.”

Sweeney’s sequences took place near the end. “Mine were mostly outdoors,” he recalls, “taking place between sunup and midday. We needed to ensure the principal characters stood out a bit from their environment, enough so your eye would go to them. That involved my coloring the characters a little cooler than the generally warm backgrounds. I also increased the light intensity on the foreground characters ever so slightly.”

The Guild shooter even provided a modified key specifically to put the hero puppets in a better light. “I had custom keys and backlights designed to work through the length of a shot,” he continues, “even though it wasn’t necessarily correct with respect to the general key light for the rest of the scene. Making sure a character looks good is a camera operator’s responsibility whether that character is flesh and blood or in puppet form.”

Increasing the stereoscopic depth was another option for emphasizing the principal characters. Such an approach was meant to emphasize the huge menace of Snatcher’s Mecha-Drill, which recalled ILM’s steampunk-era Imperial Walker as seen in 1998’s Wild Wild West feature. The drill was of immense size for a stop-motion construct, and it featured flame-powered innards that were represented on set via an iPad placed within the behemoth’s body, playing back CG flames.

Annable says the strongest memories of his maiden directorial effort revolved around the sense of inspired improvisation that powers Laika. It’s a mindset that gently reinforces the Oregon state motto (which came into being roughly the same time as Laika itself): “We love dreamers.”

“One example of how things worked on [The Boxtrolls] has to do with the film’s opening, when we see their shadows on the walls as they scurry about,” Annable recalls. “Giving that to VFX was a natural first thought, probably as digital shadows added to a set plate. But John let us know he’d tackled this kind of thing practically. We went out on stage and saw how using our lights to cast real puppet shadows onto the walls just couldn’t be beat in terms of feel. That kind of discovery keeps [Laika Studios] a very exciting place to be, where we like to say, ‘Best idea wins.’”