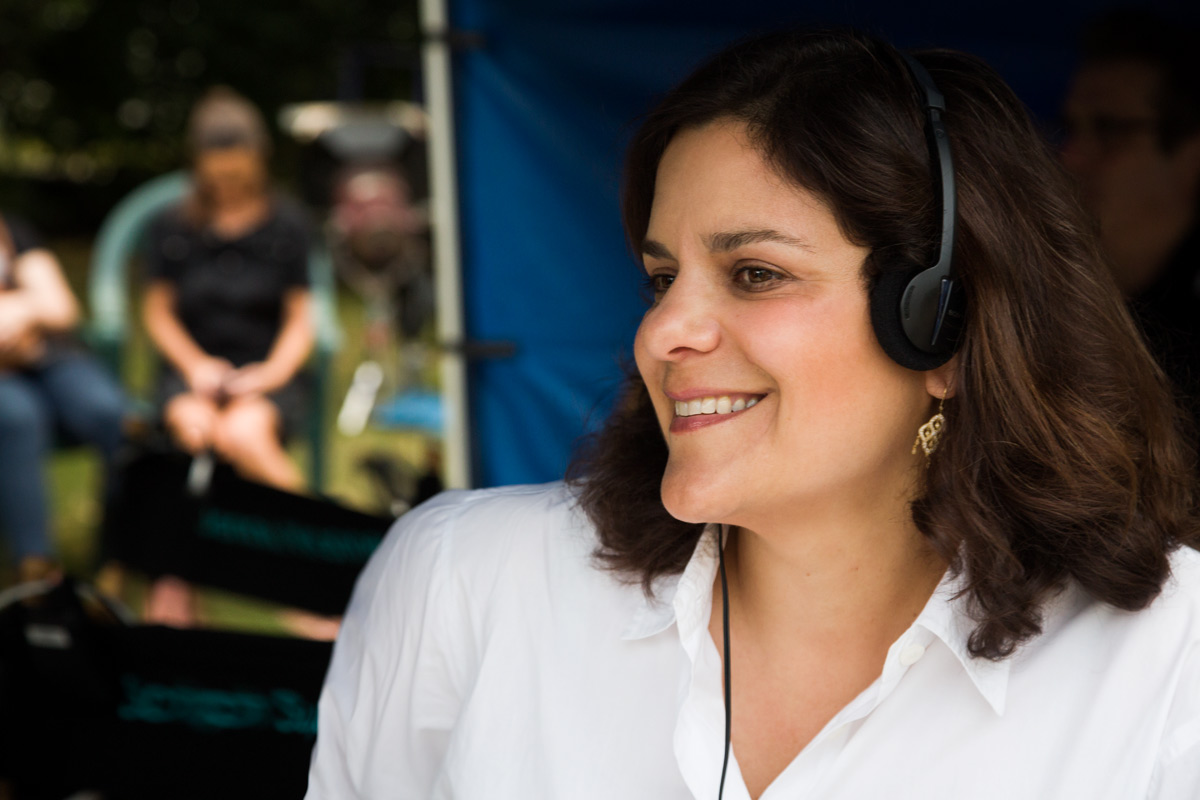 If things had worked out the way Ilene Landress had planned, she’d be practicing her bedside manner instead of organizing the cast and crew of HBO’s hit series Girls.

And she’s got Paul Hogan to thank for it.

“I had no film training whatsoever,” laughs Landress about her serendipitous start in the film business. “I got into medical school, but I really just wanted to work in the movies.” Though she had no connections, Landress had the good instinct to know that the best way to get her foot in the door was to shove it in. And she saw her chance when she happened upon the Crocodile Dundee team filming on the streets of New York. “I said I’d work for free for a few days, and they hired me as a PA. I believe I was the cigarettes-and-beer PA,” Landress recalls.

Putting her medical career on a one-year deferment, Landress segued into budgeting, scheduling, and accounting, all of which led her to her current status as a go-to producer for HBO, where she has spent the past 15 years working as an executive producer and unit production manager on The Sopranos, Mildred Pierce, and Girls. As she prepared to wrap the fourth season of Lena Dunham’s much buzzed-about series, Landress spoke to Jennifer M. Wood about New York City’s changing landscape and “The Girls-ification” of Brooklyn.

ICG: How would you describe your role? There aren’t that many people like me in television who are non-writing executive producers – you see a zillion producer credits at the end of the show, but most of them are writers. I guess I would describe myself as a sheepherder, but the more creative way of looking at it is that I like to be on a project where there aren’t too many cooks in the kitchen. David Chase created The Sopranos, directed the first episode, and, when we started out, it was myself, a location scout, and David riding around in a van picking the locations. Mildred Pierce was a similar experience: Todd Haynes was the co-writer, director, and executive producer. In terms of the day-to-day, I like projects where it doesn’t take a lot of people to figure it out.

Was that the case with Girls? One of the things that attracted me to Girls is that it’s contemporary. On something like Mildred Pierce, any time you show up on set for the day and the director says, “I changed my mind. I want to look this way instead of that way,” you need to give the production designer oxygen. [Laughs.] There’s so much planning that if you want to make a change you end up moving palm trees around with forklifts. For Girls, we’re in Williamsburg, where there’s so much new development that my joke is that the universe is just building us sets.

Was Lena Dunham a big part of what brought you to Girls? Oh, yes. The show has the same thing as The Sopranos or Mildred Pierce: Somebody with a strong vision and voice. After Mildred Pierce I read a lot of stuff—and a lot of it was really well written—but nothing had an amazing, unique voice. I read the script for Girls and I liked it. Then I saw Tiny Furniture. Sometimes when somebody’s young they do one thing and you think it’s just a fluke. Unlike movies, where you only need one good one, in TV you need a good one every week. So it was clear to me that Lena had a unique voice and that it was consistent.

Have you spent much time working outside New York City? The only corporate job I’ve ever had was as a production executive at DreamWorks, when they first started, where I did the first season of Spin City. The pilot was done in LA, but then they shot the series in New York. No one had ever done a real four-camera sitcom in New York before, so it was kind of a big deal. But the studio always wanted to send someone from LA to shoot. I told them that we had [cinematographer] Dickie Quinlan, but they wanted to know if he’d ever shot a sitcom before. I said, “I don’t know, but he was a gaffer on Raging Bull, so I’m pretty sure he could light the stage for a sitcom.” [Laughs.]

What’s the biggest difference between the LA and NYC production communities? The biggest difference that I saw—though a lot of this has changed —was in going back and forth from television to movies. In New York, the people who are working one-hour pilots, two-hour movies of the week, half-hour sitcoms or Scorsese films are a lot of the same people. Whereas in LA, there wasn’t as much crossover. David [Chase] told me that one of the reasons he hired me for The Sopranos was because I hadn’t been “ruined by television.” I didn’t really know what that meant, because there just wasn’t much TV here at the time. When I did do the pilot of The Sopranos, some of my friends made fun of me, because I was a “movie person.” HBO wasn’t really in the television business at that point. They had The Larry Sanders Show and Oz. And Sex and the City had just started, so they were really just putting movies and sports on TV.

Your entry into television paralleled HBO’s huge boost in New York-based pilots. Yes, and that was mostly accidental. Within a year of my doing the pilot for The Sopranos, everyone who had made fun of me was asking me how to get a job on a television show. [Laughs.] But my run in television is kind of weird. I worked on the pilot of Law & Order, and that’s when I bailed on TV for films. I told medical school I’d defer for a year, and the minute they let me defer I was like, “Okay, I have a year to figure out how to get a job in the movie business.” I probably should have just gotten on a plane and gone to LA, because on-the-job training in New York back then was that you either became a Sidney Lumet person or a Woody Allen person – they were the only people who made movies every year.

What are the biggest changes you’ve seen in New York TV production in the last decade? Once upon a time there was The Sopranos, Sex and the City, and Law & Order. Today I can’t even keep track—there’s like 30-something shows shooting here—so there’s a lot more depth of crew. There’s also a lot of opportunity. You used to be waiting in line for your turn. One of the reasons I probably got the job on The Sopranos was because all the other people who were in front of me in that line had to be working. I think HBO probably looked down the list of who’s in New York and there weren’t that many experienced people left. Now it’s so busy that when you hire people you almost want to ask: “Have you seen a movie? Great! You’re hired!” [Laughs.] It’s definitely a bit of a land and talent grab right now.

With so many projects shooting in New York, is there a hierarchy? Girls shoots in the spring and summer and we do that for a couple of reasons: One is that Jenni Konner, who runs the show with Lena, and Bruce Eric Kaplan, who’s one of our writers, are from LA, and they have kids, so it’s easier to be shooting in the summer. It’s also for practical reasons. This is not a hearty gang who is going to hold up so well in the dead of winter, in the snow. After the first season, HBO wanted us to switch to a fall schedule, and I jumped up and down a little bit to get us on a schedule where we were still shooting in the spring and summer. The best time for us to shoot is when the network shows are dark, as that helps us with locations, equipment, crews, and actors. Even being at Silvercup, we kind of have the place to ourselves.

What’s the best thing about producing a show in New York? It’s nice to be home. It’s nice to be able to showcase the city. We have five boroughs of great backlot. [Girls] gets called out all the time for ruining this place and that place. But a lot of times we haven’t shot in any of those places. It might be other productions, but it’s not actually us; it’s just people laying the blame on us because it’s where the show takes place in people’s minds. I think New York Magazine at some point blamed us for something like “the Girls-ification of Greenpoint.” I think if we’re taking the heat for popularizing some of these places, we should really go and shoot there.

What’s the most unique thing about Girls? It has a good vibe. There are challenges to it, but the most enjoyable part is having great writers on set with us. Even though we’re shooting everything as scripted, we also have the opportunity to have them throw out alternative dialogue. You don’t always have that flexibility when you’re working on a network show, as some are much more formulaic. Also with HBO, we have the freedom to do these standalone-type episodes that feel like little movies – they don’t always advance the plot in terms of connecting to the next episode, but they’re great little slices of life. My job is trying to keep things nice and consistent, but the nice thing about the show is that in all our wild inconsistency—some planned, some not—we are able to jump around and make a little movie, then get back to our regular show. I’m not going to say you get the sense that you’re working on a low-budget film, because we are doing episodic television for HBO. And while we don’t have tons of money, we do have the time to get things done. Oh, and the food’s pretty decent. [Laughs.]