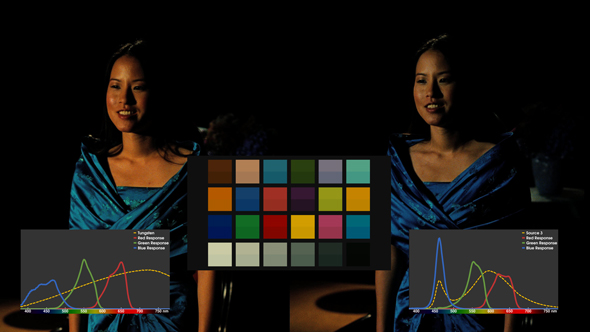 This isn’t just a riddle for cinematographers. It’s a question that’s arisen over the last several years, as DPs have begun to implement what appears to be the likely successor to the tungsten lamp: the light-emitting diode (LED) fixture.

“I had used [LED] lights as touch-up lights — and they’re handy,” he recalls. But Okada cites one example of having lit a set with incandescents, and “just needing to touch up a face in one spot.” He hid a small LED unit behind a chair, to add some glow to an actress’s face when she reached that mark. “The manufacturer claimed the unit to be a ‘tungsten LED source,’” he recounts. “She stopped right in the doorway, where I had this LED, and looked fine. But when I got the dailies back, her face was totally cyan.”

What’s worse, Okada says the image could not be repaired in post, because there wasn’t enough of the right color of light in the scanned negative for a color timer to bring out.

When Okada queried the manufacturer about the LED fixture, he was told it was rated at 3200 K, the color temperature on the kelvin scale of measurement which true tungsten lights have, and, indeed, when Okada measured it himself, it was 3200 K.

“That’s when I knew we had to look into this,” he says. “I didn’t want it to happen to anyone else.”

Such experiences are not isolated. Many DPs are finding what looks right to the eye may not be right on the screen, given how LED lighting fixtures react with film emulsions and HD camera sensors designed for true tungsten or daylight sources.

That’s what the Sci Tech Council’s Solid State Lighting Subcommittee has been trying to find out. Committee Chairman Jonathan Erland and his team have spent the last two years studying the effectiveness of lighting instruments that are intended to replace tungsten fixtures in motion picture production by the year 2014. That’s the same year that the Energy Independence and Security Act of 2007 requires household light bulbs in the range of 40 to 150 watts meet certain energy requirements, which tungsten lamps do not.

Erland says he’s sure the energy act will, at least for now, exempt studio tungsten stage lights, which are far brighter than 150 watts.

“But as soon as you’ve taken something as ubiquitous as the tungsten light bulb out of the market,” he notes, “it becomes increasingly expensive.” Or perhaps even non-existent; experts suggest that few manufacturers will be making tungsten lamps by 2014.

Even if tungsten units are still available — and affordable — there are other issues.

“On any set, besides the various studio lights, we will also have any number of practical lights,” Erland explains. Those lights will, by 2014, no longer be tungsten, but some other source. And, as Erland and his team have discovered, mixing and matching various types of lamps that intend to portray tungsten within one shot makes for something he calls “chromatic chaos.”

Problems with color instability and confusion arise from the core technology in LED fixtures, which first appeared as red or green indicators in calculators in the 1960s and ’70s, followed by the blue LED, invented in the 1980s, as the actual light source. The technology involves a tiny emitter on a circuit board, capped with a layer of phosphors that react to the 450-nanometer wavelength of blue light from the emitter, themselves producing an orange light.

“If you combine the blue and the orange, to the human eye, it looks essentially white,” Erland explains. “That’s your basic white LED today.”

However, as anyone who’s ever out at night with an LED flashlight knows, that so-called “white” light is, well, weird; something is missing.

And finding what’s “missing” from LED fixtures has been one of the goals of AMPAS’s Solid State Lighting Subcommittee. They say the problem can be explained by looking at the spectral power distribution graphs of the lights, which depict how much of each wavelength of light a lamp emits. A true tungsten lamp produces a smooth line, rising from less blue, on the left end of the scale, to a lot of red and yellow on the right.  Daylight is also nearly smooth — or, in light language, “continuous” — without any bumps or peaks.

White LEDs, while trying to approximate white light, have peaks and valleys — a large peak in the blue range (thus the bluish tint) and a big dip in the adjacent cyan range.  The latter became visible in an AMPAS test, in which a model, Charlotte Chen, was photographed wearing a dress that had a number of different blue tints. Footage was shot with both a true tungsten source and an LED source. The tungsten-lit footage displayed all of the subtle differences in blue tones in the fabric, while the LED-lit footage showed just a nice blue dress.

“If the light never had enough cyan, then the camera couldn’t record it,” Erland says. “The data simply never was there.”

Multi-emitter fixtures — so-called “RGB” lights — contain additional colored LED lights in an attempt to come closer to approximating the quality of light emitted by tungsten, but they still fall short due to the addition of peaks to the curve at the frequencies of those additional lights.

The smoothness of the line of the true tungsten light is representative of light being emitted by a “black body” source at 3200 K. Another index, the Color Rendering Index (CRI), can reveal how close any light purporting to be like tungsten actually gets to hitting its mark.

“One hundred CRI means a light is emitting the same as a 3200 K point on a black body,” Erland explains. “That’s as good as it gets. Anything else is relative to that 100 CRI.”

Though a scale like the CRI can help tell a cinematographer how close a manufacturer has gotten their light to true 3200 K in terms of color temperature, there is currently no standard to indicate how close the light is to the 3200 K output of a real tungsten lamp.

“CRI is not aimed at photographic capture of the light, but rather the way it appears to the eye,” Erland continues. “The manufacturer might show you they can make a nice picture and say, ‘But we spent a lot of time developing this, and we think we’ve delivered a perfectly wonderful look,’ but it’s still not quite there.”

The Council is trying to create a new set of indices, the Studio Tungsten Simulating (STSI) Index among them. Erland says STSI will tell you how close a light designed as 3200 K is to that true tungsten curve.

“You can say ‘By this index, this light is 98 or 48,’” he adds. Then the cinematographer can decide if he needs to do the film test a less than perfect score would demand. That’s one of the goals of this study.” The golden rule is, of course: always test!

While some manufacturers jumped into the LED market to take advantage of the lights’ energy efficiency and other positive qualities, they did so without first making certain the products could deliver on the “just like tungsten” promise.

Others took a more balanced approach.

Litepanels®, founded in 2000, had a product ready to go into production in 2002, but co-founder Kevin Baxter says the company still couldn’t find a manufacturer who could produce LEDs of sufficient color quality for several more years.

“You really had one choice and one choice only, and if you didn’t like it, well, you went home,” Baxter recalls. The focus from many manufacturers, he says, was on voltage and brightness, not on color. “The manufacturers’ products were simply too unstable for our industry. We had something ready to go, and we just said, ‘We can’t sell this.’”

A few years later, Baxter was able to find mid-level manufacturers to develop LEDs that would hopefully meet the specifications of cinematographers.

“I told them, ‘I’ll give you a purchase order, and I’ll go to your factory, and we’ll re-work the phosphors,” adds Baxter. “But if you don’t make the spec, I don’t pay you.’ That’s how Litepanels really became a commercially viable company.”

Film lighting icon Mole-Richardson had a similar experience to Baxter’s journey with Litepanels. Mole-Richardson president Michael Parker says his firm waited 15 years until “we felt the core technology was mature enough for us to grab onto.”

In development of its MoleLED® light, the Hollywood company chose the best quality of blue LED from its supplier through a process known as “binning,” which separates lower quality LEDs from those used in professional applications.

Mole then worked with supplier Osram to develop its Remote Phosphor Technology, a combination of 27 different phosphors with a light output closer to tungsten than regular mass-produced white LEDs. Osram then designed for Mole a silicone dome cap containing the phosphors, which Parker says helps emit the light more evenly from the LED.

The company also worked with Shelly Johnson, ASC, to test the formulations.  Among other things, Johnson notes, “At one point, they had the light looking absolutely beautiful on film, but it had a pink appearance to the eye that did not photograph,” and made blending lights on set difficult. Mole and Osram were able to eliminate the issue.

Still other manufacturers are going the route of “tunable” multi-emitter systems. ARRI introduced such a light 18 months ago (available in a tunable configuration or fixed to replicate either tungsten or daylight). This year at NAB, ARRI unveiled its new L-Series “True LED Fresnel” series, which are among the first units to market to provide a controllable spotlight source that emulates traditional stage lighting techniques for the film and television industry.

“We pick the LEDs and create algorithms for the driver to give the best color we can from those LEDs,” describes John Gersh, ARRI’s Vice President of Lighting Products.

ARRI president Glenn Kennel says the company is also building cameras to work as a system alongside its lights to best capture tungsten-like light.

“Our approach is to make sure our cameras have a broad spectral response, to make them less susceptible to problems from narrow band light sources, like LEDs,” Kennel states.

British newcomer Gekko has also developed a multi-emitter product, having spent five years in development to make certain it has a light that rivals tungsten.

“It produces a broader spectrum than we can with just white LEDs,” company founder David Amphlett says. “That’s needed to reflect all of the colors on the set — fleshtones, garments, etc. We need a broader, and, more importantly, a more controllable spectrum.”

Gary Einhaus, CTO for Kodak Entertainment Imaging, says there has been a clear evolution in the design of LED lighting units.

“The improvements we’ve seen in the designs, from early to current, suggests they’re moving in the right direction,” Einhaus remarks.

And the man at the heart of the matter, Erland, notes that the Sci Tech Council’s goal “is to encourage the development of lights that simulate tungsten. Many of us believe that the results of this work will actually be beneficial across the board,” he concludes. “It’s essential to do this for photography, but I think most people would find that tungsten-simulating light that might have been developed for photography will also be more comfortable for them in their home.”

The Academy will, of course, continue to study LED and other types of sources as they appear on the market.