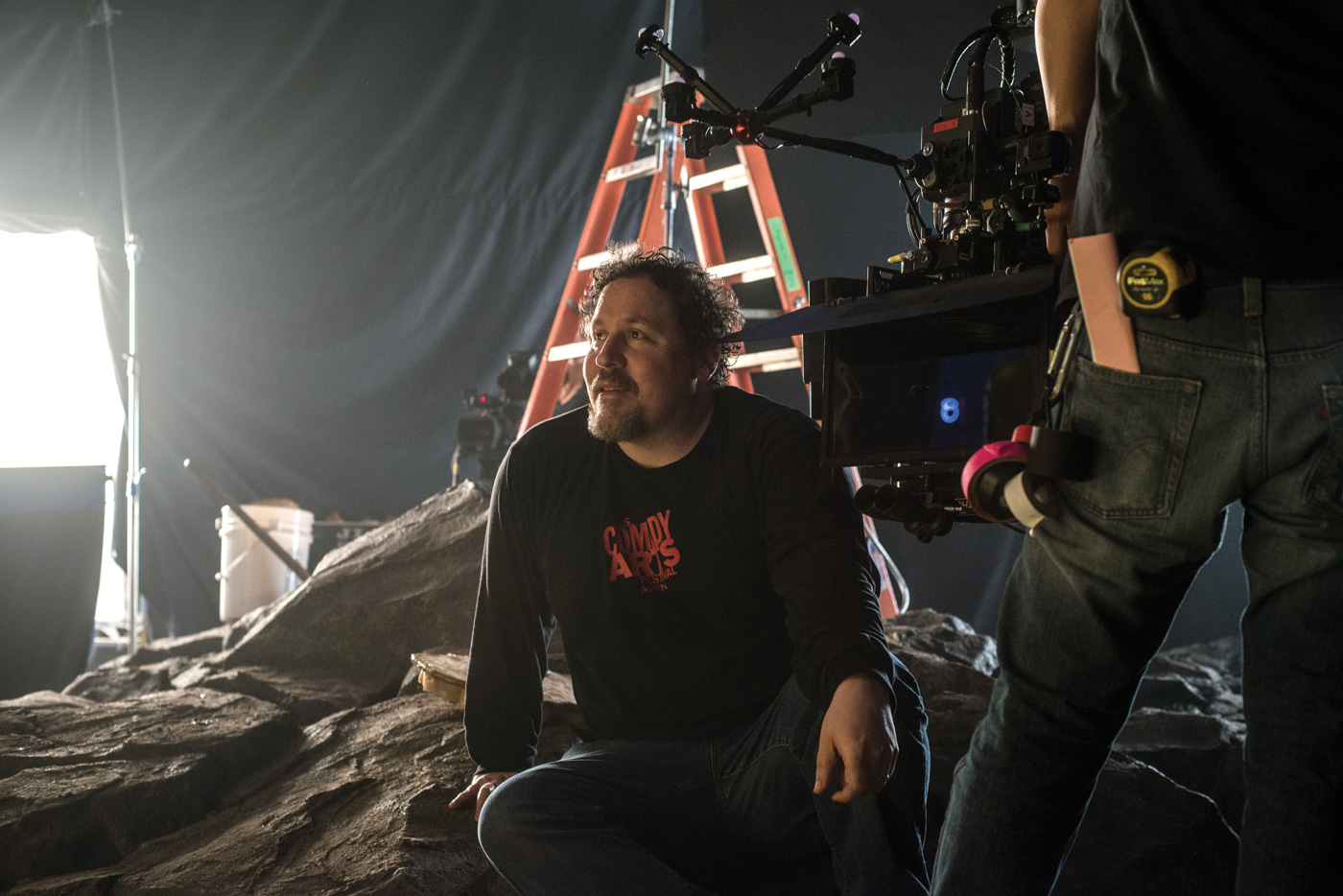 Actor/Director Jon Favreau loves movie magic, and he loves creating it. Whether it’s flying Robert Downey, Jr. around in his high-tech suit of iron in 2008’s Marvel blockbuster, Iron Man, and its 2010 sequel, or pitting Old West cowboys against visitors from outer space in Cowboys & Aliens (2011), or even using old-school “forced perspective” to make audiences think full-sized Will Farrell ought to be able to live comfortably amongst Santa’s helpers in 2003’s Elf, Favreau has cleverly put VFX in the service of an entertaining story.

But with the release this month of Disney’s The Jungle Book, a new spin on the studio’s 1967 animated film and Rudyard Kipling’s beloved wild-boy tale, Favreau has gone beyond any of his previous efforts. He employed motion-capture technology Visual Effects Supervisor Rob Legato had first developed for James Cameron’s Avatar, with some new adjustments. ICG freelancer Matt Hurwitz talked with Favreau about the effective use of VFX in storytelling, and how he found such valuable cinematographic partners to grab a nearby vine in the project’s complex technological jungle.

How did you decide on motion-capture technology for The Jungle Book? Jon Favreau: I was already kicking the tires on virtual sets and thinking about Disney, because I was developing something called Magic Kingdom, about the park coming to life. I like to shoot in Los Angeles, and I knew that we’d have to shoot in Disneyland a lot. But I had to figure out how to keep costs down and become efficient.

Any references or inspiration besides the obvious one with Avatar? Gravity was very inspiring to me, because they found a way, in this era of CGI backlash, to integrate computer-generated effects that were invisible. A lot of that had to do with the planning and the cinematography. The choices a director, and, more importantly, the cinematographer commit to in preproduction are going to inform whether the effects look troweled on or organic and invisible. Once we had the commitment of the studio on Jungle Book to explore the Avatar approach of actually creating a photo-real environment, where we can exaggerate and stylize things, subtly, while still maintaining the photo-real quality, we knew that was the direction we wanted to go, because it allows people to feel that they’re in a real environment.

What is it about visual effects that you find engaging? Part of me just loves movie magic, whether it’s stop motion or miniatures or forced perspective. I’ve always loved reading Starlog magazine. To me, there’s a tradition of the magician, the stage performer that filmmakers use, which is just another opportunity to create illusions and to fool an audience and get a reaction out of them. When you watch a guy like [magician] Ricky Jay, he’s doing something very technical. The real artistry isn’t just the dexterity and the practice of the technical aspect, but it’s weaving a story. So they engage you completely, in a very human way, as they’re doing something very technically sophisticated.

What did you learn in your research for The Jungle Book about Walt Disney’s approach to animated characters? Walt did that very thing – pairing emotional stories, and usually old stories and myths, with technical wizardry, which, to me, is a magical combo. I studied “Walt’s Story Meetings” on the Bambi DVD, and I saw how he was wrestling with the technical limitations of animation, and how to make the animals talk in a convincing way. He took a huge step up from Snow White, which was just a few years earlier, to make [Bambi] feel photo-real, not cartoony, bringing in animals as references for the animators to watch and draw, to understand their behavior. We did the same thing with Jungle Book; although, of course, now there’s the Internet, where we can pull clips from references of real animals’ behavior. We wanted the animals to behave and emote in ways that were specific to their species, and not what a human would do.

So Walt Disney had a tangible influence on this new version? You could say that, because he was always pushing the boundaries of the art of his craft, whether it was the development of the multiplane camera, which was incredibly high tech, or having teams of animators who did specific things. You hear him make reference to, “Oh, they’re doing a snow effect in the other movie,” which was Fantasia, which he was making at the same time. “Let’s see if we can use that here.” It was an effects house, even though it was done by hand, and not by computers. They were trying to figure out how to make fire and water look real.

What qualities are key for a director of photography working on this type of complex technological project? There aren’t a lot of directors of photography who are comfortable with this kind of stuff. They’re used to being the first ones taking the beach. And sometimes, the DP has to put his vision in service of the overall vision of the piece, as was the case here. Normally, you walk onto a set with a DP, or you look at a location, – something that’s real in the world – and find visual opportunities. The DP establishes a look, lights that set or location, and comes up with a visual scheme of how lenses will work and the story unfolds. Here, we’re literally creating all those things. So the DP is giving notes on drawings, on light studies that are done in a computer. We’re scouting, but with video game controllers. So it takes somebody who’s game to open him- or herself up to that kind of workflow.

And Bill Pope worked in that mode? Bill was great, because he really embraces new technology, which is one of the reasons that I hired him. Even things he hadn’t done before or didn’t fully understand in the beginning, he made sure he learned. And there’s an energy when people are seeing new technologies as creative opportunities and wonder, “How do you do something that doesn’t undermine the tradition of what came before, but build upon it instead?” That was exciting.

What were the advantages of using the Virtual Camera system? It allowed us to essentially pre-shoot the movie. Bill was able to make his choices about every shot – those that were completely animated, as well as those that were shot in camera with our young actor – before we ever set foot on stage. He already had his lighting scheme set and his camera moves decided.

So the work done on-set was… Essentially an element shoot – it was just the shots, sometimes just pieces of scenes, for which we needed to have close-ups or more intimate shots of Mowgli, often interacting with other characters who would be animated later.  Because Bill had already essentially shot those scenes in the virtual world, we not only knew how to recreate what he’d established in the virtual version of the film, we knew what the vision would be. You’re not shooting elements before you know what that vision is, which can sometimes force you to inherit choices that might not work well in the virtual world later.

How would the process work? We would get multiple scenes done each day, and move through it very quickly, because we were working with a child actor. And after everybody went home, Bill [Pope], me, [VFX Supervisor] Rob Legato and our technical staff would review a shot we had just gotten on set, and if we decided it didn’t quite have the feel we wanted, we would then go into the smaller Camera Capture volume we had there at L.A. Center, which we called the “shark cage,” and try another approach.

It got kind of complicated later on when we were getting into scheduling issues, so we’d sometimes trade off. If there were scenes that didn’t require Bill, he’d be off in the shark cage doing camera, and I’d be on the stage with Rob doing capture. It was a very free-flowing creative space, where you could make choices and decisions on the spot, instead of having to come back and do pickups months later. One great aspect is that because we had a digital editing suite right behind the curtain on the set, we could cut takes in as we were filming – something we borrowed from Gravity. You have the film already in the Avid – what we’d built so far – and as you shoot each angle of coverage, you cut it in the movie, right then and there, and know whether or not you’re okay to move on.

How do you see emerging technologies being accepted by audiences and film crews? It’s funny, you hear of the days when people would watch a train come at them in the theater in the silent days, and they’d jump out of their seats. Or when people saw Willis O’Brien’s 1925 The Lost World, the original stop-motion version, they thought they were real dinosaurs. Now they both look comically simplistic. I think whenever new technologies emerge, it’s kind of magical, and there’s a period of time where people are fooled by it. We get to experience a story in a much more visceral way, because we’re completely transported by what the technology does. But technology without artistry or storytelling is worthless.

So new technology can be a mixed blessing? I would argue that when they arrive, they set cinema back at each stage. Look at how much the image suffered when color first came in, compared to the state-of-the-art black and white. When sound came, the moving camera took a back seat to the big “refrigerator” enclosures that were required to baffle the sound. A few people do it right in the beginning, and a lot of people do it wrong. All the dust has to settle. I think you’re finally seeing CG being used well.

What do you think is the best approach for a director when using visual effects as a storytelling tool? I think the best thing you could say about a visual effect is that you don’t see it. I think that when it’s done right, you think you’re looking at something real, which was my goal with this film. I remember when I saw Gravity, my son asked me, when he saw a particular shot, “How’d they do that, Dad?” And I said, “I don’t know.” That’s the highest compliment you can give to a visual-effects artist or a magician. You really think you saw somebody levitate. And when you can do that, when you pass the touring test, when you think you’re looking at something real – even though you’re buying a ticket and you know it’s fake – when you believe in your guts it’s real, that opens up a world of opportunity.