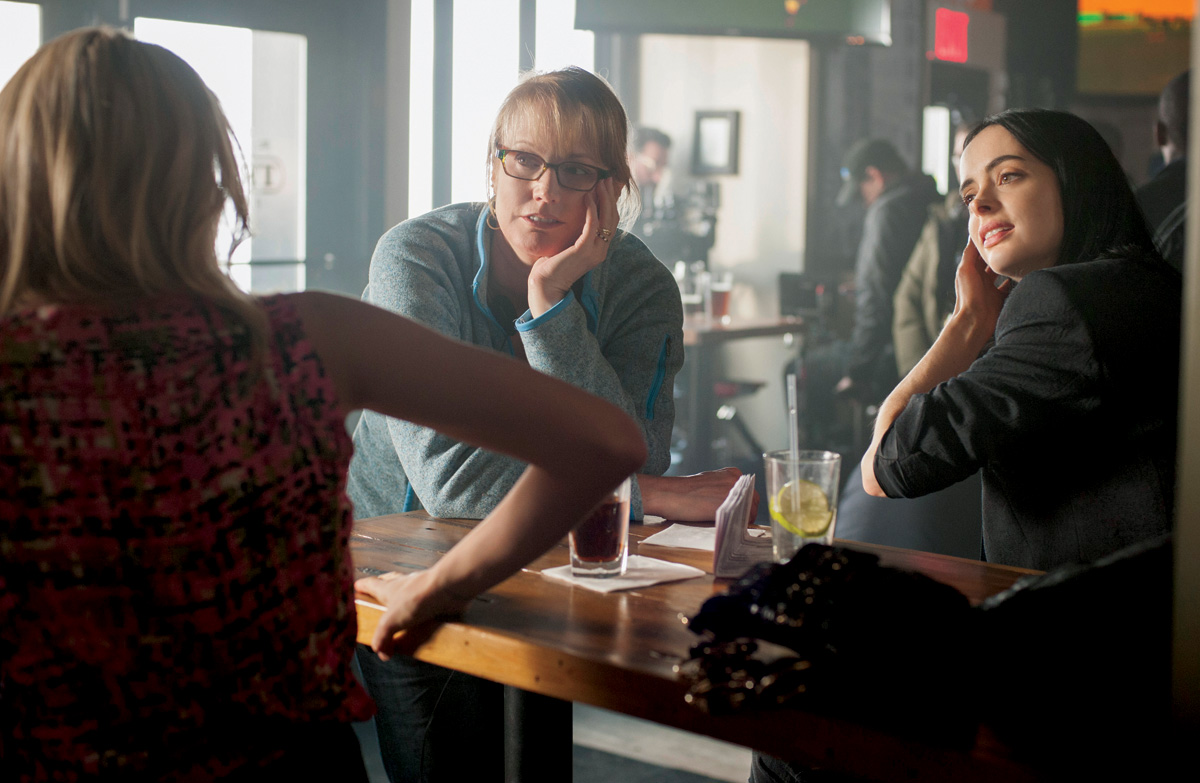 Superheroes are so much in vogue in Hollywood, one is even apt to find them behind the cameras. Case in point is Melissa Rosenberg, creator of the new Netflix streaming series Jessica Jones and friend to writers – and women – around this industry.

Over the course of her 20-plus-year career, Rosenberg has been on the WGA’s Board of Directors and was a strike captain during the 2007-2008 WGA strike. She’s supported female screenwriters through the WGA’s Diversity Committee and co-founded the League of Hollywood Women Writers. No shock, then, that when her dual roles as head writer and executive producer on Dexter (and screenwriter on all five Twilight movies) finished, Rosenberg set up her own producing shingle (Tall Girls Productions), dedicated to creating muscular, complex roles for women.

And when Marvel came along with Jessica Jones, featuring a hard-drinking female superhero-turned-private-eye with a dark comedic sideline in psychological trauma, Rosenberg (follow her on Twitter @TallGirlMel) said, “Hell, yes.” ICG freelancer Sophia Stuart talked with this feminist multi-hyphenate about embodying a new kind of superhero, on and off the screen, for the digital generation.

How did Jessica Jones come about? Several years ago I was looking around for my next project. I met with ABC Studios and they asked me what I wanted to do, and I said, “I want to write a female superhero.” They then put me together with Jeph Loeb, Head of TV at Marvel. (Marvel, like ABC, is also under the Disney umbrella.) Jeph has been so instrumental in bringing Jessica Jones to the screen. He’s very much my partner and guide into the Marvel Universe. Jeph sent me Alias, the original comic, created by Brian Michael Bendis and illustrated by Michael Gaydos. I was blown away by the writing, by the character of Jessica Jones. I just knew this was the project I’d been waiting for.

But ABC decided it was too mature, so you took it to Netflix. That was all Jeph’s doing. He just called one day to say, “Guess what? We’re at Netflix.” Which is exactly where it belongs. I wanted to, and was able to, push the material into some very dark places that Netflix embraces and promotes. Cindy Holland (VP, Original Content, Netflix) and her team got it instantly. They saw where I wanted to go. I said, “I want to push this character to the edge.” They’ve supported me in that vision.

Are there any parallels between Jessica Jones and the Twilight movies? They both come from source material that has enormously passionate and devoted, and highly vocal, fan bases. Marvel comic book readers and Twilight fans alike feel an ownership of the material, so there’s a level of responsibility, for me, as a writer, because I really want to deliver for these audiences.

Did you see a through-line in terms of the material? Not so much. Twilight was about love and romance. Bella is a young woman, starting out in life. Jessica Jones is a character portrait of a damaged and complex woman. She’s lived through a lot already, is recovering from that experience, and is, in a way, on a road to personal redemption.

You’ve done some gender-blind casting with Moss and the role of Hogarth, the attorney who sends Jessica out on cases as a private investigator. Actually, we’d already created, written and cast that character but realized we were missing an opportunity to pull from the MCU. So we renamed her Hogarth after the original comic book character. It’s a really complex role and a big departure from anything Carrie-Anne Moss has done before. She’s such a courageous actor and loved that Hogarth is so bold and morally ambiguous. She completely embraced it.

The look of Jessica Jones is truly dark and psychologically jarring. What were some of the key visual influences? The movie Chinatown, definitely. Modern noir. Especially in the way Polanski would hold on a beautiful, cinematic frame and let the actors walk in and out of it. The pacing and naturalism. And also his use of shadow and light.

How did you know Manuel Billeter was the right cinematographer for this material? We met with several DPs, people with longer résumés, who had done lots of pilots before. But when Tim Iacofono (our producer) and I sat with Manuel and looked at his work and some of the imagery he’d come up with for the show, we were struck by his lighting, his eye for beautiful imagery. It was clear he was an artist. He has a wonderful sense of style, both in his person and in his work. I wanted this show to be beautiful – not bleak. The subject matter itself can be bleak, and I didn’t want to pile on with bleak visuals as well. Manuel found that balance. As a showrunner, you hope to surround yourself with artists who are as passionate about their work and the show as you are. That’s Manuel.

Didn’t you work with director S.J. Clarkson on Dexter? She directed regularly on the series and was a favorite, though she never directed any of the episodes I wrote, much to my dismay. I was envious of my fellow writers who got to work with her on their scripts. But my colleague in the writers’ room, both on Dexter and on Jessica Jones, co-executive producer Scott Reynolds, worked with her many times, and he really influenced my decision. Working on the pilot and second episode with her was a true partnership. S.J. has a very strong point of view and brings that to every moment. She found a way to bring the audience into Jessica’s inner psychological turmoil, to experience Jessica’s point of view. S.J. is an exceptional storyteller and visual stylist. She’s the whole package.

Kickass female leads coupled with female directors: Is TV braver than Hollywood right now? If by “Hollywood” you mean feature films, then yes, TV is telling amazingly bold and original stories right now. It’s also the place where interesting complex female roles have made some advancement. Look at Jenji Kohan’s Weeds, then Orange Is the New Black. Look at Nurse Jackie or Scandal – those shows have helped audiences begin to accept and embrace more expansive female roles. I’m not sure Jessica Jones would have gotten made without those shows having opened some doors.

As a woman in this business you must be extremely focused and strong. Would you label yourself a feminist? Absolutely! An unapologetic, loud and proud feminist.

And you have seen TV change so much over the course of your career. I think storytelling is storytelling is storytelling. And character is character is character. The basics of building a story have been around thousands of years. As a writer you evolve and get better at it, but the basic premise is the same. However, what has changed so much about TV is the outlets. When I started on Party of Five, we wrote four acts around breaks of three minutes for commercials. Then it became six acts and more commercials. That affected the storytelling because you spend a lot of the time reminding the audience what happened before the commercial break.

And then what happened in last week’s episode. Right! A lot of real estate gets eaten up in the recaps.

Is streaming a completely different approach? Essentially it becomes a 13-hour movie. Many people are watching episodes back to back to back. It’s one long immersive experience. Netflix was very good at guiding us through this seismic shift in viewing habits. It influences the writing: in terms of how far you can go with the story, you can really just keep diving in and going deeper, taking the audience with you. It’s a whole new ballgame.

How would you contrast the writer’s role in features versus television? Writers are certainly more respected in television. We’re the creators and the keepers of the through-line, the auteurs if you will. In the feature-film world, writers are considered fungible. It’s quite amazing I was the only writer on all five Twilight movies. Usually studios are hiring the next writer to replace you while you’re still on the job. They cycle through these lists of writers. The cheap ones to do the heavy lifting, bringing in the high-profile sexy names to satisfy the studio. There seems to be this attitude that writers have one specialty – let’s bring her on for the character work, him for the action, her for comedy, him for structure. But in TV we do it all. In film, you get these committees of writers, which waters down the vision, the voice, and I think that’s how bland storytelling happens.

So how essential is the showrunner to a TV series? A showrunner has a singular point of view, a strong voice. There’s one person at the helm, leading the writers, directors, cast and crew, interfacing with the studio and network, et cetera. You’re in it from the blank white board in the writers’ room to the final sound mix. It’s a massive job – and extremely collaborative. So your team is essential. I’m very Type A, so my hands are over everything – every aspect of production. The first trick to being a good showrunner is to hire great people who do what they do really well.

You’ve been a champion for writers and for women in this industry. Why? The two issues that I’m most passionate about are equality for women and the status of writers. Being both, I have very personal experience with being treated as “less than” – a second-class citizen – and it pisses me the hell off. But I can do something about it, we all can. It’s hard, exhausting, at times demoralizing, and it takes tenacity. But we can do it. I learned that when I had the great good fortune to be on the Board of Directors for the WGA many years ago. I saw first-hand how powerful and strong we could be together. I felt that even more strongly as a strike captain walking a picket line with my friends and colleagues. I’m working in streaming media right now, so I know how important it was that we got our “nose under the tent,” as they say, with streaming. Management didn’t want to give us anything in streaming – zero, zilch – but we fought for it, at a great cost to be certain, but we fought and won. However, we have a very long way to go before that contract is equal to our other hard won contract in network. But I’m hopeful because our Guild is chock full of champions.