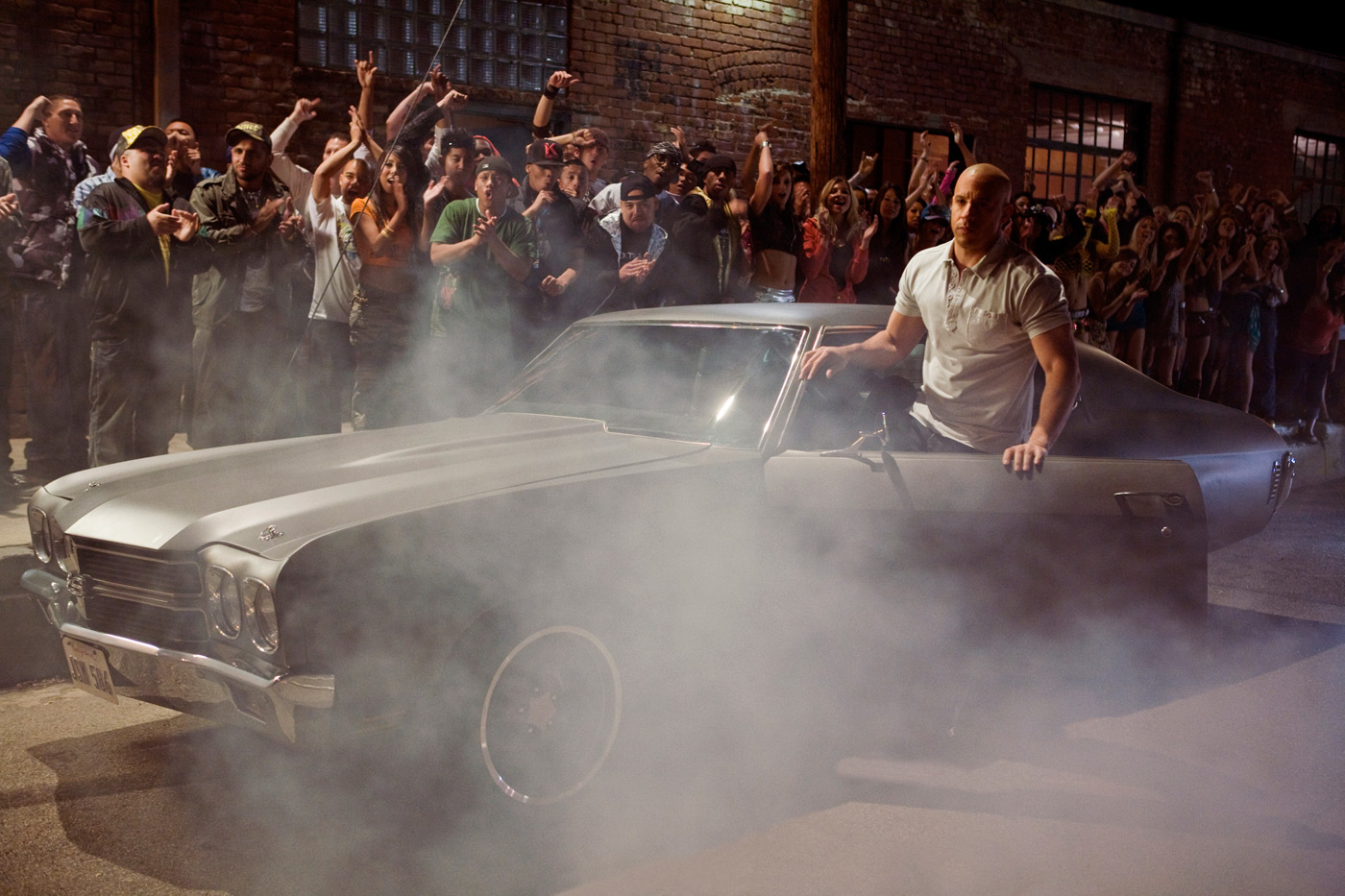 “Despite all the technology that’s available to us,” Fast & Furious director Justin Lin observes, “I think the people who respect cars and love chase scenes still want you to do it for real and not rely on CGI. It’s why the car scenes in movies like Ronin and Bullitt stand up. If [audiences] get even a subconscious twinge that a shot is CGI the sense of danger goes out the window. Our goal, in the context of this franchise, was to use the old-school techniques to design stunts that give the audience a sense that they’re seeing something real. We didn’t want a lot of shots where a camera seems to be flying through an engine because once the audience feels that they’ve seen something that would be impossible, we lose that all-important sense of danger.”

Lin, who came to prominence in the indie world with his youthful action feature Better Luck Tomorrow, helmed The Fast and the Furious: Tokyo Drift. He says that for this latest installment, which reteams actors Vin Diesel and Paul Walker in the roles that helped launch their careers, he landed a top shelf DP, Amir Mokri, whose resume includes artful indies like The Joy Luck Club and Eat a Bowl of Tea as well as high-end action pictures like National Treasure: Book of Secrets. Mokri [who was on a distant location until after this issue went to print] agreed with Lin’s notion that the bulk of F& F’s effects should be achieved practically, not in post. And even where extensive lighting setups were required, the vehicular chaos should be designed to enhance, not “improve” upon, the sense of realism.

“When you talk about night races or night chases,” Lin continues, “they can easily be lit with very large units that end up with a flat feel. Amir did an amazing job working within the tone we’d set for this film. We were blocking off six to eight city blocks at a time and we’d have to ‘own’ every building. He would recreate the look the location would have as if you were really there, which would be about the light coming from streetlights and buildings. To make something look [unlit] on film can require a great deal of lighting and Amir was just tremendous at that.”

It’s All About The Zoom, Zoom

The money shots in Fast & Furious are, naturally, all about power and speed. The cars are tricked out [see sidebar] and operated by some of the best stunt drivers in the industry. The multiple chases and race sequences combined footage of actors, either driving under relatively safe conditions or inside a cutout car shell in front of a greenscreen (required to safeguard the lives of marquee talent), with both first and second units under the direction of veteran stunt coordinator and second unit director Terry Leonard. However, the planning for these elaborate sequences began on a computer screen where pre-visualization supervisor Alex Vegh of Hollywood-based Proof, used 3D animation tools, primarily AutoDesk Maya, to mock up shots in 3D space.

Vegh programmed information about particular set pieces, cars, cameras and mounts, and what kind of shots they can attain, how much space is required and how long it would take to achieve a particular move, to avoid time wasting trial-and-error on the day of production. “There’s a scene that’s in the movie’s trailer,” Vegh points out, “where we see gasoline tankers flying off a Mack truck towards Dom [Vin Diesel], and the filmmakers were able to use the previz to work out what could be shot practically, how particular locations could be used, and also what elements they needed for compositing. Films are using pre-visualization to figure out big action sequences like these, and we’re also doing more work using 3D animation to help directors pitch ideas to studios.”

Leonard makes clear that he frequently consulted with Lin to ensure that the material he brought in matched the style established by those first unit principals. “I’m not hired to set the style. I follow the style,” Leonard insists. “That can be hard for some second unit directors because they think it should be shot their way and all of a sudden footage comes in not matching what first unit wants and they get themselves in trouble.”

Leonard brought his love of cars, and a long history of capturing power and speed on film, to Fast & Furious. He started out as a go-to guy for stunt sequences involving horses when Westerns were more in demand. But, he maintains, many of the same principles translate to car stunts. “The more you can get things happening in the shot, the better,” notes Leonard. Recalling his work in the 1970s on the third installment in The Man Called Horse series, he explains that for any of the riding scenes the actor – lead Richard Harris or, more often, a stunt rider – would be wearing a buckskin fringe. “That fringe would just come alive and enhance the sense of movement,” he continues. “It’s the same with automobiles. If you’ve got little things you can put on a car, like presidential flags on a limousine, it adds to the effect. You don’t want the cars flying through dust constantly but if they hit a dust puddle that goes whoosh and it all flies through the air, using some WD40 or bleach to make smoke from the tires enhances the effect.”

Leonard rarely relies on more than a slight amount of over- or under-cranking to achieve speed in a shot because he says it’s usually a dead give-away that trickery was involved. His own personal tastes matched perfectly with Lin’s and Mokri’s plan for car chase realism. Leonard might have a camera going as slow as 21 fps if there aren’t any tell-tale signs of a speeded-up shot anywhere in the frame and he’ll go to 48 fps for rather subtle slo-mo. “Especially for jumps,” he adds. “You take the automobile super fast, maybe 80 mph, and then slow it down at 48 fps and there’s so much happening with that car. There’s the articulation of the chassis, and maybe you deflate the tires a little bit so they start to roll under the rim. Now you see the detail the speed will give you. I’ll put two bolts on a wheel so it flies off or I’ll make a fender or a door come off. I’m a big fan of blowing hoods off with air cannons.”

Obviously, lens choice and camera placement impact the perception of speed. “If you’re in the air with a long lens watching a car go 200 mph down the front straightaway at Daytona,” says Leonard, “it doesn’t look like they’re going very fast. But if you look at those same cars [going at the same speed] from a wall level with the side windows, it’ll make you say, ‘Oh my God!’” The sense of speed can also be enhanced based on what’s between the car and the camera. “Old horses that aren’t running very fast can look like they’re going 95 mph because you’re looking at the horse in concert with what’s going on around it,” Leonard remarks. “The same applies to cars. If you’ve got some front piece flying by, it makes everything look faster.”

One of the key chase scenes in Fast & Furious is set in a tunnel connecting Mexico and the U.S. The production scouted for, but ruled out, the option of a real location, and instead built its own tunnel in three sections inside a San Pedro warehouse. The massive set allowed Mokri to fly out side walls and permitted camera cars, and a variety of cranes and mounts, to drive alongside the vehicles. “I wanted to make sure,” Lin notes, “that the audience never got the feeling that we were moving a wall. We might have had a picture vehicle outside the boundary of where the tunnel wall would be but the camera itself always remained inside the tunnel. In many cases, we’d remove a wall so we could move the Russian Arm next to the cars. But I don’t think anyone will feel that there’s a cheat because Amir and his team were careful to make sure the camera itself was inside where the tunnel would be. The visual effects people would say to us, ‘Shoot it in a parking lot and we’ll build the tunnel around it in post.’ But Amir was concerned about all the reflections in the car, so we decided that wouldn’t be the right approach.”

Some say Local 600 DP Gary Thieltges created his Doggicam rig as a “poor man’s Steadicam.” But the remote heads now made by Thieltges’ Oscar-winning firm have proved invaluable to car-heavy stunt shows like Fast & Furious. Doggicam operator Frank Buono had worked with Mokri a number of times before. The cinematographer brought Buono in to use Doggicam’s Sparrow Head in conjunction with crane arms, that company’s Power Slide or Super Slide (which can move at a head-snapping 30 feet per second). “Amir knew the components Doggicam offers and saw how they could help to cover a lot of the car stunts,” Buono observes. “You can’t have a grip pushing a dolly alongside a car that’s being propelled at 30 mph.”

The Sparrow Head, Buono elaborates, “is a small, remote head that works on its own or in tandem with the crane arms. It weighs about 35 pounds including a small camera and 400-foot mag. We could hang it off wires and attach it to boats or cars. We’ve attached it to stuntmen who have swung through sets and we can operate it from up to half a mile away, so long as my controller has a direct sightline to the unit. It gives us an opportunity to put a camera in places where an operator would never be able to go because of size or safety factors.”

For Lin, a lot of the choices on Fast & Furious had more to do with what not to use. “Coming from the indie world,” he says, “I was so blown away by some of the toys. The Russian Arm can do amazing things that look super cool but sometimes I wouldn’t use it because it would just do this perfect revolution around a character that was just too precise and perfect and didn’t mesh with our goals. Amir and I always tried to be very specific and explore points of view with the shots that would make the car chases work.”