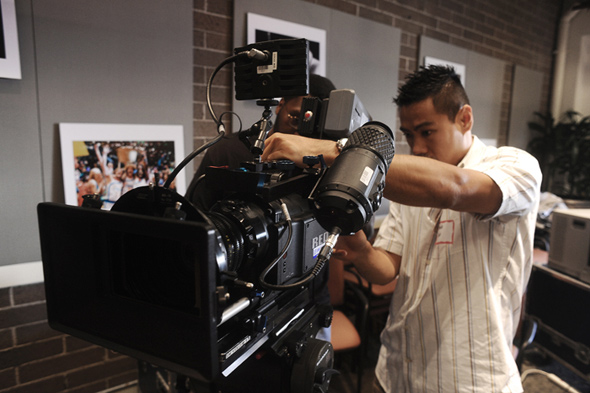 The Red camera has been the subject of a great deal of discussion since before the company unveiled its first prototype two years ago and shipped the initial run just over a year ago. There are now quite a few rental houses and individuals with real-world experience using the camera, some of whom shared their thoughts with attendees at a recent Red One training seminar at the Guild’s Sunset Boulevard headquarters. Members who showed up for the all-day Sunday event also got to spend considerable hands-on time with the Red One, learning the camera’s unique characteristics first-hand.

Local 600 President Steven Poster explains why such hands-on educational affairs are important to the Guild. “We need to train our members on all kinds of systems weather they are mainstream or not,” he says. “The Red is seemingly a simple solution to making movies. In some respects that is true. But if you take the whole system including the capturing and conversion of the data it can become a very complicated process especially if you are trying to work at the highest resolution.”

“By seeing new equipment and hearing from people who’ve deployed Red gear in the field,” Poster adds, “Guild members in all classifications can get beyond the hype and see the true pros and cons of new imaging systems like Red. “Knowledge is power,” he says, “and it is very important to keep Local 600 members up on all the rapidly-evolving technologies. As the tools of the time-honored positions of AC and loader change, it’s important to make sure these functions do not become non-union jobs.”

Poster also noted that as cinematography continues to involve file-based recording to disc, as opposed to the film methods so many DPs made use of for their entire careers, traditional classifications like “loader” will surely change. But rather than disappear, Poster points out, the essence of the job will simply evolve. The tools and mechanics may shift but someone will still have to deal with hard drives or flash drives and file transfers, and everything else required to ensure the image data is recorded to whatever media is being used and that it gets where it needs to go for the next phase of production.

Local 600 member Cliff Hsui of SIM Video, a rental house sending out Red cameras into the field, led the technical seminar. Hsui first cut through some of the confusing notions that have been circulating about the Red. “You cannot buy an entire camera package for $17,500,” Hsui clarified. “That doesn’t get you the monitor, any lenses or recording media. There are a lot of DPs purchasing the cameras but to really be able to shoot with it, you’re looking at a cost of more than $50,000.”

The Red One system can take PL, Canon EF and Nikon F mounts and others via adapters. Without going into the issue of the difference between Bayer pattern technology and systems using separate red, green and blue sensors, we can say the Red’s single-sensor CMOS imager has several different resolution settings with “4K” being the highest. At this setting the image area is almost identical to that of a super 35 frame. At the “2K” setting, the image area is virtually the same as a frame of 16mm. The camera can record at up to 120 fps but only at the lower resolution.

Imaging data from the camera can be recorded to hard drive and flash drive-based systems that dock with the camera, much like a film magazine. The RAW data actually goes through a proprietary form of wavelet compression to a file format using the company’s .r3d codec. Many different looks-gammas, color casts, etc.-can be created during or prior to the actual shoot. As with RAW shooting in still photography, these augmentations are not “baked in,” rather the cinematographer or digital imaging technician can create “looks” and use the camera to store these onto an internal SD card. “You could call these LUTS,” says Hsui, likening this picture augmentation information to look-up tables used in postproduction. “The data on the SD card can be applied later in post but you’re never baking in any kind of ‘look’ during the photography.”

All look settings for the Red One system are encoded within the .r3d as metadata. This information is recorded onto either CF Cards, RED Raid Drive, or RED SSD (solid state drive).  Individual look settings can be saved onto an SD card for ease of look migration to multiple cameras. When the .r3d footage is viewed in post, there are various available post tools that will allow you to see and/or change the .r3d’s accompanying metadata values.

The Red One’s native “neutral” color temperature is designed to be 5000K, oddly in-between the two internationally recognized standards of 3200K (for tungsten light) and 5600K (for daylight). Hsui explained that for best technical results with the Red’s Mysterium chip, cinematographers should use filtration on camera or lights to work at 5000K. While users are shooting with Red cameras at many different color temperatures and correcting their images in post, Hsui noted that such manipulation can introduce noise and compromise latitude (as is true with any digital manipulation) and so he recommends working at the 5000K color temperature the sensor is maximized for in order to get, “cleaner blacks and somewhat better latitude” than might be possible if heavy color correction is required in post.

Hsui also touched on important issues such as sensor cleaning. Like any digital image sensor, he explained, the Red’s is very susceptible to serious damage and should only be cleaned when necessary and by trained personnel with specially designed tools. He didn’t officially endorse the sensor cleaning tools of the company Arctic Butterfly, though he did mention that the technicians at SIM use it to clean the sensors.

Like so much technology today, the Red system has been changing rapidly. The firmware [or “builds”] consistently change and it can cause a problem in post to upgrade mid-show. Hsui described each build as having its own “personality.” One DP attending the presentation had said that he’d experienced several instances where one build had overheated in desert conditions where a firmware upgrade had seemed to fix the problem. Another recounted a similar overheating problem that he resolved using Ammonium Nitrate cold packs. Matt Uhry, a cinematographer who spoke about his experience with the Red he purchased, noted that he has never had a schedule-compromising mechanical problem on the projects he’s used it for but he says he does bring a portable fan to the set and trains it on the camera in situations were overheating might become an issue. “Used correctly,” Uhry says, “the camera can give you incredibly good images at a relatively low initial cost compared to cameras of similar quality and potentially reduce costs further by being tapeless. I’ve also found I could offset the investment somewhat by occasionally renting mine out. I’ve been very happy with my investment so far.”

However, both Hsui and Uhry also pointed out that Red cameras have their quirks and have simply not undergone the same type of quality control that its well-known competitors put their gear through-people who shoot with the Red camera, are in a sense, beta testing the product. That said, even the skeptics at the meeting were impressed with pictures that came out of the camera and an overall design approach with roots more in film cameras than in ENG equipment.

Uhry, who fielded many questions and guided attendees through the camera’s functions and menu system, was full of praise for Red’s capability. But he also didn’t try to deflect the concerned questions of potential users. The DP has used it successfully on a number of commercial spots and was pleased with the work method and the results but he also offered this caveat to people concerned that one inexplicable glitch at the wrong time could wreak havoc on a production or a career: “Think of it like experimental surgery,” he mused. “It could be great for you or it could kill you. The more you know about it, the better.”
“There are many new camera systems evolving constantly,” Poster summed up. “Local 600 needs to ensure that our members, from the cinematographer to the loader, are the very best technicians available for any production using the Red or any other imaging capturing device presently in use or coming down the pike.”