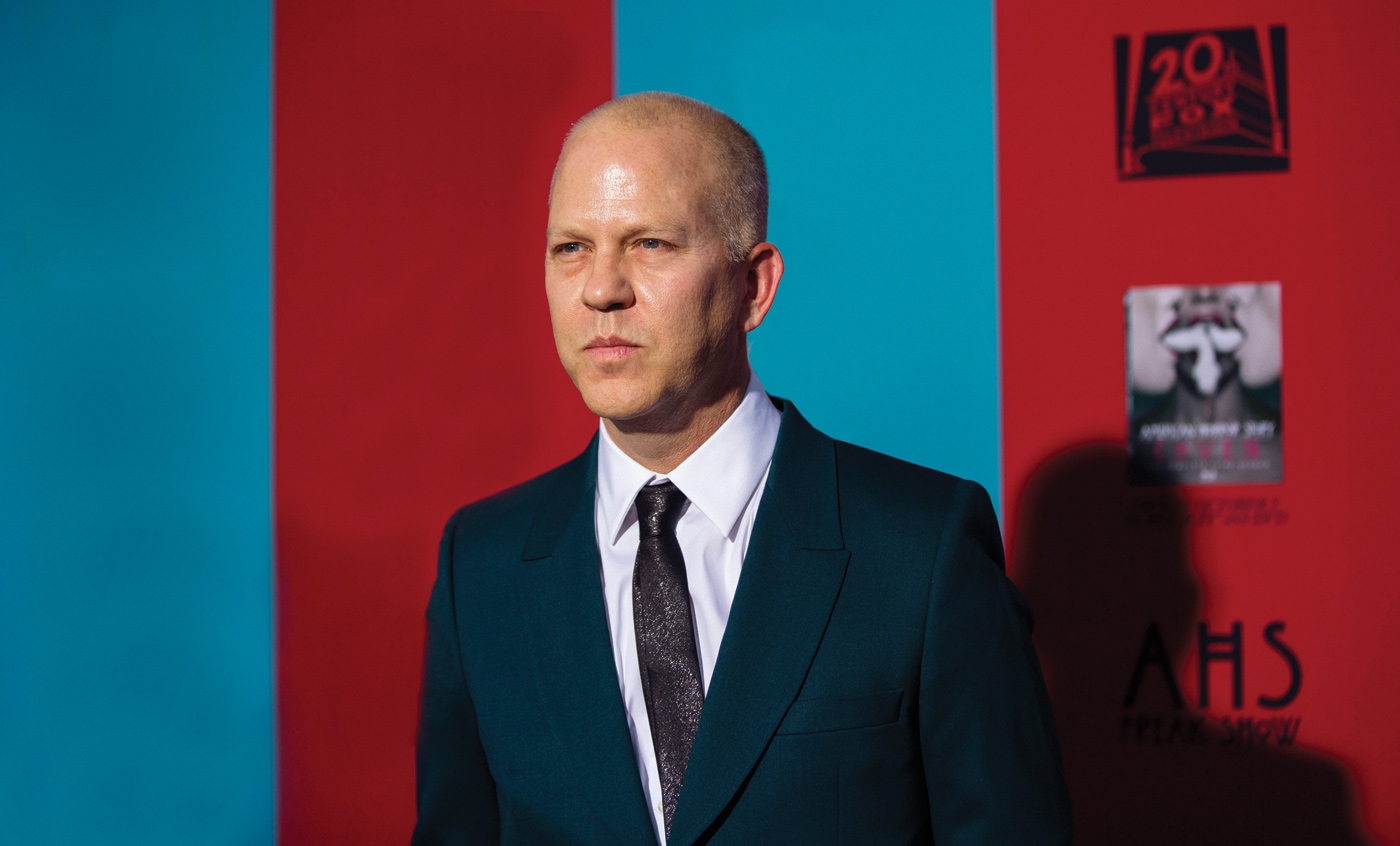 Writer-producer-director Ryan Murphy is more than a hyphenate simply by title – he is also one in style. Murphy has made a career of fashioning dramatic, bizarre and creatively frightening imagery with Michael Goi, ASC, for his award-winning FX series, American Horror Story, now in its fifth season. And he’s also spent six years working alongside cinematographers Christopher Baffa, ASC and Joaquin Sedillo, ASC, shooting Fox’s high-school-musical misfit comedy, Glee; most recently, he managed to combine both those genres – comedy and horror – into the new Scream Queens. His early series, Nip/Tuck, about the twisted lives of a pair of plastic surgeons, ran for six years on FX, and, like all his efforts, was hugely popular. In 2014, Murphy ventured into more traditional drama with his Emmy®-winning TV movie, The Normal Heart; his newest project, The People vs. O.J. Simpson: American Crime Story, pairs him with an ASC-award winner, Nelson Cragg. This newest effort, which recreates the O.J. Simpson murder trial from the inside out, is the first season of a limited series for FX Networks focusing on celebrity crime. While the visuals are more restrained than those in Horror Story, Murphy and Cragg have still created a riveting crime thriller, mostly by placing the viewer right in the heart of the drama through an evocative use of handheld and Steadicam.

ICG: The People vs. O.J. Simpson is a different kind of series for you – how did it come about? Ryan Murphy: I’m somebody who usually likes to be working on the impossibly difficult project. I had just finished The Normal Heart, which took a decade to get made. So I called up my agent and asked, “What’s the best, great script that’s not getting made right now?” and he said, “I know exactly what it is,” and sent me the first two scripts of this.

And that hooked you right away? I thought it was brilliant, because it wasn’t the typical historical piece. It was a story about the birth of a lot of different things that still resonate today – the 24-hour news cycle and a certain kind of celebrity. And the inherent race and domestic-violence issues were so topical. I couldn’t believe it hadn’t been made.

This is the first time you’ve worked with Nelson Cragg – how did you come to choose him? It’s interesting with me and cinematographers because I have just a few that I really love and work with on my shows – Michael Goi, Joaquin Sedillo and Chris Baffa – and that’s it! [Producers] Brad Simpson and Nina Jacobson had met with Nelson and said to me, “You have got to meet this guy.” I knew his work and liked it, but when I walked into the room, I couldn’t believe how young he was!

Nelson told me he’d done some preparation before that meeting. He did so much prep before coming to talk about it. He had brilliant ideas, especially about the flashbacks, conspiracy theories, and crime recreations, and I had a very strong idea about that as well. I said, “You’re the first person that I’ve met who sees it like I do.” His approach was my approach, and that’s why I hired him.

How would you describe your creative partnership? It was a true collaboration. And what’s funny is that he’s 20 years younger than me, so he was really young when [the O.J. Simpson trial] happened, but he still remembers it and had strong opinions. I really enjoyed the experience of his take on the material because of that.

How did you want to tell this story from a visual standpoint? My work has always been steeped in a theatrical approach, and I didn’t want do that for this project. Here, the writing and acting are what mattered most. Of course the big challenge is that we all know this case so well. I knew I didn’t want to shoot it like a documentary, because at the core there are very modern themes that really resonate today, and if you do it like a museum piece, it takes you out of the modern themes. The key really became: let’s show [viewers] something they didn’t see and the things they don’t know. We all know the Bronco chase; we all know what O.J.’s house looks like. We wanted to reveal new things within a vernacular of what was already known. Nelson felt the same way, and, like me, wanted the camera to move. He said: “I really want to shoot this in a different way, where the camera moves, but not at all in a self-conscious way.”

Speaking of that, one of the show’s signature looks comprises some amazing “oners,” shot by your A-camera operator Andrew Mitchell, SOC. Andrew is a true artist. And those came about because, particularly in the first and second episodes, there was a lot of catch-up in the narrative, explaining what happened. We spent time staging that, with the actors almost like baseball players on the field, handing off to one another. And the architecture of the set – including the various houses and the courtroom – was so interesting, I wanted to incorporate that into the acting. The best way to handle all of that was with “oners.” I felt they had a certain pace and electricity and moved the story forward. We would do them, and then do coverage. Nine times out of ten, I would get in post, and the camerawork was so great and naturalistic, we’d end up just using [the oners].

Another big part of the look is your use of 360’s, which helps get the audience inside the characters’ heads, particularly O.J.’s. Again, one of the challenges of this show was, “We all know the case so well – how do you show something we haven’t all seen? So, for example, when O.J. arrives at Nicole’s funeral, we paid a lot of attention to Jeffrey Toobin’s book about the case, The Run of His Life, and read countless accounts of what O.J. saw, went through and felt that day. What is it like to be at the funeral of your wife? What do you see? On one side, you see photographers taking your picture, because you’re a celebrity, and then, on the other side, you turn and see people screaming that you’re a murderer, and then behind them are people cheering your name. That’s a lot to take in for anybody. And the use of 360’s, as you mentioned, was a way to have the audience experience those feelings. That’s how the material is fresh to me.

Both Andrew and B-camera operator Brice Reid spoke of the freedom they had on set to be creative and find great shots. I’ve worked with Brice and Andrew for a long time. The actors have to trust those operators, to feel comfortable to deliver the performance they want, and they did, because they were always coming from a place of story, not thinking about getting flashy shots. The thing that I loved with both them and Nelson was, I would say, “Okay, let’s do something that we think is typical that will help tell the story.” Then I would tell them, “Do something inventive. Show me something different.” And nine times out of ten, those would be the shots I would use.

A large percentage of the series takes place in the courtroom. How did you approach that? It was a big question going in – how do you do days and days, and scenes and scenes in that courtroom, and make them all visually different? I had never done a law drama, but I knew I didn’t want to do the typical “master and over” – I wanted those scenes to be exciting and different. The solution was to shoot four-camera, so when we were designing the set, Nelson was really involved – he could help figure out which walls could fly and which would not, and where to put holes to place the camera, so that it felt both real and naturalistic, and vibrant and alive.

A key sequence in Episode 2 is the Bronco chase up the 405 Freeway. How did you approach filming that? First of all, I had never done any kind of action scene or anything that big. But I really enjoyed it, mainly because Nelson prepped the shit out of it! So, when we arrived, we knew what we were doing. We started both days with, “Let’s get inside the Bronco first.” That was the thing I was most fascinated with, because that’s a place where we never knew what happened. All of the dialogue [inside the Bronco] is based on 911 transcripts and eyewitness accounts, and I approached that whole episode like a thriller. It’s interesting: when people watch it in screenings, they gasp or lean forward in their seats when O.J. puts the gun to his head. Everybody knows he didn’t kill himself, but I think the camerawork is so intimate and electric that you get caught up in the emotion of it, which was my goal.

Where did you go from there? So we started inside the Bronco and built out. Once we had Cuba Gooding, Jr.’s performance [as O.J.], we would then go for the broader scope and do the chase and POV shots. One thing that was important was that we were always slavish about the scripts for that sequence. We listened to what the scripts said, so that when it would cut away to high aerials from ABC News from 1994, we knew that it would match perfectly. Shooting the chase was enthralling and very, very difficult – probably the most difficult thing I did on that show. And also the most rewarding.

You had a lot of location work, most importantly in the Bundy crime scene, which you recreated. It was very interesting recreating those famous locations. The original Bundy location, where the murders occurred, had been changed years ago, because there were so many looky-loos. We built that a block or so away – after having studied hundreds and hundreds of photos. Of course, we had to get that right, and our production designer, Jeffrey Mossa, and his department did an amazing job. Everybody knows what South Bundy Drive looked like at that time. And everybody knows what the criminal courtroom looked like. I wanted to make sure every potted plant, every pencil, even the hourglass on Judge Ito’s desk in that courtroom was exact.

The crime itself is seen mostly in flashbacks and conspiracy-theory discussions. Why is that? That’s what’s fascinating about this experience for me – it’s a show about violence that doesn’t show violence. Ultimately it’s about two people who were brutally murdered, and I wanted to be respectful of that. I didn’t want anything to be outrageous or too “in your face.” But I wanted it to be fresh and inventive. And I think between myself, the other directors, and Nelson, we definitely accomplished that.