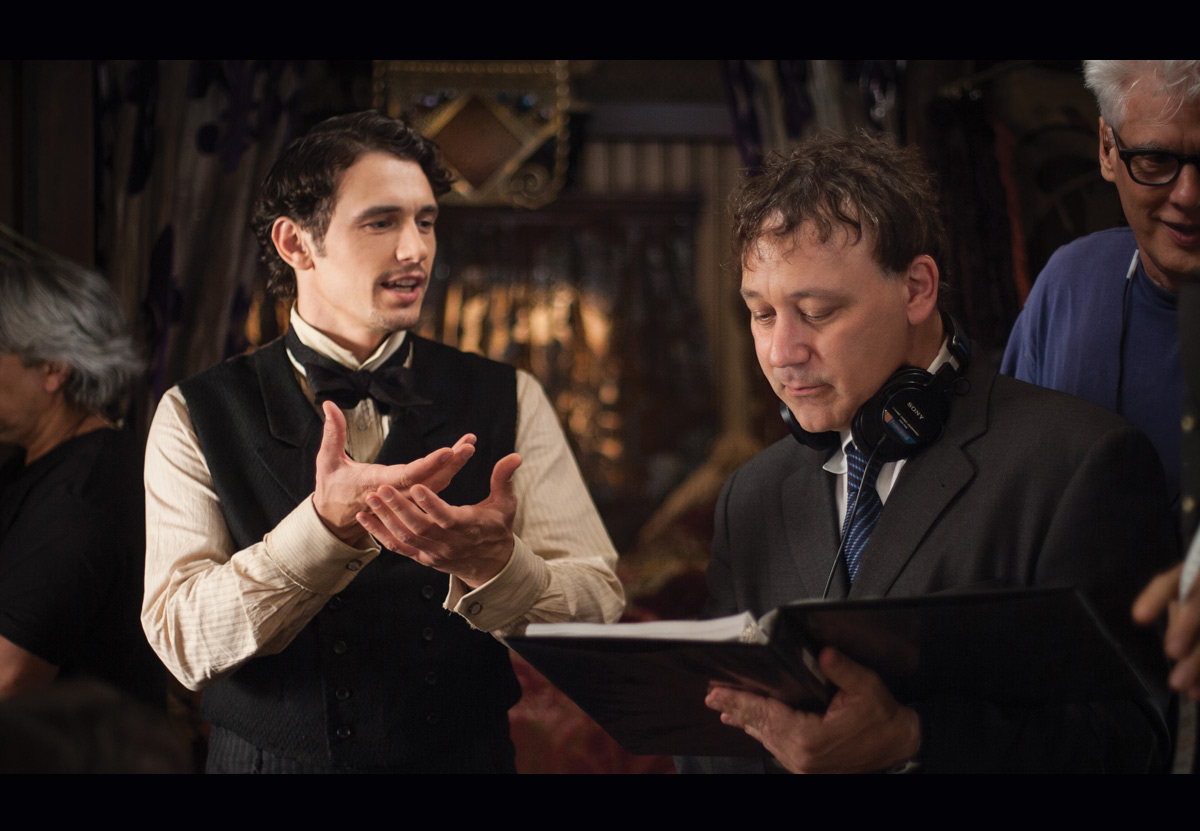 Wunderkind Sam Raimi began making Super-8 movies in his teens. Barely in his twenties, he wrote and directed The Evil Dead (1981), an ultra-low-budget horror classic that pulled audiences headlong into the scare zone via Raimi’s homemade “shaky cam” – a camera mounted in the center of a two-by-four and carried by a pair of grips running through the woods. While Raimi’s ingenious style swiftly matured with two Evil Dead follow-ups, he also focused his talents on serious dramas, including One False Move and The Gift, and became a producer for several features and TV series, including Hercules: The Legendary Journeys, Xena: Warrior Princess and Spartacus: Vengeance.

Raimi’s much-publicized love of comic books made him a natural to bring Spider-Man to the screen, directing a trilogy of mega-blockbusters with the famous webslinger. In 2009, he returned to his down-and-dirty horror roots with Drag Me to Hell, shot by his once and future DP Peter Deming, ASC, and is now involved with a Poltergeist remake. With the release of Oz: The Great and Powerful, Raimi has helmed what he describes as “family entertainment,” set a number of years prior to when The Wizard of Oz takes place. Kevin Martin talked with Raimi about old school, new school, and the most important consideration when nicking a wheelchair from an elder-care center for a dolly shot.

Did you have any trepidation tackling Oz? The one feature attempt at a follow-up [1985’s Return to Oz] wasn’t well received. Raimi: It wasn’t any promise of financial success that drew me, but the screenplay written by Mitchell Kapner. I was fascinated by the flawed main character [played by James Franco] and felt uplifted by his transformation into a better person. There were surprises and humor, and I appreciated that it was sweet and lighthearted. Plus the fantasy aspect appealed to me, especially how the writer incorporated descriptions of Oz that went right back to Baum’s book. Putting a great storyboard artist [Philip Keller] and all those terrific previs artists at The Third Floor to work helping me develop shots depicting this landscape made for a wonderfully creative experience.

You worked with Peter Deming many years back on Evil Dead 2, and then again recently on Drag Me To Hell. What’s your process like together? I’ll tell Peter I want a scary mood for a scene, for example  – not that he doesn’t know it already – and that he has got to make a creature with makeup on fit without distracting away from what I’m trying to create. Then he’ll come back with, “How about a single-source beam of moonlight coming through? That’ll get you some scary shadows, and it’ll work for the makeup as long as you let this light rake the performer.” Basically I tell him what I need to feel, and he comes up with a lighting solution that addresses my concerns. The shooting position usually gets worked out during previs, but even that early Peter might stick his head in and say, “I see where you’re going with this Sam, but I don’t think it works for this reason.” I always take his input into account.

So working with the DP at the previs stage is productive? Well, there’s a certain percentage of the time that when Peter and I go on set and see the actors work through the scene, we throw out the previs and put our heads together to figure out a new way to shoot it. This doesn’t mean the prep was a wasted effort, just that it was part of what we needed to get us to a point where we could go about making the scene based on the best decisions at that moment.

You were innovative with camera movement in your early films, coming up with makeshift rigs. Have new digital technologies removed those creative limitations? [Having that early experience] definitely changes the way you imagine the shots, because now it is all about finding what is the best way to present this image or idea. It used to be that I never could get to the point of considering what might be the best way. I just knew I needed to get the camera up twenty feet off the ground and start swinging it, and that there weren’t any rigs I could afford on a $250 budget. It was about what was possible and best, rather than just what’s best.

So, art thrives on restrictions. But try not to take that axiom to extremes? Yes, I do believe that saying. It helps you really think about how every shot is going to make you feel. If you’re wrapped around a rope x-number of feet up, and this guy is going to let me go and I’ll be swinging from thirty feet up in an arc, what is that going to feel like for an audience? Will they feel like they’re floating, or is this more of a rollercoaster move? And the feeling is different depending on the tool used.

Give us an example. Like when you use a shopping cart to move the camera instead of a wheelchair, you’re not as low to the ground, which alters the feel. So when you’re thinking about whether you’re going to steal the item from the local [store] or a convalescent home [laughs], it’s with the idea, “How high off the ground will this get the camera?”

And those shopping carts have got a lot of wiggle in the wheels! Oh, yeah. I know it’ll get a little shaky with the shopping cart if we’re going past five miles per hour, but in the wheelchair we can get a little lower and smoother! Now I draw the shots and don’t usually consider how they will be achieved, though more often than not, Technocrane is the answer.

You employed Introvision on Darkman and Army of Darkness, which let you combine live action and visual effects on stage. Is your preference still to get as much in-camera as possible? For Oz, [production designer] Robert Stromberg and I wanted to build as much as possible to have control over the look of the film. We felt building his designs would let us actually see the light dapple on the forest leaves and the color of those leaves. That meant when we gave the element over to 700 CG artists, they wouldn’t just have to use their imaginations to figure out what they needed to put in, because the cues from stage and how that led off into the distance would direct them towards how the CG extension should look and feel. Of course they had a production design sketch to follow, but this really let them see everything needed to extend what Robert had built and Peter had lit on the set. I could draw on all that artistic talent but keep it focused narrowly on the specific objectives of the scene.

Were there concerns about using digital capture, especially with getting it to tie in visually with the original The Wizard of Oz? Peter did a great job of getting it to look like film, but I’m disappointed by the limitations of the current capture process. I can’t have somebody run across frame without being distracted by all the strobing. We in the industry may have been sold the digital process a bit too soon, being told “film is dead” before that was the case. I think we had something better, something where the Academy had created agreed-upon standards. But now it is the Wild West; too many systems don’t talk to one another, so many technologies are independently developed, and getting all these aspects addressed isn’t what you want to be concentrating on while trying to make a feature in a responsible way.

So the hunger for higher resolutions is premature, and maybe artificial? I think Sony is going to 6K … or is it 8K? [Laughs.] But, either way, once they set that standard, it is fine for stuff shot on film because you can always rescan at the higher resolution. But for all of us who captured 4K or less, what can we do? We’re stuck. For this project, since we shot stereoscopic, digital was the way to go, but film still seems infinitely preferable to me.

Shooting in stereo must have made it tempting to do some extreme camera moves, like those funky Evil Dead track-ins. I really didn’t think that style was called for on this picture. The Evil Dead films were done for no money, so I tried to scare the audience with strange camera moves and devices that suggested a supernatural force that didn’t really exist in our world. It was the most effectively cheap way to pull that off.

And with Oz there is a much different intent?

Definitely. We want to say this world exists. While it may be something far apart from what we see in our world, the style of presentation isn’t altered in order to create it. The film is presented in a traditional manner, but what you’re seeing will be different because of where Baum’s story takes place and how we created that. Robert [Stromberg] was also influenced by the look of early Disney films, and that worked for me because I wanted to make a real Disney picture – a modern version of one, anyway. I don’t know if he took that to heart, but he certainly delivered on it.

The Evil Dead is now 32 years old. Does this year’s remake give you cause to think of your picture as being part of film history? If someone else had remade it, I’d probably be thinking, “Cool, they like it that much!” I’ve seen it; it’s great; it’s very scary, and you’re hearing one of the producers of the film tell you this, so take it all with a grain of salt. [Laughs.] I think Fede Alvarez [Panic Attack!] did a great job delivering an audience pleaser while demonstrating his own voice as director. He also managed to throw in a few acknowledgements of the original that should be fun for the fans.