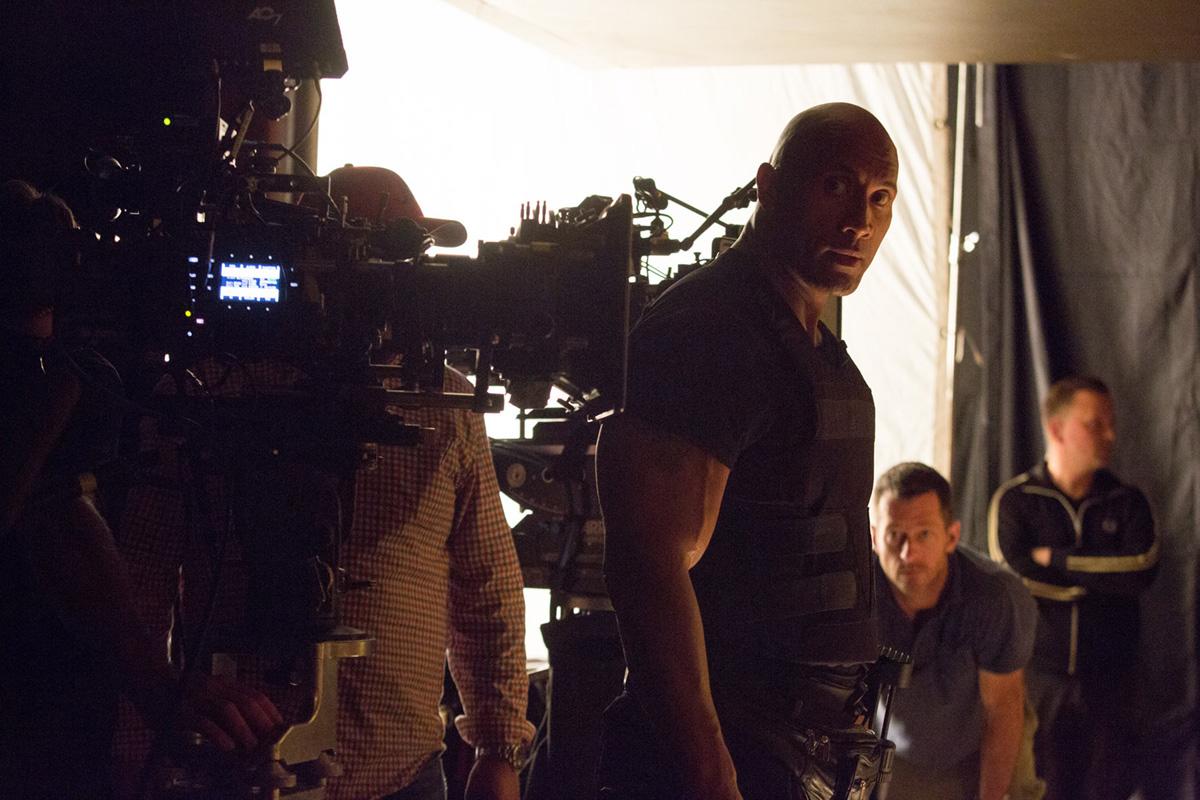 The classic buddy cop movie typically involves two guys (updated in recent years with female leads) of opposite types that have joined forces to solve a crime, often with comedic results. Although the genre reached its pinnacle in the 1980s with blockbusters like 48 Hours, Beverly Hills Cop, and Lethal Weapon, it still remains popular with movie audiences. Directed by Rawson Marshall Thurber, Central Intelligence is a classic throwback to the buddy cop movie.

Central Intelligence was directed by Rawson Marshall Thurber (We’re the Millers, Dodgeball: A True Underdog Story) and shot by cinematographer Barry Peterson (Vacation, 22 Jump Street). Growing up in Canada, Peterson was an avid filmmaker in his teen years, building his own sets, editing, and screening his movies at film festivals. His early filmmaking experience led him to visual effects, where he worked as a VFX cinematographer for seven years in Los Angeles before returning to work at an effects house in his native Toronto. 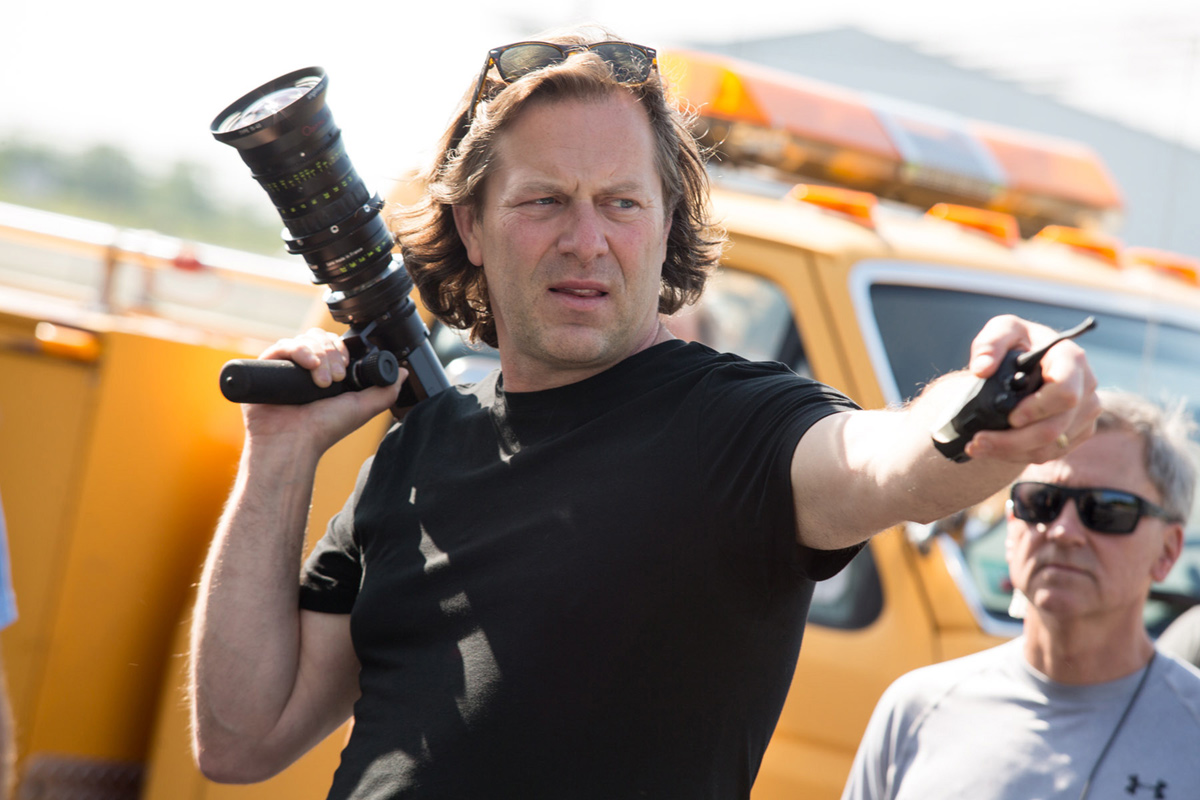 “Eventually I was able to see the writing on the wall, that the effects I was doing – motion control and miniatures – were headed to the CGI world,” Peterson reflects. “I knew I had to start doing something different and began shooting music videos, commercials, short films, and low-budget Canadian films. That eventually got me back to the States, where I started shooting more commercials and movies.”

Peterson teamed with Thurber on We’re the Millers (2013) and Thurber thought the DP would be a great collaborator for Central Intelligence. The first thing they agreed on was that they didn’t want the film to look like a comedy, which typically uses wide-angle lenses to allow actors to perform in a two shot and have the freedom to improvise.

“We were both adamant about not having the typical wide-angle silly comedy look,” Peterson states. “A lens can distort something, but I don’t know if it makes the material funny. I think when I place a heavy hand on something with a lens or specific lighting style it can sometimes take away from the comedy. I try to make people believe they’re watching a real action movie, and it’s even better if there happens to be something funny.”

Thurber and Peterson screened many classic action comedies from the 1970s, ’80s, and ’90s during prep, as they felt that the film’s realism perfectly fit the genre. Walter Hill’s 1982 film 48 Hours (shot by Ric Waite) was a major influence for its combination of comedic and tense tones. “There are moments where you’re wondering what is going to happen, and there are moments where you’re just laughing,” Peterson describes of Central Intelligence. “For us it’s a lot of fun to be able to blend those two worlds.”

That being said, Thurber and Peterson agreed the film should look like an action movie. “When you’re dealing with someone like Dwayne Johnson, he’s already got you halfway there,” says Peterson about shooting action comedy. “The surprising thing is that Kevin Hart steps in, and he’s equally physical, which made it easier for us. We had two very physically fit and active people that could do almost anything.” 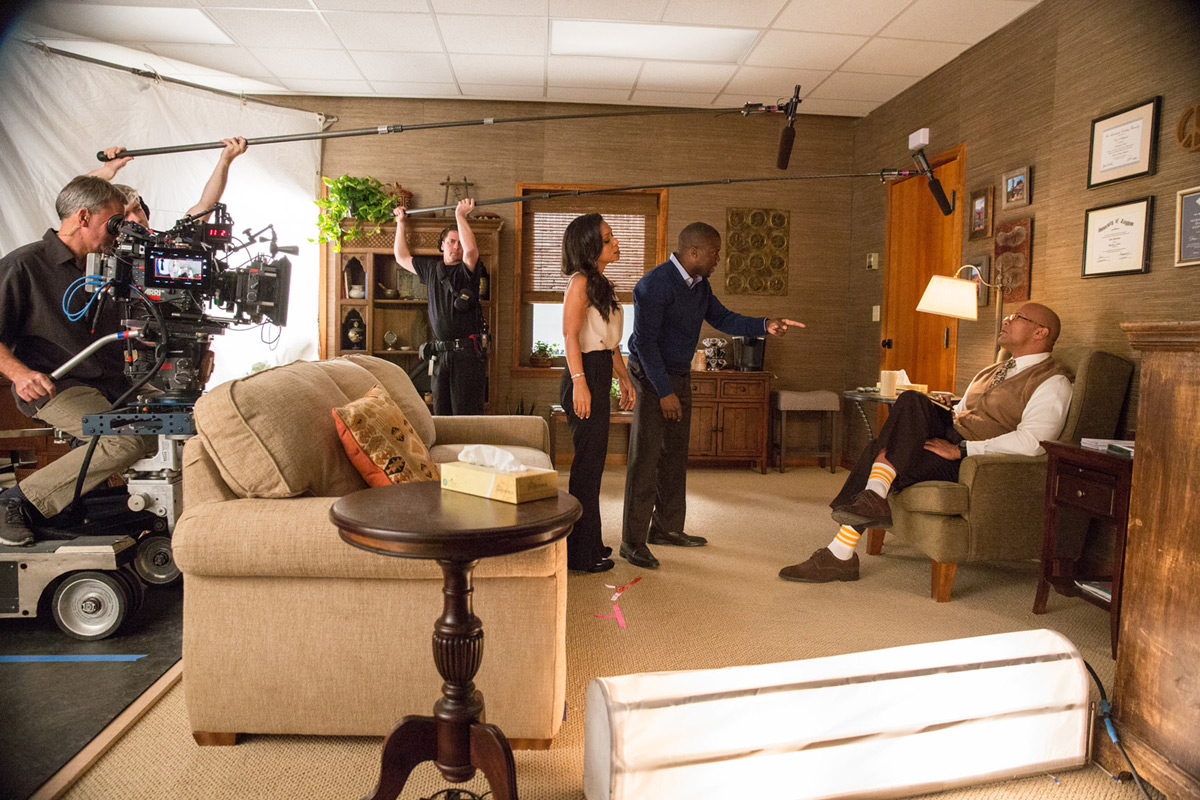 Central Intelligence was shot with ARRI ALEXA XT cameras capturing 2.7K ARRIRAW to on-board Codex recorders. Peterson is a huge fan of the ALEXA system and feels it’s the closest thing to film – in particular its latitude and ergonomics.

“For me, I’m much more interested in latitude than resolution,” Peterson reveals. “I think resolution is a bit of a trick word these days, and it’s something that’s baffled people. ‘If it’s 4K, it’s got to be better than 2K, right?’ I don’t think most people understand the concept of visuals – the toe, as well as the curves, and how it just sees things. Regarding resolution, image scientists have said different things to me – from 8K to 3K. For me, I just like how the Alexa sees things – how the chip resolves images, whether they’re 3.2K, 1.1K or 4K. To me, the specifics do not matter as much as the way the image holds up when viewed on a big screen.”

Most comedies are framed in 1.85:1, but Peterson and Thurber chose 2:39:1 because more iconic action comedies have been shot in the anamorphic format. Peterson loves playing with wide screen and seeing characters staged both far left and close right.

He mainly shot with Cooke S4 Primes but also used Angénieux Optimo 24-290 and 17-80 zooms. Peterson is a longtime fan of the Cookes because of the coatings and “the fact that I don’t have to deal with flares that I don’t want,” he adds. “They’re very crisp and don’t breathe. They’re just fantastic lenses.”

In terms of focal lengths, unless they were shooting in a car, Peterson never went with anything wider than a 27 mm and would use a 65 or 75 mm for singles. There was talk about using anamorphic lenses, but because of visual effects and the added complexity of anamorphic lens breathing and short focus, Peterson didn’t think it was the right move for them. Exposures were typically kept in the 4–5.6 range for consistency.

“In a comedy like this, I try hard to show subtleties in people’s faces and their reactions, which are very important to see,” Peterson explains. “If I’m at a f/2, you can lose some of that. Especially for a two shot, where you have one guy who is back six inches and you’re missing something on his face, or his reaction. Conversely, if the narrative situation shifts a little bit I might try and keep the depth of field so shallow that we don’t know what’s going on. We’re basically telling people where to look with depth of field.”

The production always had three ALEXA XT camera bodies on set – one built for Steadicam, as well as an A and B camera for every shot. B-camera was typically capturing reactions or close-ups of the two main characters. On-set workflow was handled by Fotokem’s NextLab. Peterson and DIT Justin Wells performed on-set color correction, creating a LUT that emulated 500-ASA film stock, and then nuancing the look shot-by-shot or scene-by-scene with CDL’s, which they viewed later in dailies via the Pix system. Because of today’s short scheduling of movies, Peterson tries his best to deliver footage that is as close to a finished film as possible. “Obviously there are subtleties that you’re going to alter in post, like shifting color, but it was important that when I did dailies I knew that two weeks after we finished principal, they would be having their first screening at some theater in Burbank.” 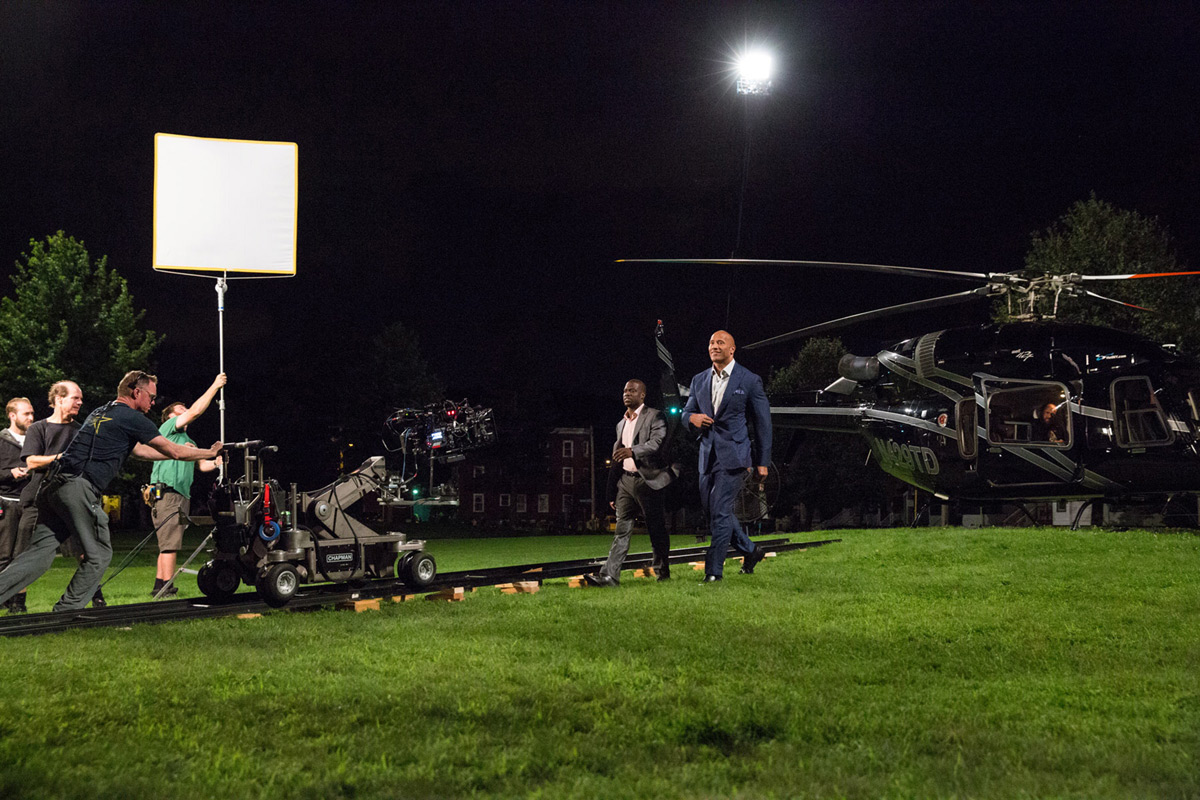 One major challenge was dealing with two different skin tones in Dwayne Johnson and Kevin Hart. “From day to day, room to room and set to set, trying to balance [a large variance in skin tones] in lighting is always a challenge,” Peterson shares.

For B-camera operator Jason Ellson, SOC, shooting overs was a monumental task. “You’ve got The Rock, who is enormous, and then you’ve got Kevin Hart, who is the complete opposite in terms of size,” Ellson explains. “We’d try and put the A camera with a wider over, and then the B camera would try and get the tighter over. When trying to shoot over The Rock, the cameras were frequently off axis because he’s just so big – we would always struggle with getting a good eye line to work with both cameras. This is the fifth movie I’ve done with Dan Gold on the A camera along with Barry; we have a great dialogue and know how each person works.”

The most ambitious set to light was a high school gymnasium where a young, overweight Bob Stone is humiliated by the entire student body. It starts off as a daytime gymnasium during Stone’s youth, and it later becomes the location where his reunion is held. Peterson and crew had to rig the entire gym for both day and night shooting. “That was quite the challenge, especially with four- or five-hundred extras and being able to flip back and forth relatively quickly,” he says. “We put up fifty Spacelights all rigged up into our metalwork. We also had some T12s rigged above to emulate sunlight. When we switched to the night of the reunion, we set up a whole rock ’n’ roll system that we had to integrate overnight.”

Peterson’s favorite lighting instrument on the film was his Barger Lite 6-Lite V2. “There’s something about the quality of this light,” he offers. “It’s a 6K, and you can click on one bulb at a time – each one is 1K, dimmable, and offers soft diffusion. You put a baffle on it, a Chimera, put it through another big rag, and it’s super-soft, beautiful-looking light and my go-to key.”

Because of the amount of stunt and action work, the Local 600 team ran the gamut in terms of camera-movement gear – dollies, Steadicam by Ellson, and Technocrane with a 4-axis-gimbal Oculus camera head. Peterson describes an escape sequence (shot on Technocrane) during which Johnson’s and Hart’s characters escape by jumping out of a window.

“We chased two characters jump out of a window as they went running toward a blue screen, and when they go through the window and the glass explodes, we tilt and scale down, seeing them falling toward what ends up being a big air balloon,” Peterson recounts. “It was one of our only action sequences that had a blue screen because we physically jumped out of a building.” 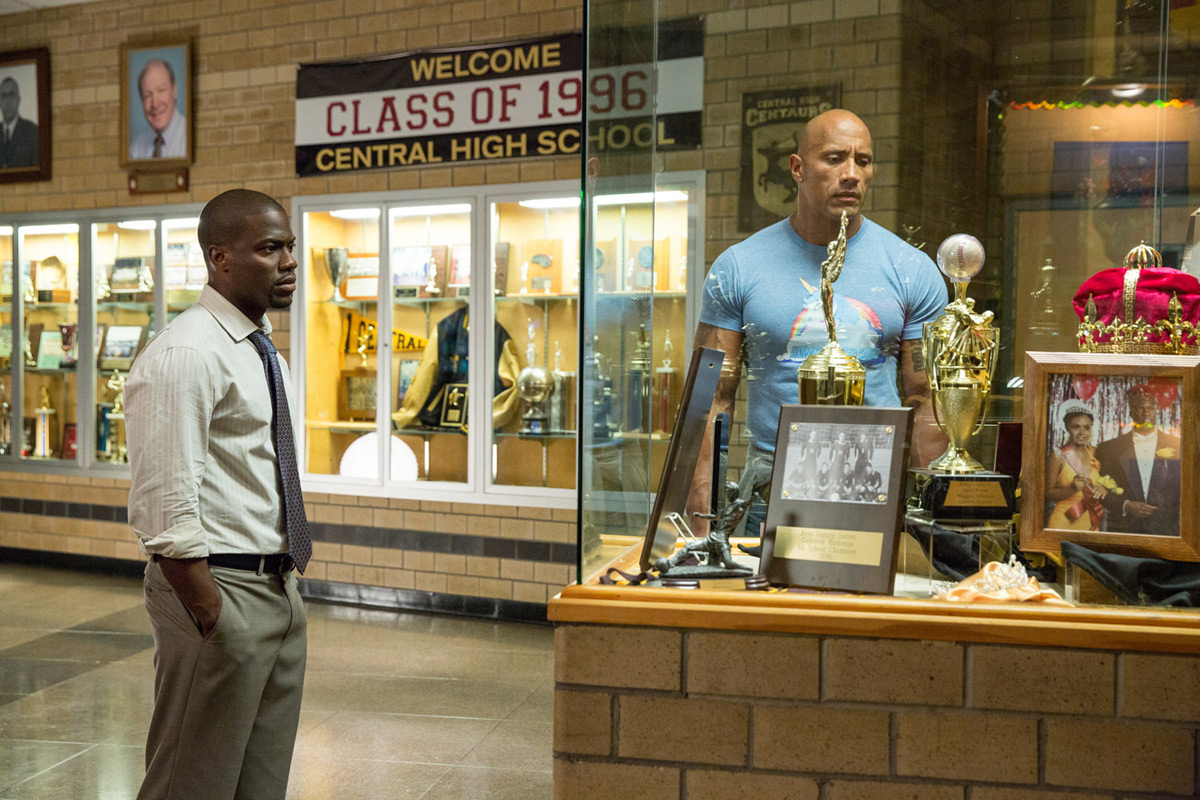 “We’d lay the cameras on their sides and get as close as we could to get more resolution,” explains Peterson. “There would be sequences in that gymnasium where we had our two or three principal cameras, and then we had six of Weta’s, and they also had witness cameras all over the place. It was very complex.

“They’re synchronizing all of the data from different angles so they can see how Dwayne’s nose would move in a particular way,” Peterson continues. “We’d put a 75-millimeter on one of the cameras on its side looking at Dwayne’s left side, and then you would have one central, then you’d have one slight right, and then one half right. No matter how Dwayne moved his head, it was captured with the cameras.”

“The advantage of doing the main unit as well is that I’m watching what Barry is doing and how gaffer Jimmy Cox is lighting different scenes,” Ellson describes. “Sometimes I’ll just take a few reference photos, thinking or knowing that might be something I’m going to come back to. I’ll also have a long conversation with Barry and just go from there. Barry really gives us the freedom to create.”

Color grade (as of this writing) was scheduled to take place at FotoKem with colorist Kostas Theodosiou. Peterson, who has sat in test screenings with audiences who have reacted well to the action comedy, concludes that, “visually, when I look at the film, I’m pretty proud. It looks fantastic, moves well, and the women look beautiful. I’m really happy with the end result.”