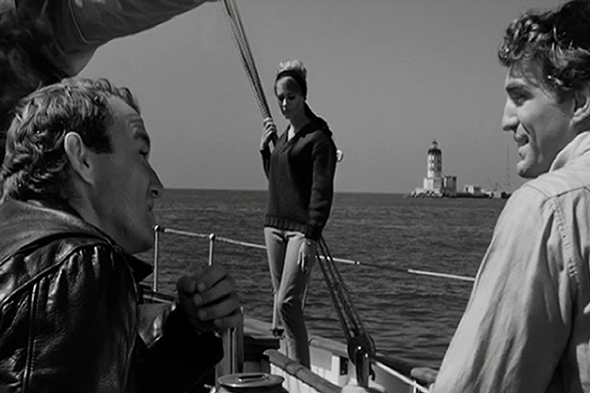 The independent film is the latest in a series of classic movies shown at the renovated theater, which has stood in the heart of the film world’s capital, Hollywood Boulevard, since 1922.

This lost black and white gem was made in 1964-65 but never made it into theaters. It was shot by Vilmos Zsigmond, ASC — who went by William because it sounded more American — and resurrected by Jack Robinette, who produced Summer Children, with his fellow UCLA film school graduate, James Bruner, directing.

The story takes place on a yacht sailing to Catalina and at practical locations on the island and in Los Angeles. The main characters include two men in their early 20s, vying for the attention of a pretty young woman. Stuart Anderson, Valora Noland, John Kulhanek, Steve Bobbitt and Sandy Gabriel were cast in leading roles. The images were augmented by a music score created by Jaime Mendoza-Nava and songs performed by The Deacons, a popular rock and roll group of the era.

After the long and enthusiastic applause at screening’s end died down, Robinette, his cousin Edie Robinette-Petrachi and Zsigmond, took to the stage for an audience Q & A.

The first question was why don’t they make films like this any more? Other fans asked why aren’t there black and white movies today and why aren’t there more theaters like The Egyptian? No one had any easy answers.

Robinette told the audience that audiences never saw Summer Children before 2011 because both the film and the man who had agreed to book it at festivals and distribute it to cinemas had disappeared.

When Robinette told his cousin what had happened during a family reunion in 2003, she appointed herself detective and discovered that the distributer did not pay the lab bill at DeLuxe, in Los Angeles, so no prints were made available.

Robinette-Petrachi then tracked down crewmembers from 40 years ago, and each had different ideas about where the film might be. Some said Paris. Others said Berlin. She contacted Jim Krause, who worked for DeLuxe when the film was produced, and had subsequently retired.

“Jim told us that sometimes old films were given to archives at UCLA and other places,” recalled Robinette-Petrachi [[correct?]]. “We checked, but didn’t find anything. Richard Smith at the UCLA archives suggested that AMIA [Association of Moving Image Archivists] might help us find the film, so we enlisted their help.”

One day, Krause called back to report a postproduction facility in New York had moved the orphan film from one archive to another over the years.

“He said we were just in time,” she said. “The film was in a vault in New Jersey. It was scheduled to be destroyed in 14 days.”

More than 40 metal cans containing the original negative, two interpositives and an optical sound track, were saved. Robinette-Petrachi and Robinette held their collective breath when the cans were opened and the reels were threaded for the first time in 40 years.

“No dust-busting was necessary and the splices were in perfect condition,” she said.

Initially, a one light pass was made at Post Logic to create DVDs for viewing before Zsigmond was asked to come to HTV Illuminate to time the film to his liking.

“It was very important for Vilmos to be present for the restoration process,” Robinette-Petrachi stressed. “He was the only one who knew how the film should be timed and balanced.”

The audio track with dialogue and other sound was also in good shape.

The missing link was the music. So Rick O’Bey, one of the original Deacons band members, was tracked down. He had wax records of all the original songs but one. Robinette- Petrachi supervised reconstruction of the final song from the optical track.

Someone queried Robinette why he’d asked Zsigmond to shoot Summer Children, and the producer said they had wanted the “new wave film” look that was sweeping Europe.

“I saw some commercials with that look,” he said. “They were produced by FilmFair, in Los Angeles. Someone there introduced me to Vilmos who shot those commercials.”

Zsigmond, who arrived in the United States as a political refugee from Hungary in early 1957, initially supported himself by working at odd jobs. Those included processing microfilm at a lab and going door-to-door to take children’s portraits. He shot a series of ultra-low budget films that included Rat Fink, The Sadist and The Nasty Rabbit. Gus Jekel at FilmFair liked what he saw, and brought Zsigmond in to shoot commercials.

“Jack contacted me and said he wanted to make a film that looked and felt realistic, like the movies that were being made in Europe,” Zsigmond told the audience. “I admired the French and Italian new wave movies that I saw when I was a student in Hungary. I was happy to have an opportunity to shoot a film in that style.”

The DP also lauded the support of his gaffers, Ernie Reed and Leslie Kovacs (aka Laszlo Kovacs, ASC). “Ernie was a terrific gaffer,” he said. “We had worked together on many commercials, and Laszlo knew what I wanted without me having to say a word.”

Zsigmond had Kodak Plus-X and Double X motion picture films on his palette, respectively rated for exposure indexes of 50 and 250 in daylight. He covered scenes with a single ARRI 2C camera, including the opening, shot on the marina in Los Angeles where the main characters are preparing to sail to Catalina Island on a yacht owned by one of their fathers. It was a 113-foot long schooner with three masts.

“I had never been in anything larger than a rowboat before,” Zsigmond reminisced.

He had an 18mm lens mounted on the camera as the characters began their journey, and used filters that he brought with him from Hungary to compensate for the bright sunlight painting the blue sky. Sunlight hit the rigging and cast moving shadows on the deck, and sometimes on characters, as the boat rocked on the waves.

“Shooting in natural light was interesting,” Zsigmond remembered. “I could feel the boat rocking on the waves and see the wind blowing through people’s hair. The key light came from the sun, and we found ways to use fill light when and where it was needed.”

He estimated that about 90 percent of the scenes were daylight exteriors, and tried to film during the early morning or the late afternoon, when the sun wasn’t overhead. They occasionally used reflectors, including for scenes shot on the beach, to bounce sunlight to where it was needed for proper exposure and to visually punctuate moods.

Robinette recalls watching Zsigmond climb to the top of the 50-foot high mast and shoot a scene looking down on the characters on the boat.

“We shot with wide angle lenses and kept everything in focus,” Zsigmond explained.

The people of Avalon are also a part of Summer Children’s story.

One day Zsigmond and Bruno saw a woman playing an accordion while she walked down a road in Avalon. She was followed by a group of singing kids, and a few dogs. Bruno had a couple of main characters join the parade.

Among the many other memorable scenes is one Zsigmond shot from the back seat of a car with the handheld camera and zoom lens. Audiences see the back of the driver’s head and his eyes in the mirror along with the changing view through the front window. Another compelling scene was filmed in a store with two of the characters talking with the owner. [The manager of the Deacons was recruited to play the storeowner.]

“I was lucky we were shooting on film, because even today’s best digital cameras wouldn’t have handled the difference in exterior light seen through the window and darker corners of the store,” Zsigmond emphasized.” As the mood darkened, we shot more scenes in shaded areas.”

A dance scene on the island was staged in a gymnasium decorated with an array of colorful balloons because there wasn’t a sufficient budget for renting a dance hall. They assembled a crowd for that scene by asking friends to bring their friends.

Chris Chomyn, Jim Chressanthis, ASC, and Yuri Neyman, ASC, were among the cinematographers and other filmmakers in the Egyptian’s audience that night.

“It looked beautiful,” Chomyn effused. “There are rich, inky black tones, cool, shimmering whites and a full range of grays in-between. The film retained the integrity of the original look, like a time capsule containing a story that happened during the summer of 1964. Independent films shot in one of today’s digital formats run the risk of not being continually updated to new storage media and formats. In the case of Summer Children, we would have lost part of our culture, our history, identity and memory.”

“Summer Children is like a blend of films directed by Antonioni, Bergman and Fellini,” Chressanthis said. “The images are magic. They almost tell the story without dialogue. It’s a window on what life was like in 1964 in this part of the world. It’s visual poetry. I just wrote a letter to Jack and Edie thanking them for restoring and preserving this film for posterity.”

“Seeing Summer Children helps you understand the essence and depth of Vilmos’ talent in the purest form,” Neyman added. “He used composition, contrast, light and shadow to transport audiences to the time and place where this story was happening. Seeing this film and hearing the subsequent discussion with Vilmos was an inspiring experience. It is a work of art!”

Robinette and his cousin have also collaborated on the production of a DVD. The content includes a conversation between Robinette and Zsigmond titled: Silhouettes in Shadow and Light. On that disc, Zsigmond shares memories of his early years in Hungary and how those and other experiences influenced his approach to photographing Summer Children and subsequent films in his extraordinary body of work. That short list, of course, includes Close Encounters of the Third Kind, The Deer Hunter, The River, The Black Dahlia, Deliverance and McCabe and Mrs. Miller.

Zsigmond’s latest film Bolden! is slated for release in 2011. Summer Children, which had its world premiere at the 2011 Slamdance Film Festival, is available for sale on DVD through the Robinette Productions website at www.summerchildren.com.