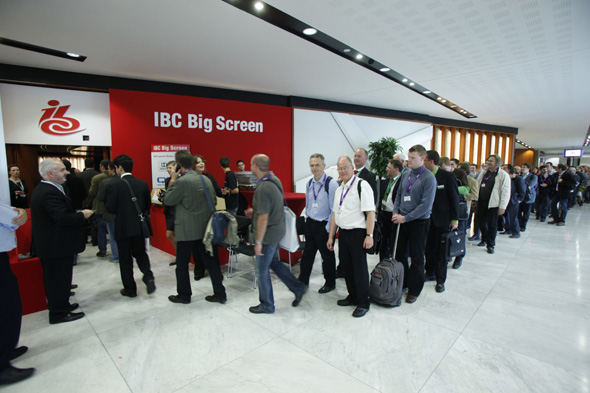 Through a lens (really) clearly…

An estimated 45,000 attendees visited Amsterdam for the 2009 International Broadcast Convention, Europe’s equivalent to NAB, and it’s likely the majority of those present donned 3D glasses at some point during the event.

The mood at the RAI Convention Center during the weeklong event was decidedly upbeat, with many attendees viewing 3D content, ever-present on the exhibition floor and in conference session, as a major growth driver in the coming year. One session featured David Hancock of Screenvision predicting that more than half of the 3D features in production in 2010 would be live action. Hancock also said that only 60 percent of 3D titles would be generated from the major Hollywood studios, signaling the format’s attraction to independents.

As for IBC’s home market, UK broadcaster Sky is in the process of getting 3D production gear, including 3D cameras and editing equipment, in place for its high-profile planned 3D TV channel launch in 2010. “In the U.S. they are focused on the theaters, in Europe, they are 100 percent serious about 3D in homes,” observed Element Technica’s Jay Romero. To whit, the L.A.-based firm showed its new stereo 3D rig, which supports a variety of digital cinema cameras and is available for rental at Keslow Camera in Los Angeles and Off Hollywood in New York, with rentals at Panavision UK on the near horizon. Romero added that after Element Technica garners customer feedback and implements upgrades, the 3D rigs will be made available for purchase, likely in the $80,000-$90,000 range for a turnkey system. He said his firm intends to build additional, more lightweight rigs in order to support a wider range of cameras.

Munich-headquartered P+S Technik was one of the first to market with 3D production gear, with its mirror (beam splitter) rig, and at IBC, the firm demonstrated continuing 3D support with three new rigs. They include development of a lighter mirror rig that is designed for Steadicam or handheld work, as well the development of a side-by-side rig. The Munich based firm also showed a new line of prime lenses dubbed the 16Digital lens set, designed for digital cameras with a single 16:9 format 2/3” CMOS sensor  (including the SI-2K camera for 2D or 3D stereo recording) and equipped with the P+S Technik Interchangeable Mount System. Optical parts are designed with support from lens manufacturer Linos Photonics. The prototype optics were used on My Bloody Valentine 3D, released theatrically in the U.S. last January and now available on DVD.

All Around The Floor

The density of new 3D capable products was even more pronounced on the post side, including Assimilate’s Scratch, Avid’s Media Composer, Autodesk’s Lustre, DVS Clipster, The Foundry’s Nuke and Ocula, Iridas’ SpeedGrade, and Quantel’s Pablo.

“The 3D footprint at IBC is probably five times what it was in past years,” said Duncan Humphreys, creative director at UK-based CAN Communicate, which recently created a 3D short about world recorder holding sprinter Usain Bolt. Screenings at IBC, like Fox’s Ice Age: Dawn of the Dinosaurs and Dreamworks Animation’s Monsters vs. Aliens, also underscored the boom in 3D production.

In other parts of the IBC universe, ARRI announced its development of three 35-mm format digital cameras designed around a new CMOS sensor. Code-named Alexa, the camera line is expected to start around €50,000 (roughly $73,500). Compact and lightweight, the new rigs will target TV, commercial and feature film production.

The three cameras include the basic EV (electronic viewfinder), EV+, and OV (optical viewfinder), with the entry-level models, EV and EV+, employing a 16:9 sensor. The OV offers a 4:3 sensor and a rotating mirror shutter linked to an optical viewfinder. ARRI reported that this new generation of digital cameras was developed in close communication with industry insiders applying the experience gained with the company’s popular D-21. (D-21 owners will have first options on the new cameras, which are slated to ship during the second quarter of 2010, with upgrade packages and migration paths.)

News from Arri Lighting included a new line of True Blue Daylight lampheads, which are HMI Fresnel units comprising of 575W, 1200W, 2500W and 4000W HMI lamps. These fixtures have lower weight than their predecessors.

California-based AJA Video Systems used IBC as a platform to release its anticipated Ki Pro portable tapeless video device. First announced at NAB ‘09, the system records files to the Apple 10-bit ProRes 422 codec directly from camera, which is then immediately available to edit within Apple’s Final Cut Studio. The Ki Pro system incorporates a removable storage module and lists for $3995.

AJA also unveiled the first products in its new Kumo line of routers, which offer SDI, HD-SDI and 3G SDI compatibility, as well as web-browser control over a LAN (local area network). They are designed for broadcast, post and mobile OB vans. Kumo 1604 supports 16 SDI inputs and four out, and Kumo 1616 supports 16 channels in and out.

AJA reported that with embedded Linux, the routers support HTTP and SNMP control while an internal web server allows operation via a web-browser. Expected to ship this winter, Kumo 1604 lists for $1995 and Kumo 1616, $2995.

3D, as well as file based workflow, collaboration and digital camera support, were among the key themes across the postproduction exhibition area.

DVS’s popular Clipster postproduction system – used at many Hollywood post houses – now supports the Arriflex D-21 by enabling real-time decoding and debayering of the Arriraw data in 2K quality.  Arriraw material from the D-21 camera can be directly displayed, edited and played out in Clipster’s timeline. The DVS system also supports Red and the Phantom digital cameras; support for additional digital camera systems is planned.

Euphonix, well known for its digital audio consoles, introduced MC Color, a new color grading surface that supports Apple’s Color 1.5 by attaching to the Mac via Ethernet. The launch turned heads, as it is Euphonix’s first product in the color grading space. Its makers suggest that the portable technology can be used for on-set grading.

Quantel previewed its “virtualisation” concept for eliminating latency and version control issues in file-based workflows. Final Cut Pro Gateway, a new module for the Quantel sQ broadcast servers, will be the first of the Quantel products to offer the technology. In addition, Quantel’s Pablo, one of the early post systems to support 3D, now has software that includes the ability to build and modify 3D LUTs, along with RED conform from an Avid.

Autodesk showed new versions of Sofimage, the 3D software that it acquired from Avid in late 2008; and Lustre, its color grading system, which now includes tools for stereoscopic 3D productions, while the U.K.-based The Foundry demonstrated RollingShutter, a new product available on After Effects and Nuke that is designed to offer a fix for CMOS chip rolling shutter problems. RollingShutter would essentially compensate for skewing in a scene, in order to improve the image as well as to enable trackers to work on affected footage. The Foundry also showed version 6 of its Nuke compositing software and new compositing application NukeX at IBC. It released Ocula2 for stereoscopic applications.

U.K.-headquartered Cintel demonstrated working models of its Ditto Evolution, a modular film scanning system; and ImageMill2, an image processing platform that includes network capabilities and data file management. Also, the company reported that it intends to ship its previously announced Grace noise and film grain management tool with its Steady image stabilization application by the end of the year.

Finally, Munich-headquartered Cinegy demoed its Workflow media asset management and archival system. New features include Cinegy Cinebridge, developed to allow any element inside the Cinegy media archive to be immediately used by any application or tool that understands AVI files.

With its focus on these newer products, Blackmagic has discontinued marketing and further development of the Da Vinci 2k colour grading system, first launched in 1999. Blackmagic said that current costumers would continue to receive support and spare parts for the system.

Other buzz around the hall included Avid Technology’s acquisition of MaxT Systems, which quietly occurred a month before the convention. Of particular interest to Avid was MaxT’s cloud-based editing environment based on its MAXedit Server Edition, which is a multi-user, browser-based HD/SD editing system. MaxT was developing a workflow to enable local and remote native format editing of centrally ingested material.

In Amsterdam, Avid showcased version 2.0 of Interplay, aimed at extending WAN access to media assets. Avid’s editing line – Media Composer/Symphony 4.0 and NewsCutter 8.0 – gains a new mix and match feature, for use when working with multiple frame rates and resolutions in the same timeline. The new version of Media Composer includes stereoscopic tools.

With attendance down only an estimated seven percent despite the challenging economy, IBC clearly wrapped on a high note, with organizers confirming that Europe’s largest technologically-driven trade show will remain in Amsterdam through 2012.