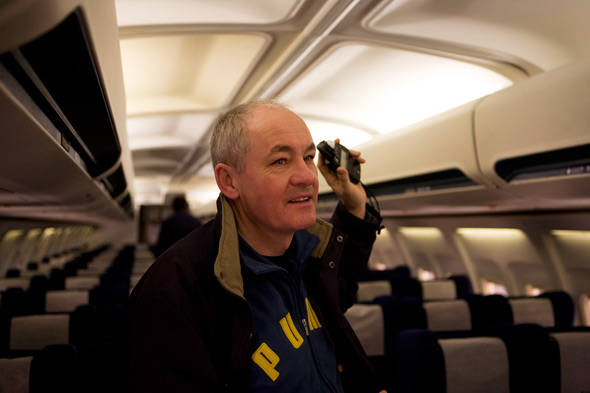 For the first time in the 82-year history of the Academy Awards, the five nominees for cinematography each hail from five different countries, proving, in case there was any doubt, that filmmaking is truly the most global of media arts.

The films besides each DP’s credit range in genre from pure fantasy to hard-edged realism, with budgets from modestly funded independent features to a several hundred million dollar studio blockbuster.

In the opinions of members of their peer group in the Academy of Motion Picture Arts and Sciences, the five nominees, Barry Ackroyd, BSC, Christian Berger, AAC, Bruno Delbonnel, ASC, AFC, Mauro Fiore, ASC and Robert Richardson, ASC have set the contemporary standard for artful cinematography. To put their accomplishments into perspective, consider the odds of being nominated in a field that not only includes many of the world’s most talented visual storytellers, but for the first time ever, double the amount of nominees in the Best Picture category, from which to choose.

Two of the selected shooters have travelled down this road before, many times before actually: this is the sixth nomination for Richardson, who took top honors for JFK in 1992 and The Aviator in 2005. His other nominations were for Platoon in 1987, Born on the Fourth of July in 1990 and Snow Falling on Cedars in 2000. It’s the third nomination for Delbonnel following in the wake of Amélie in 2003 and A Very Long Engagement in 2005. For Ackroyd, Berger and Fiore, the nomination is a first.

So here’s to the United Nations of Oscar – may their flags ever wave.

Ackroyd was born and raised in Manchester, England. He enrolled at an art school with the intention of studying sculpting and making the fine art form his life’s work. His attention and major field of study shifted to cinematography after he saw Kes, which was directed by Ken Loach and shot by Chris Menges, ASC, BSC.

Starting as an assistant cameraman on documentary crews, Ackroyd traveled the world to cover a wide range of subjects. One of his first cinematography credits was for The View from the Windmill, a documentary directed by Loach. He shot countless non-fiction projects before moving into narrative filmmaking. A dozen of his 50 credits have been collaborations with Loach, including Riff-Raff, The Navigators and My Name is Joe. Ackroyd’s other credits include United 93, which earned an Oscar nomination for director Paul Greengrass.

The Hurt Locker was his first collaboration with director Kathryn Bigelow. The film tracks a U.S. Army bomb disposal unit in the heat of war in Iraq. Conflict arrives in the form of a brash young sergeant who thrives on the thrill of danger. The rest of the unit is concentrating on doing their duty and surviving the final month of their current tour.

“I’ve made a number of documentary films with soldiers,” says Ackroyd. “What you are looking for in all these people is their humanity. In my first conversation with Kathryn, we discussed the humanity of the soldiers, followed by the goal of making things believable and real for the audience. We’re trying to show that these characters have human feelings and interests and lives, and that they have to interact in dangerous situations, and make decisions that people should never have to make.”

Ackroyd insists that finding something that audiences can identify with is the approach he’s taken in every film he’s ever shot. To whit, Bigelow embraced the DP’s suggestion to produce The Hurt Locker in Super 16 format, using a mobile camera to create a realistic look. The critically acclaimed indie war drama has earned nine Oscar nominations, including one for best picture and best director.

Berger was born in Innsbruck, Austria, where he was raised in an artistic household. His father was a painter and his mother was a dancer. Inspired by the French New Wave films of Jean Luc Godard and Francois Truffaut, the aspiring filmmaker purchased a 16 mm Bolex camera, and was soon shooting news film for television all over Europe. He organized a small company that produced short films and documentaries; one of the films he made between news assignments was well received at Cannes and led to his association with director Michael Haneke.

The White Ribbon is Berger’s fifth narrative collaboration with Haneke. The story takes place in an agrarian village in Northern Germany several years before the beginning of World War I, and depicts inexplicable and brutal events that seem to implicate the abused and suppressed children of the village. The town’s schoolteacher ponders whether the events contained the germs of the tragedies that followed, and the connection between the barbaric acts and the lessons taught to the children.

“We felt strongly that color images would not feel right for the period,” Berger says. “Also, black-and-white film has the power of abstraction. But we decided not to imitate the style of black-and-white films made during the early days of the industry, to avoid a feeling of nostalgia. Our goal was to create the clearest and crispest black-and-white tones possible. After testing, I decided that today’s 35 mm color negative film, combined with a 4K DI, gave us crisp images and rich contrast.”

Delbonnel was born in Nancy, France. His family moved to Paris when he was 10 years old. He was interested in painting and wanted to go to art school, even though his father always imagined his son going into law. Delbonnel’s parents bought him a Kodak Instamatic camera when he was 15 years old. He took pictures of the Eiffel Tower, other architectural landmarks and landscapes. His interest in the cinema was sparked by films directed by Federico Fellini and Ingmar Bergman, as well as The Godfather, shot by Gordon Willis, ASC, and Scarecrow, photographed by Vilmos Zsigmond, ASC.

When he was 18, Delbonnel wrote a script for a short film, and got a government grant to produce it. Legendary cinematographer Henri Alekan, AFC read his script and agreed to shoot the project. It was while watching Alekan render his script onto film, that Delbonnel was inspired to pursue cinematography. In 1980, he moved to New York City, where he met and was mentored by Nestor Almendros, ASC.

Within six months, Delbonnel returned to Europe and began his career as an assistant cameraman on commercials shot by Douglas Slocombe, BSC, Gerry Fischer, BSC and other cinematographers. His Oscar nomination for Harry Potter and the Half-Blood Prince, directed by Peter Yates, continues the story of the boy wizard as he finds a mysterious tome marked property of the titular prince. With the help of the book, Harry does well in potions class, and eventually takes lessons from Dumbledore to discover the single weakness of his nemesis Voldemort.

“I wanted to give the images a very dark mood, in tune with the subtext of the story,” recalls Delbonnel. “But the huge sets still required an incredible amount of light. I prefer to stay with wide lenses, but the large sets sometimes seemed to overwhelm the characters. So with my fantastic grader, Peter Doyle, we developed software tools to control depth of field using selective blurring. We stayed with a color palette that tended to gray. We tested a number of digital cameras, but the image quality was not as good as film.”

Fiore was born in Marzi, a town in southern Italy with a population of 1,500. His family moved to Chicago seeking broader opportunities when he was 7 years old. Fiore brought a passion for playing soccer to his new homeland. He says the sport taught him the value of teamwork, and that victory belongs to the last person standing. He was also an avid still photographer in high school. His specialty was abstract images.

The music videos Fiore saw on television as a teenager sparked his interest in cinematography, and he went on to study filmmaking at Columbia College in Chicago, later continuing his education at the American Film Institute (AFI). The DP began his career as a key grip for his classmate Janusz Kaminski on a Roger Corman movie. Fiore was the gaffer on the crew when Kaminski earned an Oscar for shooting Schindler’s List. Fiore got calls to shoot independent films and earned his first credit in 1993 for Drag.

The box office record breaker Avatar takes the audience on a 3D journey to a planet called Pandora with Jake, a paraplegic war veteran on a mission to earn the trust of the native race. Jake is supposed to betray the local populace when a private army invades the planet in a quest to steal its valuable natural resources. But, instead, he falls in love with a Pandorian native, and leads the planet’s resistance in an epic battle for survival.

“Jim Cameron saw Tears of the Sun, a film I shot on location in Hawaii that was supposed to be a jungle in Africa,” Fiore says. “It was the look he envisioned for the jungle on Pandora. The majority of Avatar was produced with motion control and CGI technologies, but Jim wanted live-action scenes with actors to have an organic look and lifelike feeling that isn’t crisp and pristine like something that came out of a computer.”

Richardson is a native of Cape Cod, Massachusetts, and spent his youth in that state. He got hooked on movies while he was a student at Vermont University, where he became enthralled with the films of Swedish director Ingmar Bergman and his long-time cinematographer, Sven Nykvist, ASC. After taking every film class that the school had to offer, Richardson transferred to the Rhode Island School of Design, where he majored in filmmaking.

The budding shooter continued his studies at AFI where George Folsey, ASC, Nestor Almendros, ASC and Nykvist were high on his short list of mentors. After graduation, Richardson began his career shooting documentaries, including one in El Salvador in the midst of that nation’s civil war. The subsequent documentary caught the attention of a young director named Oliver Stone, and the pair’s first co-venture was the gritty, political narrative Salvador.

Richardson’s third teaming with writer/director Quentin Tarantino, Inglourious Basterds, opens in France in 1941 with a Nazi officer relentlessly tracking down and murdering Jewish civilians. Three years later, the tide is turning, and a band of Jewish-American commandos parachutes into France and begins wreaking havoc that contributes to the destruction of the Nazi war machine. A revisionist version of history the likes of which cinema has never seen, Inglourious Basterds culminates in an unforgettable scene inside a Paris movie theater where Hitler and other members of the Nazi hierarchy have assembled to see a propaganda film. Instead, they are in for the surprise of their lives.

“Our aesthetic approach was determined by the script Quentin wrote,” Richardson says. “We both envisioned the story in 35 mm anamorphic format. For inspiration, we watched a number of French New Wave and spaghetti Western movies. Our discussions about those films helped to determine how we shot the beginning and the middle of Inglourious Basterds. We agreed that the final chapter of the film called for a look emulating the Technicolor three-strip dye transfer process.”

By Bob Fisher and David Heuring