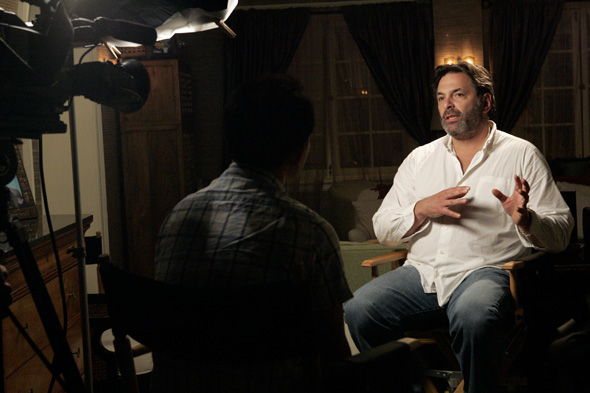 Ken Olin is a Chicago native who initially made a splash as an actor during the early 1980s with roles on Hill Street Blues and Falcon Crest. He later earned a Golden Globe nomination for his role as Michael Steadman on the groundbreaking series thirtysomething. Olin occasionally directed thirtysomething, and that eventually led to directing such shows as Judging Amy, Felicity and The West Wing. Olin went on to executive produce and direct over 20 episodes of Alias, earning a 2004 PGA nomination. Olin is now executive producing, directing and portraying a recurring character on the ABC drama Brothers & Sisters, and he sat down to talk with ICG about series television, his collaborations with his DPs, and the aesthetic film brings to the show.

ICG: Brothers & Sisters DP Cynthia Pusheck described your approach as more restrained and classic, in order to keep the focus on the performances. Ken Olin: Yes. One thing that is really important to me is that the pace of the show is created editorially, as opposed to the camera whipping around. The kinds of camera moves I prefer are more emotional. It was different with Alias. With this show we tend to do more classical kinds of masters or coverage, and we do a lot of long lens work. When you’re trying to create a more elegant and emotional feel, I think film is probably more conducive to that. There’s warmth to it.

In some scenes, you seem to forgo classic establishing or master shots. What’s the thinking there? I think sometimes that is just a matter of storytelling. I don’t find that those kinds of lenses are necessarily suited that well to a dining room, for example. That just feels artificial to me. At other times, if we are in a circumstance that warrants it, we will do them, but I like to use staging more to give you a sense of where people are.

What caught your eye about Cynthia’s work when you brought her onto the show? She is extraordinary! Tom Yatsko had worked with her and loved her. The thing I love about Cynthia is that she is very, very invested in the storytelling. As much as that comes from performance, it also comes from composition and staging. She is always trying to achieve a balance between the scheduling pressures that you feel on network television and creating an elegant and beautiful world. Cynthia is uncompromising as long as she can afford to be uncompromising. And it’s quite amazing, over the course of 9 or 10 months, to have somebody like that to collaborate with, because she maintains a very high standard. As you know, it’s rare to work with a woman cinematographer. She is extremely commanding while maintaining her femininity. The crew loves her. They are an experienced crew, with no small percentage of men, who deeply respect her. Cynthia brings a feminine touch to her work that is appropriate for the show, but she’s also very commanding and authoritative. She enjoys dynamic shooting and storytelling. I love working with her.

I understand that the pilot for Brothers & Sisters was originally shot using a high-end digital camera, and then reshot on film. What’s the back story? This was four years ago, and digital was a relatively new format, especially for what we were trying to do. The cinematographer was Tom Yatsko, who went on to shoot the first season of the show on 35 mm film. I think we weren’t prepared for the amount of support that was necessary in order to get images rendered the way we wanted them to look. It was also an extremely cumbersome endeavor compared to what we had been used to on Alias. I was used to being able to move relatively quickly. But when you’ve got to pick up all the different monitors and the systems, and get them to a different place in order to be able to move forward – that was challenging, and not something I particularly liked.

It was my inexperience with the medium as well. There were certain issues in terms of the camera operators’ ability to actually see well. That was troubling, because I am very dependent on the camera operator as well as the cinematographer. In the end, there was warmth and texture missing. That was unsettling. People can talk about grain or whatever, but I think it’s just a kind of richness that people are used to that isn’t there the same way. I’m sure more progress has been made since then, but I do think it’s tough when you’re photographing actresses that are not in their 20s. There is a kind of crispness or sharpness that’s harsh compared to film. It was important to me that we protect the actresses. Even when the camera pans, there is a slight, almost imperceptible blurriness that makes it feel more real on film. It’s probably only more real in the sense that it’s more like the way we are used to experiencing watching film.

Are there cinematographers you have worked with in the past who have impacted the way you think about cinematography as a producer and a director? It was wonderful working with Ken Zunder (ASC), who was an operator on thirtysomething and then moved up to cinematographer. I also loved working with Michael Bonvillain (ASC). He is a terrific cameraman and very dynamic. Working with him on Alias was very different from a lot of the work I had done before. I worked with Hiro Narita (ASC) a long time ago. Hiro was fabulous for me to work with because I come from television, and he’s a classical cinematographer who has a very Japanese sense of composition. When I wanted to move or swing the camera around, he would constantly ask me, ‘Why?’ He was always trying to find the best style to suit the material, as opposed to imposing something. I think it’s probably lightened up a bit, but at one time there was so much pressure in television to be visually interesting and to compete with movies. Hiro said, ‘Yeah, we can do all that stuff, but it doesn’t really help tell the story.’ So he was very significant to me. Tom Yatsko was also fabulous. He was so much fun to work with and I was learning how to work in a loose fashion, in a very fast way, while maintaining an uncompromising seriousness about the storytelling.

What’s your take on the state of television cinematography today? The standard for cinematography — the bar — is so high in television. I’ve done this for so long now. I see cinematographers in television who always attain a certain standard visually, and yet, they are doing it so quickly. It’s a testament to how much skill they have. It’s an extraordinary laboratory for young cinematographers as well. Take Cynthia, who has come up pretty quickly. You look at all the different things that are on her plate – having to make three women look beautiful at the same time, while achieving a different kind of scope and beauty on the canvas, and yet we are filming five pages a day. Someone like that, who can balance her high standards with the economic exigencies, is pretty fantastic.