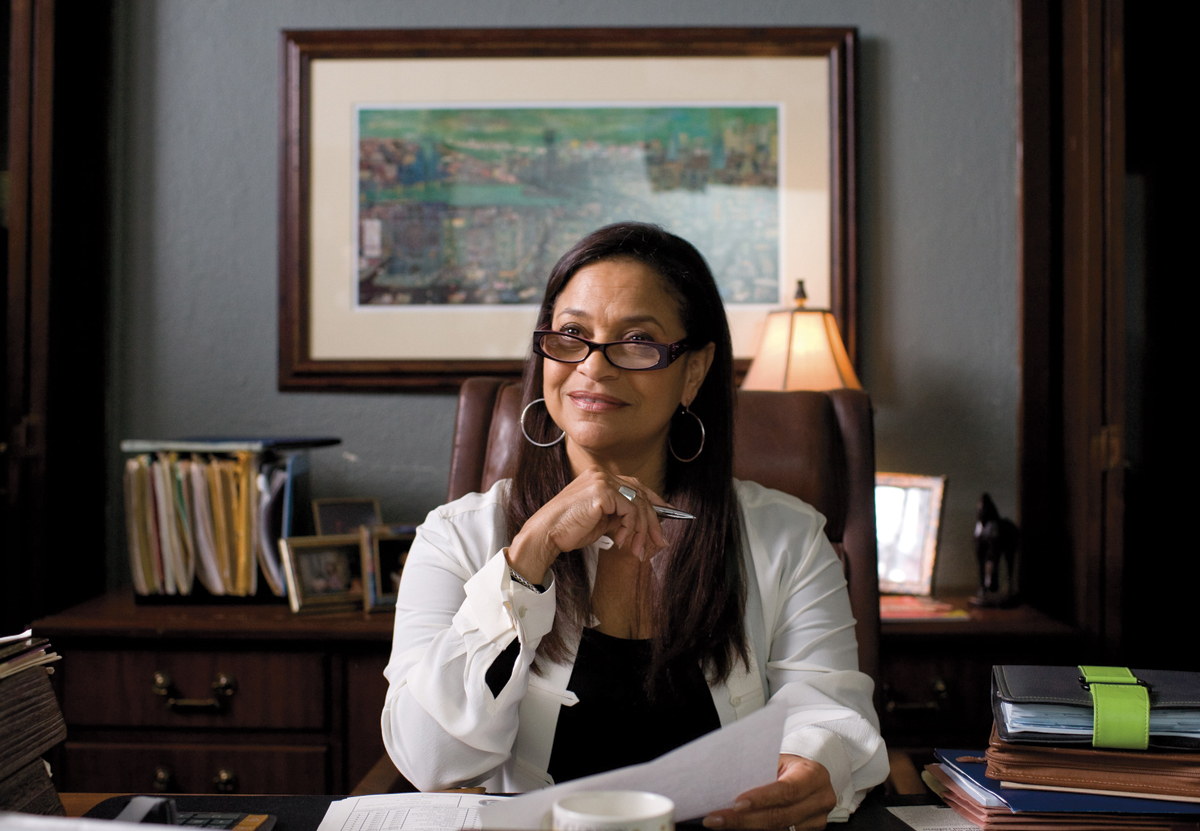 Fans of the old television series Fame will never forget hearing: “You want fame? Well, fame costs. And right here is where you start paying in sweat,” from a tough-as-nails teacher whose compassion and sense of purpose was matched only by her drive. It’s been well over 20 years since Lydia Grant, aka Debbie Allen, said those words; and two decades later, Lydia’s passion and drive haven’t dissipated at all. In fact, as cinematographer Mark Doering-Powell (Everybody Loves Chris) says, producer, director, choreographer, teacher Debbie Allen is a lot like her character. “Especially when she’s working with young people. When she’s directing, she’s fast, fun, and moves the camera. She has unbelievable energy and an infectious laugh.”
Allen, who broke onto the scene with Fame, is living the dream those students fantasized. She’s received three Emmy Awards honoring her choreography, and two Emmys and one Golden Globe for her role as Lydia Grant. She’s appeared in, choreographed, directed or produced hundreds of television and stage projects, from award winning sitcoms and television movies, like the second highest rated original movie in Lifetime Cannel history, Life is Not a Fairytale: The Fantasia Barrino Story, to staged musicals at the famed Kennedy Center.

When her daughter returned from studying at the Kirov Ballet, Allen realized there was nowhere for Vivian to continue her dance education. “Are you waiting for permission?” Amistad production designer Rick Carter asked. “Jump off the ledge and open your own school.” Today, Debbie Allen’s Dance Academy (DADA) provides a venue for young dancers to study with instructors from the Kirov, Bolshoi and Alvin Ailey American Dance Theatre. What about Lydia Grant, you ask? Well, fans can see her on the big-screen this month in MGM’s feature updating of Fame, albeit with a new incarnation of Lydia Grant – the school’s tough but caring Principal Simms.

ICG: How did you come to be involved with the first Fame movie in 1980? Debbie Allen: I was a Broadway starlet. I had danced in West Side Story on Broadway and had been in shows like Raisin and Ain’t Misbehavin’. When I was contacted for Fame, I was supposed to be the nemesis for Coco. Instead, I played a young dance teacher’s assistant. One of my lines was ‘what did you call that – wicked?’ while watching Gene Anthony Ray. There are no small parts, honey. One word might take you the distance!

[Laughing] What was it like working with director Alan Parker? We never knew when he was shooting! We did have a feeling that this was going to be something fresh and raw. I already knew Irene Cara would make it, and my peers knew it was powerful. But it became a delightful surprise, and was the first movie where the soundtrack went so far beyond the movie.

What dance movies have inspired you? The Red Shoes, and An American in Paris, which featured a 15-minute dance number! White Knights was amazing; I watched it over and over to count the turns. You also have to look at Carmen Jones, with that beautiful black lush culture, amazing dancing and singing. Alvin Ailey was in that movie! These days we have a plethora of dance movies, almost like circus performers, and the language of dance has changed. That’s one of the important things I teach at DADA (Debbie Allen’s Dance Academy), where we blend ballet, modern and Cirque Du Soliel moves.

The television series Fame [1982] was a major move in your career. How did that come about? It was shortly after the film had come out, and I was asked to play a dance teacher and I said, “I’ll be fine – as long as I can do the choreography.” Choreography was everything to me, and I ended up being the artistic director for all those years on the show.

So was your next natural step directing? [Laughs] The first day on the job [as a director], there was this moment of ‘what am I going to wear? What should I look like? Should I go more manly?’ I didn’t have breasts then, and I ended up in my usual overalls! The crew had been excited about working with me as a choreographer. And, when directors that didn’t understand dance came in, I would work with them. So, I knew things like what walls were wild. My first day, we wrapped an hour early and I hung with the fellas. It was like going to film school. Having danced in front of the camera, paying attention to what the camera was doing, watching the choreography in editing, how the editors would cut on the up beat, all prepared me.

What was your relationship with Director of Photography Bill Spencer like? Bill had been a camera operator on all the MGM musicals. He took me into the editing bay; I was raw and fresh and didn’t have any clue of how to do this, so I wrote out notes. I wrote the music, the choreography, and designed the camera shots for every production. Bill was so funny. I would use the viewfinder and learn how to square my eyes. I remember asking him why he didn’t come to dailies. ‘It looks like what we just shot yesterday,’ he would say to me. ‘Why see it again?’ There was no video assist back then, so I learned how to get behind the camera, handle the wheels, look at the frame and then trust the operator to get it right. If he said, ‘Debbie, I need one more, okay?’ we did one more. It was a different process back then because everyone wasn’t watching playback. I learned by being right next to the lens.

Who are some other DPs that you have worked with? I didn’t work with him directly, because I was one of the producers, but what Janusz Kaminski, ASC did on Amistad was amazing. Isidore Mankofsky’s work on Polly: Comin’ Home and Stompin’ at the Savoy was incredible. I could do wild and wonderful things on Everybody Hates Chris with Mark Doering-Powell. Mark and I play like kids, doing ‘sword fights’ and the like. Mark is strong, fun and brilliant to work with. John Simmons (All of Us) was also tremendous. And Don A. Morgan ASC (A Different World, Girlfriends) can do anything. Don really understands lighting and making people look good.

How has your background as a choreographer impacted your directing? Well, how you use the camera, how you move it, is choreography for me. Some young directors will roll on everything. But I like to get into the space and see how it will look on the screen. The choreography and movement of the camera in television is what we do with the lighting on a theatrical stage, because the camera is an intimate instrument. I learned a lot from George Lucas and his choreography of the camera. Every shot is a close up, even if it is the City of New York. Every frame must say something.

You are co-starring in this new version of Fame and your career as an actor has been so impressive. Is there a difference between the actor/cinematographer, choreographer/cinematographer, and director/cinematographer relationship? With the cinematographer and the actor it’s, ‘if you did this a little bit, it would be better for us.’ That’s how a cinematographer relates to an actor. With choreography and directing, you have to plan it out. You can’t go in the day of and plan for the dance. We have to know that I’ll need a Titan crane for this shot, a Steadicam for that. That I am going to dance in one shot with the Steadicam. I remember one shot in Polly: Comin’ Home where there were mirrors all over the room. Isidore Mankofsky had to light it from the outside. I didn’t tell him how to do this, it was ‘this is what I want, honey, you figure it out….’.

You recently realized your long-held dream of bringing an all-black cast to Broadway for Cat on a Hot Tin Roof. How does stage differ from films or TV? Stage is always proscenium, it’s a concise space where movies are 360 and up and down. Probably the only stage production hit that defies the proscenium is KA in Vegas, Cirque Du Soliel. There you get an aerial view of a battle. Film and TV actors like me because in the theater you have to examine questions. When we were rehearsing Cat on a Hot Tin Roof, we were talking about ‘why do you dress like this, why do you talk about this, who am I in the room?’ You can’t step onto a space on the stage until you explore all these circumstances. It should be the same way when you are working in film. There is just another layer.

How do you think the industry has changed over the years? Technology has changed things. It used to be three stations and PBS. Now there are hundreds of channels, and people are watching television on an iPod and computer when they want, not when it comes on. When Michael Jackson died, everyone in the world knew in a matter of minutes. There are no record stores any more. You can’t say ‘we sold a million albums’ because people are buying individual songs on the Internet. Some people don’t see all this change as a good thing, but one definite positive has been the increase in opportunities because of the proliferation of different kinds of productions. Reality shows allow everyone to get on television, and there is certainly a burgeoning class of writer/directors who can now deal with edgier topics. Making A Different World, we did the first TV show about AIDS, but we couldn’t show a condom! Back then you couldn’t say ‘ass’ or ‘bitch’. Sometimes I wonder if we’re now too desensitized, given how far things have gone in the other direction. I still like watching movies on the big screen with an audience and my popcorn, but even that seems to have changed!

Speaking of movie theatres and popcorn: Have you seen this new big-screen Fame? Not yet. But I really enjoyed being a part of this production. It was important to the producers to have someone of the face of Fame in the new movie. So I was thrilled when Marguerite, I used to call her ‘Sunbeam’ when I took her with me everywhere, became the choreographer. I started becoming involved when the casting director called to find talent. I sent over a lot of kids. Then, when they asked me to play the principal, I didn’t hesitate. I was thrilled to play ‘Mrs. Sims’ aka ‘Lydia Grant’. I hope it engages today’s audiences. I hope the dance lives up to our expectations. But dance isn’t the only thing that Fame is about. It’s also about people taking hold of their lives. Of course, child, I need to see the movie, so we can talk about if I got that right!