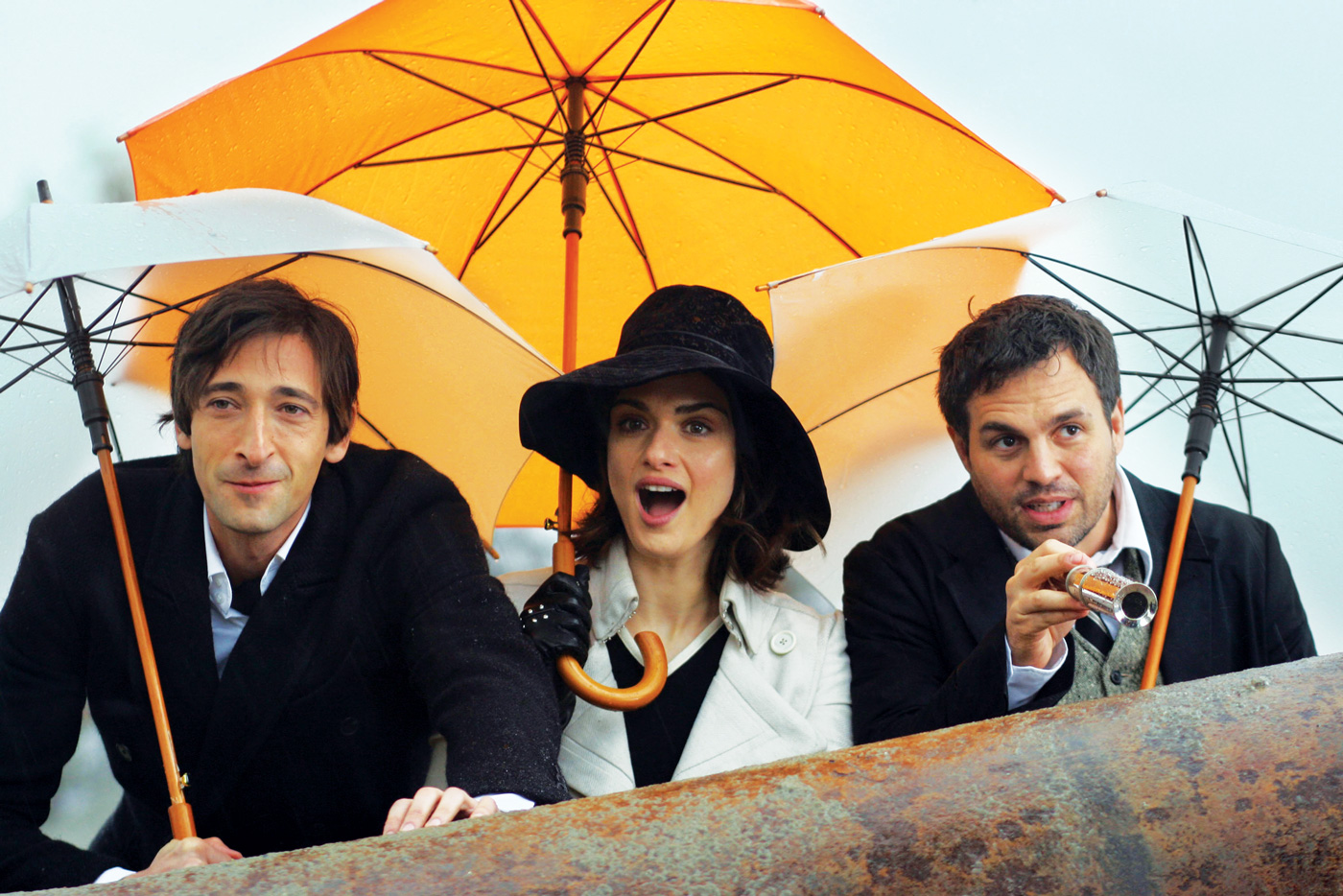 A Most Excellent Adventure

Sundance filmmaker Rian Johnson, whose $500,000 indie debut feature Brick won a Special Jury Prize in Park City in 2005, struck while the iron was hot: His follow-up, The Brothers Bloom, about a pair of swindling siblings, retains that “indie feeling” despite being a more ambitious effort in all facets of its moviemaking. Johnson’s own script for The Brothers Bloom centers on two successful con men, Bloom (Adrien Brody) and Stephen (Mark Ruffalo), who have perfected the art and craft of bamboozling millionaires via Stephen’s byzantine schemes of intrigue and daring. Along with their associate Bang Bang (Rinko Kikuchi), who has a penchant for nitroglycerin, they set up one final sting, the target of which is a bored New Jersey heiress named Penelope (Rachel Weisz). As their adventure unfurls, visiting exotic locales that include Prague, Mexico, and St. Petersburg via steam ocean liners, Lamborghinis and even by rail, Bloom finds that his brother’s con may have more layers than he thinks. “This film is an exciting, globe-trotting, funny con man movie,” observes cinematographer Steve Yedlin (Brick, Conversations with Other Women), in an effort to define the cross-genre affair. “But it’s also a story about how our lives are less about circumstance and more about how we narrate circumstance to ourselves in our heads.”

Yedlin has been telling stories with a camera ever since he was a teenager. He made short films in his native Los Angeles, and while in still high school, started volunteering as an assistant on student films at the University of Southern California’s School of Cinema. It was on one of these productions that he met then-USC student Johnson. The two became fast friends, and Yedlin has since shot everything Johnson has helmed. Yedlin, who subsequently also attended USC, started in the industry as a gaffer on features, commercials and music videos, and shot the occasional micro-budget film. “The kind that don’t exist anymore, in that they were self financed and shot on film,” the cinematographer smiles.

Even before Johnson wrote The Brothers Bloom the two pals discussed how to shoot the project. Johnson described how he wanted the film’s look to consist of a “theatrical realism.” “If another director were to say, ‘I want it theatrical but realistic,’ I would need a lot of clarification, because without any more information, that’s a contradiction,” explains Yedlin. “But Rian and I have talked about film so much that it was easy to decipher what he meant. It’s actually a discussion which he and I have had since we were 17 years old. For example, why can a lit scene sometimes look more natural when captured on film than a scene of actual natural light?”

Johnson envisioned having brilliant whites as a motif that would reappear throughout the film. This is most notably exemplified by the spotlight in The Brothers Bloom’s climactic theater scene, the culmination of Stephen’s life to create a con so perfect it actually becomes real. The use of a bright spotlight and the theater location is tied to Stephen always telling stories and orchestrating them like a play. When the spotlight is in the shot (like all high contrast elements in the film) it blooms out beyond it’s own edges due to a special diffusion filter Yedlin hit upon during pre-production testing. Inspired by 1970s cinema, he had chosen Harrison diffusion to accentuate the blooming whites.

“The filters are pretty extreme in the way that they cause high-contrast edges to glow beyond their own boundaries, but not too extreme in milking the whole image or causing it to be hazy or washed out,” Yedlin explains. “I’m generally not a big fan of lens diffusion but the blooming that you get around windows for day interiors worked so well for what we were going for.” Aside from the theater, the filters are noticeable throughout the film, including but not limited to the portholes in Penelope’s room on the steam ship, the lampposts with spherical fixtures outside the beach house in Mexico, and the large mullioned windows in Penelope’s New Jersey mansion. “There’s an ongoing theme of ‘all the world’s a stage,’ and of Stephen constantly putting his younger brother, Bloom, in the spotlight,” adds Yedlin. “Representing that with bright blown out whites, which visually echoed a spotlight, kept that theme in play.”

The production received cameras from Panavision London and used a Millennium XL for the A-camera, a Panaflex GII for their B-camera, and an ARRI 435 for their C-camera. Their second unit, led by cinematographer Jaron Presant, borrowed camera bodies as needed for most of the project, but expanded itself to a six-camera unit for one of the extended car-chase scenes. For lenses, Yedlin employed mostly Primo zooms — a Primo 11:1 (24-275mm), a PMZ (Primo Micro Zoom 14.5 – 50mm) and a Primo 4:1 (17.5 – 75mm). The DP exposed on Kodak’s VISION2 5218 and 5205 film stocks, with the latter often being pushed for entire scenes. “Creatively, we ended up treating the movie as though we had three stocks,” explains Yedlin, “but having the actual number of stocks limited to two made it easier to do country-by-country film orders, as we couldn’t move the unexposed stock across borders.” Bloom was shot in Super 35mm with a 2.40:1 aspect ratio.

Much of The Brothers Bloom was shot in a single camera approach. Johnson has a unique perspective on coming up with shots for sequences. Unlike some directors who might shoot standard master and coverage, Johnson has a set of shots that are designed to cut in a certain way with wide shots turning into a close-up and vice versa. “It would almost never have been time-saving to use two cameras because it just doesn’t work with Rian’s style,” says Yedlin. “We have a lot of wide-lens material, often panning 180 degrees, and even medium and close-ups are on wider lenses, which usually prohibits two cameras.”

Despite the larger budget and scale of the film, Johnson and Yedlin’s Sundance-friendly roots, ala Brick, were never too far from hand. For example, they relied on simple ceiling bounces instead of rigged overhead lights in several locations, including large scenes like the theater in St. Petersburg and a burning library in Berlin. “Although we had a remote head for several weeks,” Yedlin explains, “we sometimes used a jib arm with a fluid head and no remote head; most notably at the curator’s apartment. Also, the sharing of lenses and camera bodies with second unit, rather than them having their own gear, was certainly in the style of a low-budget project. The principle we worked under, which is good for all styles of filmmaking, low budget or high, was to create a robust and precise plan that while adaptable, increased efficiency and decreased excess.”

That concept shines through in the film’s camera movement, which varies by scene from sweeping pans and fast dollies to the much more understated, with Yedlin and Johnson preferring dollies to Steadicam. The DP employed a Super PeeWee IV and a Hustler IV but was also fond of smaller dollies such as Sprinter and Rocker dollies made by German manufacturer Movie Tech. “The Sprinter is kind of like a doorway dolly in size but it’s much lighter and easier to move,” he explains. “It’s made of steel and aluminum and it has a Euromount bolted to it with seat risers, so you can do shots while you’re panning 180 degrees. The Rocker dolly is even smaller and is kind of like a skateboard dolly that you see in the States.”

Yedlin says one of his biggest challenges for The Brothers Bloom was scheduling a lighting package that was not only extensive and complex, but had to keep evolving according to whatever country he was shooting in. Gaffer Dave Smith received most of the equipment from AFM London and his gear was constantly coming in and going out. For the large output units, Yedlin carried 18Ks but day-played things like balloon lights, Xenons, and additional 18Ks. One lighting tool he loved for interiors were the Chimera Video Pro strips, which are Chimera bags that are long rectangles. He used them with socket Speed Rings fitted with light bulbs from 250 watts to 1,000 watts.

Another lighting accessory that came in handy was Depron, which is thin foam that the DP used for diffusion and bounce. “Even though it’s a diffusion, there was one scene where we were actually using it for hard light by shooting a very small spot into it,” he describes. “Instead of filling it up and making it a big soft source, we would shoot maybe a four-inch diameter circle into it. You get the directional shadows of hard light, while still getting the smoothness of soft light. There’s no sense of it coming through a lens or it being focused, but the shadows are just as sharp as a hard light.”

U.K.-based production designer Jim Clay (Children of Men) was a key partner and his experience and creativity can be seen throughout the film, perhaps nowhere more than in the finale in a burned out St. Petersburg theater. The location’s exterior was shot in Romania, but the interior was built on a stage in Serbia. Clay put together visuals and miniature models of the set for Johnson and Yedlin to work out camera and lighting plans in advance. “He had so many photos of different locations and designs,” marvels the DP. “He would sketch everything out and it was very thorough. Jim is a master in that way.”

The Brothers Bloom was mostly processed at Kodak Cinelabs Budapest in Hungary, with the DI done by Skip Kimble at Modern VideoFilm in Glendale. Yedlin was involved throughout the post process, noting that the main thing he and Johnson wanted from the DI was, “the increased image quality over an optical squeeze, and the ability to repair potentially milked-out blacks from the Harrison diffusion, since milky blacks were not the aspect of that filter that we liked.” Transitioning from an indie low-budgeter like Brick to a huge travelogue, filled with Academy Award-winning actors, and shot in multiple Eastern European locations, did not seem to faze Yedlin. “Honestly for me nothing was that different,” he says. “The big change was really the long schedule. But you just work it out space by space and talk about how you’re going to do it. Rian and I really think out our shots,” he concludes. “We don’t make anything bigger than it has to be – even if it is a big scene. Since it wasn’t an option to spray money at anything, it really came down to careful planning of each individual scene. Second unit DP Jaron Presant described the movie as the biggest low-budget movie he’d ever seen. It really did feel like that because it was so ambitious, given the resources that we had.”