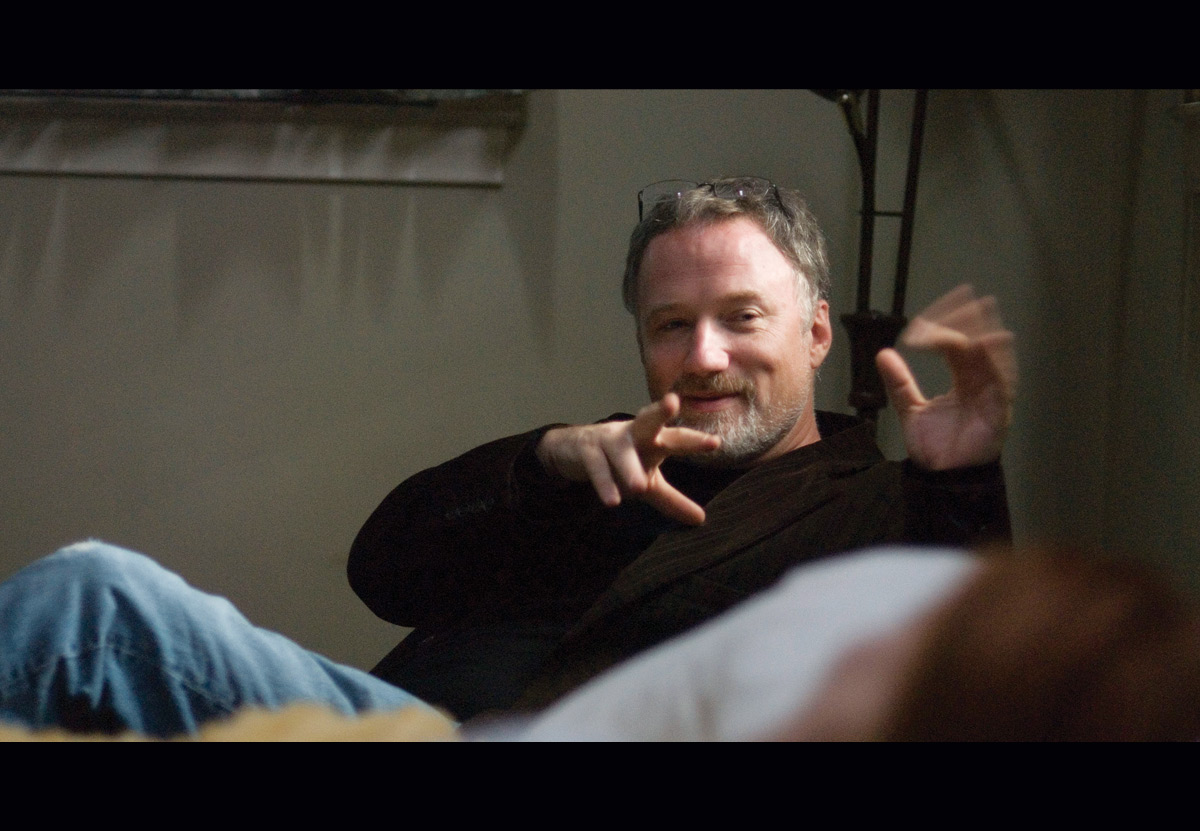 Since his debut feature, Alien3, in 1992, David Fincher has been a fearless “first adopter” of new technologies and production methodologies to change the face of genre films; using bleach-bypass to evoke the bleak and nameless urban metropolis in the crime drama Se7en or employing a virtual cinematography workflow to achieve otherwise impossible camera fly-throughs in his gripping modernization of the home invasion film, Panic Room.

Fight Club, made in 1999 was the second of Fincher’s three collaborations with Brad Pitt, and the film seems ageless, still reflecting the zeitgeist nearly ten years after its debut; likewise for his first teaming with Pitt, Se7en, which blew apart the conventions of the serial killer movie and sparked a slew of stylistic imitators. Of course predicting being ahead of the curve isn’t anything new for Fincher, who began his career as an assistant cameraman at ILM shooting miniatures for the Star Wars and Indiana Jones franchises. His trend-setting music video work made him an early star with Propaganda Films, which went on to launch some of the industry’s most original talents – Michel Gondry, Neil LaBute, Spike Jonze, and Gore Verbinski to name just a few. Talk about prescient: Fincher’s commercial spot for AT&T (You Will) gave consumers a “peek” into their own wireless, Web-obsessed future way back in 1993; ditto ten years later with his all-digital spot for HP (Constant Change).

Early word on The Curious Case of Benjamin Button (see cover story), shot by Fincher’s one-time gaffer and more recently, his commercial DP, Claudio Miranda (and again featuring Brad Pitt in the title role), indicates an odds-on favorite at next year’s Oscars. A morality play and love story that covers more than nine decades in American history, Button puts visual styling and special effects in the service of character and story like no other David Fincher film before.

ICG: Did you come across the original F. Scott Fitzgerald story for The Curious Case of Benjamin Button directly or was there already a script? DF: It was sent to me years ago, by a guy working for Ray Stark who then became my agent.

Button was shot mostly in Louisiana. What was it like down there at that point in time? It was maybe six or seven months post-Katrina. We were delayed a bit in construction because you couldn’t get supplies – and rightfully so, since people needed to repair their roofs. I don’t think we could have started any sooner than we did. New Orleans was wonderful, and they seemed to appreciate having us. They even let us shut down the Garden District for five months.

Your DP [Claudio Miranda] mentioned being a little surprised at how open you were to improvisation on camera setups with this film. Was it a deliberate change of approach to not lock everything down in previz? I’m always for previz, just to get everybody on the same page and to avoid a lot of slack-jawed people asking the same question over and over. And we did previz on the tugboat, and pre-designed the train station, which was a partial set surrounded by bluescreen, in CAD. But it wasn’t practical to do to the usual degree given all our locations. There was so much to be decided upon after we were in Louisiana, it didn’t make sense to draw boards when you might not find a place that matched that look.

So nobody did a LIDAR scan [a radar-like survey of a location that allows for 3-D reconstruction] during scouting? That would have been great! If only somebody would do that, I’d love it! Honestly, shooting on location was the only way to make this film for the money. There were a lot of aspects that would have been built on stage otherwise. So we’d find a room here, a porch there …

Claudio mentioned his natural-light location stills evolved into a basis for the film’s lighting. Well, it’s a kind of ongoing conversation between us. We muse on the fact that location scouts take pictures of a spot, we fall in love with the pictures of that spot and what it has to offer, but then you bring five 40-foot trailers and it looks like some over-filled, crazy flat version of what you wanted. So we tried to be happy with what we were going to get on the day.

You seem to have avoided falling into the director-for-hire position filmmakers sometimes find themselves in. All of us look for a next project we want to make. Some of those could be obvious commercial choices, I suppose.  I don’t think of myself as a director-for-hire; I am a working Hollywood director, but one who tries to be picky about the stuff I do. I have certainly worked on things that I thought would be easier and go off without a hitch, but they didn’t. Zodiac was a ‘little movie’ in-between big projects. It was actually supposed to happen after Button, which I started talking about in 2001 and 2002. But then Zodiac fell into place just as Button seemed to be too costly for everybody.  In that respect, I guess I am a working stiff, trying to land a good gig here or there.

Was coming up with a credible approach to the story’s de-aging storyline part of what kept Button from happening seven years ago? When technological ability increases, the cost of marshalling the technology comes down. As time passed, it became more feasible to achieve the effects themselves, and also to do it more cost-effectively.  But they still cost a lot!

Given Button’s long gestation, some might have lost enthusiasm. Was there something in particular that kept your interest from flagging on this project? It was just a beautiful story. And I appreciated the fact it was a love story that dealt so unabashedly with mortality.

So it was more of an issue of universality than just “the one that was different from the norm?” It’s both. When you make a movie about someone who is different, an audience relates to the characteristic that is common. So even though he is born and going in a different direction, he will end up in the same place, asking the same questions. Did we make an impact? Did we change things? Did we leave people with the kinds of memories of us that we’d hoped?

You’re known both as a visual stylist and as someone who explores new technology. Do you set out to break new ground each time, or is it a matter of the story at hand? With all the rigmarole of establishing a digital workflow [on Zodiac], that was with the notion of making my life easier. It required a lot more in the way of initial setup, but once we were in post it made a huge difference.  With all the effects shots and changes that had to happen with Button, we probably couldn’t have even made that story on film. To have a P.O., cut and scan neg, and then try to extend the shot eight frames – it would have been a nightmare. I don’t think we’d have finished.

This is our independent film issue, and we’d like to get your thoughts on independence of vision and what that constitutes in your view? Oh, I don’t know. Most people I know make the movies they want to make. And that means something, because we’re talking about a big apparatus to do what you want to do with a film. And for their part, movie studios want to have somebody who has a very specific goal to accomplish.

A specific methodology, or is it more about the kind of story-telling? I think content is the thing that most differentiates movies. Certainly the way they are marketed separates them too. But it is up to the filmmaker to make choices. We all know there will be more superhero movies and more sequels. But something original always gets those started. Without the first Matrix, you don’t get to the other two. That was a big risk, a balls-out risk. It requires a level of jumping into the unknown that corporations hate, and yet without it, ultimately they won’t get to make those sequels.

So in this day and age, does that mean demonstrating to the studio that there is the technical expertise in place in addition to the creative vision? I think that there are wonderful directors who worked without possessing a lot of purely technical information. John Huston came from being a writer and barroom brawler; Alexander Payne knows how to tell a story brilliantly; James Cameron can organize a huge logistical force. All of these people are artists, but each with his own strengths. There are always people around who know how to direct traffic and help with the technical aspects, so to me what it always comes down to is figuring out what is most important about the story and then how to show that aspect. There’s the moment when you decide whether to linger on a person’s face as he wonders ‘what’s going on?’ or on the other person’s face who just told a lie, who is wondering if they are about to be found out. What’s the story being told? – What you set out to get, what you’re given and what you do with it. All those separate instances that call for a decision on your part define how the story is told. And you seize upon aspects or the moment gets lost forever.