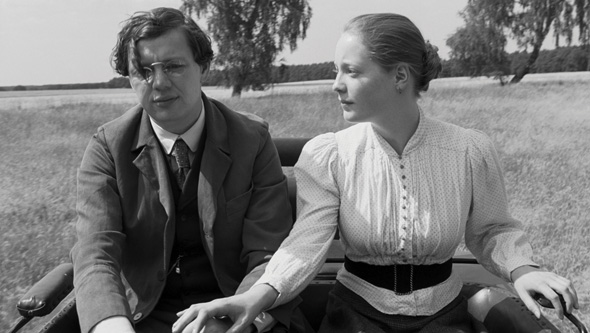 Black and White In Color

Behind the unique lighting approach of the Oscar nominated The White Ribbon with Christian Berger, AAC

Christian Berger, AAC earned a 2009 Academy Award nomination and claimed top honors in the American Society of Cinematographers (ASC) Outstanding Achievement Awards competition for The White Ribbon (Das Weisse Band – Eine Deutsche Kindergeschichte). It was the first time that a black-and-white film with English subtitles has been nominated for both Oscar and ASC Awards for cinematography.

In The White Ribbon, director Michael Haneke (Caché, Funny Games) transports audiences to Germany in 1914, where a mysterious series of brutal acts occurs in a small village. A teacher at the village school is trying to understand what is motivating the brutality and what lessons she should be teaching her students. The unspoken subtext is that the audience is previewing the birth of Nazism.

The film was the fifth collaboration for Haneke and Berger, who says the collaborators felt strongly that “telling a story set at that time and place in color would feel fake. Black-and-white film also has the power of abstraction.” And after testing, the pair decided that color negative film provided the latitude needed to record nuanced images with textures and contrast that reflect the time and place where and when the story happens more accurately than black-and-white film. They planned to drain colors out of the images during DI postproduction.

“I knew that with a 4K scan, we could retain the richness of contrast and tones as fine grain black-and-white images that look and feel right for the story,” Berger adds, who used a Moviecam Compact camera mounted with Cooke S4 lenses (usually fully open at stop T2 for the night scenes) to cover scenes.

“There is no formula for how to light movies,” the cinematographer explains. “Everyone does it differently based on their instincts and their experiences. People’s homes were lit by fireplaces, oil lamps and a few candles at night. There are also scenes in a baron’s mansion where the firelight is richer. Night exteriors were motivated by torch light.”

Berger usually lit day, night, interior and exterior scenes with a single lamp. He explains that the B & B Cine Reflect Lighting System (CRLS) allowed him to diffuse and bounce light to where it was needed. B & B stands for Berger and Bartenbach. Christian Bartenbach is an award-winning architectural lighting designer. He and Berger are longtime colleagues, who collaborated on the design of the B & B Cine Reflect Lighting System in 2001. (Berger was born and raised in Innsbruck, Austria, where his mother was a dancer and his father was an artist who also painted backgrounds for theater sets. After graduating from college, Berger spent three years working for Bartenbach, who was designing industrial lighting for streets, bridges, buildings, stores, etc. The DP describes Bartenbach as his “mentor.”)

Berger began shooting black-and-white news film for an Austrian television station during the late 1960s. In 1972, he and a few friends organized a company that produced documentaries and short narrative films for television and art house theaters. He began shooting independent feature films during the early 1980s.

Berger initially used the B & B CRLS in 2001 during the production of La Pianiste (The Piano Teacher), also directed by Haneke.

The current version of the B & B CRLS consists of two Panibeam lights, and seven types of Paniflectors that are available in various sizes and shapes with textured surfaces. They are designed to mimic light coming from the sun, moon or other natural or artificial sources. The RLS-70 Panibeam uses a 1.2K watt lamp, and the RSL-40 uses an 800-watt lamp. Lightweight Panigrips are used to mount lights and reflectors.

Berger employed the unique lighting system for day and night scenes in The White Ribbon much like a painter with a brush. He explains, “It generally takes much less time to set up a Panibeam and place reflectors around the set. And it’s designed to be completely unobtrusive.”

One such example: A dramatic scene was filmed at a practical location in a church in the village.  No lights were used inside the church. Panibeams and reflectors were placed around the church – coming through the windows to create the right emotional and practical tone for the scene, including special accents for the main characters.

Another scene was filmed at twilight on a kitchen set in the boy’s house in the village. The boy is talking to his sister about what happens after they die, and the scene is very much a reflection of the mood that is gripping the town. Berger says the light from the Paniflectors coming through the window created an aura of twilight and lit the girl’s eyes, revealing her unspoken feelings. The boy’s face was turned away from the window; a very small direct Paniflector was positioned to create “a tender reflection” on his face and in his eyes. Berger also stresses that, “in addition to lighting quickly, there were no lamps, cables or stands on the set to distract the young actors.”

Berger says The White Ribbon’s cast, including the youngsters, responded to light, shadows and darkness. “There are many things you can you do in DI, but my job as a cinematographer includes creating the right environment, getting it on film and making sure that there is enough information to balance the luminance and colors afterwards without changing the atmosphere,” he insists. Haneke and Berger put finishing touches on the look while the negative was being desaturated in the DI to create a black-and-white intermediate film.

When he isn’t helping to create films for today’s audiences, Berger holds a professorship at the Film Academy of the University of Music and Performing Arts Vienna, where he teaches the next generation of cinematographers who will follow in his footsteps. The B & B Cine Reflect Lighting System is manufactured and rented by the Pani Projection and Lighting Company in Vienna, Austria.
More information is available on the Pani Projection and Lighting Company website at www.pani.com and on Berger’s website at www.christianberger.at.