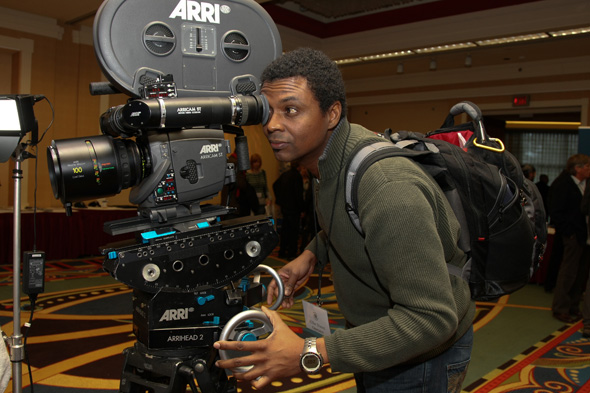 If It’s Digital, They Will Come…

We all remember those voices Iowa corn farmer, aka Kevin Costner, heard back in 1989 in Phil Alden Robinson’s Oscar nominated Field Of Dreams, exhorting him to give the people what they want. In Costner’s case it was a baseball field; in the more recent example, at the Guild-sponsored Mega Digital Summit in Atlanta this past January, it was the more than 80 IATSE Local 600 members who flocked to the shimmering playing field that is new media: directors of photography, 1st and 2nd AC’s, digital imaging technicians, loaders and operators all assembled at the Atlanta Airport Hilton for a weekend dedicated to the advancement of digital technology in the motion picture industry.

“Events like this make it clear that our union is doing everything they can to make sure we’re as qualified and prepared as we can be for all this new information that is coming out,” expressed Chicago-based 2nd AC Shannon DeWolf.

Panelists included seasoned directors of photography, experts in color management and digital capture. And more than 15 exhibitors, including Panasonic, Abel Cine Tech, ARRI, and Band Pro Film & Digital, Inc. donated their time and expertise to members looking to get up close and personal with new digital equipment. “We are training for the future with cutting edge information and events like this,” affirmed national training committee chair Mark Weingartner, as he kicked off the weekend.

Dave Satin, a DIT and seminar panelist from New York City, candidly stated that, “tapeless recording is here to stay – for economic and technological reasons it fills the bill and allows the workflows people want to have to be successful.” Still, with the advent of on-set data-based workflows, there is a discrepancy between capability and execution, as Weingartner described. Echoing his peers he explained that, “we want to go tapeless, but we’re stuck as to how to reconcile that on the backend.”

Training platforms, like the recent Data Handling Seminar, held in Los Angeles, Chicago and New York are the best way to keep Local 600 members up to speed on file-based and tapeless recording. Matt Jackson, a 2nd AC from Atlanta, talked about his experience in Chicago, where he had arrived with preconceived notions. “They all got thrown out the window,” Jackson remarked. “A lot of techniques we were coming up with on projects were wrong and going to the seminar really cleared a lot of that up. I came back to Atlanta and told some colleagues how the union is trying to get a standard going and everyone was on-board.”

Other members who attended the data handling seminar said they felt better-equipped to handle new equipment on jobs. “I took several good tips and even used them on a job the following Monday,” Satin observed. In response to the pressing need for standardization, Weingartner highlighted that, “standardized metadata” is in the works, with the American Society of Cinematographers (ASC), the Academy of Motion Picture Arts and Sciences (AMPAS), the Society of Motion Picture and Television Engineers (SMPTE) coming together to make it a reality in the near future. “In the meantime,” stated panelist and DIT Gary Adcock, “we have to understand what it’s being used for and how to handle it properly.”

Panelist Jim Thomas is Panasonic’s P2 application workflow engineer. He’s a Local 600 member and he explained further the discrepancies with new technology and equipment adding that the hard part is, “there is no right and wrong when it comes to digital filmmaking. The mystery is only solved when a standardized process is created.” Which is precisely what Local 600 is attempting to do with digital training and seminars. “Just the same way you were taught to load a magazine,” described Satin, “you’re taught by brothers and sisters [at these seminars] who know what they’re doing so you develop a methodology that leads to success every time.”

Another avenue to success would have been to attend one of the DP/DIT panels and discussions held over the weekend. Attendees testified they were among the most informative and valuable sessions. Panelist and DP Paul M. Sommers (The Vampire Diaries) aptly noted that “this is a place where we can sit down and have an open and honest discussion about our profession. Without that how do we present a united front to the producers?”

The panelists went on to reveal how in a perfect world producers would understand that a DIT is an integral part of what the DP does on the set of a digital shoot and would hire accordingly. Unfortunately, this challenge remains the biggest obstacle with studios and producers in the ever-advancing digital push in film and television.

“With film, [DPs] had a very technical job but it was discreet,” explained Sommers. “The cameras were less complicated, the target was bigger and the expectations of what we had to achieve on set were smaller. Now I’ve acquired the responsibility of coloring dailies at the same time I’m shooting the show. From that perspective I’ve taken on another job classification and without my DIT, Nathaniel [Miller], we’d go two hours longer every day.”

Cinematographer Roberto Schaefer, ASC (Quantum of Solace, The Kite Runner) credited the seminar with continuing open discussions on how best to approach new issues when there are no specific guidelines for what a DIT does. “When I work on digital shoots I don’t like to be without a DIT. They are my tool on the technological side and my partner on the creative side,” Schaefer said. Liam Dale, a Local 600 loader from New Orleans, echoed Schaefer, adding, “if we don’t give our DPs the technical backup they need on set, we start forcing them to spend time solving problems they shouldn’t need to worry about.” Schaefer made it clear that it is a high priority of his to make sure he and other DPs impart the importance of this integral relationship on producers “before it gets to the ‘What does a DIT do?’ conversation.”

So what does a DIT do? Panelist Miller’s non-technical answer was concise and as clear as a non-standardized job position can be: “The DIT handles and maintains solid image and signal and workflow throughout the entire process – from pre-production to final color. [We] hope to be an agent of assistance as far as maintaining [the DP’s vision], with solid technical data needed to accompany it. Half the battle is educating the producers and the other half is merging into the camera crew.” Miller elaborated on the key crew relationships saying how his relationship with Sommers is just as important as with the 1st AC, the 2nd AC and on down the line. “If the department doesn’t work together, it will fail.”

In light of the cost-cutting mania that has become standard practice in the motion picture industry in the last five years, it has become necessary to have directors of photography who will fight for DITs. “DITs are not expendable and we have studios saying they are,” Doering insisted. Sommers added, “As a DP, my argument for [my DIT] is that I need someone out in the field who knows every minutiae of detail of our digital capture technology.”

The final panel of the weekend dealt with on-set color management. Weingartner, who moderated the panel, described the goal of on-set color management as the transmission of the artistic intent of the director of photography. With the increase of on-set color management it is becoming even more necessary to keep an open line of communication at every point through production and post workflows. However, not every project out there will create looks on set, so it’s up to DPs and DITs to “express its merits to producers in the shooting and post process,” explained L.A.-based DP and colorist Andrew Huebscher.

On-set color management and new equipment to support it, such as IRIDAS’ SpeedGrade OnSet and the 3cP System from Gamma & Density (both presented at the summit) is another indication of the changing workflows on digital sets. Schaefer, also on the panel, said that on-set color management was vital in order to keep the image control in the hands of the cinematographer and not under the purview of post-production. “You must thoroughly test your workflow to filter out any hiccups or surprises,” added Huebscher, who agreed that on-set color grading is one of the many ways the lines are blurring between production and post.

“The blessing and the curse in the digital arena is that there are so many opportunities and capabilities with color management,” added Weingartner. “The trick is in creating a feedback loop between yourself and the colorist that ensures that the images people see look the way they are supposed to look.”

This year’s Mega Digital Summit was a deviation from the format done in previous years. “As well as the seminars had been working,” explained Weingartner, “I felt we could tailor them better to the individual needs of the members. The new format of multiple exhibitors/vendors and multiple optional panel discussions grew out of discussions between myself, Lewis Rothenberg and Rusty Burrell, with some input from Gary Adcock.” This year’s event was put together primarily by Burrell and John Johnston of PERA. Weingartner created and oversaw the panels and national office event coordinator Joanna Mousseau handled most of the logistics. Gitlin was also involved in planning and execution.

“This [Mega Digital Summit] was an experiment, and judging by the feedback during the event it worked quite well,” concluded Weingartner. President Poster added, “This is achieving the dream of the officers and the board to make sure that our members have the best skill set in our industry. What we do for them is all about jobs, jobs, jobs.”

By Valentina I. Valentini