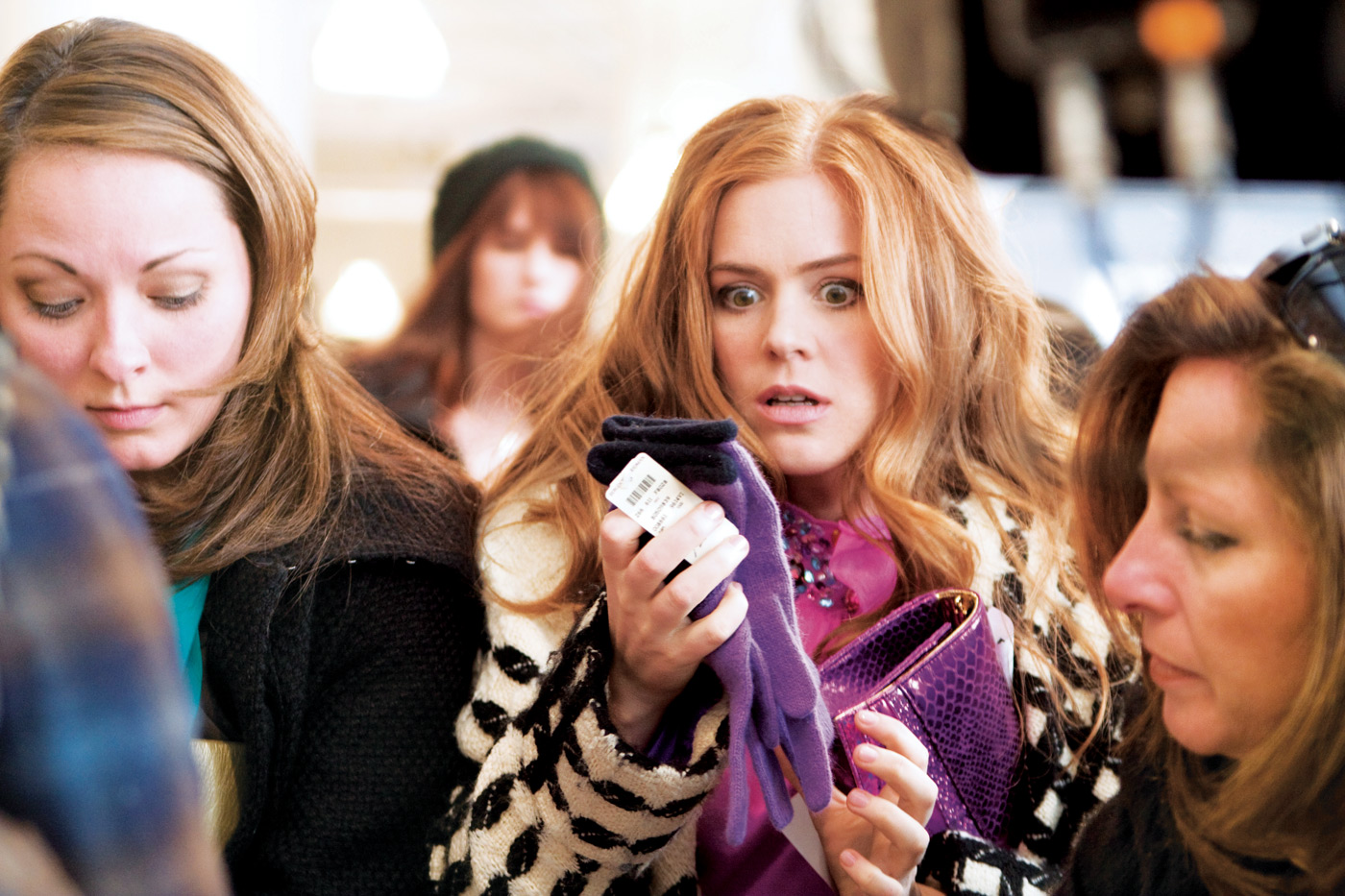 Capture the out-of-control life of a shopping addict, the frenetic pace of New York City, and the over-the-top fashions lining retail racks. And make it funny. In anamorphic. That was the charge for cinematographer Jo Willems on the sexy new haute couture comedy from the Walt Disney Company called Confessions of a Shopaholic. Based on the wildly successful novel of the same name by Sophie Kinsella, the film centers on Rebecca “Becky” Bloomwood (Isla Fisher), a young journalist with a serious shopping addiction. It’s a love story – between Becky and clothes, and Becky and her suitor, Luke Brandon (Hugh Dancy).

The film was a definite departure for Willems, whose previous work includes the dark horror film 30 Days of Night, the teen dramedy Rocket Science, and the thriller Hard Candy. A chance to shoot a different genre with director P.J. Hogan of Muriel’s Wedding fame made him jump at the opportunity.

The production team (including Willems, Hogan and production designer Kristi Zea) had a clear directive from executive producer Jerry Bruckheimer to create an iconic yet realistic look for the film. And Willems was determined to avoid the standard romantic comedy look. But finding an alternative that could handle the bright cityscapes and vibrant clothing was a challenge for the Belgium-born cinematographer. “I had never done a movie this colorful, and I usually see things much more de-saturated and devoid of color,” he admits. “When I first saw the wardrobe and some of the sets, it was a shock to my system.”

To do justice to the stylized attire, hairdos and make-up, and production design, Willems decided to channel an iconic filmmaker whose stock in trade is high-key vibrancy. “I imagined we were shooting an early Pedro Almodóvar movie,” the DP confesses. “He was my style reference, and I kept imagining the film in Spanish, with Almodóvar whispering in my ear, ‘It’s OK, this is great!’”

With the clothes being such a huge part of the storyline, it would have been easy to create scenes that looked like a Macy’s ad or an infomercial for a fabric wholesaler. To avoid that, Willems tried not to be overly conscious about the outfits, shooting them with strong color and contrast to keep the frame from washing out or looking flat.

“A lot of DPs won’t do romantic comedies because they can be limiting and the lighting isn’t too edgy,” notes the New York-based Zea, whose credits include an Oscar® nomination (as a producer) for another big city romantic comedy, As Good As It Gets (1997). “The genre has a tug-of-war with the visual component. One of the things Jo brought to the table was that he wasn’t afraid to walk that line. He was adaptable to the notion that romantic comedy doesn’t have to mean flat lighting, that it’s better when it isn’t.” The result of the tension was a new look for the genre. “We were basically working together very specifically to make sure the look of film transcended the genre,” Zea explains. “It isn’t derivative – it’s eye-catching, fun and iconic.”

Hogan and Willems decided to shoot in anamorphic format because it would allow for the richness Willems desired and the “magical” look Hogan is known for. “We did discuss the dangers of comedy and shooting in the 2.40 aspect ratio,” Willems says. “We were frustrated at times, but I’m happy we did it that way.”

True anamorphic creates a slew of practical and aesthetic issues, the most obvious being the need for multiple lenses for handheld, Steadicam and studio-mode shooting due to lens weight, with some matching up better than others. Certain anamorphic zooms are soft at certain focal lengths, and critical focus is different from series to series. Ultimately, the Shopaholic crew settled on the Panavision E-series, C-series, primo zooms and the 40-80 zoom. But the format, coupled with the improvisation and physicality of comedy, created a demanding work environment for the first assistant cameramen.

“Our focus pullers, Bobby Mancuso and Geb Byers, were up to the challenge of free-roaming actors in the anamorphic format, which was not easy,” says Dave Thompson, the film’s Steadicam operator. “The concentration they both had to display to not only keep it sharp but also not to laugh at the scene playing out before them was amazing.”

The Steadicam wasn’t initially planned to be a big part of the film beyond a few walk-and-talks. But the rig’s ability to bring the audience into the action helped establish the out-of-control nature of an addict without being as frenetic, or exhausting, as the overuse of handheld camerawork.

Take the “chase” scene in which Becky, in debt up to her earrings from her shopping addiction, is pursued by a bill collector in Manhattan’s famed Hearst Building. The action starts on the ground floor as she enters and goes through a turnstile, and then boards one of the four escalators. The debt collector is unaware of her and gets on another escalator that runs parallel but is about four feet lower.

“The tough part of the sequence was not getting on the escalator at a fast walk, but keeping both of them in the frame,” Thompson recalls. “The dialogue continues up the escalator, which is about a two-story ride, and as they step off we are leading her. The debt collector is always in the background while Becky realizes who he is and tries to get away by moving quickly down a hall and into an elevator. It was a very ‘Hitchcockian’ shot with a comedic flair.”

To capture the go-go nature of life in the Big Apple, the crew shot on location along Fifth Avenue, and in some of its most notable retailers, like Barney’s and Bendel’s. Finding locations that balanced Manhattan’s sophisticated architecture against the wildly colorful window dressing and wardrobe meant Zea and Willems worked closely together. “The DP and production designer have to work in concert,” Zea describes. “The sets are nothing if not properly lit or shot. And locations are found and reviewed carefully with the DP because if he can’t light or shoot them, they’re not worth anything.”

One such favorite example was the Hearst Building, which serves as Becky’s workplace in the film. The property is a startling blend of traditional architecture on the first few floors topped off by a towering steel-and-glass sculptural addition. “It’s an incredible skyscraper that pulls you right up to the world of high finance and high fashion,” Zea continues, which meant it was eye-catching, but not scene stealing, because as the veteran designer explains, it’s critical not to pull the audience out of the film. “That’s an important mandate for any good DP or production designer,” she notes. “You don’t want the shot to be so lit or the set so complicated that people say ‘great shot’ or ‘great set’ because that means they’re not following the movie!”

Another challenge to shooting in New York was climate.

“Cold weather impacts makeup, hair, skin texture, skin tone and performance,” Willems explains. “I can tell you that parkas weren’t a part of the wardrobe design.”

That meant Fisher had to brave frigid temperatures in fashionable, i.e. teensy-weensy, sexy dresses. Sure, she was given marvelous coats to wear, “but one was literally taped together to fit right so it offered no protection,” the young Australian actress laughs. “Becky was a hue of blue.”

To compensate for the chill, gaffer Jay Fortune lit her softly using big frames as close to her as possible. “We used 18Ks for day and 20Ks for night bounced off 20-by-20 ultra bounce frames and then through 20-by-20 full grid frames,” Fortune describes.

The leading lady says she appreciated the extra effort in all things lighting. “When you’re in your 30s, things don’t translate as well on camera as much,” Fisher laughs. “Shadows fall unflatteringly on your face and such. So from a vanity perspective, a good DP is everything.”

But Fisher also concedes there’s less pressure on her to look a certain way than there is for dramatic actresses. “In comedy, I’m going to twist my face up in a hideous grimace anyway, so no matter how you light me, I’ll always look slightly rubbery.”

That’s a relative description given the star’s beauty and natural comedic timing. But either way, Fisher says Willems was critical to her performance. “You’ve got a very special relationship with the DP because he’s the closest to the camera,” she explains. “The director is sitting by the monitor, not in your space. But because he’s so close, the DP’s energy affects your performance. Jo was so patient and had great energy. I always take time to develop a good relationship with the DP. Not only because I want to be lit well, but it’s the most intimate thing to have someone watching you so closely.”

Willems says Fisher’s trickiest scene, from his standpoint, was one in which the camera follows her stiletto a few inches behind the heel while holding her character in the background. Why not use track, you say? Because the entire floor was in the frame! “The lens had to be so low to the ground and so close to the subject that we had to shoot it spherical,” Willems recalls. “I think we ended up shooting it on a 17.5 mm lens with a Libra head mounted to a Fisher 10.”

The cinematographer adds that his proudest moment was a “fun surprise” in the bridal store, where Becky’s gal pal Suze is wearing a wedding dress so large it practically devours the duo as they sit on the couch. “The light that bounces off the dress makes the girls look fantastic,” Willems beams. “It’s very rare that you can get so much white around someone’s face like that.” In fact, the only elements used to light the store were a few China balls: a 1,500-watt gem ball and a 2K backlight. “It sure wasn’t the biggest setup we did in the film, but it’s one of my favorite moments.”

Steadicam operator Thompson says the scene was vintage Willems. The two had recently worked together on the independent Sundance hit Rocket Science. “Jo’s sense of lighting and camera movement is very organic,” adds Thompson. “And he can handle any situation that presents itself. If I could do every movie with him I would.” For his part, the cinematographer notes that Shopaholic fed his desire to make films with a social message. Among his influences are Ken Loach and his fellow countrymen the brothers Dardenne, all known for their social commentaries and realist portrayals of the lower classes.

“I want to make films that don’t just exist in their own world, but have a cultural context,” Willems concludes. “When I read Shopaholic, it was more than just a couple of girls running around in pretty clothes and doing funny sketches. It’s a movie about debt and how people deal with money and consumption — which is on everybody’s mind at the moment.”