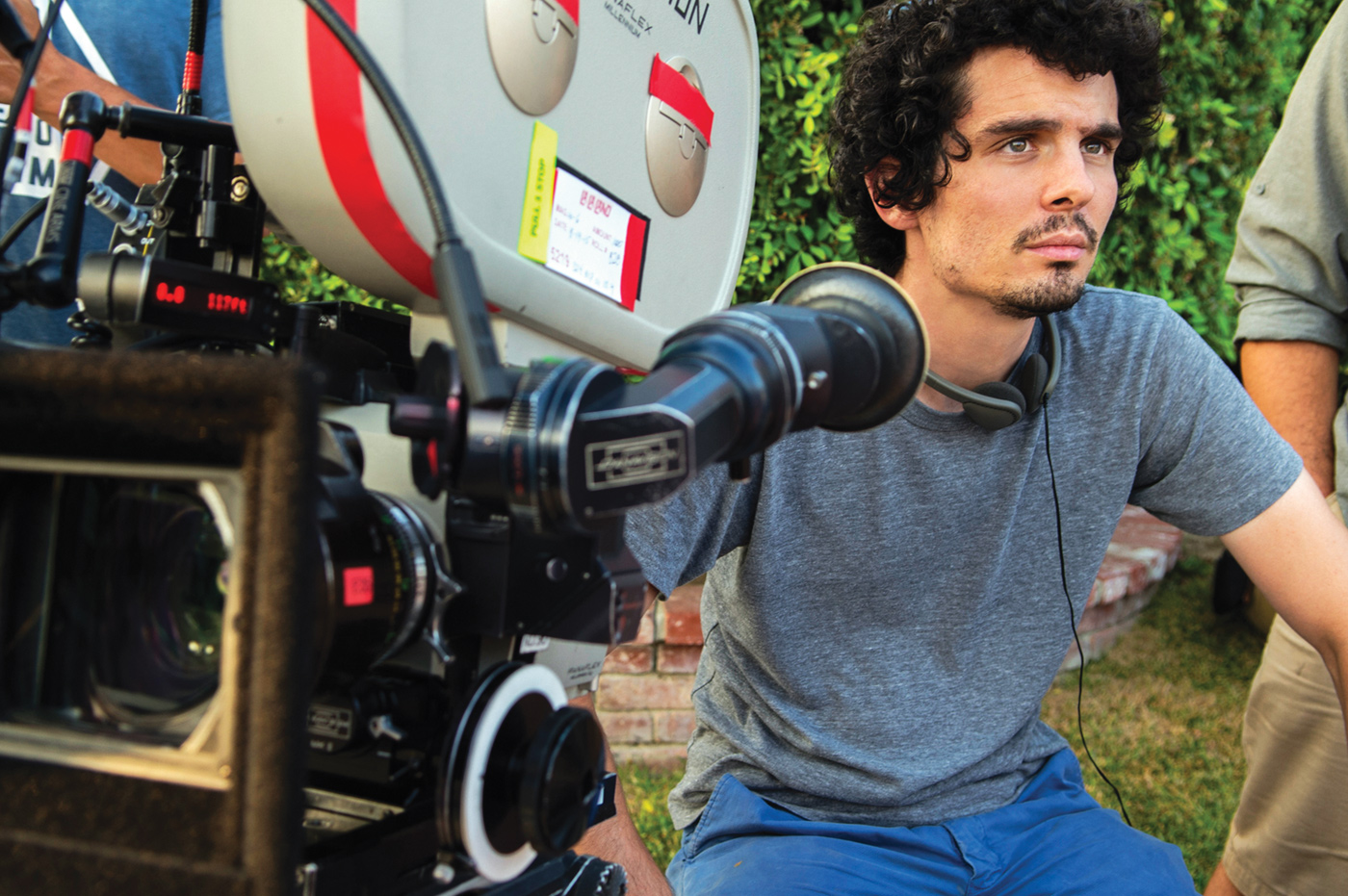 Whiplash, the Oscar-winning Sundance hit that rocketed director Damien Chazelle to the top of every producer’s must-call list, was not necessarily a good predictor for the stunning follow-up that is La La Land, a candy-colored romantic musical inspired by 1950’s Hollywood and Chazelle’s hero, French director Jacques Demy. As shot by Linus Sandgren, FSF (Joy, American Hustle, Promised Land), the camera in La La Land floats lyrically amidst the action, not unlike one of the woodwinds in the 95-piece orchestra composer Justin Hurwitz used to create the film’s music. Stylistically, Chazelle describes Whiplash as a movie about “punctuated editing” and “right angles,” while La La Land is “all about curves.” What both films represent is a startling reinvigoration of independent cinema, created by a filmmaker who draws as much from Old Hollywood (La La Land was shot in 2.55:1 Cinemascope and used complex staging for full-frame musical numbers) as new (elaborate crane and Steadicam work all done on location). ICG Executive Editor David Geffner talked with Chazelle about his passion for seeing movies in theaters and why La La Land was the perfect storm of creative talents, from cinematography to choreography and beyond.

“I’ve always wanted to make movies that, in another era, would have been studio films.”

ICG: You’ve followed up a Sundance independent film with a studio movie, made by a studio that left you alone to make an indie film, which is inspired by the glory days of Hollywood studios. Damien Chazelle: [Laughs.] That’s pretty much it in a nutshell. We actually tried to make this movie for five or six years via a studio or outside the system and it just wasn’t happening. Whiplash opened some doors for me, but there wasn’t a huge appetite for a Technicolor-type romantic musical set in 2016. Basically, Lionsgate was the outlier that took a huge gamble.

Whiplash (shot by Sharon Meir) was very different – aside from the handful of whip pans. How did you and Linus Sandgren come together? I wanted a camera that felt like it was gliding on air, at least for large parts of the story. It’s an approach somewhat similar to what Linus did with American Hustle. Then, when Linus was grading Joy, and I got to see some stills, I was even more convinced he was the right guy. The way [in Joy that the photography] would flip in and out of dreams and reality sequences, but in a gritty and grounded way, was perfect for [La La Land]. I think of Linus as an analog DP in that he likes to use older, traditional processes in new and contemporary ways. That’s exactly how I like to make movies. Honestly, after one meeting I was dying to work with him.

But you did not make it easy for him or his camera department! No, I did not; I was a bit of a creative sadist. [Laughs.]

I’ll say. Long single takes [some musical scenes are more than six minutes] on difficult-to-access real locations, and no B-roll. Where coverage was concerned, both Linus and I agreed the camera had to be a character in this film; it had to provide the audience with a privileged viewpoint. B-roll has that long-lens feeling that takes away that intimacy. As for using digital effects for background extensions or green screen instead of real locations, we did a little bit of that in the Planetarium scene for Emma and Ryan’s waltz in the air. But I wanted in-camera capture, not just for the sake of it, but because I believe there is a feeling, perhaps even subliminally, that [the audience] can tell the difference. Linus and I were walking around L.A. at magic hour, and the sky was just so unbelievable. We wanted to capture those colors and that magical glow the way you really see and experience it, not through post or enhancements in the DI.

How much did shooting in real locations – on a freeway or on a bike road in Griffith Park, for example – change how you had first imagined the film? I think it’s a testament to Linus’ genius as a DP that I never felt I had to radically compromise my original vision due to the limitations we encountered. We rehearsed a lot for both of those scenes you mentioned – many days in Griffith Park, with stand-ins, and just using iPhones at first, and then with the actors until the sun started to set. With the freeway scene, we had weeks of staging in a large parking lot with cars and a full dress rehearsal on location. But I won’t lie – there were moments in both cases, like lighting the road in Griffith Park to achieve this heightened naturalism before the sun was gone, or the complexity of keeping everyone safe on the freeway with a crane that had to move so much – where I thought, “These might really turn out to be disasters!” [Pause.] Thankfully, with Linus and his team there was always a solution to every problem.

For example…[Crane operator] Bogdan [Iofciulescu] and [Steadicam operator] Ari [Robbins] were amazing. They just seemed to have this instinctive musical sense that got better the more they rehearsed [with dance doubles]. One challenge for the freeway scene was how the crane could be dexterous enough without impacting the safety of the dancers. And we discovered during the dress rehearsal that a different crane head [Oculus] would help in that area. Often the brunt of the day – in Griffith Park, on the freeway, and with the other long music numbers, like Ryan walking on the pier, or their dance in the Observatory – was spent rehearsing to the point where Camera was a well-oiled machine and Linus and his team had worked out all the complex movements. Then we could bring in Ryan and Emma, like in Griffith Park, where we knew we’d only get five useable takes before the sun went down, and work on performance. Throughout the film, there typically was a moment where I could just literally see it all come to life – the music, the dancing, the camera work, the lighting, the production design, and, I’d think, “Oh, maybe this will turn out okay.” [Laughs.]

You’ve cited French director Jacques Demy, specifically his films The Umbrellas of Cherbourg and The Young Girls of Rochefort, as a major inspiration. Did you include direct frames and compositions from some of those older films? This was a movie about movies in many ways, so I wanted to allow Linus, the Wascos, Mandy Moore, who did the choreography, and other department heads to have fun with that conceit. The final dream ballet, for cinematography and production design, certainly collects everything we loved the most in the history of musicals and throws it all at the wall. But the great thing about using these older movies as inspiration was that none of them was set in a contemporary Los Angeles, which is typically portrayed as much more gritty on-screen. That’s why this was such a location-heavy movie – even scenes that the older musicals would have done on a backlot or sound stage, we wanted to be on an L.A. freeway, or on a pier by the ocean. For the wide shots in the freeway scene, you can see lanes below us moving with real cars! You block out half the screen with your hand and you’d see a documentary about L.A. traffic, while the other half is our dance number, as artificial and designed as you can get.

“I think of Linus as an analog DP in that he likes to use older, traditional processes in new and contemporary ways.”

That juxtaposition was exciting for you? Oh, absolutely. And it’s why I love Linus’ work so much. Better than any other cinematographer working today, in my opinion, he has this uncanny sense of how to find the magic in the real. Somehow his movies feel both gritty and dreamlike, and I think with La La Land, we tried to push that tension to its extreme. For me, that’s what feels so new and different.

Whiplash was all about a jazz drummer, and your main character (Ryan Gosling) is a jazz musician who gives speeches about the purity of that music, and preserving it. Are you on a crusade to save jazz from itself? [Laughs.] I was a jazz musician, or a wanna-be jazz musician, I should say, so it’s less a conscious choice and more just a part of me. I actually wrote La La Land before Whiplash, so the germ of the idea was my collaboration with [composer] Justin Hurwitz, way back when we were college roommates [at Harvard], and jazz was at the core of everything we did. I do feel the great Hollywood musicals had a jazz vernacular at their center, even if they were dressed up with a big orchestral score. And there are many different kinds of music [in La La Land] besides jazz – from 19th-Century classical to the bop Ryan’s character plays in a small combo. I think the same kind of balancing of extremes Linus had with photography was what Justin had to do with music, of which he wrote every note in the film, by the way. Movies, as an art form, are not that dissimilar from music, as they both can reach deep emotional places without needing words. That’s probably why Whiplash and La La Land end with a wordless sequence set to music.

Linus said you had playback on the set and that Justin is actually playing the music for Emma Stone’s solo song, “Audition.” Huge patches of the score, along with, of course, all the songs, had already been constructed before shooting began. In the scene you’re talking about, Justin was playing piano in another room and Emma was singing live [using ear buds]. Or when Emma runs out of the restaurant and down the street, we had Justin’s full orchestral score playing. Hearing the music on set helped Linus time out the camera move, and set the colors and lighting. That’s a luxury we rarely get; Justin composed the main melody before I had written a word of the script.

You come out of a long-standing indie background, with Whiplash being discovered at Sundance. But La La Land is very different. Is it the next evolution of independent filmmaking? I don’t know about that. But the irony here is that I’ve always wanted to make movies that, in another era, would have been studio films. I don’t think we could have made this movie in a classic indie model, where all the financing is cobbled together, as we needed too many resources. Lionsgate had those resources, but they left us completely alone to make the movie we wanted to make. It was this ideal universe – which I would love to repeat – of marrying an indie sensibility to this big-screen canvas. Think back to the 1970’s where so many movies that were made by the studios, and designed for the big screen, were totally weird and idiosyncratic.

Speaking of big screen, would you have made La La Land for another platform – a streaming Web company or an HBO, both of which are producing amazing work? [Laughs.] Not likely. I remain a stubborn believer in the magic of people assembling in a dark room, and images projected on a really big screen. It lends every moment an epic weight and that deliberate shut-off of the world outside, for 90 minutes, two hours, whatever – a finite amount of time is still as magical, to me, as it must have been in the days of the early movie palaces. [Laughs again.] I’m going to cling to that notion for as long as I possibly can.