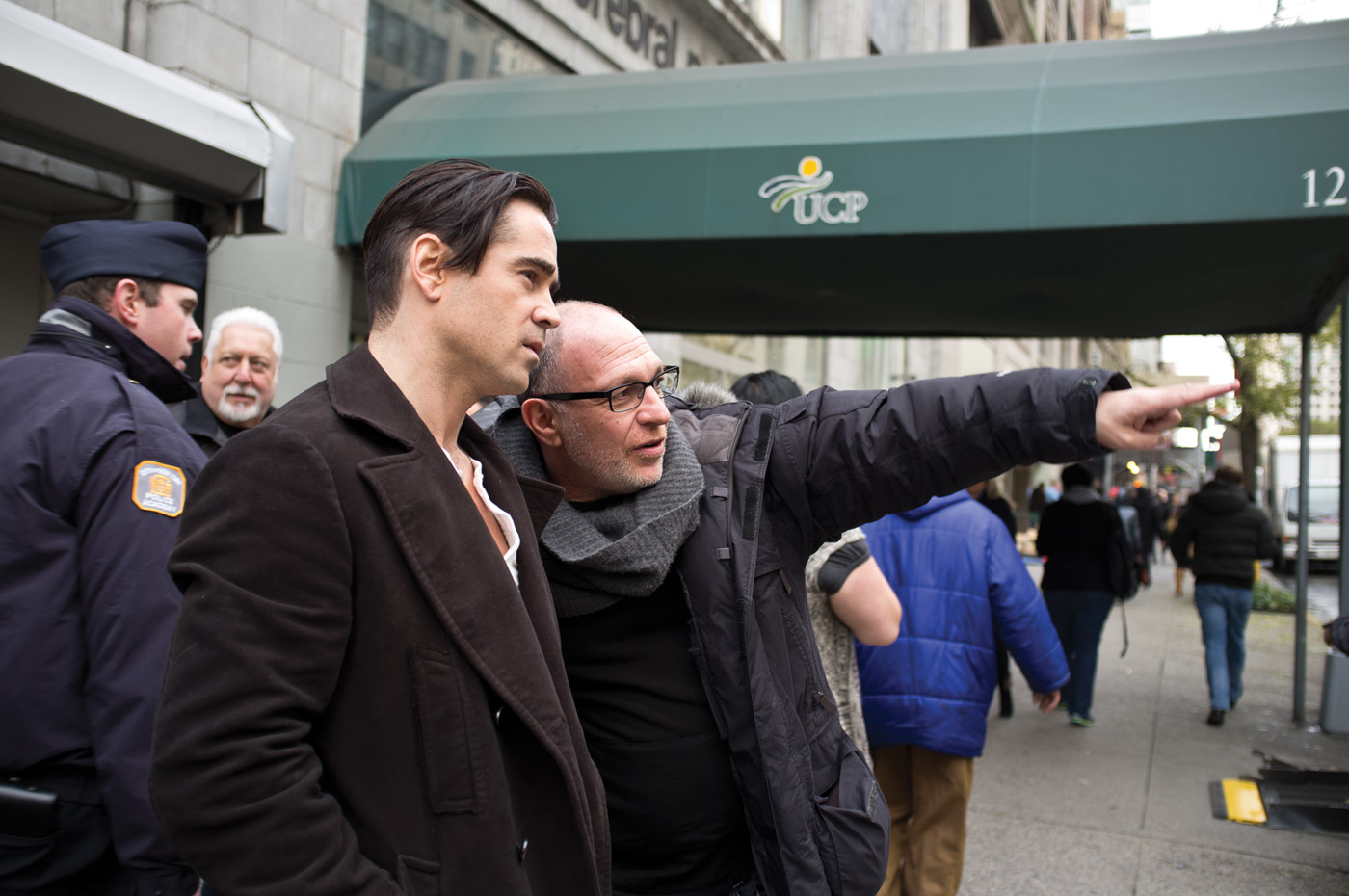 Akiva Goldsman is well aware he has used up a good chunk of his professional currency over the last two decades as an Oscar-winning screenwriter and producer. “God forbid I need [to ask for another] favor in Hollywood; I’m screwed,” offers Goldsman, who called upon long-time professional friends like Colin Farrell, Russell Crowe, and Jennifer Connelly to help bring his feature directorial debut, Winter’s Tale, an adaptation of Mark Helprin’s epic 1983 novel, to life.

Of course, with a résumé that includes A Beautiful Mind, The Da Vinci Code, and I Am Legend, Goldsman’s been on plenty of movie sets. But, by his own admission, dipping a toe or two into directing on the TV series Fringe wasn’t enough preparation for visualizing the grand, big screen magical realism of Winter’s Tale, a love story that spans two centuries.

“There was [no cinematographer] I knew well enough that I could call and say, ‘Hi. Would you like to work for free?’ Goldsman told writer Jennifer M. Wood. “So it really became an opportunity to shoot for the moon.” That star traveler in question turned out to be five-time Oscar nominee Caleb Deschanel, ASC, who, Goldsman says, “any director would want to work with, especially a first-timer.” The self-deprecating triple-hyphenate was in the final stages of post-production when Wood talked to him about the grammar of creation, and why the world will always conspire against your best-laid plans.

ICG: Is directing something you’ve been thinking about for a while? Akiva Goldsman: Yes. I’ve stood next to a lot of really great directors, and somewhere along the way I thought, well, I’ve tried most of the other jobs, and directing seems to be in many ways the most challenging. So I did some “secret” trying on television, and then I tried this.

Was directing Winter’s Tale always part of the plan? I really intended just to write the script. I kept trying to write it, because it’s a novel that I fell in love with when it came out, but it’s an elusive object. I worked really hard to try and wrestle down a third act. Over the course of the years during which I chased it, got it, and then worked on it, it evolved into something I very much wanted to direct. So I switched hats.

Why the choice of Caleb Deschanel as your DP? It goes without saying that Caleb is one of the cinematography greats. And I was in a tricky spot because I was making a movie that was, in large part, a cascade of favors. It’s not a tremendously obvious commercial play, so Warner Bros. graciously said, “We’ll provide support, but at a price.” That’s when I began calling in favors – about 20 years’ worth.

It never hurts to have friends in Hollywood. [Laughs] Yes, there were few salaries paid on this movie beyond Guild minimums. But I had never created any long-standing relationships with cinematographers, in part, because I’m very not good at it. I’ve worked with directors who are tremendously visual and have watched them discuss everything from lights to lenses. And I sat there with a vaguely bemused, slightly stupid look on my face. There was nobody I knew well enough that I could call and say, ‘Hi. Would you like to work for free?’ Which gave me the opportunity to shoot for the moon. So I sent the [script] to Caleb and he said, “Okay.” It was sort of remarkable.

So what’s the ideal director-cinematographer collaboration? I can’t pretend to talk as if I’m a technician, because I’m not. I can talk story architecture until I’m old, but I would have no idea how to create the kind of environments that Caleb creates through light and shadow. What is amazing for me about Caleb is that I can talk with him about mood and story. I can talk about the feeling or emotion of a scene – whether it’s isolated or predatory, if it’s inviting or withholding – and he can invoke that with images

Going in, what did you see as your biggest challenge? Winter’s Tale is an immense tome; it has detours that are novels themselves. So I did that thing one does when adapting a novel, which is I hacked it down to a “more linear narrative.” I’m always going to be telling a story first, so my challenges will always be more narrative than filmic. If I can get somebody with Caleb’s eye and other people with the talent I worked with – the actors, the costume designer, the production designer – and I can get out of the way, something lovely will happen on film.

This is a big-looking movie, with decadent period scenes and wide New York City landscapes. Did it allow for improvisation, on the part of the actors or the crew? I think a movie like this requires improvisation. You can plan until you’re blue in the face. But unless you have unlimited resources, the world is not likely to accommodate your plans. So even though you were sure that this was all perfectly set up, when you get to the set it is raining, and that thing has fallen down, and that person is sick. With very expensive movies, you can hold fast to your plans because there is virtually limitless funding to bend the environment to your will. But typically, your plans have to accommodate the world. The worst thing you can ever do is not plan. The second worst thing you can ever do is think that your plan is right when everything starts showing you it’s not.

You mentioned calling in favors. Is that one of the ways in which you were able to assemble such a phenomenal cast? Russell [Crowe] and I have worked together on three movies and this is my second movie with Jennifer [Connelly]. Will Smith is secretly in this, and he and I have worked on three movies; William Hurt and I worked on Lost in Space together years ago, which both of us try not to reveal. Naomi Shohan, the production designer, did I Am Legend and Constantine; [costume designer] Michael Kaplan goes all the way back to I Am Legend and Mr. & Mrs. Smith. Literally I called anyone who was talented and nice enough to remember me, or of whom I have Polaroids I was keeping off the Internet. [Laughs.]

You experienced early success writing movies like The Client, Batman Forever, and Batman & Robin. Yet you’ve been very open about the fact that the work you were doing was taking you away from your original goals. How did you find your way back? It’s really important to know when you’ve fallen down. There’s some idea, which we all have, that once we start to become successful in any way that we should keep being that successful or else we have failed. I remember watching a documentary on Frank Sinatra, who, for me, defined success. [The film talked about] how he had built a wing of his house for the Kennedys to come and stay. And when they didn’t come because Kennedy’s advisors said that Sinatra had too many alleged mob connections, Sinatra became despondent!

So success in Hollywood amplifies that. Absolutely. Every day you are exposing yourself to criticism that would never occur to anybody else. And in Hollywood more than almost anywhere, you can live in a world of perceived successes and failures, because everything is externally reinforced. Joel Schumacher once called it “high school with money,” and it’s true. It’s everybody seeing each other reflected in everyone else’s eyes constantly. And you will never be beautiful in everybody’s eyes for your entire life. So just try to be beautiful in your own eyes and those of the people you love and that will help you make creative choices. Those will be the choices that matter to you and that you’re most likely to succeed at, because you’re going to be better at something you love than something you don’t. Nobody teaches you that.

How does Winter’s Tale fit in with your goals as an artist?  Without getting into too much detail, I’ve had a lot of loss in my life. And Winter’s Tale became the thing I needed to do the most. And it is the single thing of which I’m most proud as a creative endeavor. As such, it’s of tremendous meaning for me. And I hope it’s meaningful to others.

As a screenwriter and producer, you’ve had the chance to watch great directors at work. Who has taught you the most? I probably learned the most from Ron Howard, who is the most wonderful, collaborative, and decent human being on the planet. Literally, everything you think about Ron Howard turns out to be true. I spent the first six months of knowing him thinking, “Dude, when is the other shoe going to fall?” [Laughs.] Ron taught me how to engage in the idea of true collaboration, and trying to turn a movie into a sort of creative summer camp  – my words, not his – where everyone is trying hard to be part of something wonderful in a community that is dedicated to the creation of something that will convey emotion. Just being on a movie set of Ron’s is a wonderful job, in any role, and he taught me that that is what movies should be. And, of course, there’s also Joel Schumacher, who gave me my first set of jobs and taught me that words are a department too, just like costumes and production design, that somebody should be in charge of them in the same way that you’d have somebody in charge of the lights or the sound.

Are you ready to hop back into the director’s chair? I’m ready to take a nap! There were many things I thought I knew about directing that I did and many more things I thought I knew about it that I didn’t. I have yet to have this movie come into the world, so that’s when this process will be over for me. Right now it’s still alive, organic, and finding its way. But it needs to step out into the light. Once that’s done, and I’m sitting in my kitchen and I hear something over my shoulder and it’s the movie on HBO, then I’ll know.