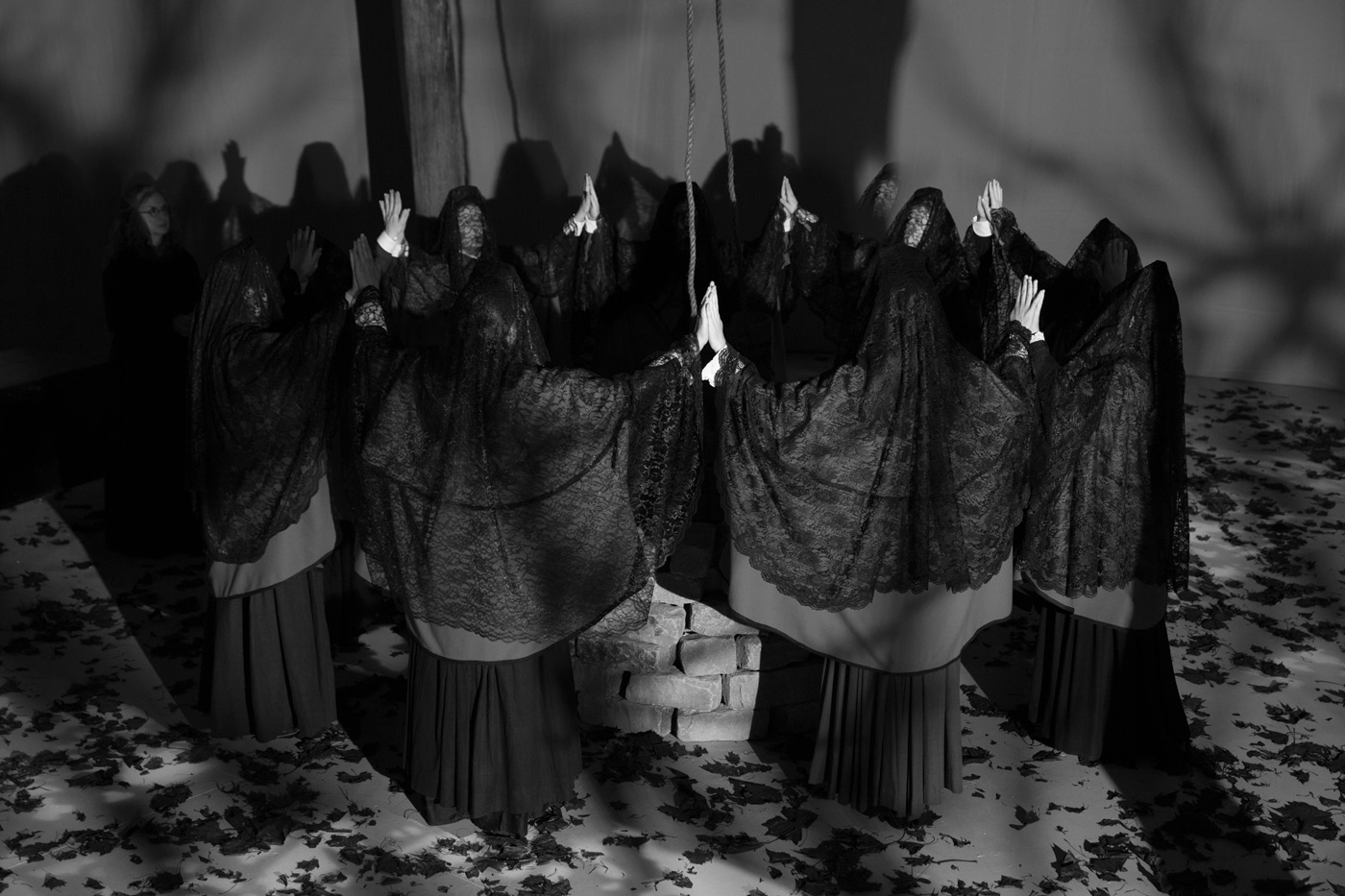 Think back to the days of finger-painting. There were no rules about how to slap the gooey paint on the paper; no one told you what colors, shapes, or even which fingers to use. It was pure creativity, unleashed. And anyone who has seenAmerican Horror Story (what Entertainment Weekly describes as “TV’s craziest, creepiest, cult hit”) can make the on-screen connection to a childlike creative autonomy that defines the show’s production processes.

FX (a division of FOX Television) was already known for programming highly stylized, boundary-pushing shows like Rescue Me, Sons of Anarchy, It’s Always Sunny in Philadelphia, and Nip/Tuck – the latter also created by American Horror Story executive producers Ryan Murphy and Brad Falchuk. Which is why for the past three seasons – beginning with Murder House, then Asylum and now Coven – Michael Goi, ASC, has called American Horror Story his playground. Goi, who joined halfway through the first season after a scheduling conflict arose with the original cinematographer John Aronson, says “there’s no such thing” as conventional coverage on American Horror Story, which began at Paramount Studios in Hollywood and now calls New Orleans home.

“There’s always some weird visual aspect I’m going for,” shares the former ASC president, who has 10 different cameras at his disposal. “I never settle comfortably into just doing a master, overs, then close-ups. We’re always trying to push the envelope.”

Goi cites a recent interview by one of the show’s stars, Emmy/Golden Globe winner Jessica Lange, where she said he was not so much lighting the sets as visually tapping into the mental state of the characters. “I’d never heard anyone describe it that way before,” he responds. “But that’s exactly right, because when I start thinking about how I want to light a scene, it all comes from the script and rehearsals with the actors. I get into the character’s head and think, ‘Even though this might be a sunny day, this person is walking around ready to kill someone! My cinematography becomes a reflection of that character in the world, rather than how the world appears.”

To get into the horrific world of AHS, it takes a team of creative thinkers with strong technical abilities, because as Goi says, “art cannot be created in a vacuum.”

He says the trust that’s been established between himself, the crew and the actors over the past three seasons revels in the collaborative atmosphere that Murphy and his producing team have fought hard to preserve. Goi will text the EP an idea from the set and then soon after receive a go-ahead. Another swift collaborator is gaffer John Magallon. “No matter how radical the idea is,” Goi insists, “John will always follow it to the back of my head and begin to fill it out with his expertise.”

Magallon, who met Goi on ABC’s Invasion in 2005, thinks one of the best things about the Chicago native is that he doesn’t micromanage. “Michael never tells me what light to use or what diffusion to go with,” Magallon describes. “He just says he wants it soft or hard and allows me to go off and do it.”

Both Goi and Magallon subscribe to the minimalist theory of lighting, where each time you add a light, you add a potential problem. Oftentimes they’ll only use a table or desk lamp with a higher-wattage bulb, as in a recent scene from Episode Four in Coven, in a bathroom with cameras coming from all angles. With nowhere to set up a light, Magallon used a 250-watt bulb over the sink. “Because we shoot on film, we’re able to do things like that because the stock’s latitude is able to handle it,” the gaffer offers.

Goi recalls having a conversation with FOX executives before the second season about why shooting film [much like Glee] was an integral part of the show’s aesthetic approach. “I probably didn’t even know myself what that meant at the time,” Goi laughs. “But during the course of the season it became more clear. We used so many different types of stocks and manipulated them in so many ways with all these different looks that there was no guesswork when it came to post or color timing because everyone knew it was supposed to look just how we shot it.” As season three approached, Goi says he didn’t even have to convince FOX executives to keep shooting on film.

“The studio has been extremely supportive of [Murphy’s] creative vision,” says Dante Di Loreto, President of Production at Ryan Murphy Television. “There are a lot of arguments to consider shooting digitally, but it was important to all involved to shoot on film. We look at every aspect of the show, of what we can do to make the show fit within the resources we’ve been given. Whatever cost or efficiency arguments were made for shooting digitally, they put Ryan’s creative concerns first and [stuck with film].”

Goi and his crew have used Kodak Vision3 500T 5219 and DOUBLE-X Negative Black & White 5222 paired with three Panavision XL2s, one Arriflex 435 Xtreme (with a timing shift box to offset phasing), an Arriflex 235, and two Arri 2C hand cranks, in various combinations. For their two Arriflex 16SR3s and one SR2 hand crank, they use Kodak’s DOUBLE-X Negative Black & White 7222 and 500T 7219. Last season, Goi fell in love with Kodak EKTACHROME 100D Color Reversal Film 5285, which was discontinued in December 2012.

“I was able to track down the last 15 rolls in existence,” describes A-camera 1st AC Brice Reid, whose father, James Reid, is the show’s A-camera/Steadicam operator. “They were in Tunisia and they’re very expensive, but the beautiful blacks and greens that we get are totally worth it. We use it like gold, shooting very limited amounts for special effects only.”

Like the opening scene of Episode One from Coven, in which the audience is taken back to the infamous witch hunts in Salem, Massachusetts, before the dawn of photography.

“Alfonso [Gomez-Rejon, one of the half-dozen rotating directors for the show] and I talked about magic lanterns and glass slideshows from the 17th century,” Goi explains. “I’m also a silent cinema fan, so I decided to give it a distressed black-and-white feel.”

They used the SR2 hand crank paired with the 7222 stocks, forced processed two-stops. Goi also used the discontinued Wilson Supra-Frost filters “to mush up the contrast a little bit since pushing the stock would add a little more.” Panavision New Orleans helped design an iris to create that vintage look of the black circle seen in silent films.

“It’s a real organic process on this show,” Goi adds. “There’s nothing set in stone that you can’t embellish or add to bring a new dimension.”

Goi’s method for enlarging those dimensions is through visual references. Along with a large collection of films dating back over the last century that he uses for inspiration, he says Nan Goldin’s still photography had a large influence on Coven’s look.

In episode six, The Axeman Cometh, the character of Axeman (Danny Huston) was heavily influenced by the feeling Goi got while watching Fritz Lang’s M. The first seven minutes of that episode came directly from that movie. “We shot it all on 5219 with the XL2s using the 10-millimeter Primo lens a lot and longer lenses as well,” explains 1st AC Reid. “We framed a lot on shadows and actors and kept a fluid Dutch throughout the scene. I was pulling focus on a split diopter shot as Axeman’s silhouette entered the room to axe the young girls. During those seven minutes, the blacks and the low light helped us tell the story, which worked well juxtaposing the flames from the fireplace as they ignite, taking you into the next part of the scene [where the girls turn on him].”

For Coven, Tom Houghton, ASC, was brought on to split duties with Goi, shooting every other episode since September. Houghton has the creative freedom to expand where necessary, keeping Goi’s previously established looks and concept in mind.

“It’s a fun and unusual ride, attempting to interpret emotions with the camera,” Houghton describes. “We use in-camera tricks like cranking the camera and reversing it with the same roll, creating double exposures with zoom lenses. And because we’re on film, we’re able to maintain the exposure range of windows and practical lights. Like on my first episode with a scene that takes place in a tattoo parlor with a full-length window on the outside, I was shooting about T4 inside and the window read about T22. But the detail was held and looked natural with no extra ND on the main window needed.”

Since the series employs guest directors, Goi remains the constant key creative on set with the rest of the crew. “Some directors come in with really specific ideas,” the DP explains, “and some come in with just a notion. A director like Michael Uppendahl has a definite plan, but he’s always looking to us for suggestions as to how to improve things. The way we play off each other and keep raising the stakes is refreshing. I don’t want to shoot anything the same way I’ve shot it before, especially if it takes place on the same set. A rotation of directors helps break any comfortable routine.”

Magallon says visual complacency is rare when working with Goi. “Maybe he’ll want a 360-degree shot with our go-to fisheye, the Panavision Primo 6-millimeter lens,” he says, “and there’s no place to put a light. So you just roll up your sleeves and figure out how to get it done. It’s a beautiful thing to work with someone so open to lighting outside the box.”

Their approach to lighting in season three, where the main interior location is an all-white mansion built at SecondLine Stages in New Orleans (with the exteriors split into two locations: the front is a mansion in the Garden District and the back is actress Jennifer Coolidge’s house), was to light from outside the windows. With the 10-mm Primo lenses used about 45 percent of the time, it’s hard to have lights inside, and with the hard ceilings they tend to treat it more like a location than a stage. Fifteen- to 40-mm zooms make up the 45 percent, with the last 10 percent on a 6 mm.

“With those wide angles you can see everything,” says Key Grip Kenny King, “so staying out of shots is definitely a challenge. We’ve hung a camera from the roof before, shooting in through a window where we rigged pulleys up in the rafters of the stage, running hi-tech lines from the camera plates up across the perms and then back to the floor. We laid track down and a sled dolly, loading them up with sand bags and attaching the lines, which gave me my counter-balance system. With my dolly grips going back and forth we were able to raise and lower the camera, which allowed me to swing it through a window or around the set to get to the director and DP.”

Many critically lauded series find their groove in a few years and get easier to produce the more seasons that elapse. But everyone involved with American Horror Story insists every year is a first season show, and the rewards always surpass the risks.

“Sometimes making this show is a highwire act,” Di Loreto concludes. “Everything we create is unique to that season – the costumes, the scenery, the look and style of the photography. By the time we’ve figured out how to do it efficiently, we’re starting all over again.”