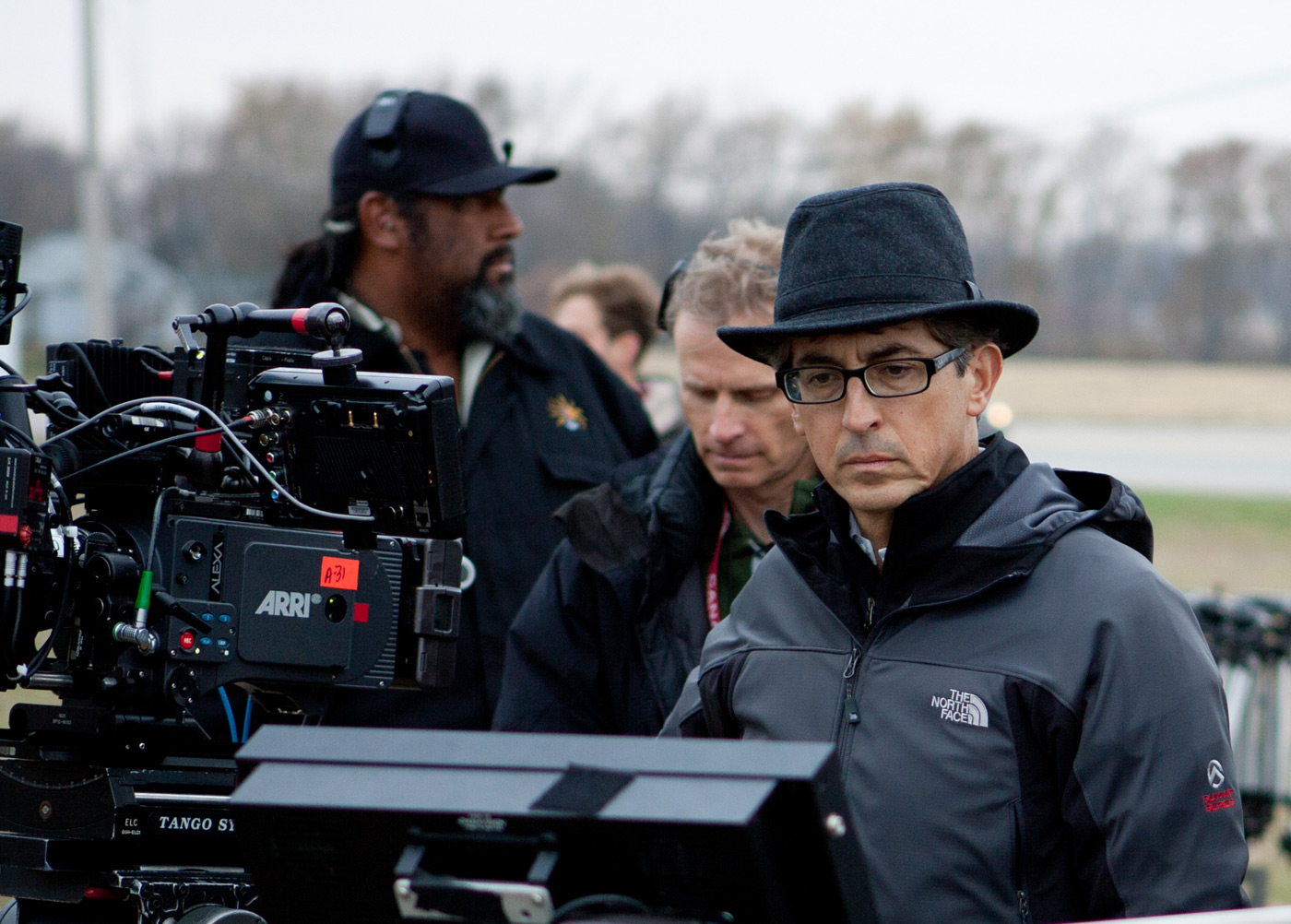 Producer/director/writer Alexander Payne grew up in Omaha, Nebraska in a family of restaurateurs. He was fascinated by cameras at an early age, but his parents’ preference for a law degree put filmmaking aside until after he had earned a degree in history and Spanish at Stanford. Graduate school at UCLA followed, and Payne’s thesis film screened at Sundance and attracted offers from studios and agents. Five years later he released his debut theatrical feature, Citizen Ruth, introducing many of the hallmarks that have come to characterize a Payne film, including a poker-faced blend of comedy and drama and complex characters who are grounded in the real world.

Payne made Citizen Ruth, Election and About Schmidt with James Glennon, ASC. In 2003 he teamed with Phedon Papamichael, ASC, on Sideways, which earned five Oscar nominations, including Best Picture and Best Director. The Descendants brought more Oscar nominations and a second Academy Award for Payne and his writing partner Jim Taylor.

For Nebraska, his third film with Papamichael, Payne says he always envisioned a black and white world amongst the small-town, sometimes desolate locations in Nebraska, Montana, Wyoming and South Dakota, where he filmed. Nebraska was nominated for the Palme d’Or at the 2013 Cannes Film Festival, where Bruce Dern took best acting honors as an aging, obstinate man in dogged pursuit of a sweepstakes prize that may be illusory.

You’ve said there’s a documentary sensibility in some aspects of your approach. What did you mean? Alexander Payne: When I say I have a documentary approach, it means that the milieu I choose, the locations, the production design, the choice of most of the actors, are all recognizable in the real world, and are not from the movie world. It’s a vivid representation of things you know in the real world placed in a fiction film. What you see is more or less accurate to what you would experience, like in Hawaii for The Descendants – it’s a fairly faithful representation of what you would see if you lived there.

Was the decision to shoot black and white on Nebraska a shift from that documentary approach? No. Color doesn’t make anything more real. Think of the gazillion different types of color there are. This is all expressiveness. You can’t dismiss all films made in black and white as being one step removed from reality. In fact, maybe the opposite is true. In any event, we look for representational art to both reproduce and also provide some distance from what we’re portraying. As Dorothea Lange said, “A camera is an instrument that teaches you to see without a camera.” And that can be done in a myriad of ways.

You’ve worked with only two DPs over the course of six features. What do you look for in that partnership? When I pick a DP, he or she has to have excellent professional skills. But I also just need to get along with them. Hopefully what you see on screen is not just a combination of our two heads together, but something greater – synergistic.

So there is a lot of creative give and take? Absolutely. When a director works with a DP, each pulls the other in a unique direction. Phedon’s work is going to be different with me from how it is with any other director, and vice versa. A very good example in film history is John Ford, who worked with many different DPs and had a certain consistent style of pictorial excellence honed in silent films. But the exact nature of his photography differed, depending on whether he was working with Bert Glennon or Gregg Toland.

What are your main concerns, visually speaking? I care about performance first and foremost. So obviously I want a DP who’s going to have a good rapport with actors. And the best ones all do. I also want a DP to be a second eye behind the camera – not just for lighting, but also for performance. The DP is the director’s number-one partner during production, and I’m very happy with my relationship with Phedon. Even though there is consistency in sensibility, Nebraska is very different, visually, from Sideways. And the screenplay dictates all of that. As the director, I have a responsibility to find, through feeling and intuition, a visual style that suits the screenplay.

How do you communicate your intentions regarding tone? Tone emerges organically from the collaboration of the specific people I’ve cast to work with – both actors and the crew – at this particular time in their lives and with this particular screenplay. I get a lot of questions about tone in my films, and usually the questions have to do with the combination of comedy and drama, and the hairpin turns between the two. Tone comprises many different things: rhythm, visual rhythm and rhythm of acting, obviously; nature of lighting; length of shots; and of course, the success of the screenplay. But it’s hard to say how that occurs. As the French say, “le style c’est l’homme même,” style is the man himself. You can’t avoid your own style.

How carefully do you plan the visual strategy? I’m very much interested in storytelling where the camera is well placed, where the blocking of the actors and the gestures and facial expressions that the actors use all combine to tell the story visually, as well as the dialogue, or even the voiceover, as I like to use. Of course, choosing between a 35- or 70-millimeter lens makes a difference. But it’s less important than who the actor is and what the screenplay is. I suppose I want to control what I can with my collaborators, but also allow in whatever the film gods bring to me on that particular day. It could be like, “We did shot/reverse shot yesterday on a completely different scene, so let’s do it in a long take.” It’s only a movie, after all, and the point is to have fun.

Does it ever get difficult to keep that inner tuning fork aligned? Not really. I have my working style, which my collaborators, most of whom have been with me a long time, know. We’re faithful to our aesthetics yet also try to do new things with each film, as our level of experience and the demands of the screenplay dictate. I think a day of filmmaking should be as free and creative as a day of finger painting. A concrete example of that is I never storyboard. I’ve learned to accept things that I can’t prefigure in my imagination and then – again, that word documentary – block the actors and make a well-shot documentary of the scene.

Nebraska is your first digital feature, in part because of the decision to shoot black and white. Are you pleased with the results? Yes, but I still prefer film. Nebraska looks darn good. But I can’t help but think I might like [film] a little bit better, like for some of the highlights. You know how digital gets blown out with the highlights. But it seems like film is going away. I console myself by thinking – and it’s more than consolation, it’s true – that my job is technology-proof. What is the screenplay, who are the actors and where do they stand, what’s the choice of lens, and what are the shots? That job is immutable.

You’ve noted that periods of great cinema have grown out of times of historical necessity, and that you would love to see that kind of a renaissance happen again. Do you see any signs of that today? Not really. I’m blessed to be an American film director, which means I have a consistent industry behind me, even though it’s a hard time for smaller, more personal cinema. When I said that, I was referring to ’70s cinema, when there was a lot going on and you could feel the politics. Even a western like Little Big Man is clearly a Vietnam-era film. But when you consider world cinema, you can see countries with the typical ten-year flare-ups of great cinema. Romania is in the midst of its period right now. Chile is having it to some degree. Asian countries have, in recent years. I hope that Greece does soon because I happen to be of Greek persuasion, as is Phedon, and they’ve been going through a lot of hardship, which may very well show up in their cinema within a few years.

Fred Zinnemann said: “The words and images [in cinema] must sing a song.” Is there a tension in narrative filmmaking between a documentary sensibility and something that reaches a level of poetry? In American filmmaking, you hear, ad nauseam, “Story, story, story. What’s the story? Just cut out that other crap. Just tell the story.” That’s oppressive and actually not the right way to think about film. Yes, the story should be told economically and effectively, and not wander, narratively, too much. However, there’s a complementary quote, which is, “Story is merely an excuse to enter the realm of the cinema.”

Do you have examples of that? Many. The most interesting directors – consider Robert Altman, for example,  – tamp down the narrative to allow other things to come in – visual poetry, the music, whatever form it might take – a sense of mood and a sense of texture to a film, or your word, poetry. In thinking about my films, I would get away from that a little bit. That’s one aspect of them, but hopefully other stuff is coming along, too.

Is an understanding of human interaction the most important skill a director brings? Think of who the greatest directors are. Charlie Chaplin – would you call his visual language highly sophisticated? Is he a David Fincher, a Stanley Kubrick, or an Orson Welles? Chaplin understood comedic and dramatic narrative as something to be told in full shots to allow performance to have primacy, and his films are as effective as any cinema that’s ever been created. Of course, a movie can be anything. But to me, narrative cinema is most interesting when it’s about people. We remember human moments. When I’m on festival juries, I often lament the number of films that are more in love with their own style than with the protagonists of their narratives. There was an Italian screenwriter, actor and theater playwright who said: “He who searches for style finds death. He who searches for life finds style.” I think that’s true.