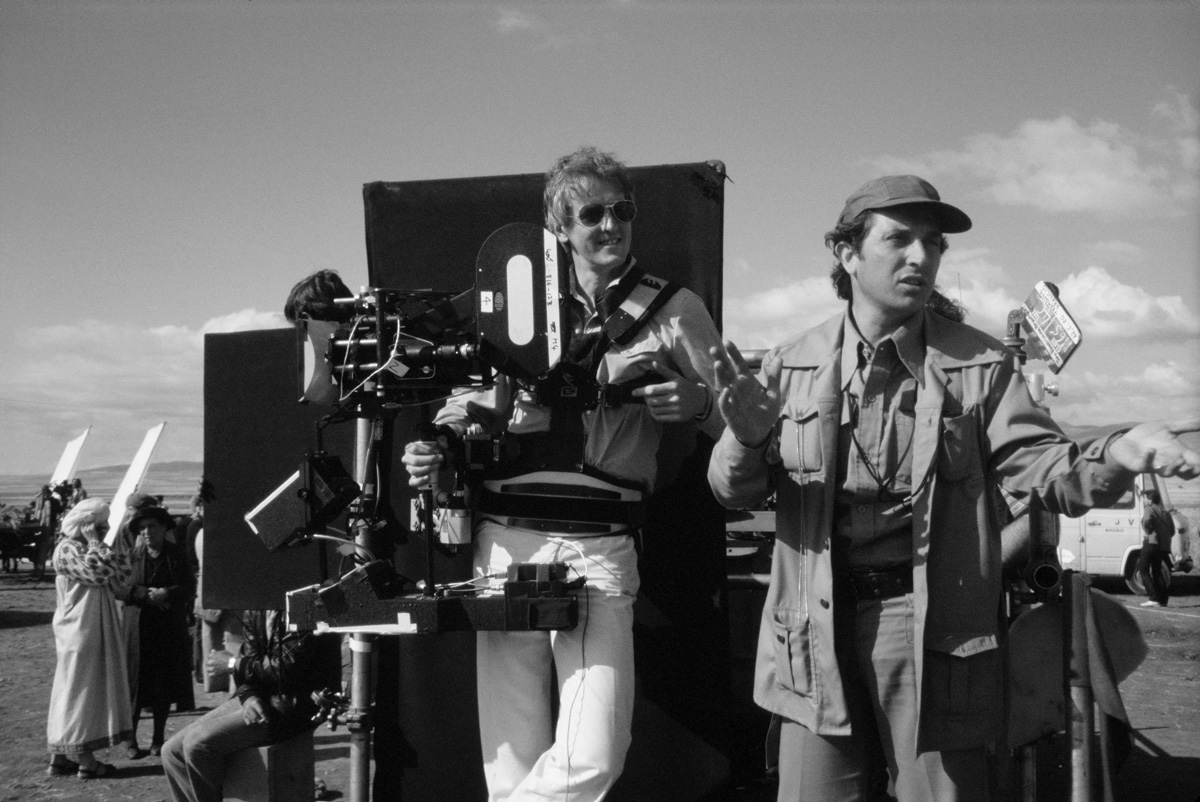 There are a handful of moments in cinema history that changed how we experienced movies, and they typically arrived with trumpets blaring: Al Jolson at the piano in a New York nightclub, Judy Garland waking up in a Technicolor wonderland called Oz, the Millennium Falcon making the jump to lightspeed. But when the camera languidly trailed David Carradine through a dusty, sun-soaked migrant farm camp in Stockton, California, audiences did not know their relationship to cinema had forever been altered. Even today, 35 years after it appeared, the elegiac Steadicam move from Bound For Glory is the most unobtrusive (and perfect) example of technology put to the service of narrative. Watch it again (on YouTube) and see how the camera defies gravity, invisibly floating through the story at hand just like we human beings experience movement beyond the walls of a movie theater.

It was an unlikely debut for its operator and creator, a one-time folk singer and car salesman from Philadelphia named Garrett Brown, who went on to achieve some 50 different patents related to moving-camera technology. Post-Steadicam innovations like Skycam, Mobycam, Divecam, Flycam, Tango and Merlin have only continued to cement the Oscar-winner’s place in film history. This modern-day Wright brother, who retired from operating in 2006 and now spends most of his time inventing and teaching workshops around the globe, talked to ICG editor David Geffner about his many decades giving flight to his craft, and why the human hand of an operator should never be replaced.

The story’s been told before but bears repeating. How, and more importantly why, did a self-taught former car salesman from Philly create the Steadicam? Garrett Brown: I was as much of an outlier in this business as you could be. After my folksinging gig ended, after selling Volkswagens for about eight months, I sold a short story to a science-fiction magazine that netted me thirty bucks! That’s when I decided to read every book about filmmaking in the Philadelphia library – in three months. I built a studio in a barn with used equipment, including, momentously, an 800-pound Fearless Panoram Dolly. [Laughs.] I was the most incentivized person in America to dump that dolly. I was shooting commercials with my spring-wound Bolex with 24-second shots that went straight for awhile, then turned, then straight again because I only had one section of curved track. It was a very peculiar way to move the camera.

And you were no fan of operating handheld? [The camera] is a diabolical object to hold. The center of gravity is buried inside and every bump is tangential to that, except for a bump that is miraculously aimed right at its center. The restrictions on your wrists and hands practically assure that there is no elegant way to handhold that object.

Thus began your lifelong quest to create POV shots that mirror how we perceive the stories that unfold before us. Very much so. The camera inside our heads sees the world as a mobile narrative that is marvelously stabilized. Not as something shaky and jagged [synonymous with handheld]. We only see the world that way under rarefied conditions – being mugged, or in the middle of combat. We can walk into a room with this mind’s-eye narrative camera, and we’re not thinking point of view or something that’s academic or stylized. We’re thinking, What is the story in this room? What I wanted was a way to walk with the camera that would reflect that, to isolate my own motions, and to dump that huge dolly. [Laughs.] Out of those two imperatives, the Steadicam was born.

Not right away. No, I went through a few years of self-financed experiments, each more seductive than before. Finally it came down to a week in a motel going through all my drawings and ideas to assess what I had.

Which was what? A large crane contraption that was not even remotely commercial. It made shots from above the floor to just above my shoulders, rather than floor to ceiling as I envisioned. It had a remotely operated camera on one end with belts and was a nightmare to operate. By the way, I finally attained that truly weightless, floor-to-ceiling freedom a few years ago with the Tango. But it relies on the generation of lightweight cameras heading our way.

Did you come away from that motel with anything usable? The design of a modern Steadicam. The four things that it does were all there – how you see remotely through the lens, which I had envisioned even then, needed to be a monitor, the expansion of the masses, the gimbaling of the object, and then floating the weight of the thing so your fine motor skills were preserved. When I took it to [Hollywood manufacturer] Cinema Products, they looked at me like the kid playing the banjo in Deliverance – an idiot savant, because I couldn’t say things like, “number ten machine screw.”

Who were its earliest champions? Haskell Wexler immediately, and Conrad Hall, who were partners in a commercial company. Connie signed it up for Marathon Man. John Avildsen, who was about to make Rocky, had recognized his former assistant from the demo we had shot in Philly. That demo included thirty impossible shots and it confounded many people, except Stanley [Kubrick], who sent back a telex singling out a 14-frame segment of the film that revealed a revelatory shadow! John [Avildsen] said: “How did you do that and where are those steps?” In the last shot of the demo, I’m chasing my wife down what later became the second-biggest tourist attraction in Philadelphia.

I watched the crane step-off shot from Bound for Glory for this interview, and it still looks amazing. We only did three takes. One [take] was blown because an extra came up and started talking to David Carradine – he had no idea this guy, me, trundling along with this sewing machine was doing anything. I got one more take after lunch that I thought was okay, then hung around like a ghost in the back, watching dailies. The entire crew had piled in to see all this gorgeous footage Haskell had been getting, and when that Steadicam shot came up, the room went completely silent. After it was done, everyone leapt up and began cheering. You don’t get many moments like that in a lifetime.

The Shining was another seminal moment. That was when everyone in the industry really began to understand [the Steadicam’s] potential. Stanley led this monastic existence. We did one scene a day with an endless number of takes – 40 to 50 on average – and we’d study repeatedly before moving on. By Take 15 I was looking for the most subtle and detailed changes in the frame – most of the modern Steadicam techniques I still teach today came out of what I learned on The Shining.

The Steadicam, and all its incarnations, remains an amazingly popular tool. Why is that? I believe that the emotional wallop of a scene can be driven as much by camera operating as by art direction, make-up, acting, music, etc. And I think more than the stabilizing aspect, the Steadicam was and is a wonderful way to move an object through space without the rectilinear constraints of a dolly or a jib, and without the communications of up to three souls to make all that happen. It was simple, elegant and beautiful to watch.

Do you have a favorite shot? Larry [McConkey’s] work on Goodfellas is still my sentimental favorite. But I just saw some beautifully executed intro shots for Downtown Abbey, which is a sign that I no longer even personally know some of our best practitioners these days.

Will the human touch of an operator moving a camera through space lose favor with younger audiences weaned on a diet of CGI moves and effects? GB: I surely hope not because that human presence is our connection to the narrative. The speeder bike chase in Return of the Jedi was effective because the POV was somehow still anchored and terrestrial – I was actually walking through the woods. The CGI boys would have made the trees ten thousand feet tall, and the speeder bike would have been flying at absurd altitudes, like a dogfight. Look at the pod race in the fourth Star Wars film. To my eyes it’s less gripping, yet much bigger in scale.

How did the Skycam and your work in sports broadcasting come about? I was shooting Steadicam for Michael Landon on Little House on the Prairie, and [NFL star] Merlin Olsen was hanging around and was really intrigued. Both of us were bemoaning the distant use of static telephoto camera in football that told the viewer little about the choreography of live sports. On the way home, I had a new scientific calculator and was thinking how could you suspend a camera from wires above the field? I thought if you could keep it flying vertically stabilized and run four wires to the high points of the stadium, it became clear that you could extrapolate any sort of move by taking in or letting out the wires. The only question was how strong would the motors have to be to support these cables?

And the answer… Was very encouraging. The maximum strain on the wires if you went up to seven degrees with a 50-pound camera was 150 pounds, nothing really for a 1- or 2-horsepower motor.

That was 1979, so it gestated for a while? Yes, I recruited John Russell and Larry and a pal who wrote software, and we started doing these little experiments in my kitchen with a key on a thread. We later programmed and built a prototype device and flew it around my old high school, in the snow! It was incredible.

You’ve spent your career trying to overcome gravity. Can cameras ever truly achieve the kind of freedom you envision? [Laughs.] Gravity is a remorseless force that we are all pinned to this planet by. But I am encouraged by these new little four-rotor drone-type objects that have the potential to become completely autonomous, and quite graceful. Not even a wire hanging down or blades whirling around.

That’s the future? Yes, innocent little objects the size of insects that can capture at ultra-high resolutions. I promise you that within 10 years we will have a 4K camera the size of a dragonfly’s eye. It will fly with infinite grace and be driven by the aesthetic force of an operator. We are in for an astonishing time technologically, and the planet we will inhabit will be vastly different than the one of my childhood. Not necessarily better, but certainly different.