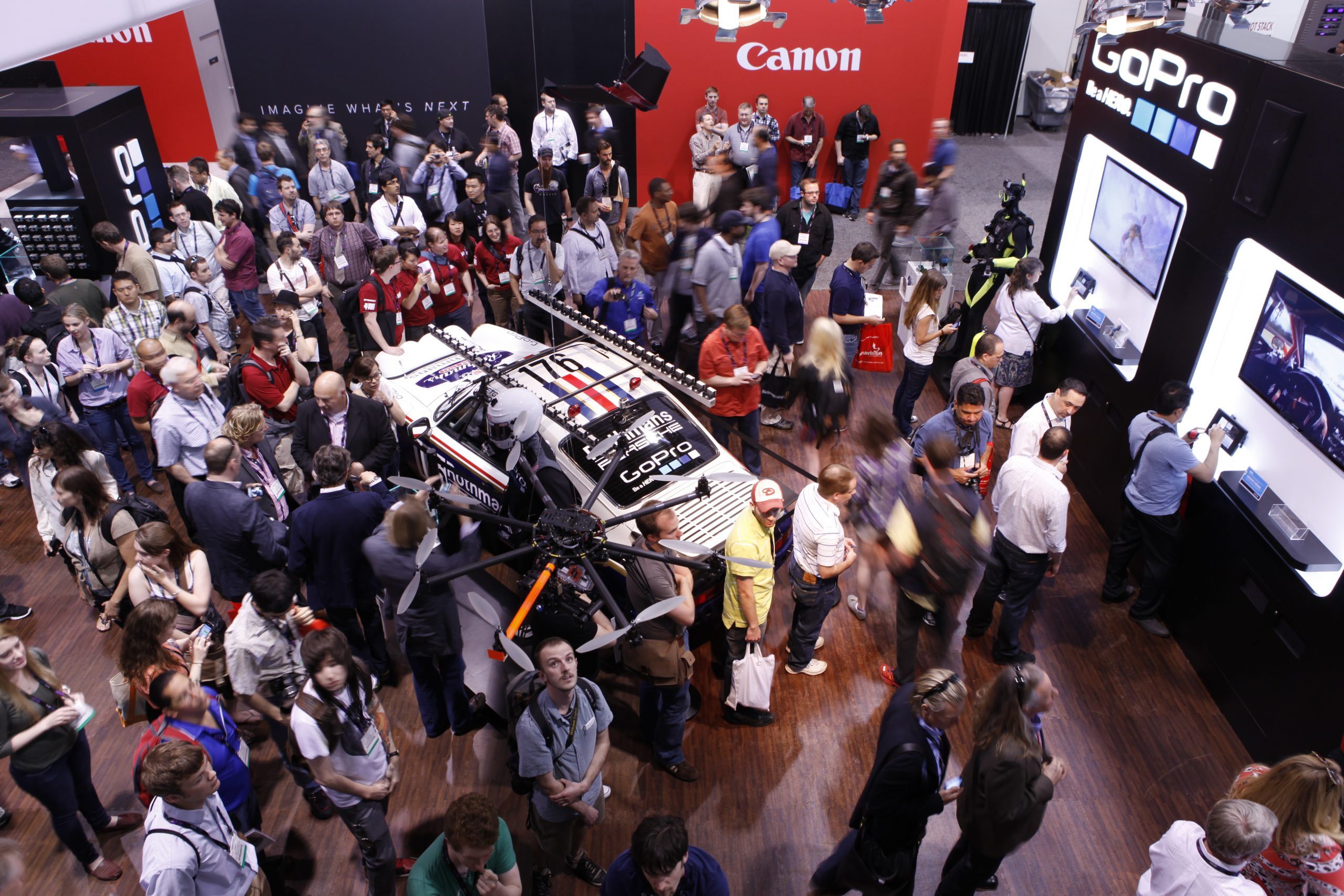 Gordon Smith’s keynote address at NAB 2012, which included remarks that, “only the technologically nimble will survive,” mirrored the “Great Content Shift” theme of this year’s conference. NAB is the largest industry trade show in the world with 1,600 vendors and more than 94,000 attendees representing more than 150 countries.

As Smith, the organization’s president and CEO, explained, broadcasters and content professionals are rushing to innovate to meet consumer demand, aggressively pushing mobile, multicasting and ultra HD as the main link to the end user’s interest.

“I have always heard broadcasting described as ubiquitous,” Smith announced. “Ubiquity yesterday meant a radio in every kitchen and a television in every living room. Ubiquity tomorrow must mean broadcasting’s ability to get to all people, at all times, in all places and on all devices.”

Terrifying or thrilling, depending on your point-of-view, most NAB visitors accepted Smith’s views as inevitable. Certainly, Local 600’s enhanced booth presence and tours of the NAB show floor, led by President Steven Poster, ASC, and Secretary/Treasurer Alan Gitlin, as well as two cinematography-directed panels (among many), provided members, vendors, and friends of the Guild a great head-start on so-called “disruptive technology” that is altering the industry at a furious pace.

“You have to be prepared to start a movie with the vision, technology, budget and schedule that is available right then,” relayed Steve Barnett, VP of feature post-production at Fox during the On-Set Workflows for Features and Television panel, “and then be prepared to leave it on the curb a year later. The workflow we used on Life of Pi at the end of 2010 is now just as obsolete as workflows from the 1980s.”

Such warnings about rapid technological turnover dominated the 6-day convention. And with it came the revelation that all departments are working more collaboratively than ever before. That was the core of the ICG-sponsored panel Two Minds, One Vision, which spotlighted the collaborative process between the director of photography and the creative leads on two hit network television shows.

“The camera department is a world and a technology that no one else understands other than the DP and his or her team,” admitted Julie Plec, executive producer of The Vampire Diaries. “There has to be a lot of trust involved. Dave [cinematographer Dave Perkal, ASC] needs to take my layman’s vision and not only execute it but be able to communicate back to me.”

In fact, Perkal said his showrunner is legendary for her “lengthy emails” notes helping to detail the look of each episode. “It takes a while to get up to speed with a new show,” Perkal revealed. “Understanding the director and the producers shorthand can be difficult. Every word she says I’m interpreting and looking for the meaning, and then executing an idea and in turn looking for her reaction on that.”

CSI: Miami cinematographer Ken Glassing also touched on the benefits of increased collaboration and trust between the DP and the main creative force on a series. Glassing talked at length about his choice to introduce the Canon 7D as a supplement to his A and B cameras (the show had recently switched from Genesis to ALEXA). Glassing said he was looking to implement that ‘breathing-with-the-camera’ technology into the feel of the show. “It allowed us to not just watch the action, but to be a part of the action,” he shared.

“Today’s cameras are so small and have the capable technology, so we can take [a scene like a car going over a bridge] and put multiple cameras in places we wouldn’t have been able to get before,” added CSI: Miami director Sam Hill, who’s done over 40 episodes. “Truthfully, we’re similar to Vampire Diaries in our collaborative approach – this concept of a mini-movie every week. Just about any successful TV show out there is striving to push that envelope, in terms of visual storytelling, as far as they can.”

For the High Octane Filmmaking panel, stuntmen-turned-filmmakers Scott Waugh and Mike McCoy, aka The Bandito Brothers, discussed their almost exclusive use of the Canon 5D Mark II on Act of Valor (which grossed $69.7 million) to capture the stories of five Navy SEALs, using real SEALs, real stunts, and real guns with live fire. Going with McCoy’s mantra of ‘creativity comes from scarcity,’ cinematographer Shane Hurlbut, ASC, Waugh, McCoy and others utilized more than a dozen 5Ds, shooting on-the-fly documentary style. And because of the 5D’s tiny form-factor, the Bandito Brothers were able to wrap post on the movie with no visual effects, other than painting some of the cameras out. Since all the operators were suited up to look like camouflaged soldiers, it was hard to discern if they were holding a gun or a camera.

“Four-and-a-half years ago, all of Hollywood thought we were smoking crack when we said we were shooting on a still camera,” Waugh laughed. “It had issues, as any new piece of technology does. But once we got through the tech issues and Shane pioneered the look for us, it just opened up Pandora’s box. We could move this camera in ways that were just not possible before.”

That type of innovation by necessity was echoed at the ICG-sponsored Spotlight on ICG’s Emerging Cinematographer Awards panel. The 60-minute discussion featured Emerging Cinematographer Award-recipients Cynthia Pusheck, Todd Dos Reis and Patrick Meade Jones all talking about their careers post-ECA’s. And as Pusheck, DP of ABC’s Revenge, described it: “The more confidence your team gets in you and you get in yourself, pushing the visuals further becomes routine.”

Jones, who has DP’d over a dozen shorts in the last five years and is currently on his first feature, added that without experimentation early in one’s career, “you won’t ever get to your full potential.”

“If you don’t fail [in some aspect] of nearly everything you try,” Jones explained, “you’re not doing it right. I had never shot cross-processed before and on Idiot Box (Jones’ 2009 ECA winner) we decided to do it two days beforehand. There are plenty of scenes in there that are blown out because I didn’t know what I was doing. But that informs my process. As long as the people hiring me are happy, I feel okay about taking risks.”

Dos Reis, who bumped up from operator to DP in 2009 on Entourage, echoed Jones’ thoughts about building on the trust of his creative partners. The DP talked about how the visual language of Entourage was first created by cinematographer Steve Fierberg, ASC.

“Steve set it up as a documentary where you have the same limitations that come with shooting a doc – the action just happens, you don’t create it,” Dos Reis reflected. “Over eight years it got more stylized and I tried to make it a bit cleaner. But I think that had to do with using less documentary directors – who were the ones being brought in during the early years – and more TV directors. Either way, I still made sure to keep to Fierberg’s original vision throughout because that’s what made the show what it was.”

When it comes to the vision thing, James Cameron is at the top of his class. Speaking with his partner at CAMERON/PACE Group (CPG), Vince Pace, ASC, in their panel The Secrets of Making 3D Profitable, the filmmaker explained how they were integrating the workflows of 2D and 3D into a new approach dubbed, “5D production.”

“We’re at the crosshairs of two previously divergent technologies, now working on a common platform,” Cameron said about the CPG engineering team who created 14 new products debuted at NAB this year. “We’re able to develop code, FPGAs, all right from the board level up, knowing that it’s going to be advertised across the entire spectrum – cameras, tools, and workflow – because we know we can use it in features, episodic, sports, or live broadcast entertainment.”

Cameron said the ultimate goal was to make 3D un-special; integrating the workflow into a traditional model that uses the same operators, assistants, DPs, and general production strategies, that have long been responsible for the success of 2D capture.

Getting what you want was at the heart of The Brave New World of Filmmaking with Digital Technologies panel, where visual effects supervisor Scott Farrar, ASC (The Chronicles of Narnia, Minority Report, Star Wars: Episode 1 Phantom Menace) talked about his transition to digital from photochemical, recalling the days when VFX were done in-camera and assembled via an optical printer. “I love being in this digitally advanced era,” Farrar said. “But visual effects are still in the Stone Age to some extent. I know you all hear about the fancy software and the tricks we can do, but it is still terribly difficult to get the shot through the whole process – out of your mind and onto that screen.”

Farrar cited the recent blockbuster, Transformers: Dark Side of the Moon, and a prolonged debate about whether to shoot in native 3D.  “We shot a lot of 3D tests,” he explained. “And suddenly you could see all these nooks and crannies [in the Bumble Bee transformer] in such a clear way that it felt like you were seeing something you had never seen before. That prospect excited all of us involved.”

Other pioneers in the “learning as you go” methodology were the makers of AMC’s The Walking Dead. The Creating a Thinking Person’s Zombie Drama panel featured writer-creator Robert Kirkman talking about his pleasure in being able to blaze new paths in horror television, and pushing the visual and thematic envelope of series TV.

“It’s great that AMC is bold enough to put just about anything up there,” Kirkman said, touching on the show’s gore and violence. [Walking Dead’s revolving cast members are often killed off within a few episodes, inspiring “death dinners” before episodes honoring guest actors.] An upcoming third season, airing this October, will provide Kirkman and his team – executive producers Dave Alpert and Gale Anne Hurd, and showrunner/writer Glen Mazzara – with the chance to find out just how far AMC, and the disruptive technologies that swept through NAB 2012, will allow them to go.