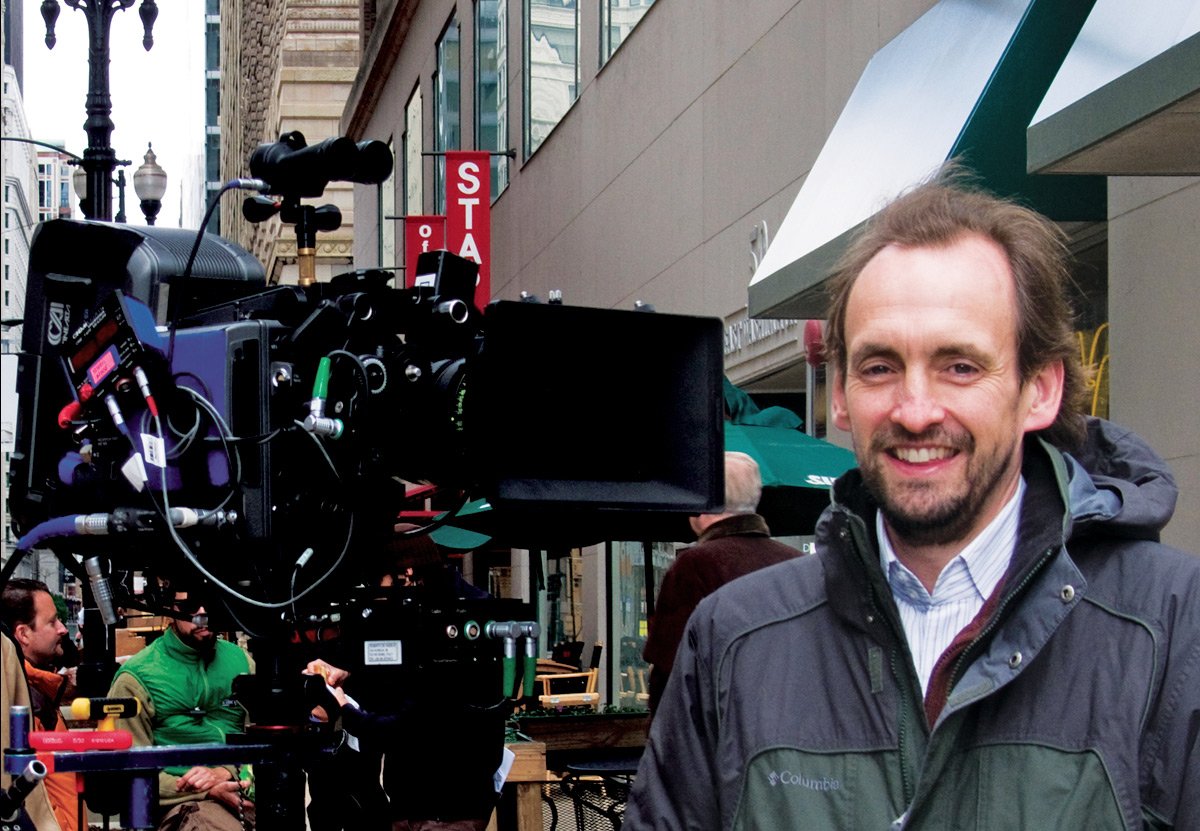 Born in London, production designer Nathan Crowley began his career working as a set designer on Hook and has actually worked far more in the U.S. than in the U.K. He’s been involved on a wide range of projects, moving up the ranks through action, period epic and comedic films like Braveheart, John Carpenter’s Escape from L.A., Mystery Men, and Mission Impossible II. Crowley is probably best known for his four film collaborations with fellow Londoner, Christopher Nolan; those include Insomnia, Batman Begins, The Prestige and The Dark Knight, the latter two earning Oscar nominations for Best Achievement in Art Direction. Clearly, the versatile and talented designer has a way with period movies, whether it’s travelling back hundreds of years in the past to create a peat and fire village in the Scottish Highlands, or decades into the future for the wildly techno-noir Gotham City. It’s no wonder detail freak Michael Mann selected Crowley to recreate 1930’s gangland Middle America: his inventive approach to Public Enemies’ set design included fabricating a removable rubberized cobblestone street and re-welding the steel bars in the dilapidated Indiana jail from which Dillinger made his epic escape.

ICG: What production design challenges did you face shooting Public Enemies digitally? Crowley: The sharpness [of shooting digital] in terms of clarity of image. I had been on other period pieces such as The Prestige, where we used depth of field to kind of wipe out the background where it wasn’t required, and there was still a certain softness present in the quality of the image. With Public Enemies, everything had to be period in the background, and shooting digitally, everything was completely sharp. It’s pulling away from a typically filtered period piece, so I had to be aware of everything in the image. Not that you don’t always have to be, but in most cases, you can have a certain latitude with the background. Here, I had to be aware of every detail. I enjoyed the fact that both Michael (Mann) and Dante (Spinotti) wanted to put a sort of modernism to the image and not create the period film piece that we’ve become used to seeing.

You had a very short preproduction schedule on this film. I didn’t come on board until the week before Christmas (2007). I know the prep time was crunched because we had this potential SAG strike and we had to be finished by June 30th, so we had to back into that. We ended up with 9 weeks preparation, which, especially with the holidays right there, was very short to get to Chicago and get set up. I don’t know if you know Chicago but [the weather] can be pretty hostile in January!

What kind of research did you do to replicate Chicago of the 1930s? I always work with a room of still images and try to put the film up in order visually. And then Michael and Dante would come down and go through it all. I call it “walking the wall.” We’d really discuss everything and the collaboration was incredible. So we find images that are from the period and place them in story order on the wall to give us historical ideas, location ideas, and design ideas. We basically create the film visually on the wall in story order. Then we’d all go together on the location scout.

Others I’ve talked with mentioned a number of period images Mann had collected, particularly showing lighting of the era. Are these the photos you used? Michael had a few key images that he was referring to when I first started, but we did a lot of additional research. Most of our images came from Francis Ford Coppola’s incredible research library, at his Napa Valley winery. In the ‘70s Coppola bought RKO’s library and there is loads of stuff up there. Anahid Nazarian, one of Coppola’s producers, sent me a lot of material that I used for reference. When I did The Prestige they provided me with Victorian London research [materials]. Often I’ll go up there and spend two days just looking around and photocopying stuff. For Public Enemies I didn’t have the time, so I called Anahid and her assistant pulled everything together. I’m surprised more people don’t use them. It’s the best research library I’ve come across.

Do you put these images into a “storyboard” format to take on the set? No. We sometimes scan every image and create a website and basically create our own library so everyone can access it. But once we start shooting, the wall becomes obsolete because hopefully we’ve figured it all out. The wall is only for the planning stage.

Public Enemies shot at a number of locations that were key elements in the Dillinger history. How difficult was it to remove modern elements from these older locations? We started with the Little Bohemia Lodge, in Manitowish Waters, Wisconsin, which is where the big shootout happened between Dillinger and the G-men.  Ironically, that was fairly intact. In some of the rooms they still had bullet holes in the glass from the real shootout! They’d sandwiched the old glass between new panes to preserve the original bullet holes, so we had to take those windows out, being extremely careful, and then put in our own windows in so we could then shoot them out! We literally stripped their windows from two sides of the building, and replaced all the doors. It was a historical place, so the areas we shot up, we gave a second skin. We even added trees in the front because they had widened the parking area. We put dirt down on the ground to cover the tarmac. We pretty much destroyed everything we put in! The tricky thing about the Bohemia location is that the Lodge is still in perfect order, but all around it are huge new mansions, surrounding the lake; we had to go to another lake that was free of architecture for when they escape down the lake bank.

Dillinger makes most his most famous escape from the Crown Point Jail, in Indiana. You actually went to that jail and shot. Was that as pristine as Little Bohemia? No, it was a totally derelict jailhouse. We made the decision to rebuild the jail because it was such a unique escape. The roof was intact, but the place was a mess. All the bars were off and on the ground. Some of the brick walls had fallen down. There were no windows. There was trash and rubble everywhere. We couldn’t obviously sandblast the entire place, but we tried to sandblast as much as we could and then repaint. But you need to be careful. Sometimes you clean places up and they look too clean. So we kept a weathered layer underneath that was really useful. Institutions typically repaint everything with oil paint, so you get this incredible buildup, which I like. Crown Point was a big cleanup job.

So you had to have the brick walls rebuilt? Yes, we had masons rebuilding bits of walls and re-plastering areas. We had steel guys to make all the steel doors work again. We had to re-hang the bar systems that open the doors, re-weld all that together, and make it all function because a lot of it was rusted shut. All the cell mechanisms had gone. We thought it was worthwhile, because the jail had such a strange layout, it would have been a shame not to show it in the film. I like to cheat as little real architecture as possible to enhance the realism of the period. That’s hard to say, because our job in production is to cheat. But I like a film to be grounded in real places.

How long did it take to put Crown Point back together? Roughly four or five weeks – it doesn’t seem that long in the real world, but it’s a long time for a set. We had a lot of people in there. As we started doing it, Michael would come down and say it would be great to use the exterior too. The old garage of Crown Point, where they escaped from, didn’t exist anymore. It had been converted into a carpet warehouse. So we had to cheat that. We shot down the road in a city municipal garage where they store all the trucks that put the salt or sand on the road in winter.

How did you return the Aragon Ballroom to its 1933 appearance? We used the Aragon because it was in good shape. We had to strip out the modern bar. The stage had been butchered; they had cut in a much higher stage for bands, so we dismantled their stage and had to patch up all the lower plasterwork, and then build the original stage, which was much closer to the ground. In our minds it was worthwhile work for the scope. We got a very good-looking location with a reasonable amount of construction.

Considering that some of these locations had other commitments, how did you accomplish the construction under the scheduling constraints? We would prefabricate elements and then go in very quickly with all the bits we needed, having measured and built them in the shop. When you go into locations, where you have to do a lot of stripping out, you prefabricate as much as you possibly can and then you just go for it.

You’ve shot four films now in Chicago. Aside from the winter weather, what stands out about the city for you? The thing about Chicago is that everyone there is so film friendly, it’s always a great place to work. You get to film in some of these great old buildings. They really open the door for film companies.