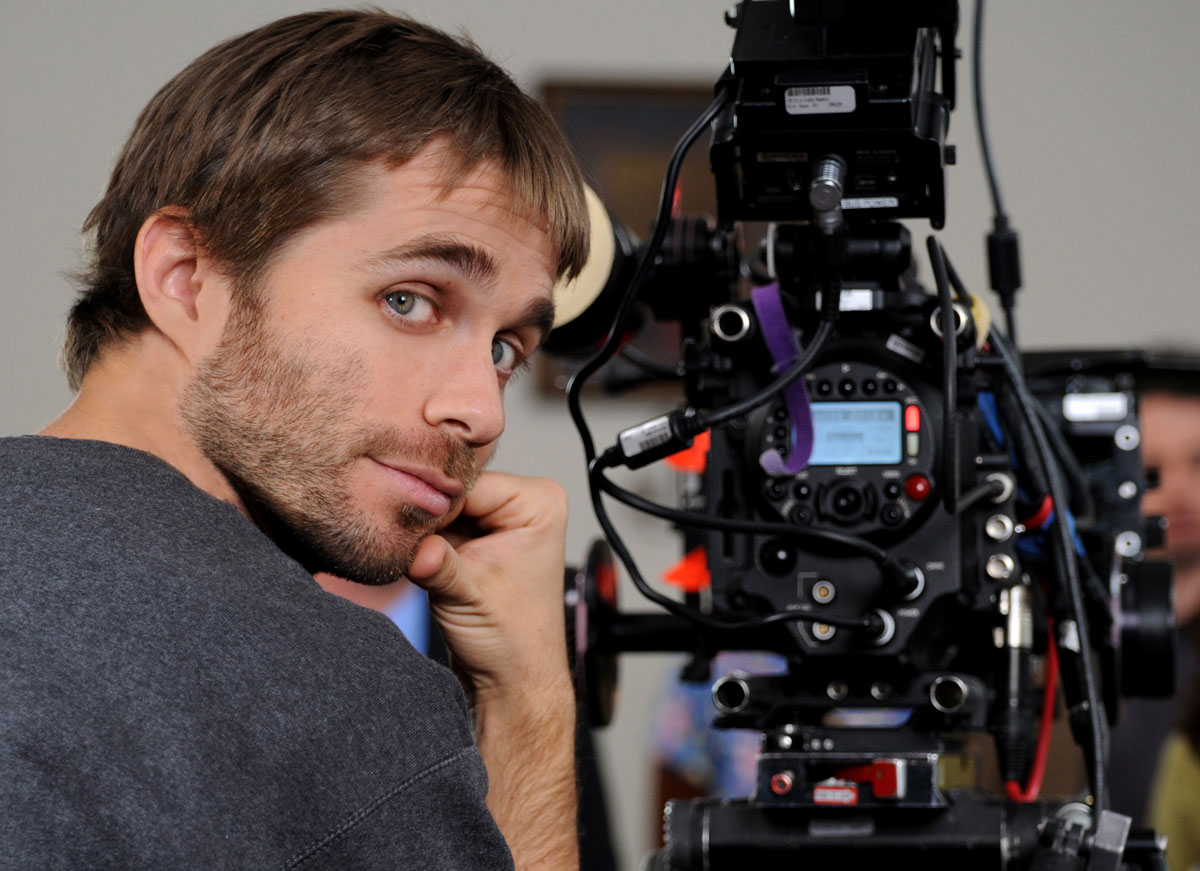 Chalk talk with a class full of Local 600 cinema grads. By Pauline Rogers.

Today there isn’t anything you can’t learn about the newest in movie-making equipment on the Internet. So why go to film school, when high bandwidth and a working knowledge of navigating the Web are far less expensive?

Yes, perhaps the Internet has made the technical path easier. But, as a cross-section of Local 600 members who started out with a film school background and who often teach and lecture at various schools advocate, there is so much more to having a solid career in this industry than studying the equipment on a computer screen.

And there are practical reasons for pursuing the film-school route, as cinematographer Anthony Hardwick (NYU Tisch School of the Arts, 1988) reveals. “Truthfully, those first couple of years out of high school no one is going to take you that seriously out in the working world, so why not take advantage of that time by going to film school?”

Second AC Tracy Facelli (University of Memphis and Watkins College of Art and Design, 2002) echoes Hardwick, noting that she didn’t feel like she had enough experience or skills to go out and earn a living in the industry. “Equipment was much harder to come by, and it was harder to get practice without spending a lot of money,” Facelli recounts.

For cinematographer Paul Hughen, ASC (University of Texas, Arlington, 1980), “no value can be placed on the hands-on experience that is important in learning all facets of filmmaking.” Hughen feels that, even today, one of the best reasons for attending film school is to get an education in film history. He says that not only do students develop a library of favorite films, they’re also exposed to a variety of shooting styles and techniques that could never be replaced by an Internet search – even if some of the shots show up on YouTube.

Jordan Livingston, who joined Local 600 in 2011 as a DIT, says he liked how his time at Chapman University (2000-2004) combined a well-rounded education and the world of film. “When I attended it was a healthy mix of theory along with practical hands-on training,” Livingston shares. “We were still primarily working with 16-millimeter film. And now that my professional career has become completely digital, learning the fundamental technical skills required to expose film is something I’ll never forget.”

Livingston says his years at Chapman provided “access to professional tools and collaborative resources” that he would never have otherwise touched. “My technical background and skill sets were incredibly strong emerging from that school,” he reflects. “And yet despite even that advantage, the political and economic realities of this career path can probably only be learned by actually working in the industry.”

True, but many say the time spent in film school formed the foundation for entering the industry. Or as Matthew Irving, who earned an MFA from USC (1993-1996) observes: “I think it’s become fashionable to downplay the importance of film school, but I found it extremely valuable.” Irving says he “thrived” within film school’s structure and social fabric, and that it gave him many opportunities to shoot. “It’s not [always] about what you learn in class,” Irving adds. “It’s also about developing a social network of peers you can come up with through the ranks. I shared my time with some terrific filmmakers, including [Local 600 cinematographers] Nathan Hope; Cort Fey, ASC; and Byron Shah. We would crew each other’s projects and learn from one another. Film school works best when it’s done in a spirit of cooperation rather than competition.”

Hardwick agrees, noting that the broad range of classes at NYU provided an introduction to many essential craft positions. “In addition to writing, directing and cinematography,” Hardwick remarks, “one of the greatest benefits of film school is that you are given the opportunity to work on a ton of student projects in key crew positions.

“Also, by writing, directing and editing your own films, you really begin to understand the whole process of what it takes to make a film,” he continues. “If you just go into the workforce, PA for a while, and then start working in one craft department, you will learn the skill set of what that department does, but you probably won’t have a great understanding of what goes into the other aspects of making a film. And where else will you get the opportunity to shoot [student films] when you are just starting out?”

Although film memories for Paul Maibaum, ASC, who attended USC from 1972 to 1975, stretch back to a different era, the value of the experience has been everlasting.

“USC’s Department of Cinema at the time I attended was still a relatively small facility,” Maibaum recounts. “The classes were varied, from history to criticism and film screenings. One [perk] was being taught by professionals  ­– I took a class with Blake Edwards and one with John Milius. What a way to learn.

“Would I recommend film school, even in this digital world?” Maibaum continues. “Definitely. It is the only time in one’s career where there is an opportunity to learn more from one’s failures by really taking risks and hearing an honest critique.”

In fact, hearing and accepting creative criticism, in a safe environment, is an aspect of the film-school experience that can’t be replicated on set.

“The most interesting part of the AFI program, and the most useful in my opinion, was the class analysis of our first-year films,” recalls cinematographer Jayson Crothers, who attended Columbia College Chicago from 1999 to 2001 and The American Film Institute (AFI) from 2003 to 2005. “The entire school watches the film, and afterward there’s an open discussion about what you just watched. Then you do the same thing later within your own discipline. After all of your classmates have picked apart the film, your fellow cinematographers do the same thing on a photographic and storytelling basis.”

Crothers says he liked how the process demanded students to think critically about their efforts. “During our first class analysis we’d start to explain why we did something or explain the circumstances we were working under that caused certain decisions to be made,” he remembers. “And it was quickly made clear that all that mattered was what was on the screen. Of the countless things I learned at AFI, that’s one of the most important. The work has to speak for itself. Period.”

Film schools need to stress the work. They also need to have the ability to produce and make that work available. That doesn’t always happen when the school is stretched to its limits. Although things have changed at Watkins, Facelli remembers the challenge of such smaller programs that weren’t, perhaps, as important at the school as they are now. “I had hands-on experience [in the real world of production in Nashville] that most students didn’t have, but there were gaps in the curriculum,” she explains.

“That actually worked to my advantage, as it allowed me to take classes in every major,” she adds. “I could demand to get into classes like ‘Intro to Editing’ or a directing class. But I often had to go outside the school for experience. I made good friends, many that I still currently work with on shoots. But I also think it was the simultaneous real-world training that contributed to film school’s being such a good foundation for me.”

Facelli has kept in touch with Watkins teachers and mentored film students in the Nashville area who are now working in the industry. She says Watkins has streamlined its program, “and the quality of work coming out now is much better than when I was there. The faculty is much more qualified and now includes Local 600 operator Ron Coons.”

Returning to their alma maters as teachers is something many former Guild film grads do. A great example is cinematographer/teacher Tal Lazar at AFI. Although he was a working Union camera assistant in his native Israel (with a BFA from Tel Aviv University), Lazar went “back to school” when he came to the States.

“It was a conversation with a production designer back in Israel that made me decide,” he explains. “He described his process of working with a cinematographer, the information he requests and the types of discussions they have. These included technical discussions about the nature of optics and photographic processes, as well as artistic discussions about the interaction of color and contrast. I was confident in my abilities at the time, and yet I suddenly realized that I was unable to have a conversation at that level. This started me thinking about AFI.”

Lazar found what most students realize is a key point to success in this industry: “to learn to collaborate within a team and to be flexible when the unexpected occurs,” he observes. “AFI [and other film schools] teach classes that range from hands-on lighting seminars to lectures about optics, visual elements, video technology and more.” Like Crothers, Lazar says the high level of critique is good industry preparation.

“The most interesting thing to me is the intimate discussions with guest cinematographers,” Lazar adds. “Every time I have a car in the frame, I think of Bill Bennett [ASC] and the techniques he taught us about shooting these highly reflective surfaces. Or, when considering where the fill light should be placed, I remember Bill Pope [ASC], who demonstrated different fill techniques. It’s also reassuring to find that your role models are struggling with the same questions that you have – or that they feel confident enough to share a trick or two.”

Sharing a trick or two is something that Lazar is doing himself these days.

“I was a vocal student and never hid my dissatisfaction in a class or teaching method,” he smiles. “The fact that Stephen Lighthill, ASC, offered me a teaching position was the perfect ‘punishment,’ and I accepted the challenge. When I stand in front of the class, I stand in front of cinematographers – not students.

“I like to joke that I never left AFI,” he continues. “As an instructor and alumnus, I get to see the program from both sides, and I believe that it’s now different, and better. Technology advances in the past 10 years have changed the curriculum. A film school needs to follow the changes but also have an element of leadership to try to steer the industry in a positive direction, not unlike the Union in many ways.”

Lazar constantly sees AFI graduates on campus – at screenings, lectures, and at the library – and feels part of a community. “I sit with my students and make it clear that I am not an instructor now, I’m a graduate who comes back to learn. And I try to lead by example,” he states. “A cinematographer is a leader, and as such he or she needs to have an intimate familiarity with the equipment and work in the different departments. A cinematographer is also an artist, and therefore should perhaps have a set of experiences or knowledge that go beyond this craft.”

While Lazar, like many DPs polled for this article, believes in a “formal film education,” he also says “going up the ranks” is key as well.

It was the combination that worked for me,” Lazar concludes, echoing Facelli’s experience at Watkins. “It is no longer about the equipment as almost everyone owns high-quality cameras. I believe it takes patience and hard work, a lot of listening and observing, until the moment comes when you realize: ‘I know this, I can do it.’ And, even then, you sometimes end up realizing that you’re wrong and need to keep learning.” 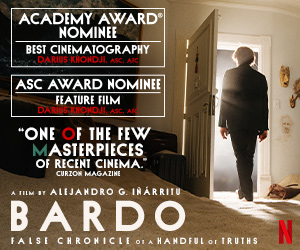 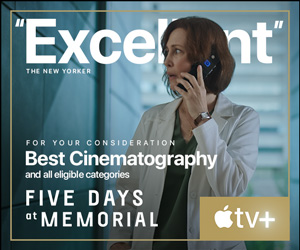 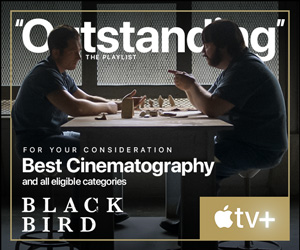 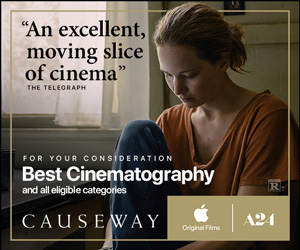