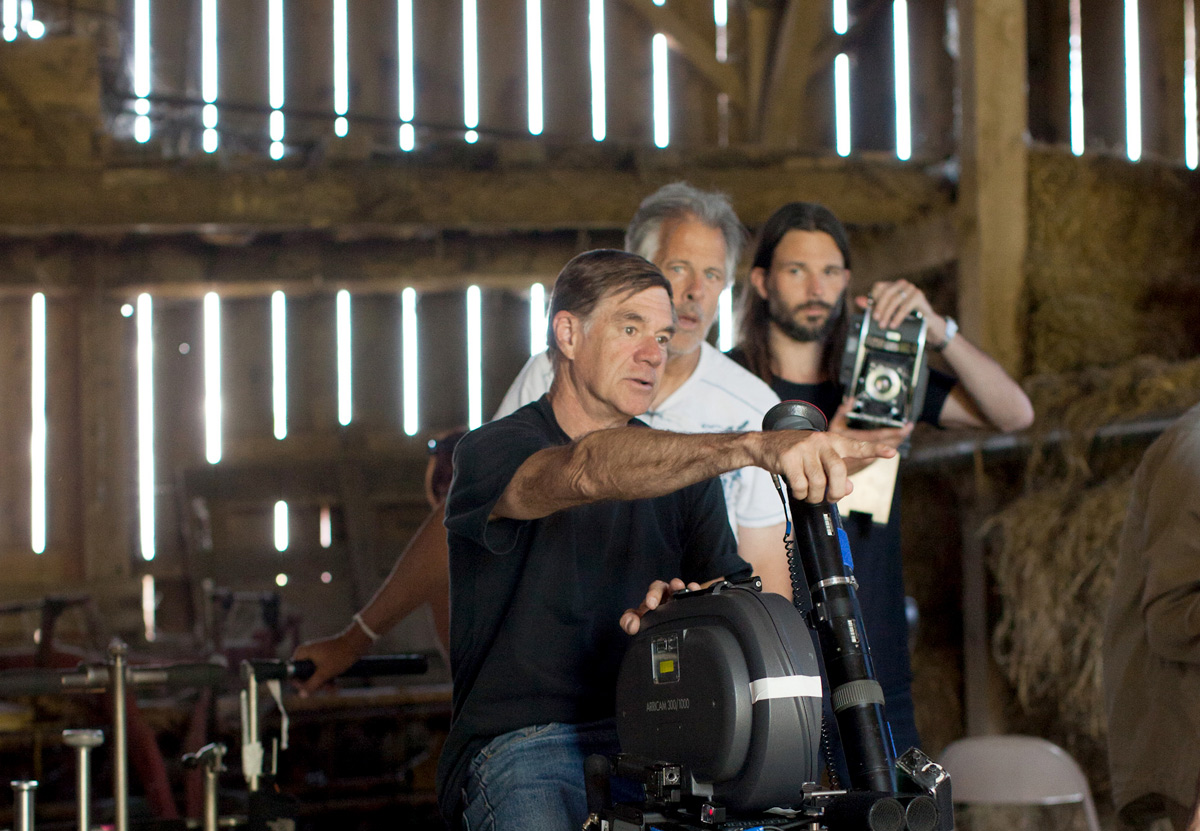 Maverick filmmaker Gus Van Sant seems to switch seamlessly between edgy, youth-oriented indies like My Own Private Idaho, Drugstore Cowboy, and Elephant and studio films such as Goodwill Hunting and Finding Forrester. Then there are the other films that are a little of each, the ones that have a finely honed indie edge but shine with studio gloss, such as To Die For or Milk.

Van Sant is a difficult filmmaker to categorize. He places a high value on giving actors free rein and on visual and technical experimentation, i.e., his use of long roving single takes in Elephant, or his attempt to recreate Hitchcock’s masterpiece, Psycho, shot for shot. Even though he’s worked often in Hollywood, he shows little concern for film conventions. For example, while other directors push the envelope of new digital technology, Van Sant takes older technologies and makes them uniquely his own. He used real 60s-era news cameras for Milk, and on his newest film, Promised Land, teams with cinematographer Linus Sandgren to emulate the look of large-format still Kodachromes from mid-20th Century America. The environmental drama reunites him with Goodwill Hunting collaborator Matt Damon, who co-wrote the script with John Krasinski. Ted Elrick caught up with Van Sant to clue into this modern master’s evolving and fearless approach to moviemaking.

ICG: I watched the Promised Land trailer last night, and I was struck by this line of dialogue: “Two hours outside of any city looks like rural Kentucky.” I know you were born in Louisville. Van Sant: [Laughs.] That is a funny observation.

You’ve come a long way since then. How do you think you have been able to maintain a creative balance between studio and more indie youth films? It’s not a conscious decision. I am sure it’s partly the material I just become attracted to at that particular moment. Promised Land, of course, is not so youthful. But I had been following the project and heard Matt Damon wanted to direct.Then I got a call that he had decided not to [direct]. So I had my eye on it, and after I read the script I realized it was a really great story and I was on board.

One of my favorite lines from Drugstore Cowboy was something to the effect of, “Most people don’t know how they’ll feel one moment to the next, but a junkie just has to look at the labels on the bottles.” A lot of those earlier films were attempts to do something that I didn’t see a lot of in American films. Like in Mala Noche. They were films that seemed to have their own character because of the subject.

I heard you’ll not only shoot a dialogue take, but you’ll shoot a second take, almost like it’s a silent movie. That’s a thing I discovered back on Milk. Sean Penn said he had done films where the director would shoot takes with no dialogue but with the same action. So you have two people walking down the street, say thirty feet, then the director would do the same take with no dialogue. The purpose of that was mostly the recognition that sometimes you really just don’t need that dialogue. You want to preserve the shot in which they’re talking, so you have talking people that are silent and you have music over it, or you have an extra shot where people are just walking.

Was Penn talking about a specific filmmaker? Terry Malick, who uses it in all of his films, most recently Tree of Life. He was using it for his reasons, and we used it for our own. We used it a couple of different times in Promised Land. Sometimes it was just for logistics in that you need to get one character from one side of the set to the other without a particular line you want to say at that moment. You might want to cut out the middle part of the scene or somehow manipulate the writing. So it’s really just sort of a safety net.

How did you decide on Linus Sandgren as your DP? My first AD, David Webb, whom I have worked with on a number of films, had worked with Linus on commercials. We were looking for a DP, and all the people I had worked with weren’t available. So, he just sort of came out of the blue. I liked his reel a lot. We had a meeting and I said, “Let’s go.”

And you didn’t storyboard or shot-list. I will do a shot list on the set, but I won’t do it before we rehearse because the rehearsal can guide you in a certain way. If you already have it storyboarded, you’re already deciding where everybody is going to be, and you’re spending time trying to achieve something and missing something better. So I wait until the rehearsal.

Is that typical for you? I originally started with storyboards, but they became too complicated to execute so I just started to rehearse first and then decide. You sort of figure out where the camera goes according to the blocking, and it’s not that hard to do.

And you used a much more rigid approach when you directed the remake of Psycho, using Hitchcock’s storyboards and sets. We wanted to see if we could actually copy a movie, for which, I think, the answer was no. There will always be the energy of the people making the film, and even if you try, really hard, to recreate that, you can’t really get there. It was an experiment about originality.

Linus said that when the two of you began discussing the look of Promised Land, you mentioned Bertolucci films like Luna and The Spider’s Stratagem. It was in our main concept, and we actually watched as many of Bertolucci’s films as we could find. Even though Bertolucci has a lot of dialogue in his films, the camera keeps moving, and we wanted that combination.

Also Linus had collected a number of photos of what he thought the film should look like, and sometimes they did look like the things I had shot with my digital Leica. I can’t remember what that was. He had a Canon.

Do you have table readings of the script with the actors before production? In this case we didn’t because the actors had written it, so they knew more about it than I did. But I have in the past done read-throughs or rehearsals with the screenplay. [For Promised Land], with certain characters we would go to the location and rehearse to let them get comfortable and work out anything they needed to.

You have worked with a lot of unknowns on this picture, and with local people like actual news cameramen on Milk. In this film and Milk we were successful casting local people. We have always tried to fill roles with local people in many of my past films. There’s a local guy in Promised Land who plays Supervisor Gerry Richards, Ken Strunk, and he’s quite good.

Do you worry about them freezing on camera? We usually test them with a video shoot, so we hire the ones that don’t freeze in front of the camera (laughs).

You chose not to go with a monitor, and that seemed to throw people for a bit. I didn’t use [monitors] back in 1990 [on Drugstore Cowboy] because it wasn’t really something that you did. So for this one, I thought, let’s try and do it like that. Monitors tend to attract a lot of attention, and it makes it harder to work on the set because there’s this other place where you’re working, over by the monitor, so I got rid of it.

You’ve worked with your AD, David Webb, on so many films since To Die For. What makes that relationship work? I think we just became friends and the films were a way to hang out together. It’s a hard job, and a lot of people have a hard time doing it, and he’s one of the few who can just have an easy time because he really likes doing the job.

It’s curious you say that, because when I asked David Webb why he recommended Linus to you, he said, “Because Linus is a fun guy to hang out with, and when you meet those people you want to continue working together.” That’s exactly right. It definitely becomes like that.

Is there new technology that you have been impressed with? I’ve used the Alexa, and I liked it. But Linus and I agreed film still has an edge over digital. I’m sure in a few years it will overtake film, but right now there is still a quality that you are missing if you shoot digital.

Looking back over your films, do you draw inspiration from them that pushes you into other areas? Yes, because after time they start to exist on their own. I’ll move on to the next project, and I’ll see them three or four times, just for enjoyment, then I won’t watch them again. But I remember watching one film fifteen years later and thinking that it was nice the way it had been put together. [Laughs.] I didn’t have objectivity when I made it, so it was so much later that I could see it for what it was, and I thought it was pretty cool.

Speaking of timing and your latest film, a geophysicist speculated that a recent series of small earthquakes in Dallas might be attributable to fracking. We use fracking as a background, but we don’t really get into those types of studies because they’re so new. It’s a very topical subject. But with something like earthquakes, I am suspicious, and like everyone else, I don’t actually know.

But a number of your films have that topical quality – Elephant with Columbine and Milk. It must appeal to you. Definitely. That is something that is pretty great about mass media; it’s a place where things that are topical can be discussed and can also cause discussion.